Proof reveals how it animated 700 shots for the comic-book style finale of ‘The Blacklist’ in just six weeks.

When NBC’s The Blacklist was shutdown part-way into filming its final season 7 episode owing to the coronavirus pandemic, there weren’t too many options initially for how the show might be completed.

However, after engaging previs studio Proof, Inc. to previsualize the remaining parts of that final episode, the producers went one step further and turned the entire ep into a live-action/animation hybrid with a graphic novel style. Proof would now be required to complete broadcast-quality animation for 20 minutes of animation (698 shots); they also only had about six weeks to do it.

To find out how the studio pulled off this epic feat via its London and Atlanta offices – both with artists working remotely – I asked London previs supervisors Adam Coglan and Matt Perrin in a Zoom call to break down the process for befores & afters.

b&a: What was Proof’s brief for this work on The Blacklist?

Adam Coglan: The Blacklist producers had got to a point with the show where they shot about 20 minutes of footage and needed to make the rest of it up. They had seen some of Proof’s work on A Wrinkle in Time, The Hunger Games and Guardians of the Galaxy, and they felt that the ‘cartoony’ style suited the graphic novel style of The Blacklist that they were pushing for.

Matt Perrin: When we initially pitched it, it was very much that The Blacklist wanted to previs half the show. They had to go on hiatus because of the pandemic and they were going to previs the rest. And then within almost the next breath, it was, ‘Oh, we’re going to air that previs now!’. And then it became broadcast-quality animation, but with all the same methodologies we would normally apply. We were still designing the sequences and storyboarding the way we normally would for a previs sequence, but trying to take it all the way through to final render this time. 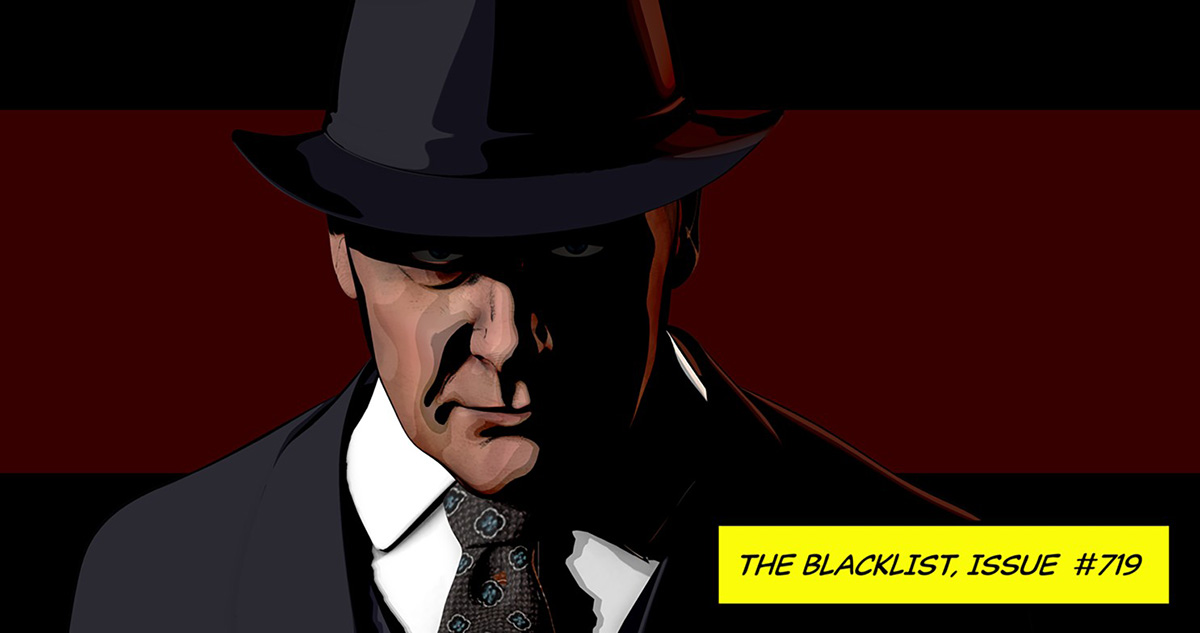 b&a: Did you need to do a proof of concept at all?

Adam Coglan: As far as lookdev or anything like that goes, everything had to be running in parallel because of the time we had. So lookdev, animation, modelling, rendering was all happening kind of at the same time.

Matt Perrin: The producers initially signed off on the toon shader look of some of the previs and then they continued to develop that with us over the whole span of the project.

Adam Coglan: We were animating as we were modelling, so for maybe the first two or three weeks, they didn’t see any characters that resembled their main actors at all. We were just showing them proxy versions of their characters in gray scale. And they were fantastic about dealing with that, because obviously they didn’t know what they were looking at. They totally put their trust in us to explain what the process was.

b&a: How did you approach modelling these characters? How accurate and realistic did they want those characters, given that it was still the toon shader look?

Adam Coglan: The heads were all built in ZBrush and then imported into Maya and then put onto our proprietary rig, the Proof previs rig. For things like clothing, we relied on the standard library that we have for characters. Everything was done in Maya in London and then passed over to Proof Atlanta, who did the toon shading. They would take all the textures, toonify them, and then send them back to us. Then it would go for approval to the clients. We went through a few iterations of characters before we got something right for them. The toon shader look went through a few different iterations along the way.

Matt Perrin: We had a character sculptor, Laura Frasnelli, who worked with us. She made these fantastic likenesses for all the cast and did it in a crazily fast time. Then we applied the toon shader and – boom – suddenly everything was gone. So we said, okay, how do you retain the graphic novel look and retain the resemblance to the actors? That took more work. It was almost quicker to build a previs photoreal likeness than it was to get that caricature version working in the toon shader. Kate Gotfredson would pick up Laura’s models and then she’d work with the shading and texturing. She did a lot of work drawing in lines to define things with pencil strokes, which was quite effective in the end. 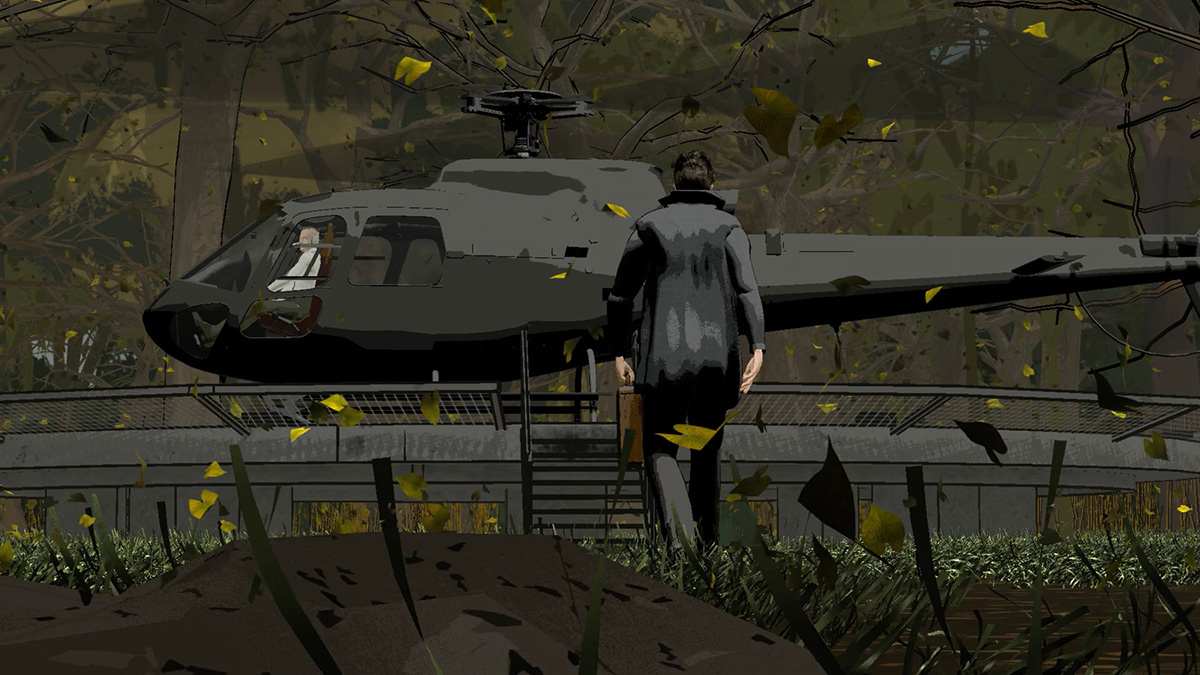 b&a: Was this all original animation, not rotoscoping over any live action?

Adam Coglan: No, we didn’t have anything. There was nothing there that they handed over to us originally. There were no storyboards either. We planned all the staging and camera angles ourselves, and did some initial motion capture.

Matt Perrin: It was a lot of key frame animation. There’s a couple of tiny transitions where there was a little bit of rotoscoping involved where you’re literally stepping between the two worlds on a shot. But on the whole it was all fresh animation.

b&a: How did you end up using motion capture?

Adam Coglan: We’ve got an Xsens suit. So there was one person doing ‘social distancing mocap’ on his own and, it worked.

Matt Perrin: It did. It wasn’t easy to do because obviously it’s a very tactile thing, doing mocap. On a typical mocap shoot for previs, we would map out the floor space and we would have the props and we would try and make the mocap integrate into the virtual space as closely as possible. That wasn’t really doable with a one man band on this one. So it was used more to pick up non-specific movements, like background characters. Most of the specific choreographed animation was key framed. 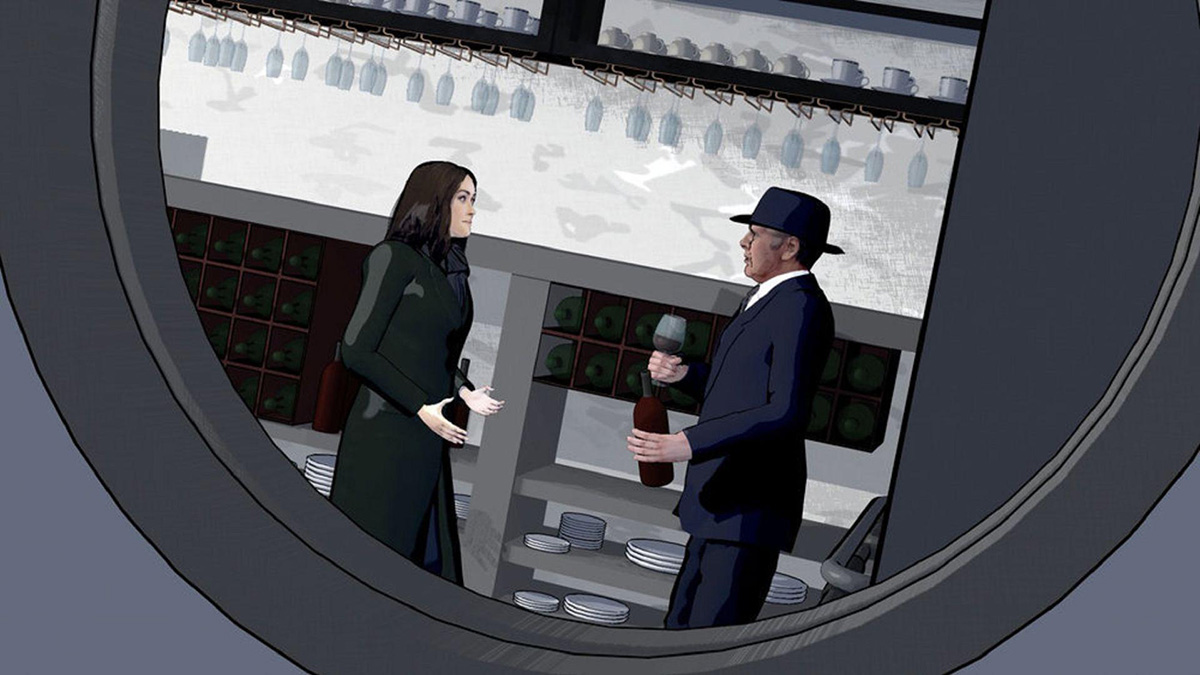 b&a: Did you have a dialogue track to work with?

Adam Coglan: They gave us scratch dialogue that they’d recorded, that the editor and one of the producers had recorded first thing, and then as they recorded the actors we got updated dialogue throughout the six weeks.

Matt Perrin: That scratch dialogue they gave us to start with was really crucial because it allowed us to plan out our scenes and block out and design a sequence to it. And then they started swapping that out with the actual actors. They were really good at listening to what we needed as well. So when we said, ‘We need to start refining, tightening up some of the performance here and maybe introducing lip sync, too,’ that’s when they started delivering the more final performance from their cast. 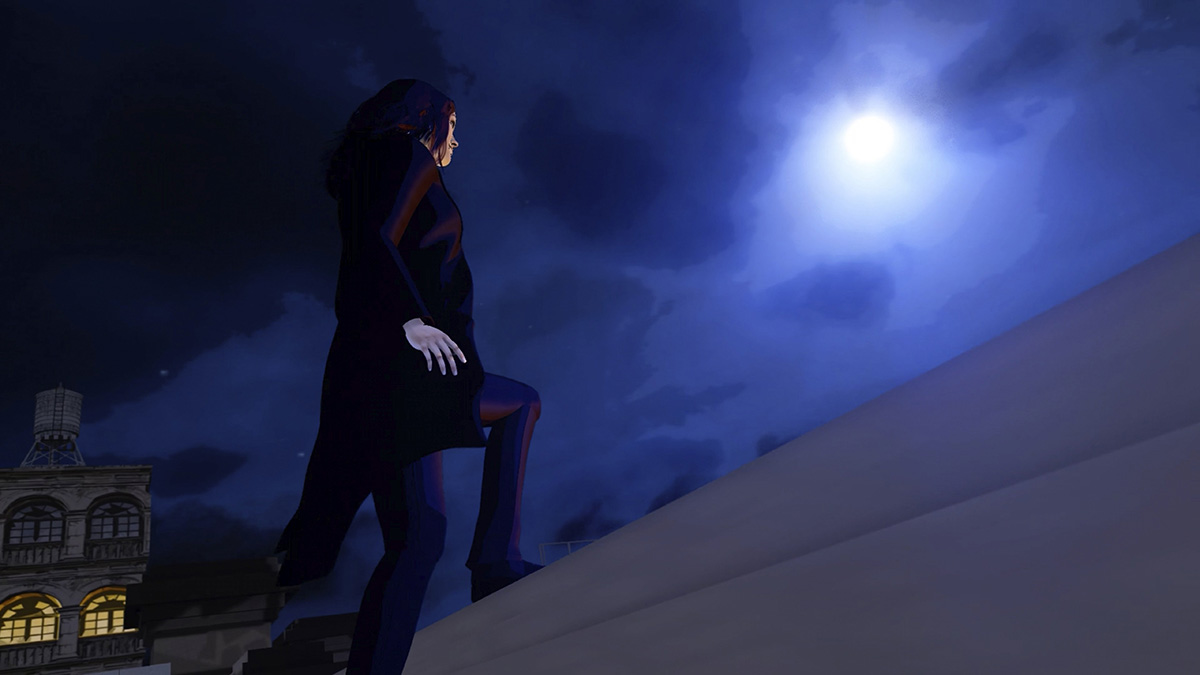 b&a: Did you need to analyze the movements of the actors in order to replicate them?

Adam Coglan: Not hugely. They gave us a lot of reference from older episodes for things like framing and staging of scenes.

Matt Perrin: The producers started finding comparable scenes that they’d shot, because they’ve got 150 episodes of this show now. There are patterns in their shooting style. So they’d find comparable scenes from previous episodes that worked for sequences in this one. I think that particularly with some of the Red character, you’ll notice in some of the key fame animation that there are characteristics that are very familiar with James Spader. 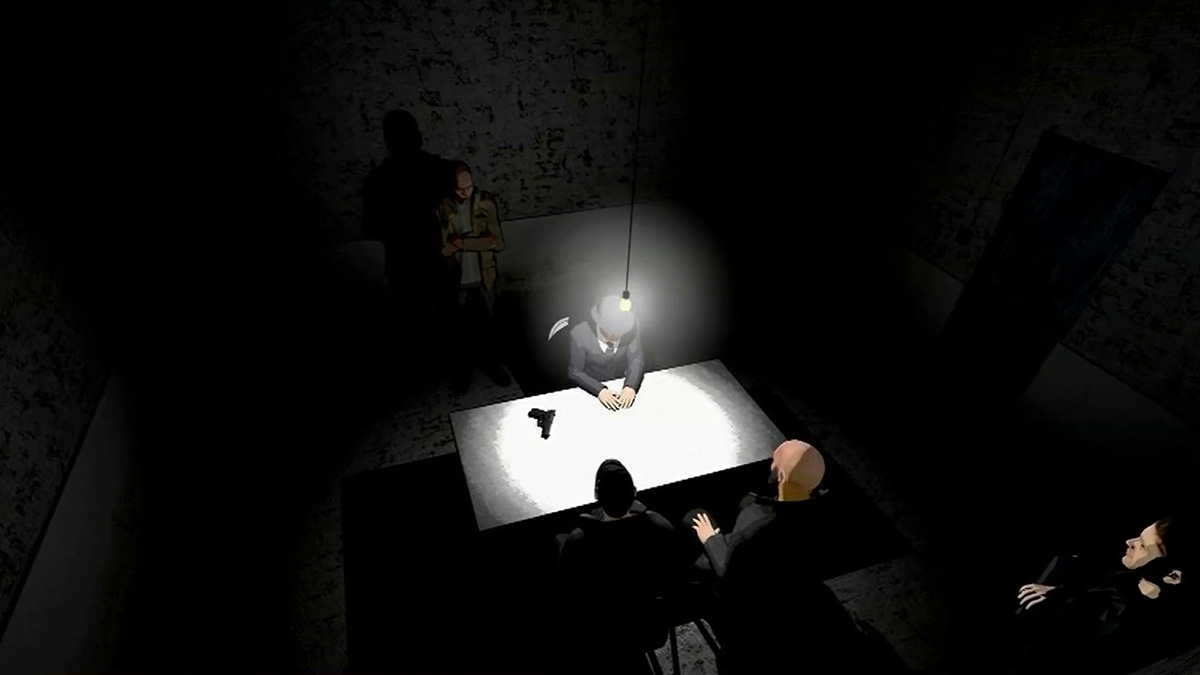 b&a: You mentioned socially distanced motion capture. We’re all working from home at the moment – how did that process of putting this together remotely go?

Adam Coglan: As a supervisor, I spent 80% of my time either on WhatsApp or on a Zoom call. It was difficult. I don’t think it’ll ever replace a team of 10, 15 people in a room being able to interact and go and talk to different departments – art department, special effects, stunts. But we managed to make it work on this and it worked surprisingly well.

Matt Perrin: It was amazing that we could actually do it. We normally would not work from home. There’s generally been no remote work in film, particularly in previs, for security reasons. But we used Teradici and that worked incredibly well. A team of 20-plus artists all logging in through the same firewall, and it worked. I mean, it really did work. Adam pointed out it was the nearest possible thing to actually sitting at your desk in the office, really.

Adam Coglan: Yeah, I think we’d started the project using an open VPN connection, but we couldn’t have done it with that, really. That was not an option. So Teradici saved our lives. 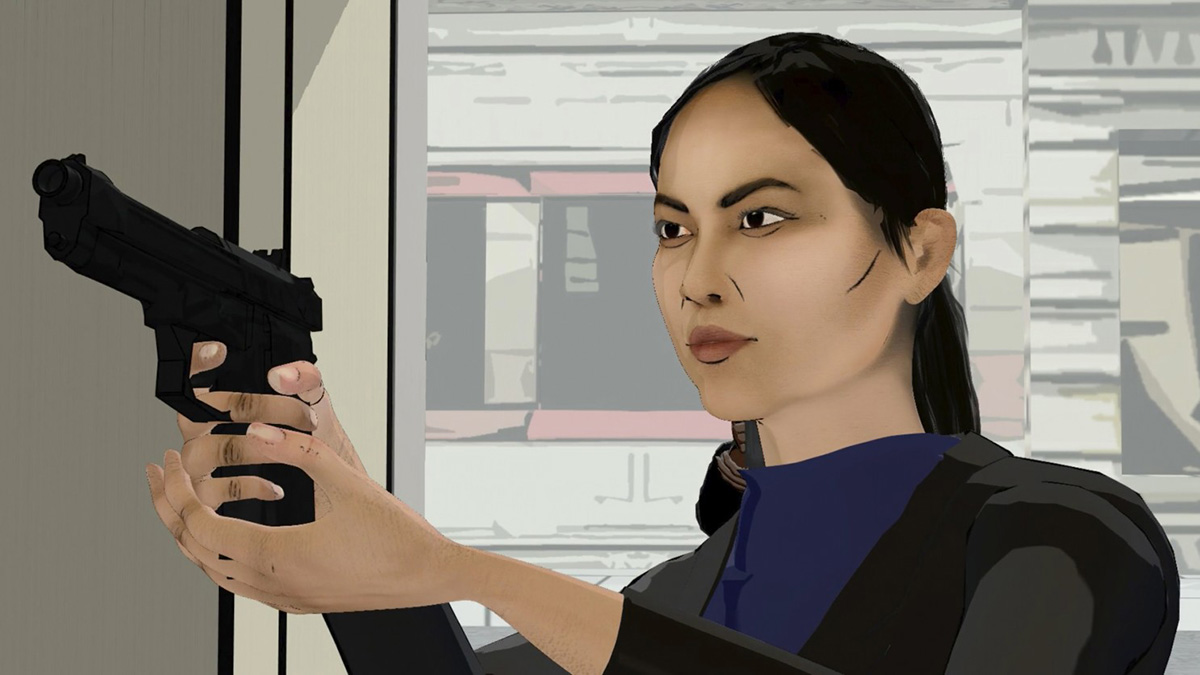 b&a: Congratulations on the project – was there anything else you wanted to mention?

Adam Coglan: Well, I think both me and Matt are very surprised at how well the whole thing went considering the amount of time that we had to do it.

Matt Perrin: It was definitely very ambitious and it was quite scary from the outset, but it was a lot of fun. Typically I haven’t been a big fan of toon shading stuff in the past. I think this changed my attitude towards that a lot. It’s something I would like to try again, particularly on a previs project. In film previs, there’s been talk for several years of trying to do a cross-over and give the previs more of a 2D animatic feel, and I think we’ve dipped a toe in it several times at Proof and I know other companies have likewise.