In the mid-90s, more and more feature films were embracing computer graphics techniques to help tell their stories. But often – as was the case for Tony Scott’s 1995 submarine actioner Crimson Tide – practical effects were still key.

Crafting those kinds of physically-based simulations was no easy feat back then, and Dream Quest would end up using a combination of Alias’ PowerAnimator and Wavefront’s Dynamation to achieve the CG sims. Around this time, too, Wavefront was acquired by Silicon Graphics, along with Alias, to form the new Alias/Wavefront venture in which these pieces of software became somewhat packaged together. Aspects of these tools still exist in Autodesk’s Maya.

Dream Quest had a small team of CG artists on Crimson Tide, with one of their most recent hires actually coming directly from Wavefront Technologies’s Dynamation team to help tackle torpedo wakes and counter measures simulations. That artist was Pete Travers.

“Crimson Tide was my first rodeo and I have no idea if I even got a credit,” Travers related to befores & afters. “I was just so happy to be working on a movie.”

Travers had been the in-house technical director for Dynamation at Wavefront, which was located in Santa Barbara. “I was on the hotline for Dynamation, so I was taking all the technical calls which meant I ended up working with a lot of companies around the place, and somehow it got into my brain that Dream Quest was out there.”

Looking to work at a studio, it turned out Travers had serendipitously already done a test for a torpedo wake using Dynamation. “Dream Quest’s digital effects supervisor Dan DeLeeuw saw that and he was like, ‘Okay, great, you’re hired!’”

One of Travers’ main challenges was to simulate the counter measures, which spun around in the water and produced distinctive bubbles that needed to be rendered and also interact with torpedo wakes, then composited with the live-action miniature submarine plates.

Although Travers had extensive experience with Dynamation (from Wavefront), Dream Quest was then also reliant on PowerAnimator (from Alias) at the time. The VFX supe recalls that choosing which tool to use was a large part of the task. 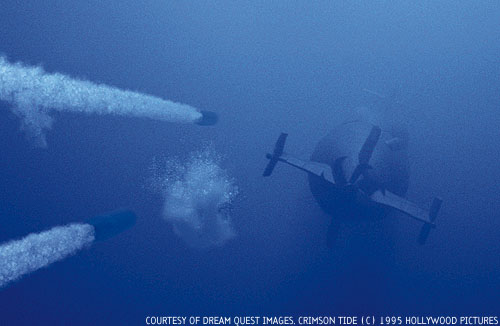 “I remember the moment when Dan and I were trying to figure out how to do it. Our thinking was: Dynamation has superior dynamics, but limited rendering. PowerAnimator has limited dynamics, but superior rendering.

“I just said, ‘Can PowerAnimator take a file? Ten minutes later we were working out ways to pump particle database (PDB) files out of Dynamation into PowerAnimator. And then we were off and running. If that little hook wasn’t there available to us, we might not have been able to pull it off. That was the state of affairs in the industry back then.”

For Travers, working on his first visual effects project was a blast, not only to be able to implement things he had learnt at Wavefront, but also to get an early glimpse into large-scale effects moviemaking. That’s because Dream Quest’s facility at Simi Valley in California was also where the model submarines were filmed in the studio’s model shop.

“I remember the day when they made the announcement that they were going to blow up the Russian Akula-class submarine,” Travers says. “They blew it up in the tank and then we ran to dailies because they shot it high-speed and had no idea if they’d got it. There was a standing ovation because for the guys who had been working on that, it was months in the making.”

“Meanwhile,” adds Travers, “they called us the ‘nursery’ because we were these young punks doing CG. We’d go out in the front lawn and throw the football around and they were all wondering what we were doing. We’d say, ‘We’re on our render break!’”

Travers notes that the render break, of course, was “legit, not an excuse, but it was just a new custom due to the youth of the industry. We would then go back to our desks and work a lot more afterwards, a sign of things to come.”

After Crimson Tide, Travers would go on to work at Santa Barbara Studios (which was heavily associated with Wavefront) and later for a long stint at Sony Pictures Imageworks. He is now a freelance visual effects supervisor and currently in pre-production on Roland Emmerich’s Moonfall, having last year worked with the director on Midway.

Travers credits a number of people from the early days at Wavefront, including Dynamation author Jim Hourihan, as being pivotal in kick-starting his own career.

“I’m fascinated at the origin stories of a lot of this early software. Most people nowadays, don’t realize where it all came from. It was often written by a small number of people – geniuses – in a room.”