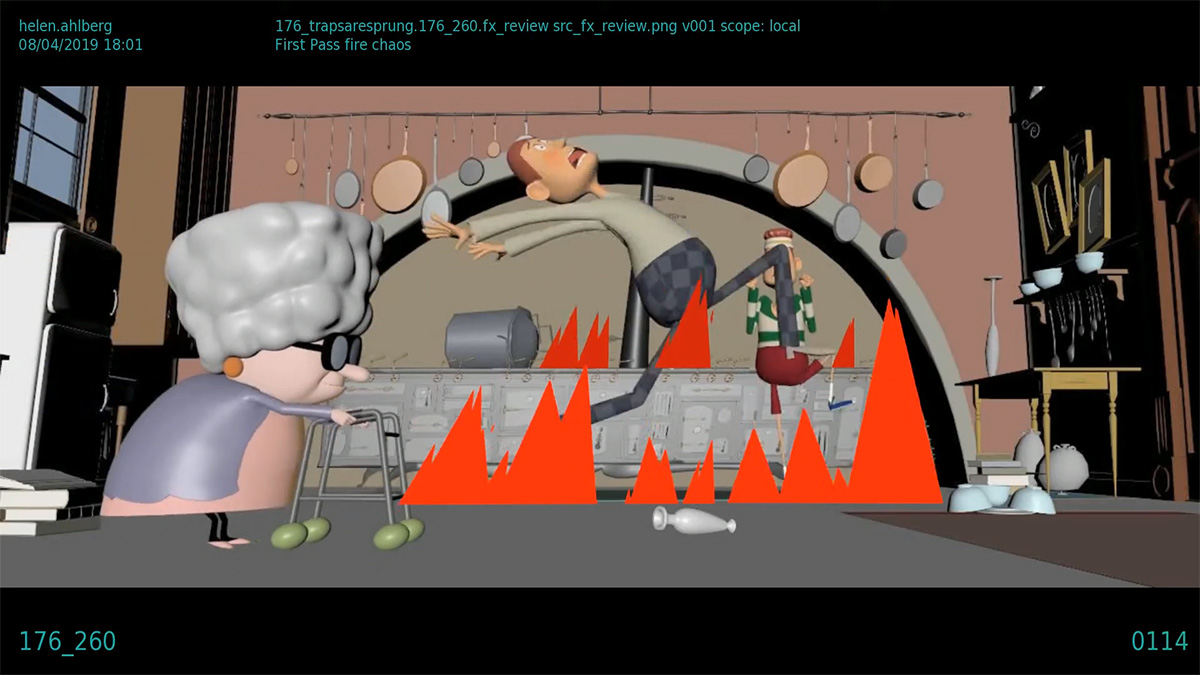 The film went for a hand-made feel, including for things like fire, water, and even…rainbow exhaust

“The thing is,” The Willoughbys head of effects H​elén Ahlberg detailed to me during our discussion about Bron Animation’s new animated feature, “we were trying to avoid simulations for this project. Which is interesting, because that’s mainly what you do with effects! What we were trying to do was get it to look hand-made and not CG.”

I had wanted to speak to Ahlberg after seeing the Netflix film. It was directed by Kris Pearn and based on the book by Lois Lowry.

It tells the story of some siblings who hatch a plan to rid themselves of their pretty awful parents. Something about the look of the film was very different. It was incredibly graphic and textural, almost simple, and that included the effects, as well.

It turns out, of course, that, despite The Willoughbys being CG-animated, the idea was to make things appear as if they could have been built by hand (which was all part of the heightened nature of the film).

“We would try to think more about the materials themselves. And how we could symbolize the different effects more so than to behave like effects normally do,” notes Ahlberg, whose background is in more traditional 2D effects creation.

To get to that very particular look, Ahlberg would actually draw every single effect for the film in 2D first. This provided the necessary abstract timing and shape-language to the effect for things like fire, smoke, lava, dust, water and clouds.

“Then,” says Ahlberg, “the 3D artists would try to match that in 3D using all types of approaches.

We’ve done everything from actual 2D effects for sparks. And then hand-sculpting other effects to give certain shapes. For the fires, for example, they’re blocked out in 2D first and then we would just sculpt them in Maya and animate them frame by frame.”

“Snow was probably the only thing that was just purely simulated,” adds Ahlberg. “But to try to take away from the simulation look. We decided to kill motion blur for it to help give it a hand-made feel.”

Clouds – a heavily featured element in the film particularly when a flying zeppelin becomes part of the story – also started with a more 2D approach. They also had somewhat of a cotton candy appearance.

“For these,” explains Ahlberg, “modeled around six different cloud shapes that we just would randomly populate into the scenes. Then we built a set-up in Houdini where we would generate curves to spin around the clouds like cotton candy.”

“We had a similar approach with smoke,” continues Ahlberg.

“But we would sketch it in 2D and then we would have an artist sculpting all the shapes of the smoke. And then go through the cotton candy shapes system. We would time it on twos and place each shape by hand to get that overall hand-crafted feeling.”

The zeppelin’s propulsion comes from rainbow exhaust (it is piloted by Commander Melannoff, a colorful confectioner). This was one of the FX’s teams bigger challenges on the show, and also required close collaboration with Animation.

“We built a system that would generate curves for the exhaust just as a guide from the exhaust pipe,” states Ahlberg. “We would choose a pipe, say, the left one would be blue and the right one would be pink. And then we would let it generate the curves and see if it looked like and interacted how we wanted.

“And then we would generate special custom trails following this guide curve. We also had to make sure the colors would not merg, so that it would always have those lines, but still also the fluffiness of the cotton candy look.”

What made the effects (look) hand-made

While obviously 3D tools were utilized for the effects in The Willoughbys, they often began – and continued to be informed by – 2D drawings. That’s something Ahlberg believes helped play into the homespun aesthetic of the film.

“When you draw something, you can feel that it’s made by a person and not generated,” she says. “So by having that as a guide for the 3D side, it really made it feel different and it was really fun to work that way as well. It was a little bit of a challenge to get them to marry together but I think it worked out pretty well in the end.”