How that miniature Fed building was built…and destroyed

In my book, Masters of FX, I profiled 16 visual and special effects supervisors about their bodies of work. One of those was Ian Hunter, who, through Hunter/Gratzner Industries and New Deal Studios, has contributed a wealth of practical, miniature, and other effects work for large scale films and other projects.

Hunter supervised the miniature explosion of the federal building in The X-Files Movie. Back in 1998, the film featured a mix of practical and digital effects work, but the building explosion and subsequent partial collapse – which happens very early on – was easily the most spectacular scene.

That work made its way as a dedicated spread into Masters of FX, but I’m sharing Hunter’s full notes on that scene that he prepared for me for the book. Read on to find out more about the concept of ‘pre-disastering’, air rams and cut-up phone books. Note: this was previously published at vfxblog.com. 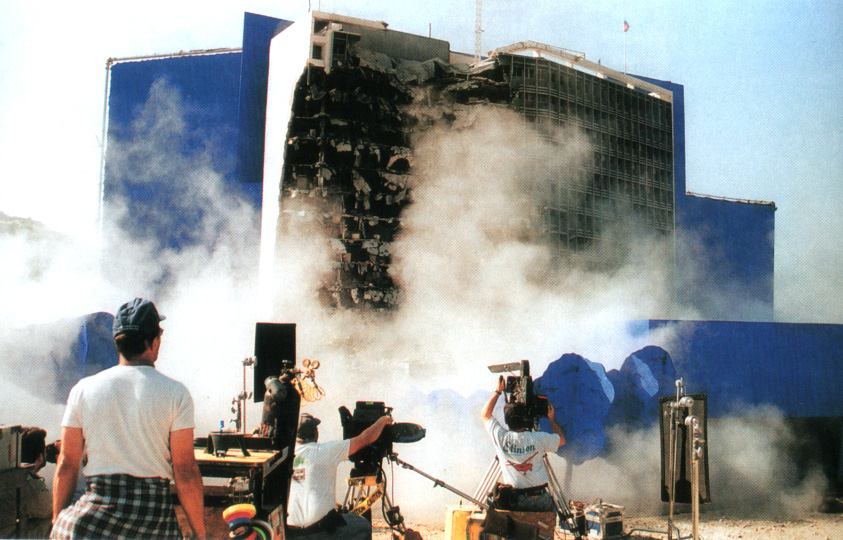 Ian Hunter: Even though The X-Files is science fiction, it deals with its subject matter like a straight drama, and the explosion scene had to play out as real. We actually studied building demolition footage and the tragic Oklahoma City Federal Building explosion to see what kind of things happen to a building during a collapse. For the scene the VFX supervisor on the film Mat Beck previs’d the shots very thoroughly.

He then photographed plates of the actual location in downtown Los Angeles that we would need to match our building to later. Interestingly, this was not a huge budget film, and so we could not actually construct the full building pristine and then destroy it. Rather, we built the miniature ‘pre-disastered’ with broken floors and damaged walls. We then built a central finished section of the building wall that we could get a close up on to sell the idea in the cut that the building stars out intact. 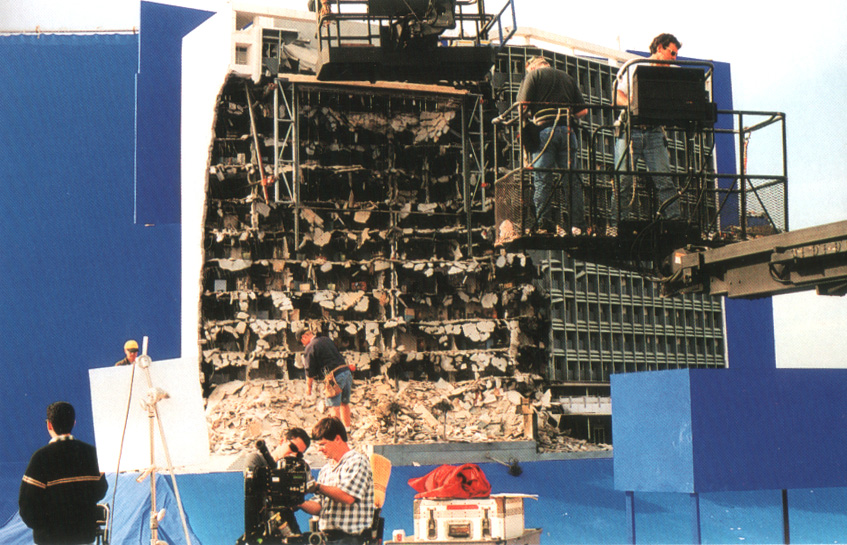 The building had a steel frame and drywall covered wall to take fire and explosions. We calculated the sun angle for the day and time we planned to shoot and set the model up in a large vacant lot at a particular angle to get the lighting to match. The floors were on air rams that could retract to let the floor fall and drop pre-broken debris. Pyro cannon and air mortars hidden behind the model and firing out of a narrow slot at the base created flames and a pyroclastic type billowing cloud of debris.

The finished center wall section was hung from the pre-disastered main building. The finished wall was cut into a radiating series of pieces held together with thin lines of monofilament. Each piece had its own filament. By placing little explosive squibs on the lines we could sequence the explosions and drop the pieces of the wall in order from bottom to top, center to outside, so it looked like the main explosion was radiating out from the bottom center.

This part of the model only worked from the one high camera looking down. A large mortar with a fireball explodes at the base as the wall pieces fall into the flames, eventually the fireball consumes the camera lens. This allows a cut to a wide shot that shows the remainder of the wall collapsing. We also put a weak knee under the roof so it could collapse. Another fireball at the base of the building explodes and crawls up the face of the pre-disastered building, allowing there to be an overlapping action between the first shot and second.

A final shot of the actors walking up to the building was duplicated with a motion controlled panning camera that we did as an aftermath shot. Small fluttering government papers come floating down during the shot, courtesy of me and two assistants pushing cut up phone book pages off of the roof with brooms.