How the heck do you do that, anyway?

Do you remember that shot of the T-Rex in the rain tearing down the Main Road fence in Jurassic Park? I always marveled just at how — apart from the astonishing feat of modeling, animating and rendering such a photoreal creature in 1993 — ILM managed to integrate the T-Rex so well in the rain, especially since so much of the rain was practical.

It has stood out for me all these years since, and I keep being reminded of it whenever I see another CG character featured in the rain where I know that practical on-set rain bars or towers have also been used. There are scenes in War for the Planet of the Apes, for instance, where I still can’t quite get my head around Weta Digital’s seamless rain integration.

My obsession with these kinds of rain shots cropped up again when I caught a glimpse of Rodeo FX’s work for Netflix’s Raising Dion, in which they crafted a lightning-based character that appears in a rain shower, and where live-action plates also employed practical rain elements.

So, I figured I’d ask Rodeo FX, who worked under production VFX supervisor William Powloski, about their methodology behind the rain integration. Did they use clean plates? Did they generate CG rain? How were any extra practical elements used? Does rain provide pretty forgiving split lines for all this, anyway? Is any individual rain droplet roto required? (yes, I really did ask this, and the answer was, of course, no)

Now, anyone who has done this kind of work or who is a seasoned compositor will probably say that rain and other atmosphere integration is relatively ‘run of the mill’ in VFX, but I still think it’s a fascinating problem that visual effects artists tend to solve so well. Here’s how Rodeo FX handled it for Raising Dion, plus scroll down for a special #retroVFX insight on the T-Rex rain shot from Jurassic Park.

François Dumoulin (VFX Supervisor, Rodeo FX): When it comes to rain or smoke or anything that is atmospheric, it’s usually intentional from the director and the DP to make the scene more dramatic. The basic thinking from our point of view is: always look at what’s going on in the plate and try to just replicate it perfectly. 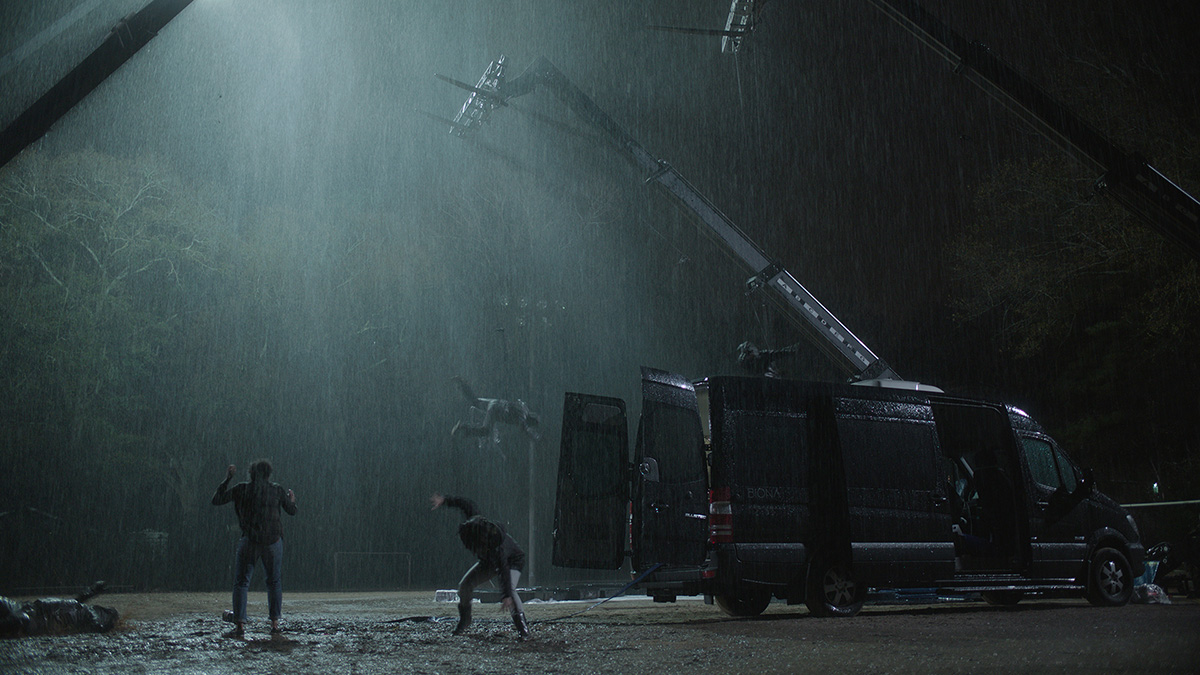 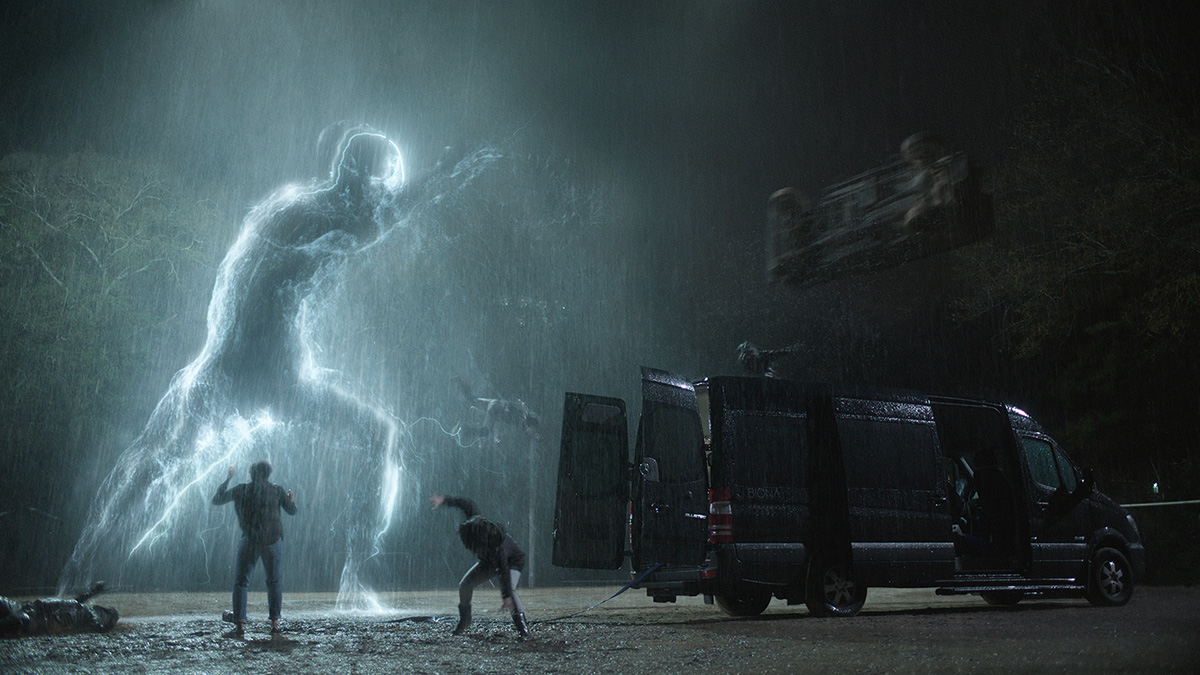 In the case of Raising Dion, they shot everything with very intense practical rain. We looked at it and we built a Houdini rain system that was very generic but had the basic properties of what was going on in the plates. We generated a bunch of layers for very deep background rain, mid-ground rain and foreground rain. And then it was mostly comp that handled it and took care of what to keep from the plate and what to replace with full CG rain.

Working with the plates, and straight into FX

Vis Ong (compositing supervisor, Rodeo FX): Once we received the plates, the big department that helped us a lot was the paint/prep team who had to remove the light and rain cranes so that we could put our CG stuff on top. We never give enough credit to these artists! 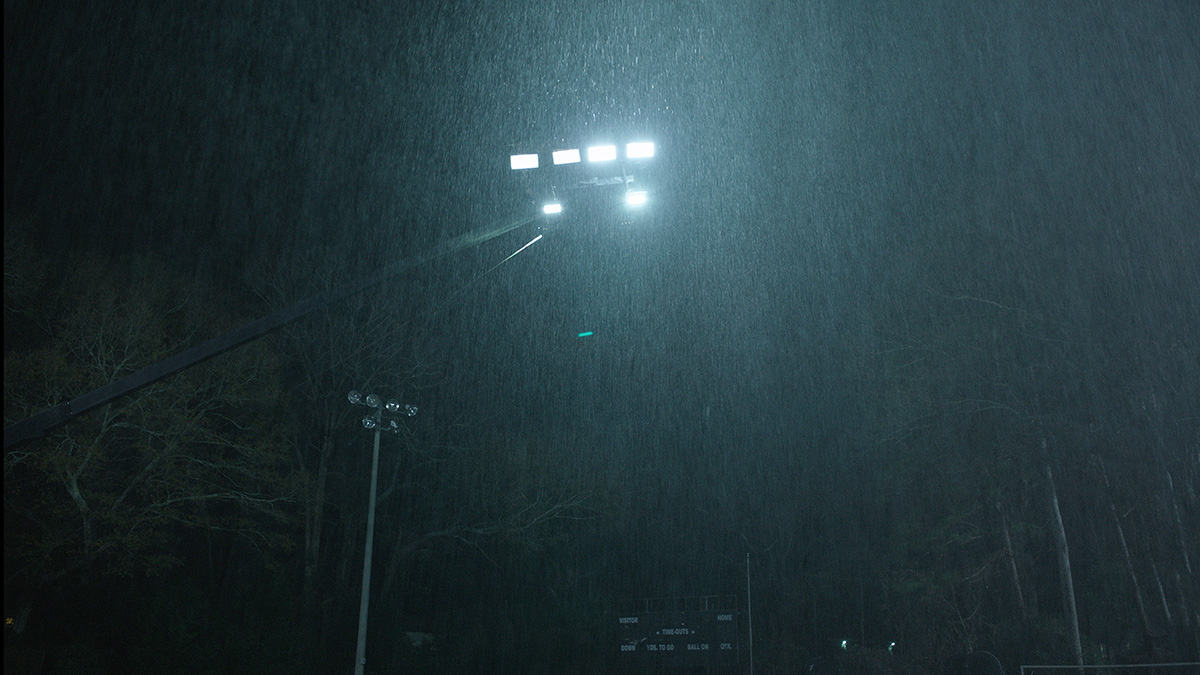 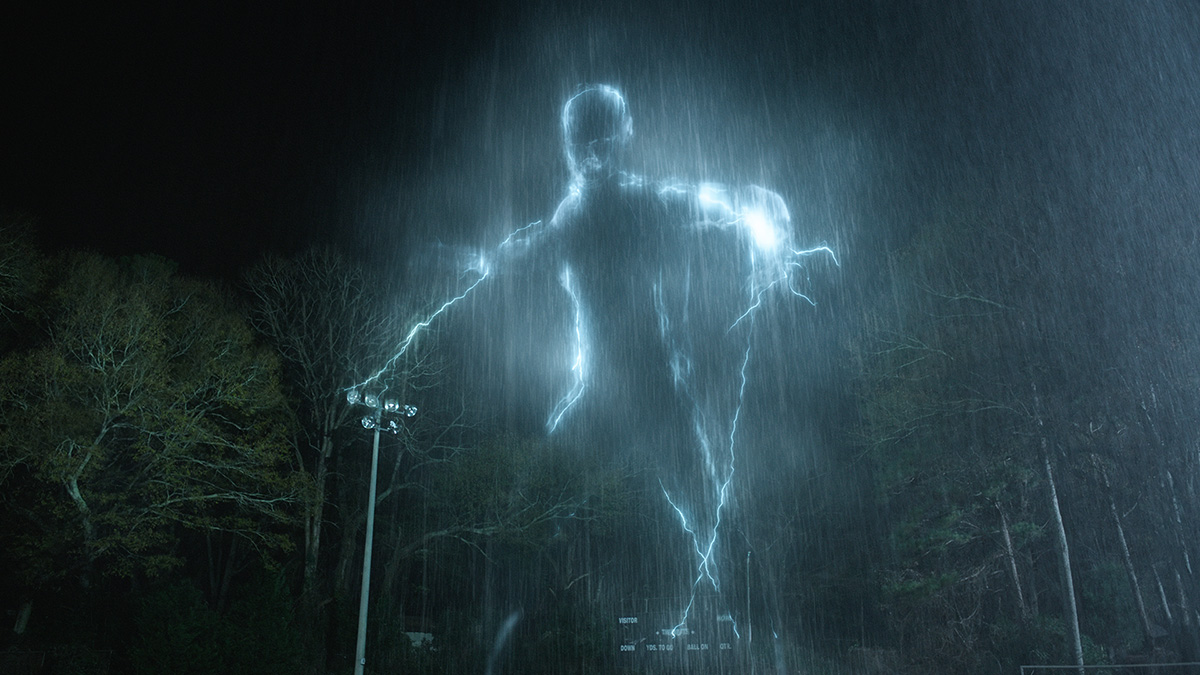 Then, once we removed the cranes we got the FX artists to build their CG rain – they used Houdini – to be as close as possible to the rain in the plate. We tried to match the amount of rain, the depth of the rain – we take everything into consideration. This is especially the case in wider shots, where we composite those in deep. We try to have the proper depth of field and de-focus to match the plate as much as possible.

We are effectively painting out the rain in the parts of the frame when we have to remove the cranes. So, let’s say we try to remove a crane and put a character in front, that’s where we try to match the rain as much as possible. The prep artists actually do the first pass using clone paint tools to re-generate the rain. Then our FX artists try to add extra rain on top to hide any imperfections in the blend.

The art of compositing in the rain

Vis Ong: Rain can be very forgiving. As long as you get the frequency and the scale of it right, you don’t really suffer. We did our compositing in Nuke. The most useful thing that we can do in Nuke is to match the defocus and the shutter, basically using everything that we can from the on-set data. 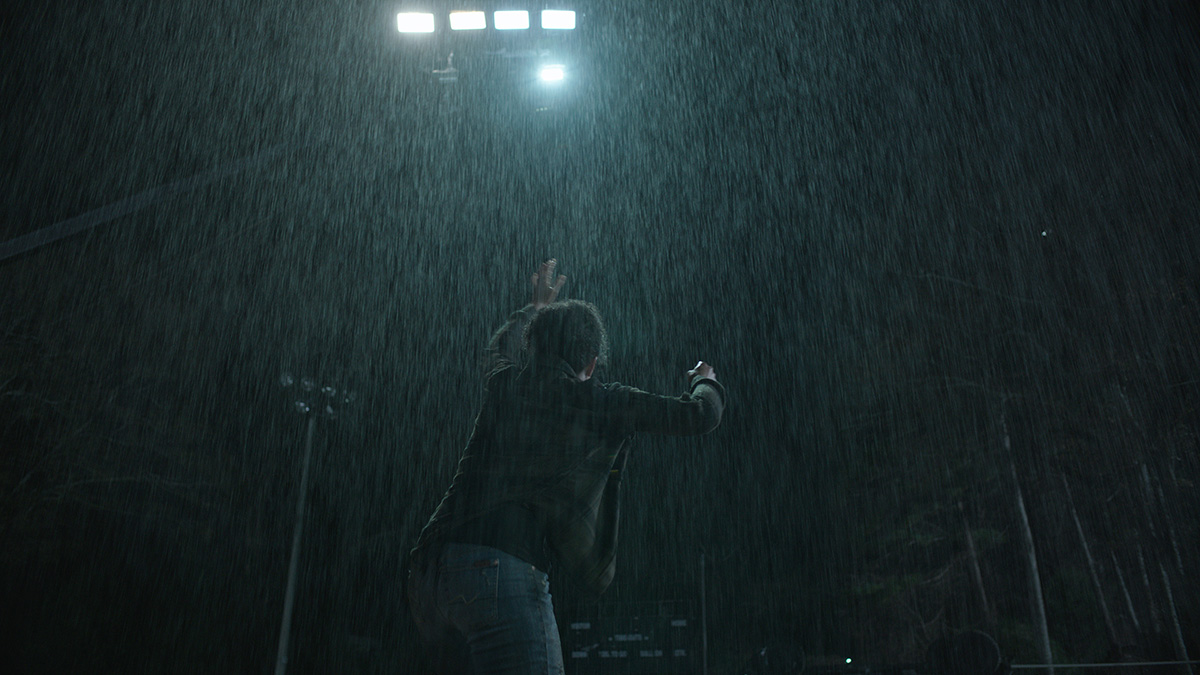 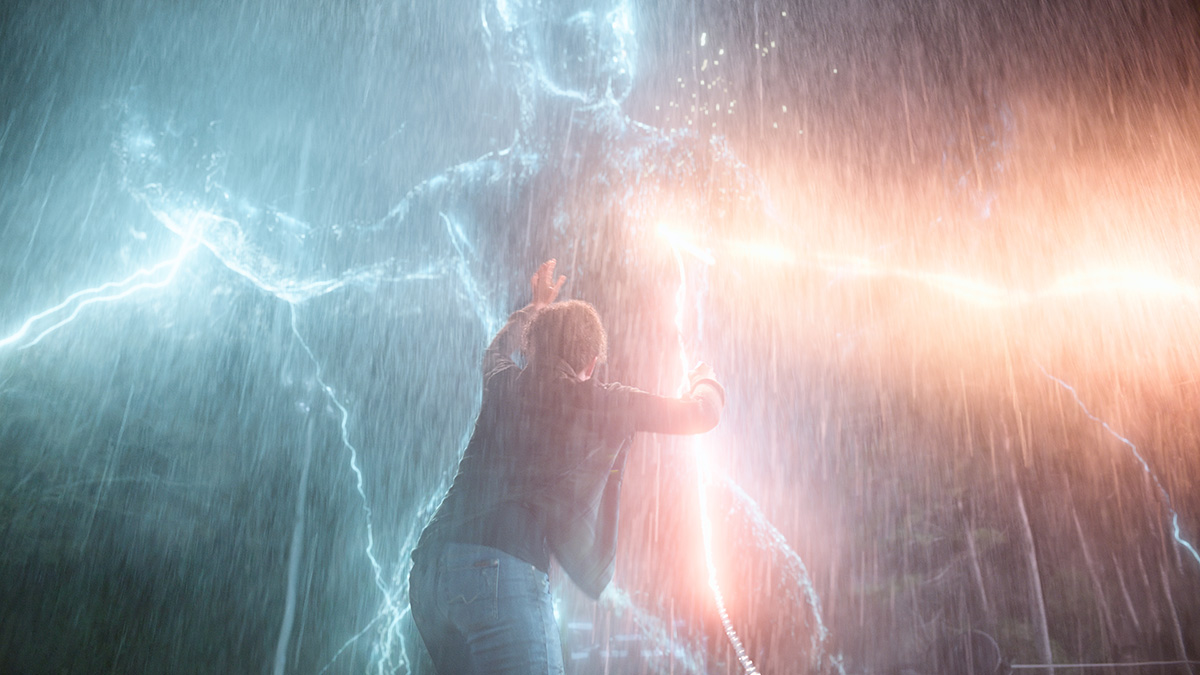 To make the character a little more interesting, we also came up with an idea that was not part of the initial design to make the character interact with the rain. We figured that if it is a natural thing made of light, it would have a layer of water dripping around over its invisible body. When it does big moves, it’s actually disturbing the rain and that helps ties all the pieces together.

François Dumoulin: Yes, at some point our lead FX artist came up with the idea of, why don’t we have our character set up and our rain set up interact. It meant we could have rain dancing and dripping off the character. We sent that to Netflix and that was originally not part of any design that they had and they actually loved it. There were other vendors working on the show, too, and from that point on, everybody had to match that same look.

Dino in the rain 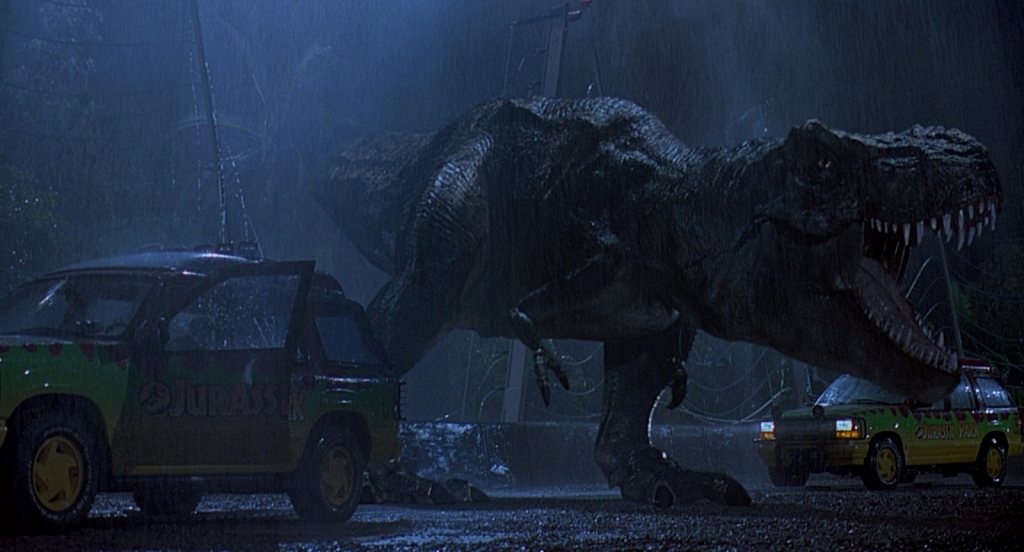 Alex Seiden was the ILM CG supervisor for that Main Road T-Rex sequence in Jurassic Park.

“Mostly,” explains Seiden, “we double exposed the rain and splash elements in. We didn’t try to pull a matte or anything like that.”

Several artists then at ILM were key to making those T-Rex rain shots a reality, including Joe Letteri (now senior visual effects supervisor at Weta Digital), who wrote the shader for the rain pelting and running down the T-Rex, a major part of integrating the creature into the plates.

And to stay (mostly) on topic, I saw recently that my friend Hugo Guerra had posted a Nuke tutorial about how to remove rain and snow from live action plates, in order to make clean ones. Watch it below, and support Hugo’s Patreon here.