Two decades ago, David Twohy’s Pitch Black kickstarted a mini-franchise and the career of actor Vin Diesel. The film, shot in the Australian outback and at Queensland studios, also featured an array of interesting creatures and other visual effects.

The ‘bioraptors’, in particular, were designed by Patrick Tatopoulos and realized as both practical creatures built by John Cox’s Creature Workshop and via a significant number of CG shots by Double Negative (now DNEG). Rounding out the effects effort was Hunter/Gratzner Industries, which supplied miniatures, with a few other outfits making up the rest of the effects crew.

To celebrate the Pitch Black’s 20th anniversary, I wanted to look back at the fantastic creature work of the film with animatronics supervisor and puppeteer John Cox, in particular. Before our conversation, though, he sent me something that I initially thought was kind of upsetting: photos of his team pulling down the animatronic creatures that had adorned his own studio in Queensland for several years and then taking them out to the trash.

I had to know more about what had gone on.

So, we set up a call. Firstly, Cox spoke about the various designs and re-designs of the aliens, how they were operated on set and why they had to use blue blood instead of red. Then he shared the sad – but completely normal – fate of the animatronics themselves. 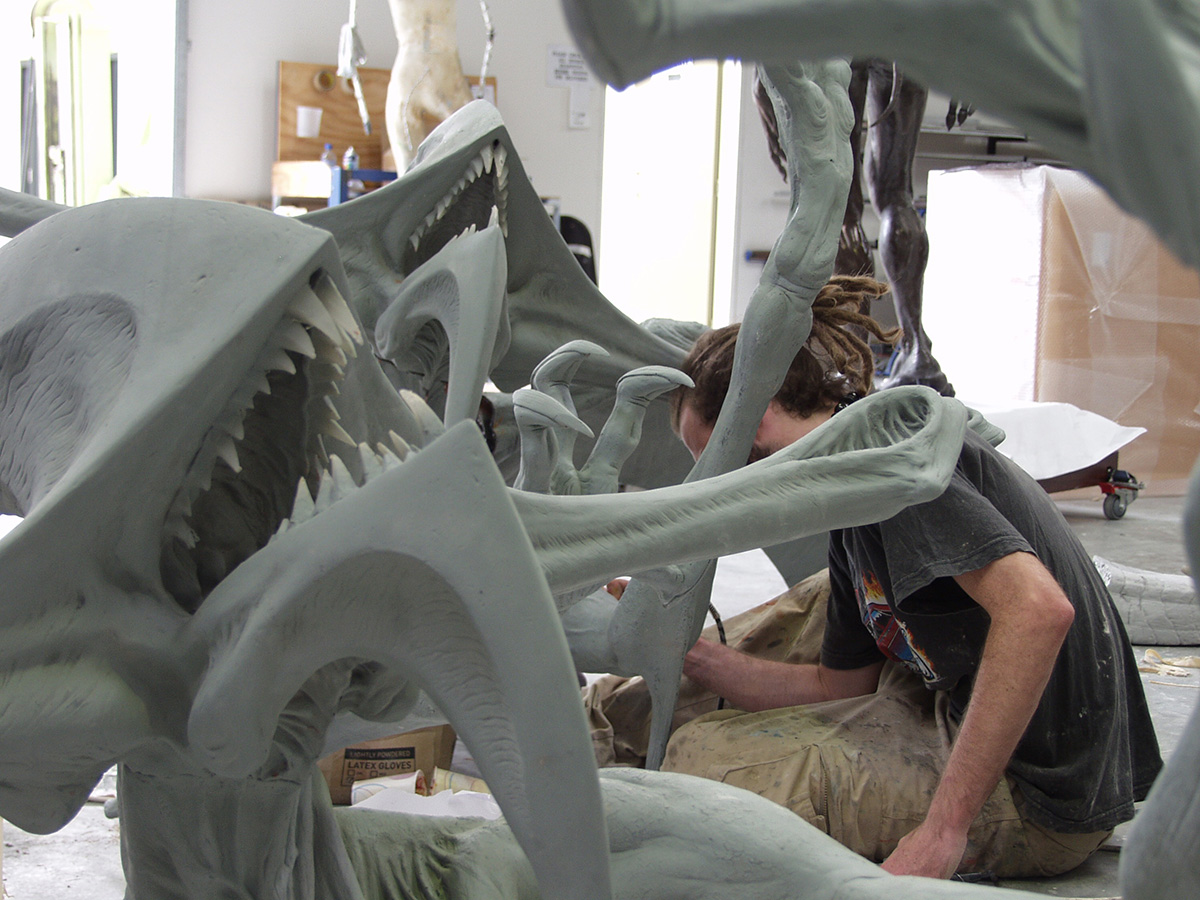 b&a: Where did you start in terms of creature designs for Pitch Black?

John Cox: David Twohy had engaged Patrick Tatopoulos to do the design work on the creature and we came in at the point where the creature was designed. There was a lovely maquette made of it. I did get to see some of the earlier versions of what the creature was going to look like. It was very much like a dinosaur – it wasn’t the wacky version that actually ended up making it into the movie.

Once we had the maquette, we started to flesh it out. We sculpted the whole thing full-size. It was during that process that we looked at a number of the anatomical elements on it and figured out that as a practical, real living, breathing creature, it could not have survived. Its major attack stance was to rear up on that big tail and basically present itself so it looked like a rearing snake. But with the original design – if you look at the head in profile, it looks like a quarter moon. A lovely round shape that is split in the middle with the mouth. But when it was rearing back, it could only open its mouth about 25 millimeters and then the point of the lower jaw hit the chest. So, we shortened the lower jaw so that he did have a full range in the jaw movement to be able to open it and screech or eat. 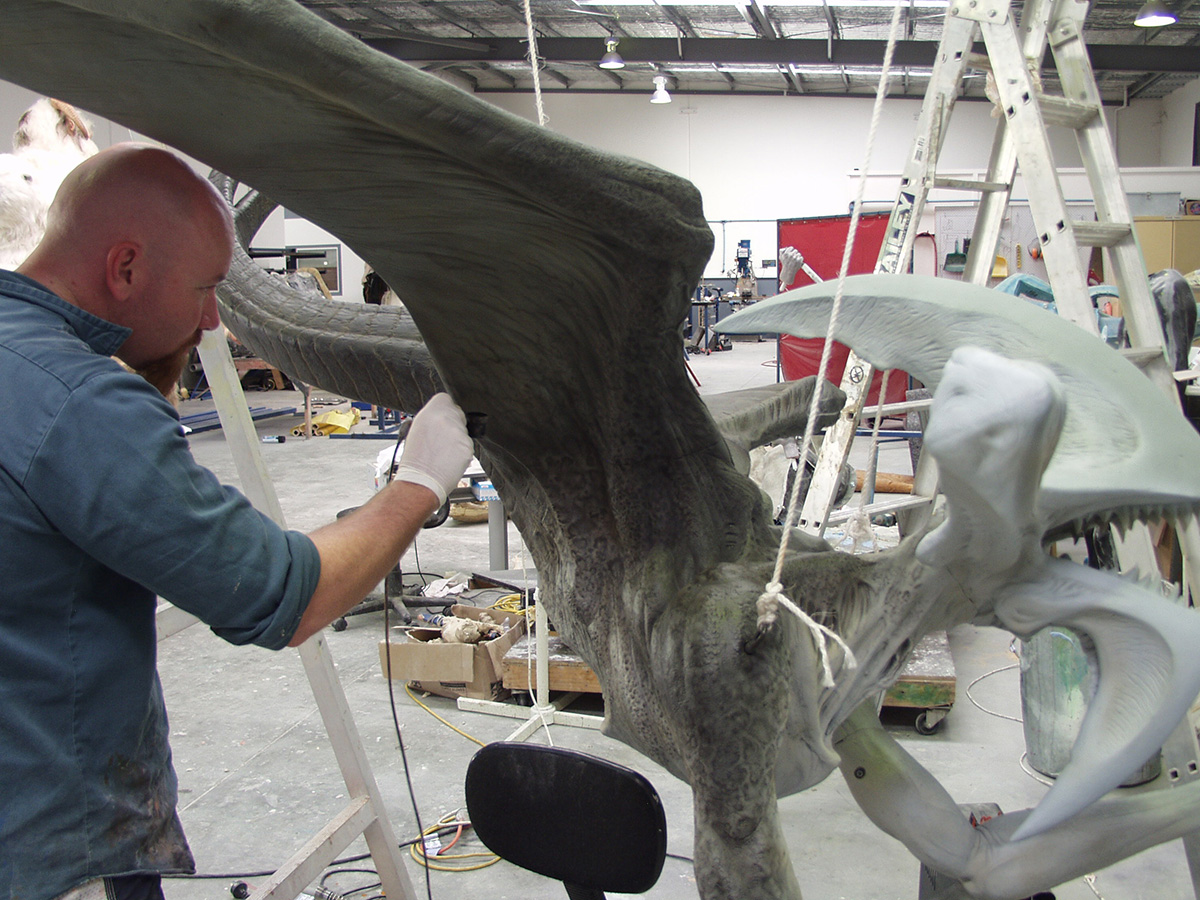 The other thing was, when he was in exactly the same position, rearing up on its tail, with the wings folded up behind his back, the two big outriggers on either side of his head could only move a very small amount before they smacked into the wings. So we had to shorten that length on those outriggers to give a much bigger range of movement in his head.

There’s another design element that was changed for the better, too. In the original design, there were two balls, one on either side of those big outriggers. There was a ball structure in each of those and in each of those balls there were three indents. When they were designing it, the idea was was that that was the sonic/acoustic device that the creature had to see with. But because they were spheres, everyone just assumed they were eyeballs. It caused too much confusion, first of all with the people that were behind the scenes on the production. Anyone looking at the creature would have wondered, well, why has it got eyes but it can’t actually see? That was a linchpin of the whole biology of the thing and also the tension in the story. So the spheres were taken out of those structures and there was just sort of a membrane left in there so that it looked like the creature was blind.

Finally, we’d just pulled out the first full version in foam latex of the creature when we got a call from the producer saying that they had got a distributor on board and the distributor didn’t want the single tail. He felt it looked too much like a dinosaur tail. So he wanted the tail to be split at the end. There was a redesign done on the tail and we had to remake the tail this time with the two ends on it. 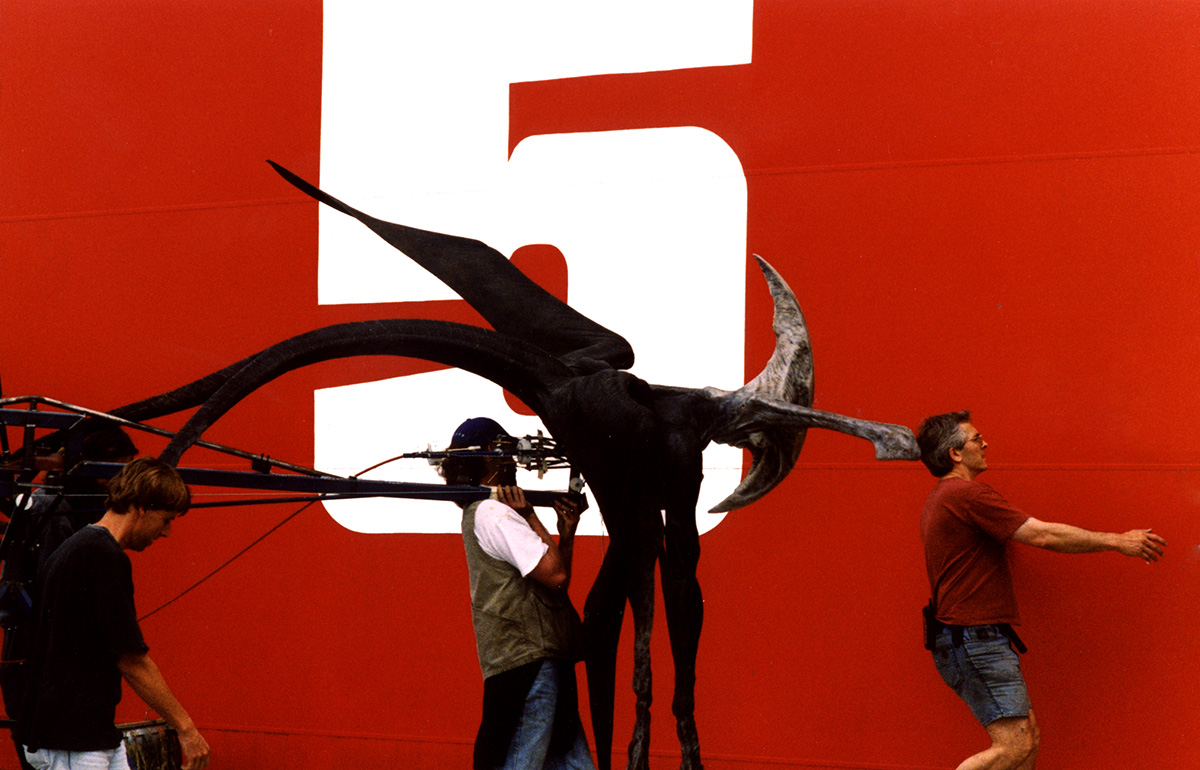 b&a: What materials were the creatures made from?

John Cox: It was all foam latex for the skin work. Then there were fiberglass undershells to hold everything in place and house the mechanical devices, which were bolted in and hung off those internal fiberglass forms. For the two full animatronic creatures, all of the control rods and control cables came out of the underside of the stomach and we had those off to one side. Because everything was so dark, we really didn’t need to do any digital clean-up on this stuff because we just wrapped everything in black velvet and they just disappeared into the darkness.

b&a: Where were the creature scenes filmed?

John Cox: It was shot in Queensland at the Village Roadshow sound stages. The creatures never went on location in Coober Pedy, which would have been tricky because it’s just so far from anything. It just meant that we didn’t have to build in another level of indestructibility in them or a truck journey for them there and back. 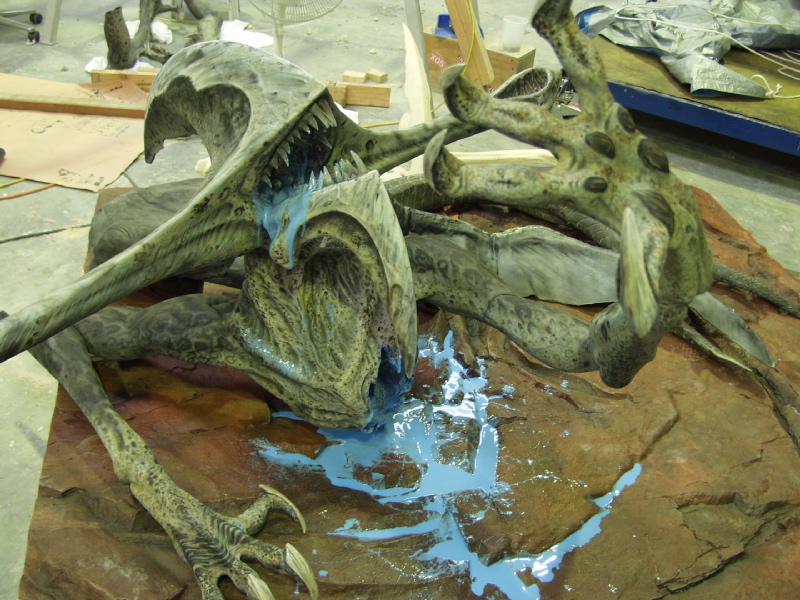 b&a: Can you talk about how they were operated on set?

John Cox: For all of the shots that we had to do, we were operating just outside of frame. We had a gigantic boom arm that went through the whole body that allowed us to rear the creature back up onto its tail. That also then had a big pivot on the top of its neck so that the head had full range of movement – left, right, up, down. The jaw could open and close, too. We had no eyes, of course.

For the arms, we had poles coming out of the back of the elbows with a puppeteer on each one of those, and they also controlled the fingers. The sequence where Vin Diesel has got hold of the creature’s wrists and it’s trying to kill him – he was actually fighting two people, one on each arm. He was working his guts out on that particular shot, trying to keep the fingernails away from him! Which were the real hard fingernails, by the way, we didn’t have soft fingernails on that for him. 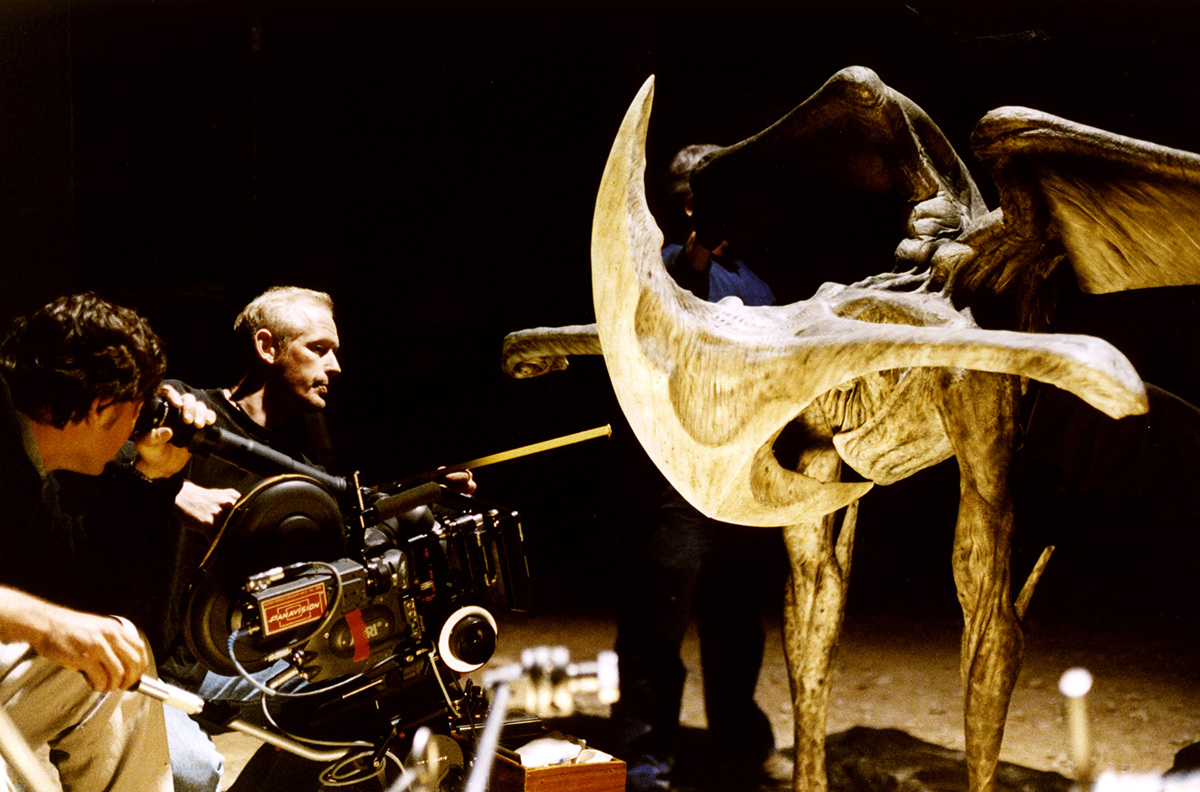 b&a: Do you have any other fun memories from the on-set experience?

John Cox: There was an early discussion that there was to be no blood because they wanted to get it in on a certain rating. Now, with blood, in the way that it’s perceived for ratings in films, is red blood. So we had a very, very pale blue blood and there were buckets and buckets of blue blood…and never a problem because it wasn’t red! That way we could just throw it everywhere; on people, on the ground, on the critters, and not have to worry about a rating, since it didn’t look like human blood.

One of the funnest times we had was when they were running through the gauntlet, which were the steep chasms with the cliffs on either side, with the creatures all above them, smacking into each other and trying to kill each other as well as the humans. There were a bunch of us up on top of the cliffs. I think we had nine full-sized lightweight bioraptors and body parts and buckets of blood and guts. As the actors were running down that gauntlet we were just throwing these off the top of the cliff behind them or in front of them. That was a lot of fun. 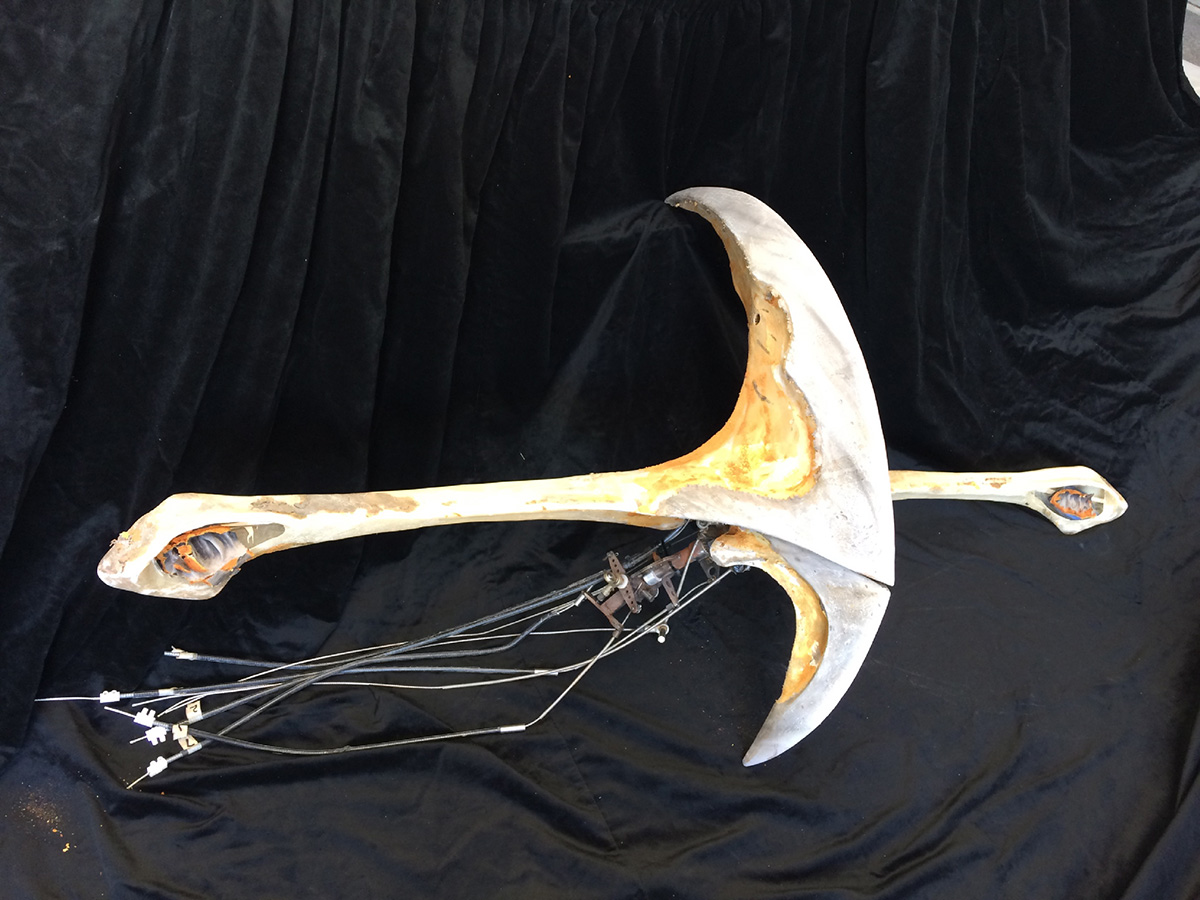 b&a: So, whatever became of the creatures you created for the film?

John Cox: Well, two of the hero ones that we had kept sadly deteriorated. These were the two animatronic ones. We had cut all the cables off them and we had strung them up inside the workshop roof. Up here in Queensland, it does get very, very hot and humid and tin roofs do radiate a lot of heat.

So, they lasted a good 20 years; I think we made them in 1998. The foam latex perished over the two decades, and we threw them out in 2018. We cut them down and sliced them all up – well, we didn’t really have to do much slicing. They were pretty terrible. They crumbled apart. But we salvaged the heads off both and stripped all of the skins off. We have one of the heads, while the other head is about to go over to live in Germany in a museum over there. 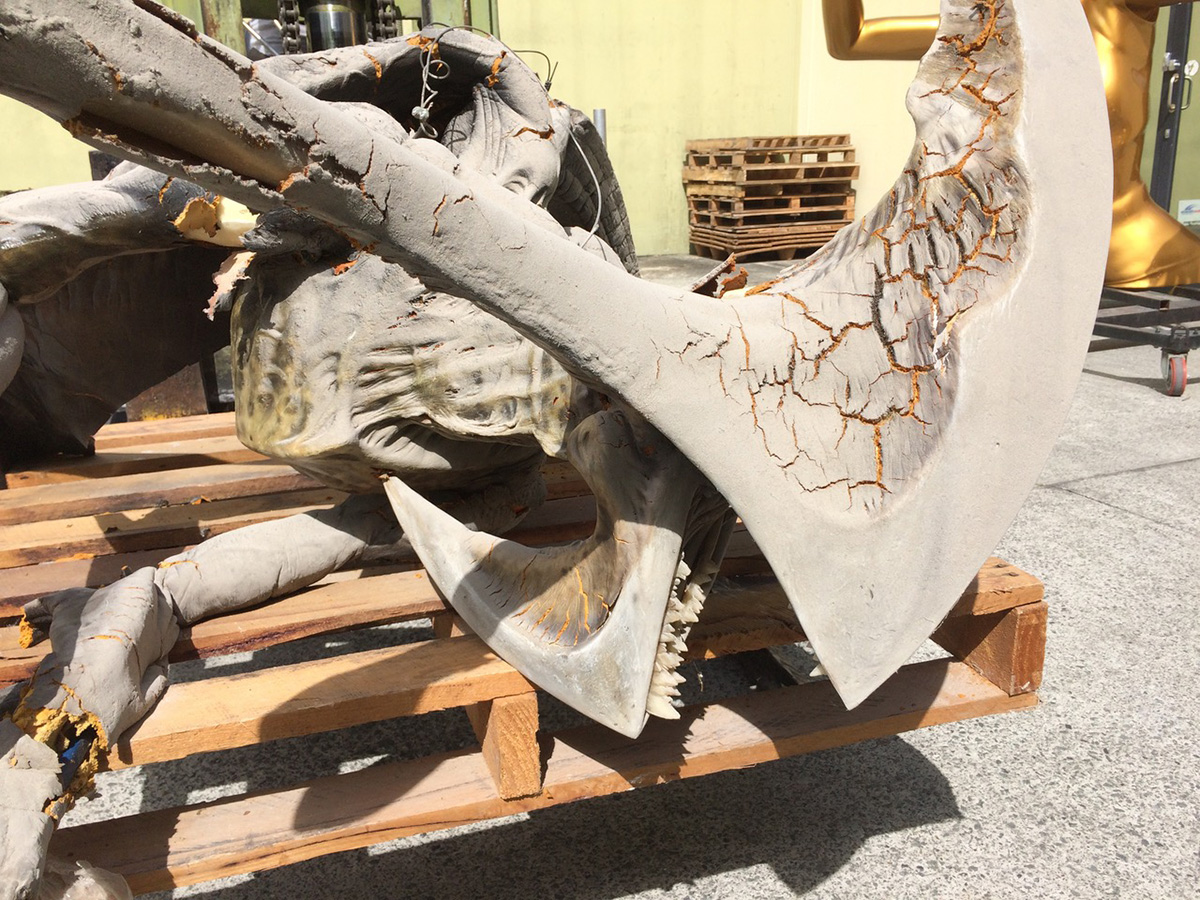 b&a: Oh great, I hope to see it one day. Finally, one of the things about Pitch Black that I really loved was that there’s a large practical creature component, and there’s miniatures, as well as a move into digital.

John Cox: Yes, absolutely. Double Negative was the VFX studio and they had a cast of the creature shipped over to them in London to digitize over there. We were not at the digital sculpting phase as yet – not many people were. But it was definitely a great combination of techniques.

If you’d like to know more about Pitch Black, my book – Masters of FX – included sections with DNEG visual effects supervisor Paul Franklin, as well as miniatures supervisor Ian Hunter (from Hunter/Gratzner Industries and later New Deal Studios), who both discussed their work on the film. I’ve included those pages below. 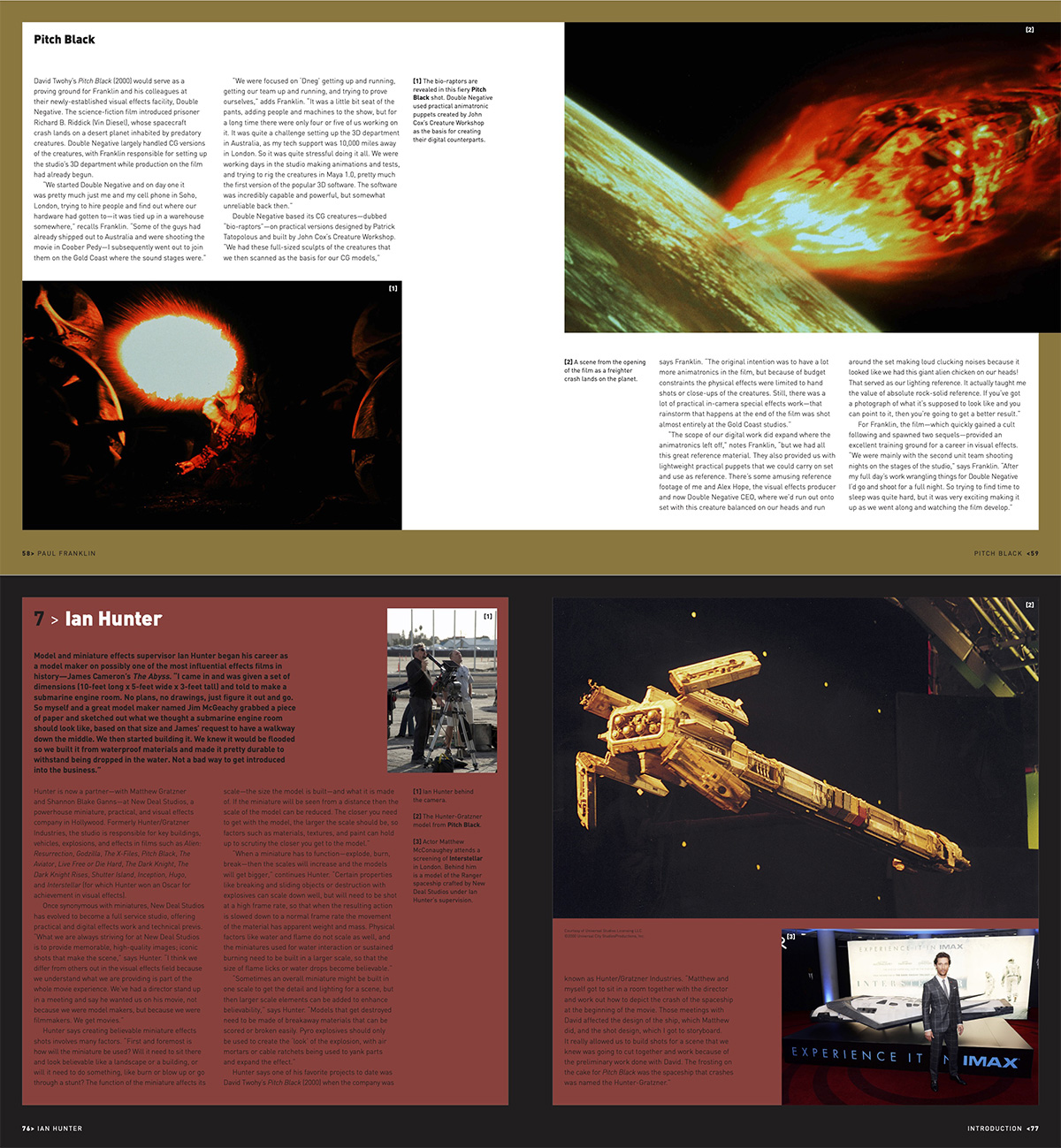 3 Replies to “Whatever happened to the practical creatures from ‘Pitch Black’?”