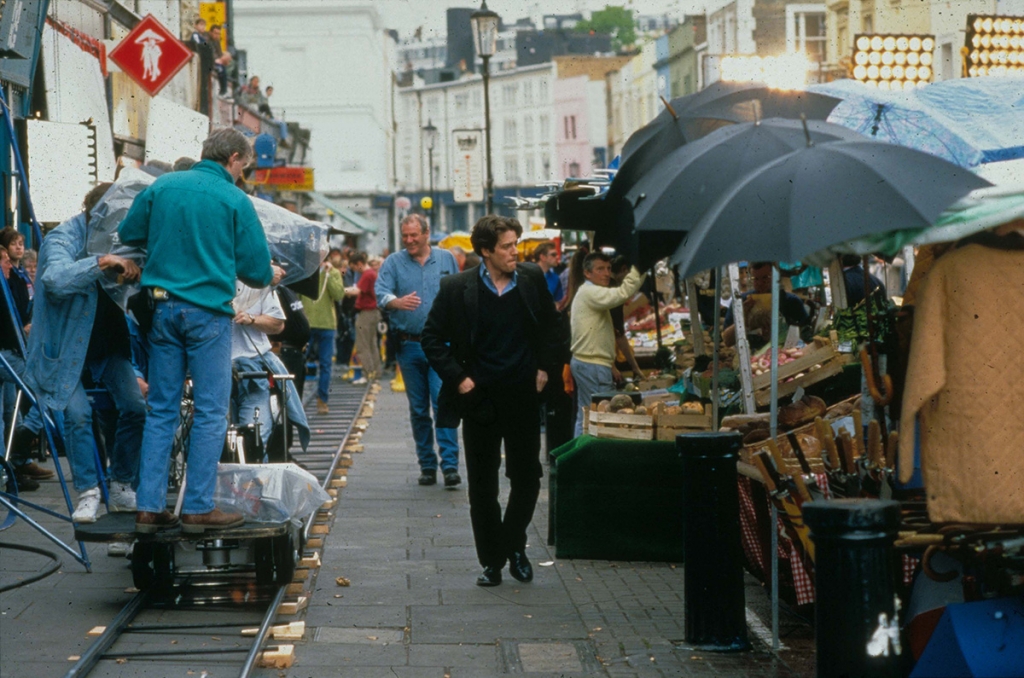 Seamless transitions, crazy frame counts, and why Hugh Grant is in this featured image.

Sam Mendes’ 1917 – releasing soon – plays out as if the filmmakers had captured the movie in one-take. I have to say, it makes for captivating viewing. It has the audience on the edge of their seats for the entire movie. I was tense the WHOLE time.

Of course, the film was shot in several takes, and then pieced together with clever editing and VFX techniques. Which made me think about other films and television shows that utilize lengthy one-takes, oners or tracking shots by taking advantage of invisible visual effects.

So, here’s my look back – in date order – at some of the best long oners out there where VFX came into play in a significant way. It was hard to choose just 10! At the end, I’ve identified a few other obvious contenders, but if I’ve missed any major ones, please let me know in the comments.

What makes these shots so amazing is obvious, really: you watch the scene, there are no cutaways, the magic plays out right in front of you and you’re left wondering, how…

The opening shot of Mikael Salomon’s Hard Rain is a 4,997 frame fly-over that starts at a flooded dam, travels across a river and flooded road area and into a local town before settling on actor Randy Quaid. The shot combined miniatures by 4 Ward Productions, VFX by Cinesite and a live-action Cablecam set-up for the town part. It gave a wonderful feeling that maybe, just maybe, a real helicopter had been able to capture all that action.

OK, I’ll admit it, I often watch the ‘walk through the seasons’ Portobello Road shot featuring Hugh Grant in Notting Hill, simply because it’s such a great scene and because I always look for the seams, and can never really find them. Grant was filmed performing the walk over one day. The VFX was completed by Framestore CFC using several techniques such as blending and morphing plates (four different ones), color grading and adding in some elements such as rain, leaves and snow.

There’s a ton of long oners in Children of Men, which was directed by Alfonso Cuarón (working here with DP Emmanuel Lubezki, who features heavily in this list). One of the oners sees a number of people driving along a road. The camera captures their interactions, in one-take, moving around seamlessly until Julianne Moore’s character is shot mid-conversation. A specially made camera car with a top-mounted camera and moving seats and doors made the shot possible. Paint-outs, stitching and some CG elements such as a motorbike were provided by DNEG. An equally impressive one-take occurs towards the end of the film during a three-and-a-half-minute battle sequence that finally reveals a woman having given birth (here, Framestore created a CG baby for the scene).

In addition to the breakdown video above, I implore you to watch a clip of this 5 and a half minute scene from The Secret in Their Eyes (El secreto de sus ojos) that begins as an aerial view of the Huracan soccer stadium and dives down all the way to a close-up of the main actor, then through continued conversation, crowd chaos and even a chase sequence (with zero cuts). It was made via eight separate takes, a couple of hundred real extras, 42,000 Massive agents and some impressive CG and compositing work by an in-house team, who later became the appropriately named Oner VFX.

It’s hard to fathom how all of the visual effects in the Battle of New York sequence in Joss Whedon’s The Avengers were realized, let alone the Avengers tie-in shot that sees each superhero hand off to each other – with no cuts. Live-action elements were mixed with huge amounts of CG geometry and CG digi-doubles in a mammoth shot completed by ILM. Subsequent Avengers films also featured ‘tie-in’ shots, too. These must be such fun to plan, previs and shoot, but I’m sure involve a crazy amount of work in post.

Gravity begins with a mammoth tracking shot (upwards of 13 minutes) in outer space. Director Alfonso Cuarón, again with DP Emmanuel Lubezki, heavily previsualized the shot, which was executed in VFX by Framestore. Live action footage of Sandra Bullock and George Clooney was captured in an LED light box, with just about everything being CG renders. One VFX artist who worked on the film told me, “While there were many monster shots, the one I remember was 10,000 frames of Dr Ryan Stone in full sunlight, not obscured by anything,  sim’ing her spacesuit throughout. I had to pick moments every 1,000-2,000 frames where I could start new sims and blend in/out.”

Director Alejandro G. Iñárritu, teaming up with DP Emmanuel Lubezki, made Birdman play out as if it was filmed in just one take. Numerous scenes were stitched together via many sleight of hand techniques, such as entering a dark doorway, panning, or having the camera rise up. Rodeo FX helped craft the transitions, as well as several VFX moments in the film. Some of the memorable scenes involve the characters looking at themselves in dressing room mirrors (here, the actors were rotoscoped out of the frames and the environments re-built, since the crew was reflected in the original footage).

If you can stomach it, the six-minute scene of Leonardo DiCaprio getting attacked by a bear in Alejandro G. Iñárritu’s The Revenant is one of the best examples of combining live-action, stunts, make-up effects and digital visual effects during a continuous ‘single’ take. Once again, cinematographer Emmanuel Lubezki was involved here, and with significant contributions from stunts, costumes, make-up and VFX, the attack plays out as a captivating oner. DiCaprio was pushed and pulled with wire rigs, and sometimes tackled by a stunt performer in a blue-screened bear suit. ILM realized the CG bear, along with the transitions required between multiple takes to make it appear as if there were no cuts.

This one-take in Better Call Saul lasts for 4 minutes 22 seconds and totals 6,300 frames. Velocity FX handled the VFX work, which involved matte paintings, animation, 3D and 2D elements and A LOT of rotoscoping. One fun aspect of the shot involved the transition, during shooting, from on-the-ground Steadicam to a crane, golf cart and then once more to being on foot.

Alfonso Cuarón was at his oner-best again with Roma, including for the film’s dramatic beach sequence in which Mexican live-in maid Cleodegaria ‘Cleo’ Gutiérrez rescues two children from the ocean despite not being able to swim. Here, a camera on a crane arm extended from rigging built out into the shallows captured multiple plates of Cleo wading out to sea, which were combined in compositing by MPC to deal with the plates having been shot at different times of day, to make the water feel deeper and sometimes rougher, and to alter the views of the sun and sky.

Best of the rest

Superman (1978) – In this scene, Superman flies off from the balcony of Lois Lane’s apartment, the camera then pans with Lois as she answers the front door to Clark Kent (with no cut). But, how? Well, Margot Kidder as Lane was watching a rear-projection screen of Superman pre-filmed with Christopher Reeve on wires. Reeve, as Kent, was then always just waiting at the door for the scene with Kidder. For more on this spectacular moment, check out Todd Vaziri’s thread on Twitter.

Forrest Gump (1994) – The artistry of paint and digital compositing allowed ILM to integrate a real floating feather into the lengthy single camera move for the opening credits sequence.

The Birdcage (1996) – The opening shot glides across the ocean towards Miami and transitions into a street scene, with Illusion Arts combining helicopter and Steadicam plates (and guess who was the cinematographer: yep, Emmanuel Lubezki).

Contact (1997) – The mirror shot. What else needs to be said about the brilliance of Imageworks here. It’s still one of the hands-down ‘how did they do that?’ shots ever in VFX. And, yes, the opening pullback scene in Contact is of course another fantastic long shot, also realized by Imageworks (I’m probably going to have to do a different story about great pullbacks in history now…).

Kylie Minogue ‘Come Into My World’ (2002) – Michel Gondry directed this ‘looped’ music video, and his brother, Olivier Gondry, handled the VFX work. Still hard to work out how they did it sometimes.

War of the Worlds (2005) – Tom Cruise and family make their escape in a seamless oner that swings in and around the van they’re driving in, care of VFX from ILM.

Atonement (2007) – A live-action beach scene set on Dunkirk lasted for 5 minutes and 27 seconds of screen time, with VFX by DNEG.

Kingsman: The Secret Service (2014) – The church fight isn’t quite a complete oner (there’s 3 cuts in there), but it does play out almost as if it’s a single take. Prime Focus handled transitions and gore. For Kingsman: The Golden Circle, Imageworks delivered VFX for some long takes in the diner fight.

Escape at Dannemora – ‘Part 5’ (2018) – A nine minute one-take reveals how prisoner David Sweat’s (Paul Dano) did a trial run for his prison breakout. Multiple locations and set pieces were filmed here, and combined by Phosphene.

The Commuter (2018) – Really? The Commuter? Really? It might not be the greatest film of all time, but it does have this crazy on-train fight sequence featuring Liam Neeson that was made up of 14 different takes stitched together by Cinesite.

A final note – Some oners are Texas Switches, which I wrote about here. And they’re spectacular.

What have I missed? Tell me in the comments.