The new tools developed for the film, and a history of vegetation tech at the studio.

Over the course of its CG animated films, Walt Disney Animation Studios has built many tools to help realize complex worlds, water, fire and snow simulations, character animation and – notably – trees. The tools include both off-the-shelf pieces of software like Maya and Houdini, as well as several proprietary developments.

At SIGGRAPH Asia 2019 in Brisbane, Walt Disney Animation Studios studio CG supervisor Ernest Petti recounted the studio’s major leaps forward in CG trees and foliage, starting with Chicken Little, which featured relatively simple trees, through to the just-released Frozen 2, where the Enchanted Forest was made up of ‘islands’ of trees with distinctive leaves and foliage, and for which WDAS developed some new specific tools to handle the work.

befores & afters attended Petti’s talk at SIGGRAPH Asia, and also got a chance to chat to him at the conference about the continual development of tree and vegetation tools at the studio.

“In a lot of our films,” stated Petti, in recounting the developments up to and including Frozen 2, “we have tried to strike the balance between artistic stylization and procedural simulation to make sure we have the complexity and richness that we want and yet still have the stylization that we need. We’ve worked over time to build the tools to give that stylization for, say, a single tree and then you place them to get a cluster of that looks nice.

“But now when you have a whole forest that has a certain level of stylization to it and it has a lot of depth to the ground cover and the pebbles and everything else around it as well, we needed to improve our toolset so that we would not only have that balance of stylization and complexity on the single tree level and then make a whole forest of them, but [so that we could] stylize the appearance of the forest as well.”

Here, based on Petti’s observations, we run down the history of tree and vegetation development at Walt Disney Animation Studios, including the new developments for Frozen 2. 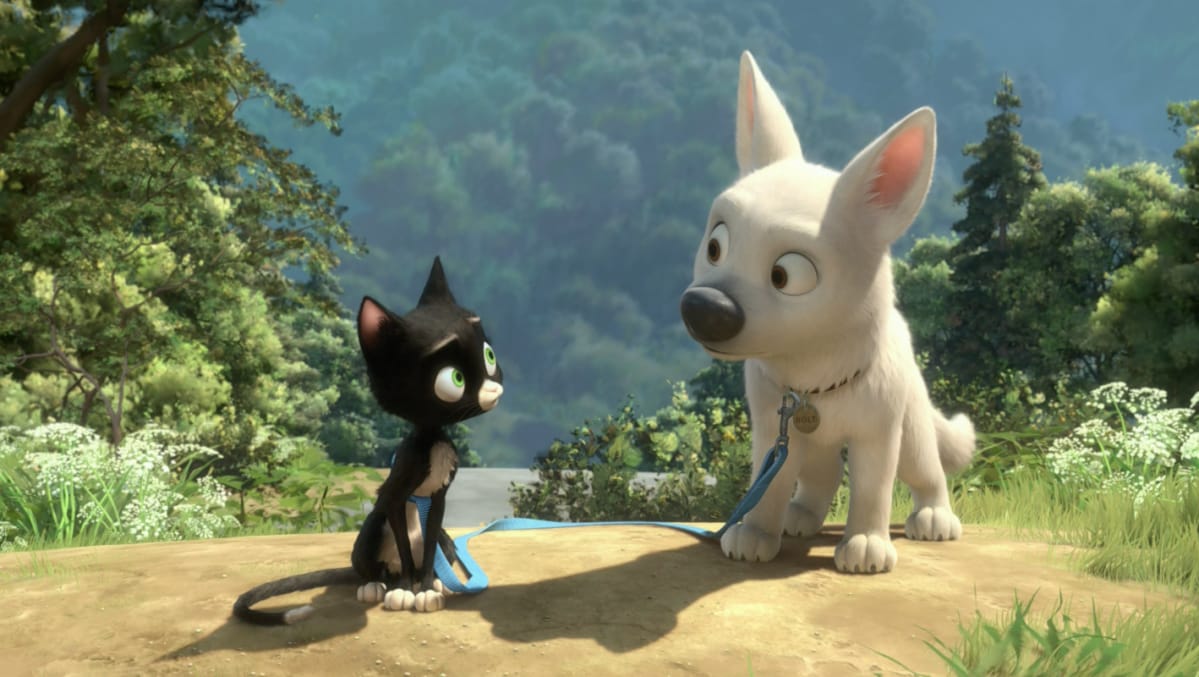 On Chicken Little, the trees were all hand-modeled. Artists populated the leaves, but they didn’t move and it was pretty basic. Bolt had more lush environments and needed a more natural feel to it. However, the studio was still exploring vegetation tech and how much to push it. Plus, the film generally had a more stylized look to it. At this point, Disney XGen was used. It was developed in around 2005 and continues to be used today for instancing points to surfaces to enable the generation of grass, leaves, pebbles, hair or fur. Another tool called ‘Part2Rib’ was an instancing tool used on the film for effects like water, fire and smoke. For Bolt, there were mostly sparse single trees, sometimes coupled together for a forest, but they weren’t handled in any special way.

Here, the studio had a film that mostly takes place in a forest. Going with single populated trees would not have worked here; it would have been an incredibly slow process. XGen was relied upon, while a new set of ‘Tree Tools’ were developed to sketch trees from curves. Then, an interactive particle marching engine called Dendro provided for the instancing of smaller branches and enabled some procedural animation and growth on top of those. It still allowed for a clear silhouette and stylized look of the trees to remain, an important factor for the film.

The work was presentation at SIGGRAPH 2010 in a Talk by Shek, A., Lacewell, D., Selle, A., Teece, D., Thompson, T. called ‘Art-directing Disney’s Tangled Procedural Trees’.

On Frozen, the trees required were even more stylized than Tangled, and required very specific tree shapes. The studio developed Bonsai for the project as a full tree authoring and growth tool. Bonsai replaced Dendro and some other tools, and is essentially a fully procedural system. With Bonsai, the studio was able to build a larger library of bushes and trees and other vegetation. At the same time, artists could build a library that could be shared across shows. It meant different trees could be developed and re-used on multiple shows.

While this film was not one that involved large organic environments, it was where Disney Animation implemented its own in-house path trace renderer, Hyperion, and Aurora, a procedural instancing system. This proved to be a major asset in realizing a huge city and its many buildings.

Disney Animation was then able to approach Zootopia armed with the new Hyperion renderer to craft a world with multiple unique environments, including tree-filled ones. This meant lots of lush vegetation, which was a key aspect of the rainforest district seen in the film. The studio needed to craft not just trees, but all kinds of undercover foliage as well.

Here, the studio still relied on Bonsai and XGen, but these tools were extended to allow further scale and optimizations.  The instancing test shown above simulated a forest with 100 million foreground trees and 7.5 million background trees. Artists also took advantage of other species being developed for other films, like Moana, to help populate the jungle.

The work for Zootopia was discussed at SIGGRAPH 2016 in a Talk by Hans Keim, Maryann Simmons, Daniel Teece, Jared Reisweber and Sara Drakeley called ‘Art-Directable Procedural Vegetation in Disney’s Zootopia’.

While water simulation was an enormous part of Moana, so too was vegetation. Even more vegetation and different species were required for the film; again, it was all about scale. The studio took unique species in the South Pacific and boiled them down to somewhat simplified (ie. stylized) silhouettes  for the way they looked on the island. They were stylized at the individual tree level and forest level, ultimately to provide a sense of the massing of the trees and shrubs together on the island. There was also technology that had been developed to procedurally grow trees from nothing, and this came to the fore with the Te Fiti sequence in which she ‘heals’ the ocean and island environments.

WDAS actually released a publicly available data set for a Moana island scene, which of course includes many of these trees, plus a detailed description of the scene which also covers the way that XGen and Bonsai work.

Now we get to WDAS’ latest release. In the visual development for Frozen 2, trees in the Enchanted Forest were based on concept art that Eyvind Earle had actually done for Sleeping Beauty, and from research conducted at forests in Norway, Finland and Iceland. What the studio wanted to do was reflect not only the stylized nature of the individual trees, but also the grouping of them as well. This led to the development of ‘deeply nested proceduralism’ into XGen and Aurora.

Doing it this way meant artists could stylize but also build up and populate at each of those different levels. What also aided the process of building up vegetation was a new tool called Droplet that was essentially a procedural geometry painting interface that let artists ‘paint down’ the trees in a more painterly fashion. That gave, says Petti, “more direct control over the style and flow of the forest as a whole and all of the trees throughout it.”

So, once you go and see Frozen 2 – and maybe on your fourth or fifth viewings (!) – don’t forget to check out the trees in the film. They certainly have some history behind them.

If you want to read more about technological developments at Walt Disney Animation Studios, they have a whole dedicated section at their website: https://www.technology.disneyanimation.com/