A lot of characters in Joachim Rønning’s Maleficent: Mistress of Evil have wings.

But since all these wings would be computer-generated creations, the filmmakers needed a way to ensure the performers looked like they were carrying around that extra weight on their backs during filming.

However, that didn’t mean they were filmed with pretend or practical wings during shots; instead, there was a rehearsal process that involved giving the actors backpacks with gray foam wings on them.

“The backpacks had gray wings sculpted by the prosthetics department and they were approximately the right size and the right shape,” says Maleficent: Mistress of Evil visual effects supervisor Gary Brozenich, who also hails from MPC, the lead vendor on the show. “The performers could get used to how space works when you have this whole other appendage on your back.”

In addition to helping understand the weight, the backpack contraption allowed actors to picture how much volume and space they would take up in a scene when their ‘real’ wings were added. “It changed the way that they moved,” notes Brozenich. “It made them stand up straighter. Their backs were held differently and they posed themselves in a different way after we went through that process.”

“Then, when we were filming, they would just have these pads that were prosthetically glued to their backs and then there were tracking stubs velcro’d on. The stubs were little blue things with tracking markers that the witness cameras could see.”

These witness cameras played a key role in helping to track the markers that stood in for where the CG wings would be placed. Brozenich says, though, that the tracking and matchmove process – for bodies, markers and the plate in general – was essentially a brute force approach, as was the roto necessary to isolate characters and prep the plates for CG integration.

On set, the usual set surveying, photography and lidar scans were done. This included relying on a prop feathered wing that had already been constructed for the first film for lighting reference. “That was the heaviest prop reference I’ve ever had on a film,” recalls Brozenich. “It took two people to carry it in every time. It actually had a full metal armature inside of it. It wasn’t articulated, but it was constructed in a way that was – well, put it this way, if they make Maleficent 3, I’m sure they’ll use it again. It’ll still be there long after we’re all gone.”

The winged characters in Maleficent: Mistress of Evil were broken down into four different biomes, i.e. originating from different environments on Earth. That meant characters would have different kinds of wings. Then, of course, Angelina Jolie’s central character of Maleficent employed wings that were almost characters of their own. To help define that character, MPC visual effects supervisor Ferran Domenech was engaged directly to assist in sculpting Jolie’s wing performance. 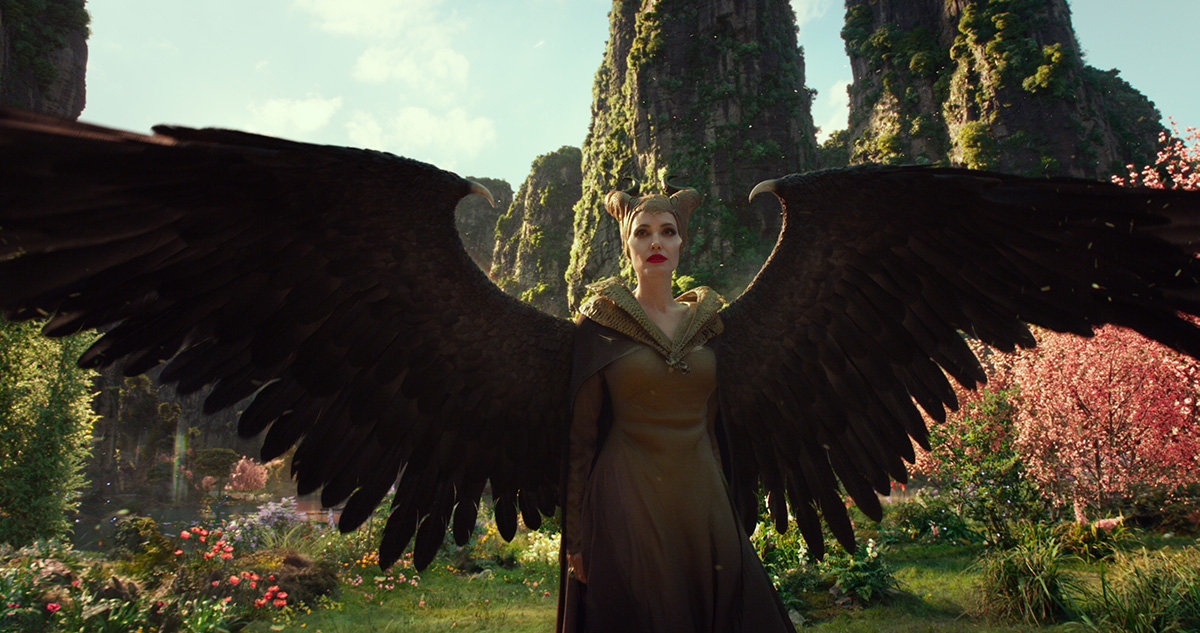 “The wings are obviously an extension physically of the character,” notes Brozenich. “Emotionally, they’re an extension as well. We could very easily interrupt or step on a performance with overzealous animation or not really punctuate the moment by underperforming animation. So, Ferran spent time with Angelina going through an emotional beat sheet for poses and ideas of what she believed her wings would be doing to support the performance.”

In terms of building the wings, MPC has over several years refined its fur and feathers tool called Furtility, and this was used on Mistress of Evil. However, since the wings were vast CG elements, they tended to be more geometry-based, says Brozenich. “There’s a lot of feathers and a lot of wings in a lot of shots on a lot of characters. The overhead associated with a curved-based system like Furtility where each part of the feather is being represented through a curve or a guide curve group wasn’t really a practical solution.”

Wings that fly (and that are just ‘there’)

Although the first Maleficent film had featured wings, the sequel had so many more characters walking, talking and flying – constantly. So, a new round of research was undertaken for this part of the characters.

“The way we approached it was, we really wanted to go for more of a predatory feel, like birds of prey and how they fly and how they work,” outlines MPC animation supervisor Seng Lau. “We did a lot of tests and studies on birds and heavy birds, specifically eagles, looking at the anatomy of how the wings would perhaps be attached to their shoulder blades or how much the actual arms, for instance, would move with each flap of the wing.”

Flying scenes – often involving dynamic moves and several battle moments – were key to the film. But just as important were moments when the characters were simply sitting, talking or only slightly moving in a scene. Says Lau: “There’s little instances where if Maleficent shrugs her shoulders or something, we’ll do a similar thing with the wings. Or if she looks at something, we might point the wings in that direction. Or if she’s angry, we’ll have them bristle up and raise more in a threatening manner. Say she’s sad, then they’ll droop slightly. We’ve tried to basically just add a little bit of character acting in the wings. This was all the way from heavy action flying to really subtle acting.”

This subtle approach extended to scenes where the wings would be folded up ‘at rest’. Here, the animation team concentrated on the graphic image of what a winged character would look like. “We had a lot of controls, right down to the grouping of feathers,” says Lau. “For Maleficent, everything was folded in a way to achieve that really graphic look when she’s resting and to frame her face from each camera angle to be as graphic as possible. We would have specific blend shapes to get into the exact image that we wanted for each shot.”