A recently released VFX breakdown of Method Studios’ work on John Wick: Chapter 3 – Parabellum revealed a myriad invisible effects for the film, including two fight scenes involving breaking glass. The first is an antiques store featuring a hallway of weapons behind cabinets of glass. The second occurs in a two-storey office building made entirely of glass.

What was stunning in Method Studios’ breakdown, apart from the incredible stunt work and practical special effects in those scenes, was learning that much of the glass was not actually real, but instead added in post-production by the visual effects studio.

Amazed at the intricacies of those shots, I decided to ask production visual effects supervisor Rob Nederhorst more about how the glass VFX was done. He outlined the methodology for the glass breaking shots, what real glass was utilized, the safety considerations that came into play, and how the scenes were filmed. (In Part 2 of this story, I talk with Method Studios about their digital glass effects).

‘We’re gonna have to do a lot of glass’

The glass office was, not surprisingly, a major glass build. After months of planning (including the use of VR and real-time rendering to conceptualize the office), construction on the structure would begin. This started with the distinctive panes of thick glass pieces.

“The used a low-iron glass because that way you don’t get that green color that you get with higher iron glass,” outlines Nederhorst. “The thing is, you can’t just go to Home Depot or Lowe’s and say, ‘Can you give me 700 pieces of thick glass?’ It was all custom-made and there’s only so many places in the United States that can even make that stuff.”

This glass would make up the central structure of the office building, and only appear to break for one major floor smashing moment (more on that below). The main glass breaking moments were inside the office where John Wick (Keanu Reeves) ‘ping-pongs’ between glass cabinets – his adversaries crash through them too. The ping-pong moment was orchestrated with the aid of CG glass. 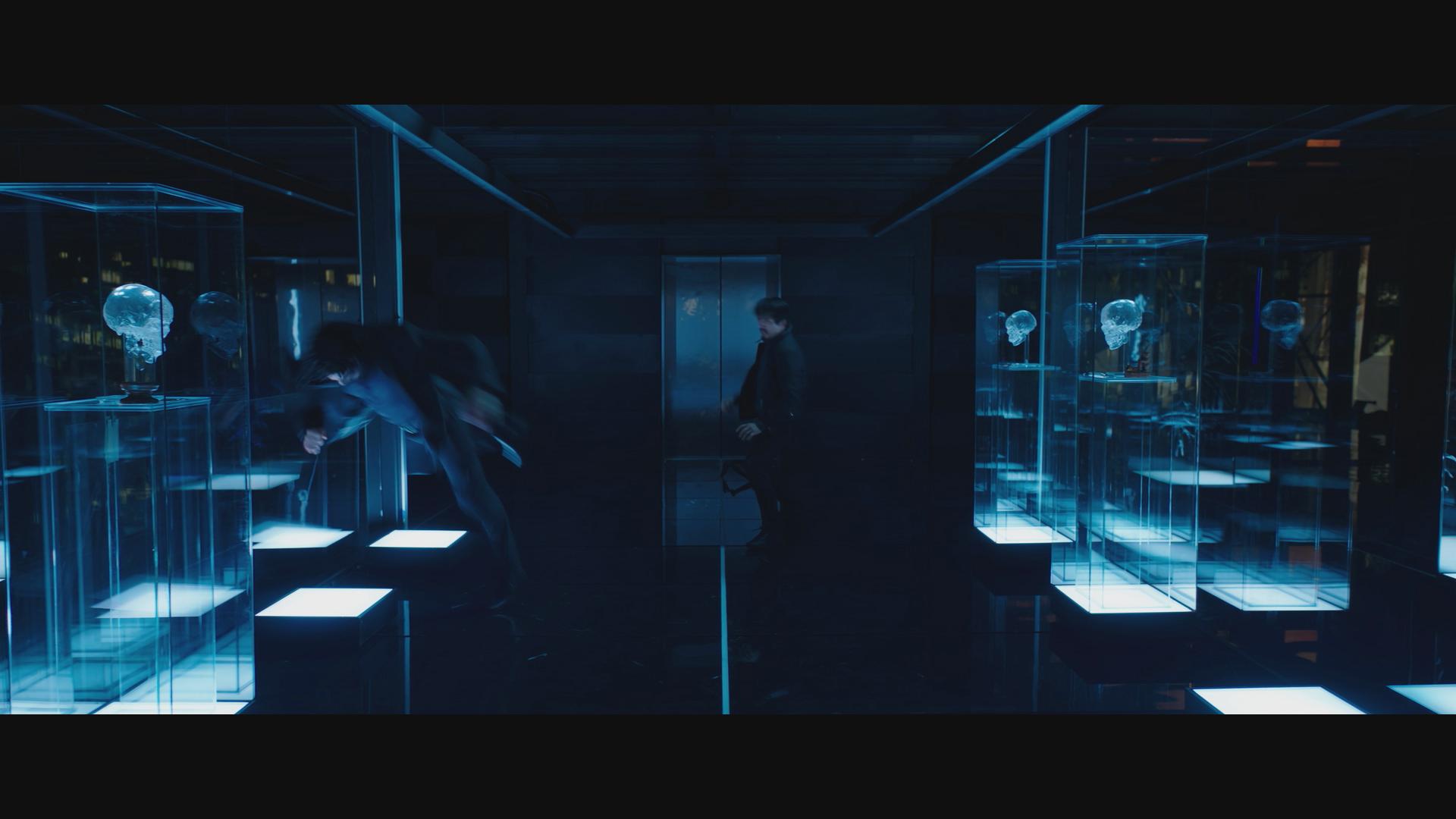 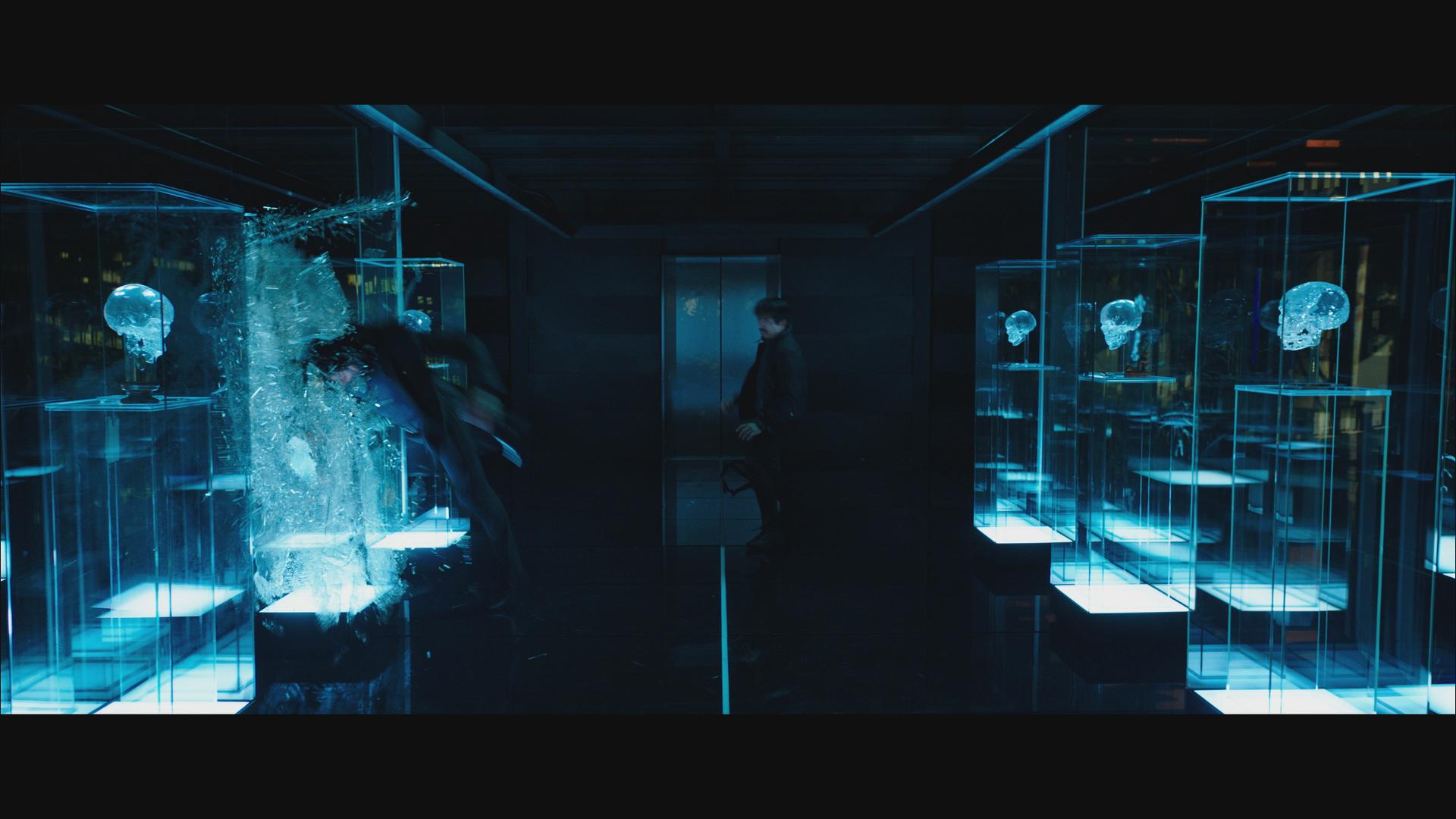 However, those glass cabinets were actually constructed for real and set to explode on cue. “A decent part of it was done with SFX putting charges on the bottom,” notes Nederhorst. “Now, what happened on the big glass smashing moment where you see Wick ping-ponging between the cabinets was that we did the first take and only one cabinet broke. The timing was wrong and then it just domino’ed the other cabinets.”

Nederhorst was not personally on the set when this scene was being shot to witness the glass cabinets moment not working as planned. Instead, he was shooting scenes for the film’s motorcycle chase. “I get a phone call at midnight and I’m on this bridge, and it’s my producer, Kerry Joseph, and he goes, ‘We’re gonna have to do a lot of glass.’ I said, ‘Why is that?’ He said, ‘Well, let me send you something.’ He sends me a video through and I see it and I, and I’m like, ‘Hey, that’s cool. Oh, oh no. Oh, that’s not…oh boy. Oh, that’s not good.’ I knew at that point that we were going to be doing just a ton of glass.”

“In the end,” says Nederhorst, “there’s two moments in the office building with real glass. One, there’s a cabinet on the lower level where Wick kind of comes back into camera and then there’s another one where he kicks a henchman into a cabinet that then explodes. The rest of it is all digital glass.”

The reasons for such a large digital intervention, notwithstanding any stunts that didn’t quite go as planned, were mainly because of reset times and safety, notes Nederhorst.

“If you have real glass that breaks, you have to completely clean up the entire set with brooms, with vacuums, with wipe-downs, the whole thing. Because, if you’ve got people wrestling on the ground, you’ve got somebody hitting their head. If there’s a piece of glass and they get cut, now you’ve got to get the medic involved. Maybe they have to put in a stitch or something else. The minute that you mess with the reset time on set and you make the live action shooting take longer, now you have a real logistics problem. That can grow exponentially into the six figure range very, very quickly, because you’ve got 150 people on set, sitting around doing nothing.”

For example, adds Nederhorst, it took the crew almost an hour to reset following the initial ping-pong cabinet moment. “Now let’s say they had to do that three times. That’s three hours. That’s a third of a day. That’s not good. So the minute they abandoned having to do that, that meant they could shoot it quickly.” 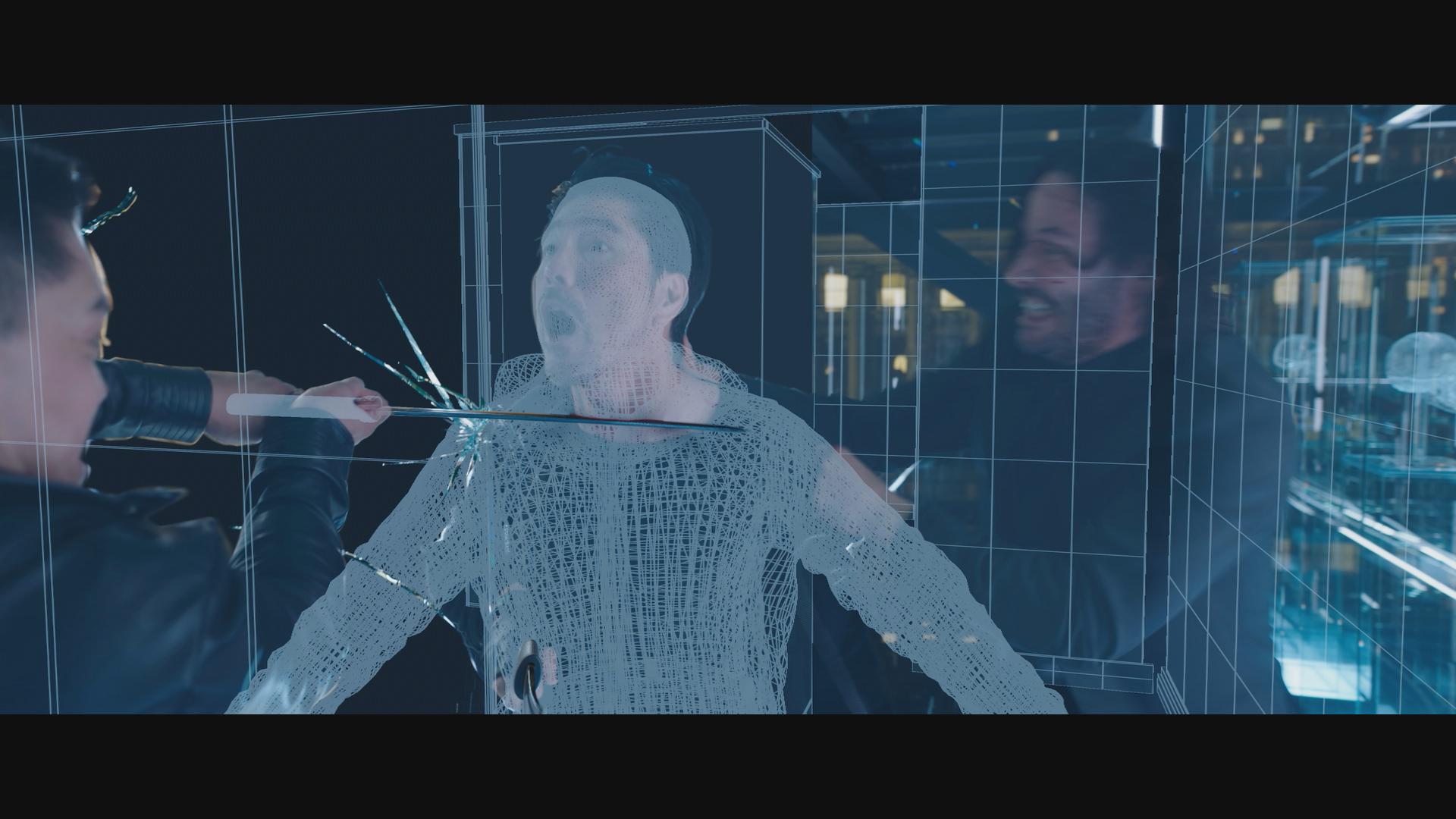 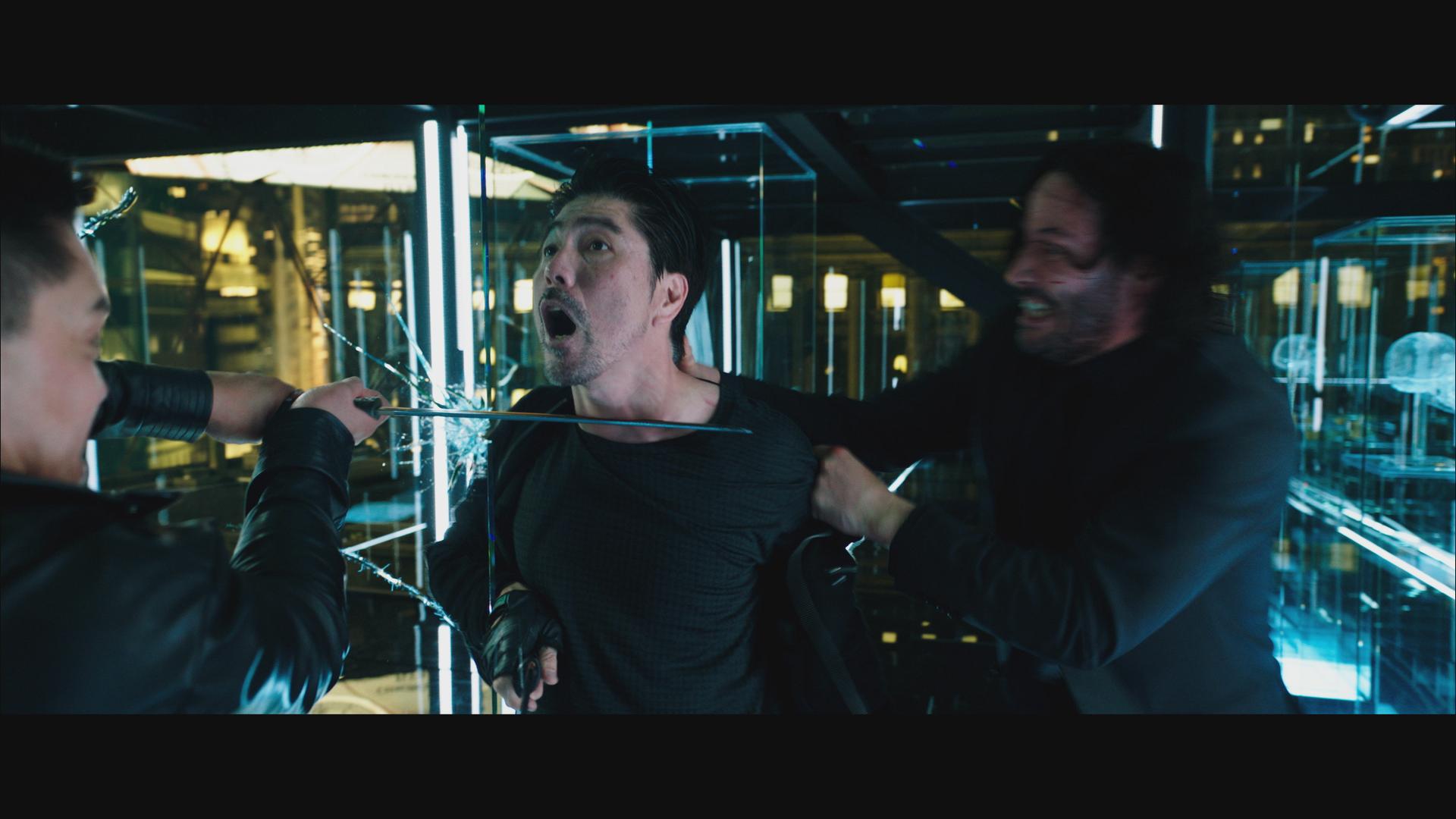 The safety reasons for not filming the fights amongst glass might seem obvious, even though we are talking here about absolute stunt performer pros. However, the glass that does tend to be used for smashing is a kind of ‘rubberized’ glass that, although it looks absolutely like real glass, it crushes into small glass-fragment-looking pieces. And on the floor that stuff suddenly becomes a new hazard altogether.

“The minute you crush it, it splits,” says Nederhorst. “And so now you have slippery rubberized stuff on the ground. So you can’t have a fight scene with people that have to move in certain ways and do a variety of heavily choreographed moves that require precision and timing when you have something slippery there. That becomes another kind of safety concern. Then, if somebody slips and they slip three times and each time you have to do a reset, oh man, that take has gone. And you just keep losing time. You just don’t want to lose the flow, especially with something like Wick, which has such heavy choreography and heavy moves, you can’t do that. People have to stay in the zone.”

Ultimately, doing things this way enabled the cabinet ping-pong shots and another dramatic moment that sees the fighters crash through from the top storey of the office building down to the one below. That was made possible by combining multiple plates, explains Nederhorst. 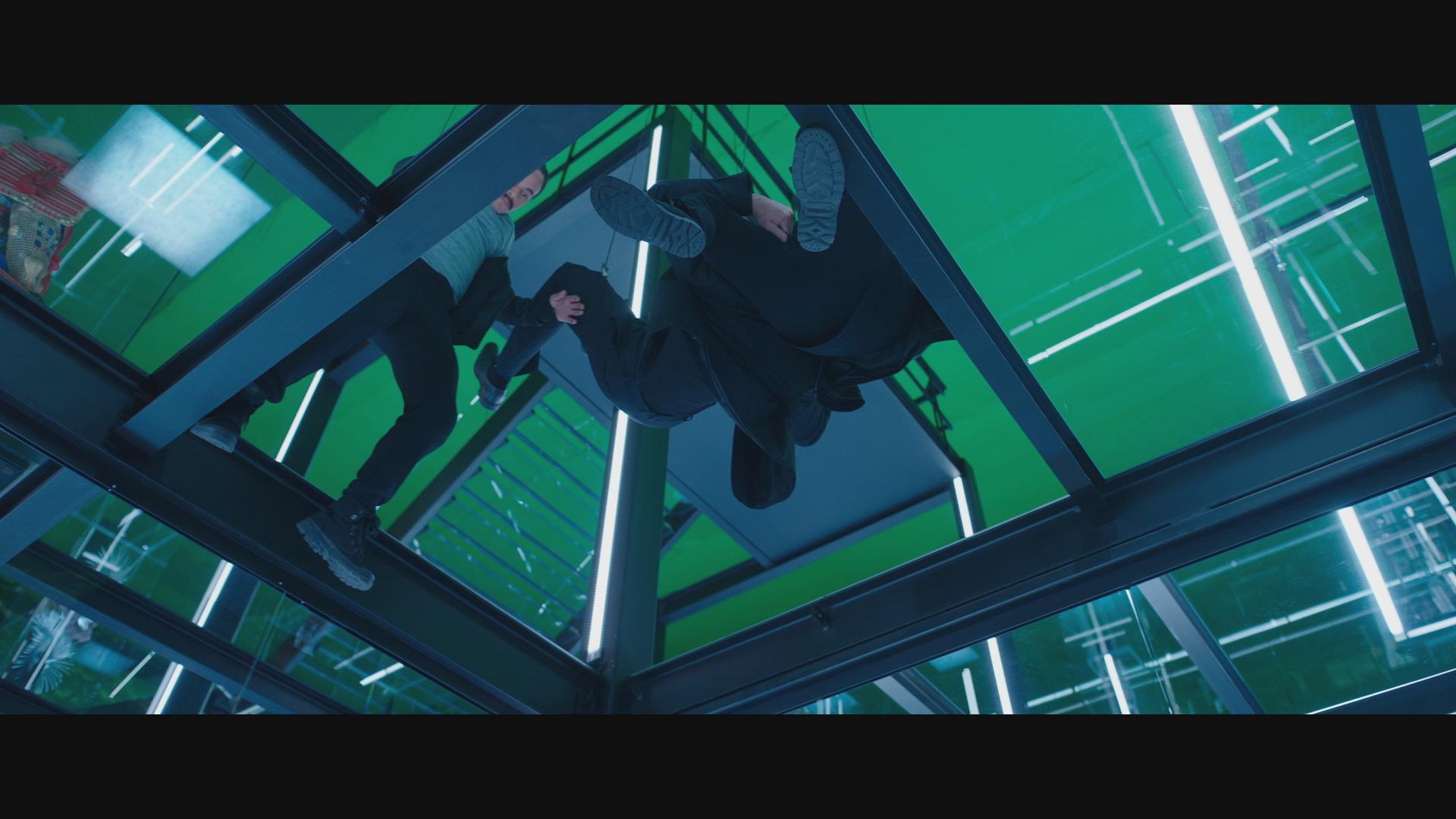 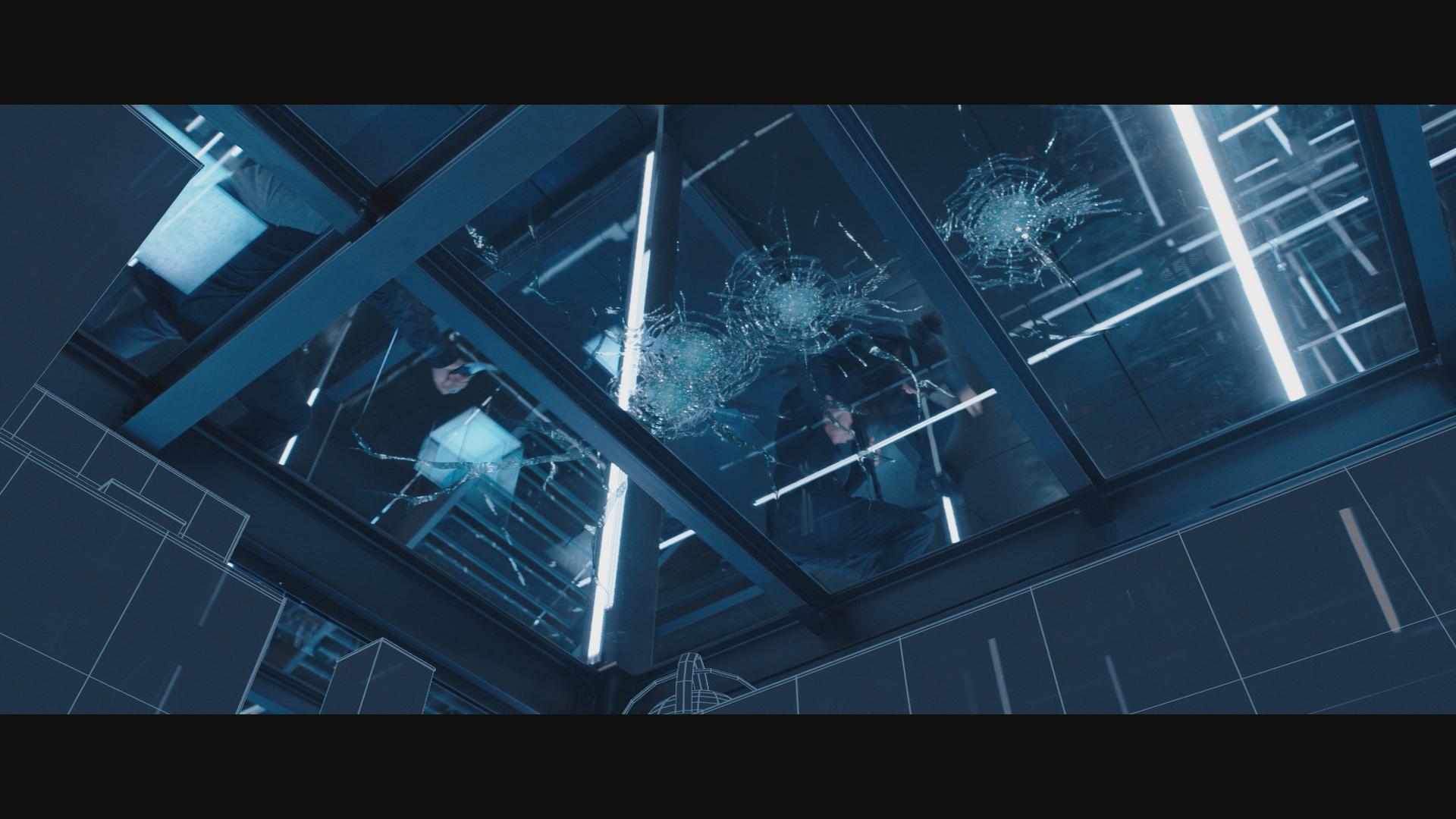 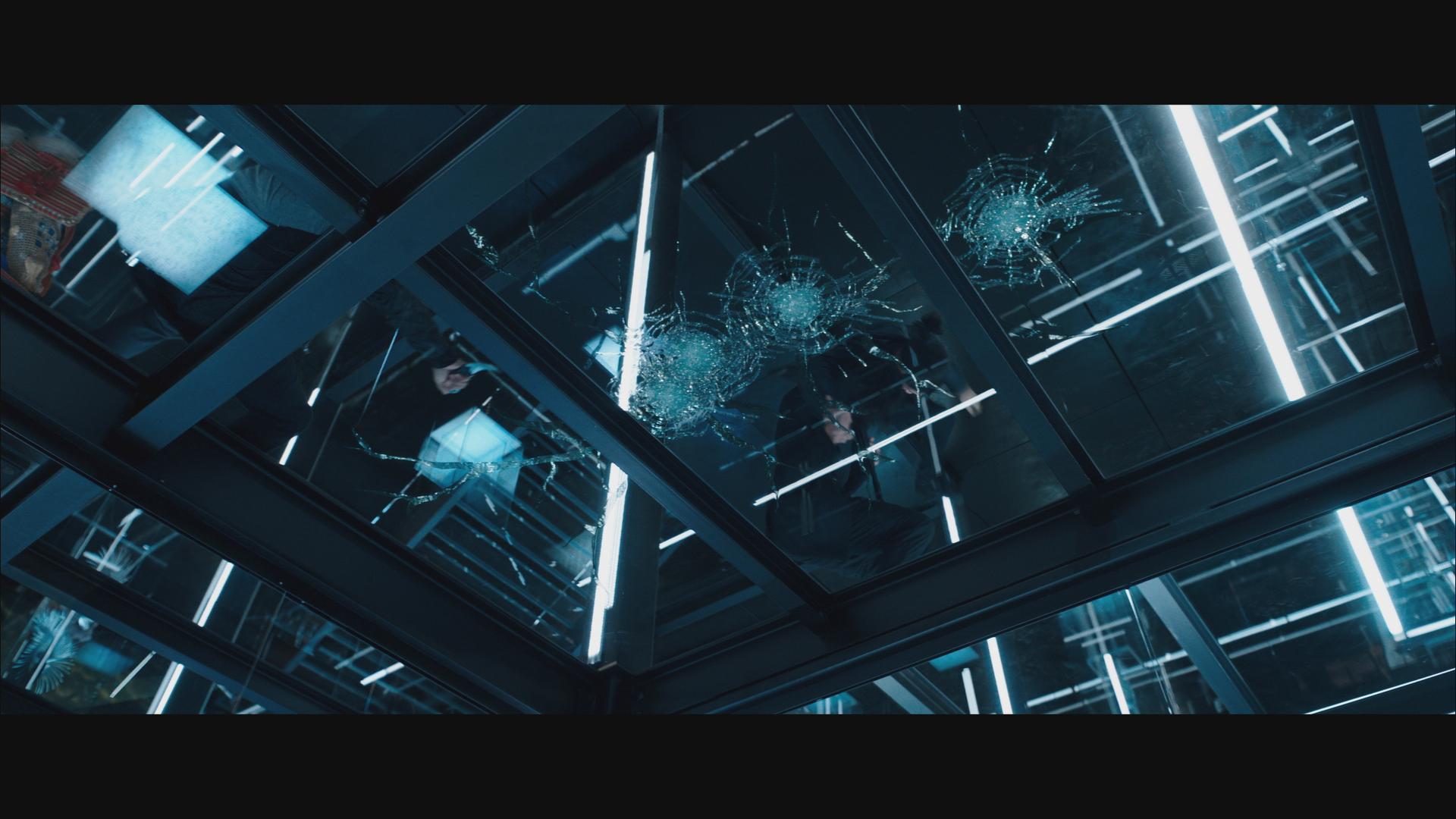 “You’ve got one plate of people lifting up and smashing down onto a glass floor. The camera’s looking up, you keep the camera there, you pull the floor and you have stunt guys on wires and those guys get lowered down at a high rate of speed and they’re the ones who fall on the ground. There was glass already on the ground there – it was rubberized glass because in that case it’s safe since they were just landing on it. And then we added a ton of digital glass coming down with them, because at some point you would see the stuntmen’s face and the stuntmen didn’t look anything, anything at all like the actors. And so we had to, uh, so I said, just put a piece of glass in front of him and bling the glass out. The plate blend was really tricky, but Method really came through for us.”

Meanwhile, no glass was filmed for the antiques hallway fight, where scores of knives and weapons sit behind glass-covered cabinets. Instead, the actors mimed breaking through this glass with their elbows, hands or with weapons, with Method Studios adding in glass, glass breakages and glass remnants later. The main consideration for Nederhorst here was that those antique cabinets had different glass than the office building. “The old school glass in the antique cabinets, it breaks up into medium and large pieces. For that, we did give Method some reference for how that breaking should look, and they would simulate the very distinctive cracks and pieces.”

Before the Method commenced working on both the antiques hallway and glass office building scenes, there was a significant effort at the production level to scan the locations and acquire reference photography. That scanning was overseen by John Ashby of Aura FX. “John did a full lidar and photogrammetry scans of every single set in the entire movie,” states Nederhorst. “So every single nut bolt, mouse dropping, everything. If it was in there, we scanned it and we photographed the crap out of it. We had extensive data on all the sets.” 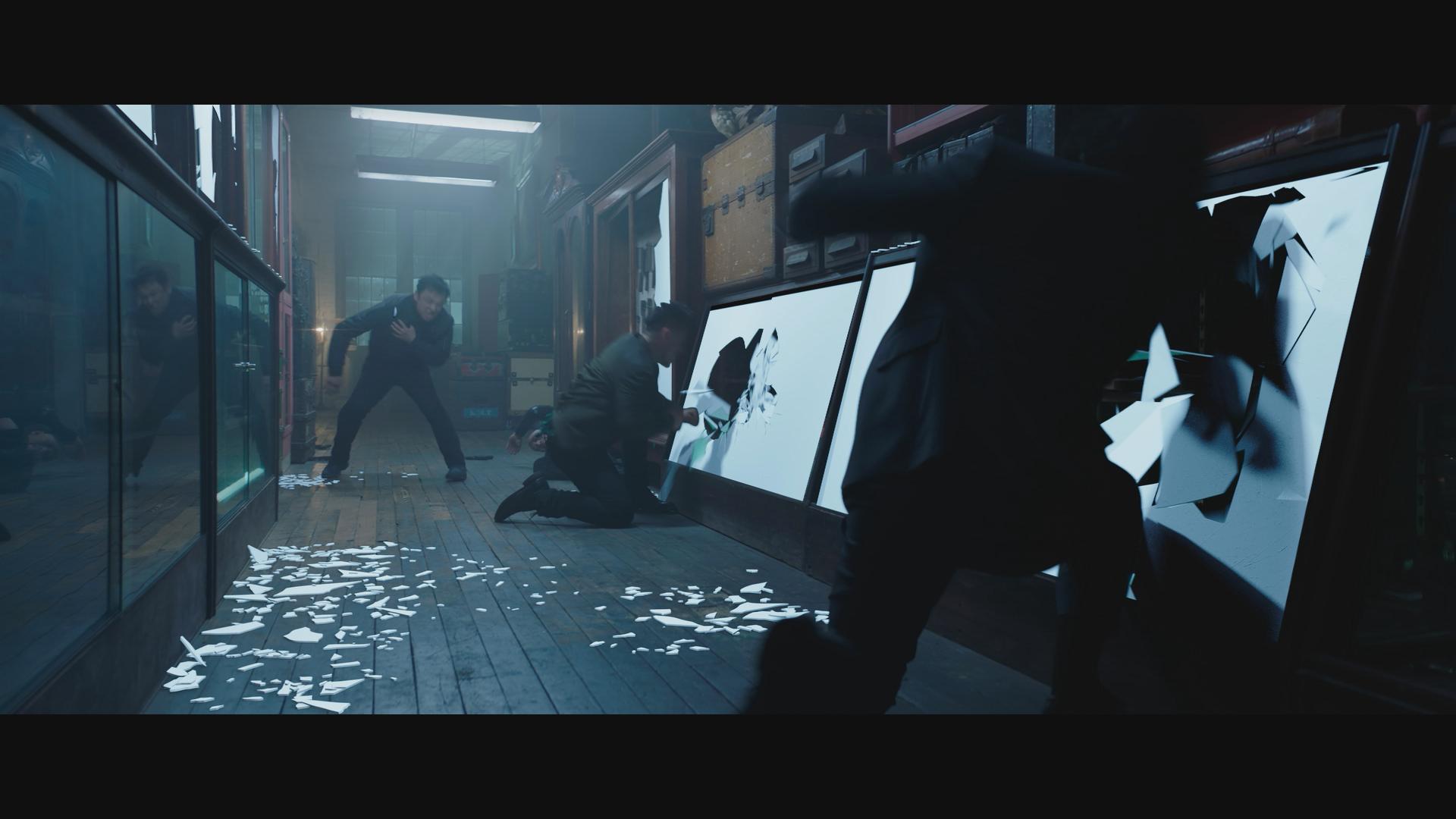 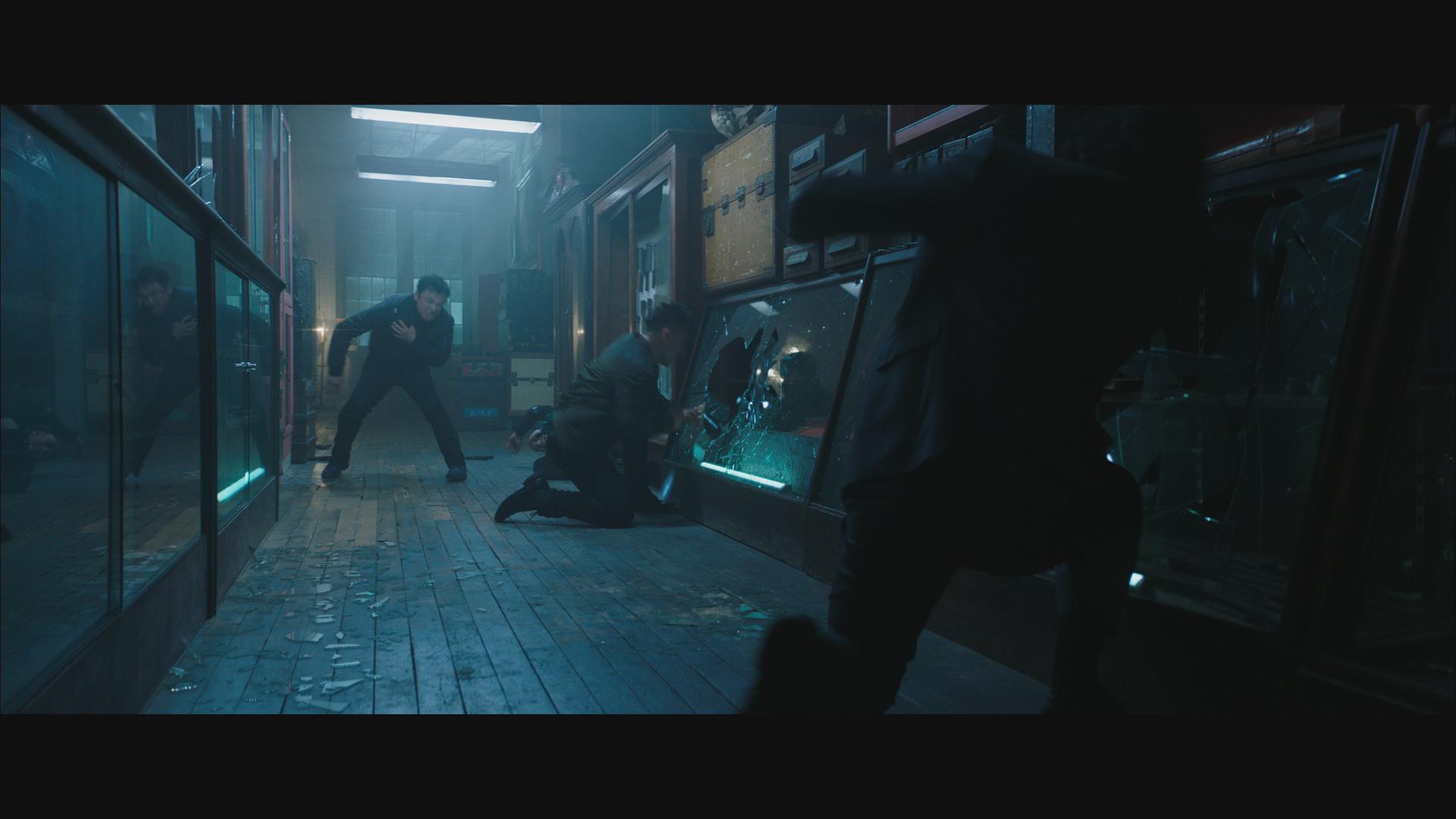 In Part 2, there’s be more on the antiques hallway fight and Method’s approach to using all that scan data, tracking and matchmoving the actors in the scenes, simulating breaking glass, and compositing this altogether.