The final visual effects shots in Guy Ritchie’s Aladdin include rich synthetic environments, an animated magic carpet, several digital animal characters such as Abu, Rajah, and Iago, and, of course, the completely computer-generated 3D photoreal blue Genie, an ILM creation based on a performance captured Will Smith.

With so many CG elements, the film was always going to involve a significant previs and postvis effort. Postvis can be helpful, in particular, for piecing together the edit of a VFX-heavy film, since live-action plates that will later require a CG Genie to be added, say, make a lot more sense in editing and in review screenings with at least some kind of representation of the Genie in the frame.

[perfectpullquote align=”right” bordertop=”false” cite=”” link=”” color=”” class=”” size=””]’It was like storyboarding to the next level.'[/perfectpullquote]

Postvis certainly filled that role on Aladdin and remained a crucial part of making the film, but one challenging aspect on Aladdin was that the CG elements, such as Genie or Abu, had so much ‘personality’, not something that stand-in postvis CG characters are always able to provide since they can often be there primarily for layout and blocking while the final CG is being worked on.

That meant Aladdin’s filmmakers had to re-think postvis for the film. In a process driven by production visual effects supervisor Chas Jarrett, a team of experienced traditional 2D animators came on board, initially to provide early animatics, but later after the live-action shoot to provide 2D animation and animatics for just about all the CG characters.

The result was that they could iterate quickly on ideas and timing, shot-by-shot, and provide a very convincing sense of what the final scene would look and ‘feel’ like, especially where more elaborate VFX were required. Importantly, their work could also be quickly composited with live-action frames and brought into the edit and then early screenings.

befores & afters caught up with Jarrett to run down just how the 2D animatics process worked on Aladdin, including details on some of the animators behind the work, how the process helped inform the edit and the final visual effects work, and where in the film you can actually still see one of the 2D animator’s handiwork.

Many of Aladdin’s sequences – the big songs and the big set-pieces – were previs’d before any live-action was filmed. Realizing that previs could be relatively time-consuming, the production brought on at that early stage a number of traditional animators. “For one of the sequences in particular, ‘A Friend Like Me’, the animators threw around some ideas before previs really got stuck into it,” says Jarrett.

[perfectpullquote align=”right” bordertop=”false” cite=”” link=”” color=”” class=”” size=””]’What we found with the drawn animation was that even the simplest line drawings conveyed so much about what the characters were doing.'[/perfectpullquote]

“These animators just brought this sort of storytelling ability, and this notion of caricature, and characterizing the things they were drawing. And they brought this wealth of knowledge with them, that was just really, really fun to work with. They had such great ideas and could really quickly sketch out thoughts.”

Jarrett describes the experience as “storyboarding to the next level,” nothing that Guy Ritchie also responded positively to what the 2D animators were producing. “What we found with the drawn animation was that even the simplest line drawings conveyed so much about what the characters were doing and what was going to be happening, and conveyed it in such a pleasing way to the eye that you could forgive almost any level of 2D quality. It didn’t really matter what it looked like quality-wise. It just had this real soul to it.”

Ultimately those early 2D animations proved to be a terrific guide for the previs team, says Jarrett. “It also let us experiment with Genie, and what he was going to be like in a way the previs never really would have been able to do, somehow. I think that’s just because it was so much more playful, and quick to turn around.”

Jarrett certainly gives enormous credit to the traditional animators for their contributions to Aladdin. One of the first 2D animator hires on the show was Dino Athanassiou. Another artist early onto the film was Michael Schlingmann. “He’s been around the Soho animation scene for decades,” recounts Jarrett. “And he’s a bit like the embodiment of a Genie, to be honest. He’s a cauldron of ideas and sizzling energy. He’s just so full of thoughts, and random ideas. So he was a good person to have on the team, because he was just always throwing out thoughts, and ideas and inventiveness.” 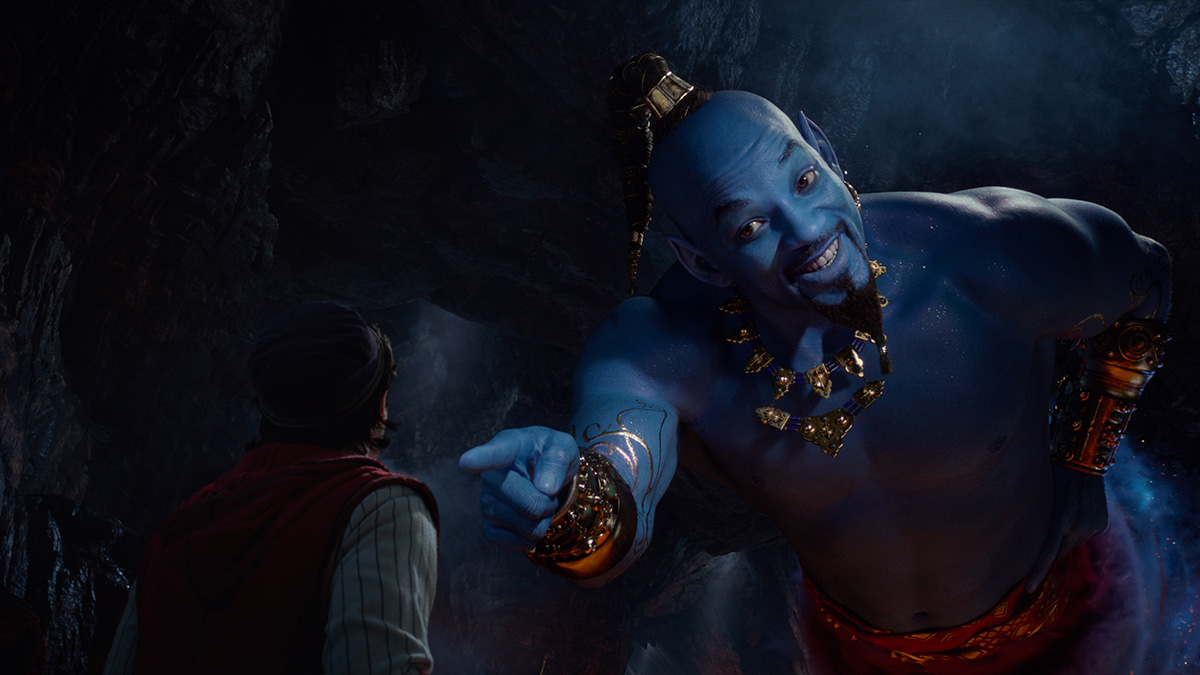 2D, during the edit

After the live-action shoot, the editing stage of the film began. One of the very challenging aspects at this stage was that ‘pieces’ of scenes had been filmed that would ultimately require a great deal of visual effects work. For example, for scenes with the blue Genie performing large dance or song numbers, Smith had been filmed on set in an ILM Imocap suit and been captured with various facial capture processes. The final shots might be informed by the actor’s on-set performance or involve moves that he physically wouldn’t be able to do.

“And so,” explains Jarrett, “the editor, James Herbert, had carte blanche to cut around Will’s performance, and cut it any way he wanted. There would also be the re-working of dialogue, and re-working the staging of scenes, without necessarily paying too much attention to what Will Smith would do in the plates.”

“By that, I mean we got to really embellish the sequences in post. We added a lot more dialogue. We add a lot more interaction and magic to the performance during the cut. What that really meant was: you’re trying to watch the edit with Will Smith jumping from position, to position, in three shots. And it was all very confusing.”

At that point, Jarrett saw an opportunity for the 2D animators to contribute drawn animation and help figure out how these elaborate sequences could come together. “We certainly did a fair amount of traditional previs and postvis using CG, but all of the characters – Abu, Iago, Carpet, Rajah and Genie – were all 2D drawn animations for the review screenings. That’s what was in the editor’s cut, essentially.”

The 2D animation wasn’t just for the edit, however. It also helped established, especially for blue Genie, a staging vocabulary for the character. “Things like the way he would move, the way he would shrink, for example,” says Jarrett. “Does he stretch, does he squash, does he pop from one place or another? It might seem simple when you watch it, but actually a lot of thought had to go into that kind of staging.” 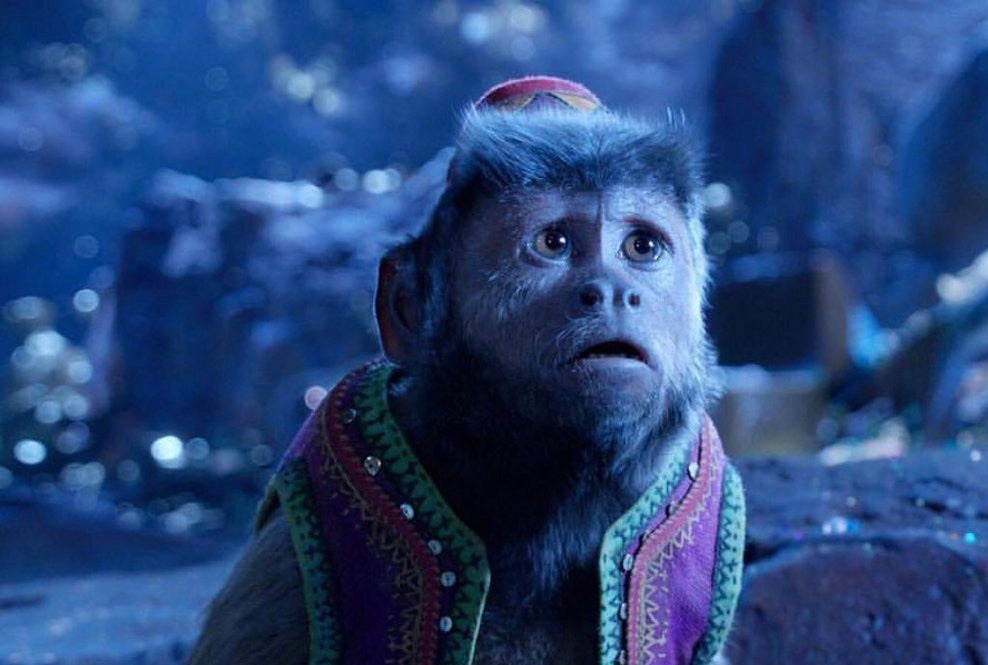 The traditional animators worked in several different ways to provide the 2D animation and animatics. Some utilized TV Paint, others delivered Photoshop frames, while even animation on paper was done and scanned in. “The animators were all very individual,” comments Jarrett. “And that wasn’t a problem at all, particularly in as much as the speed they work at allows them generally to take whole sequences each. So each individual artist would take a sequence, and then you’d get a consistent look through that sequence.”

[perfectpullquote align=”right” bordertop=”false” cite=”” link=”” color=”” class=”” size=””]’I think the most significant element of it all for me was what the animators brought as individuals.'[/perfectpullquote]

The animators would be briefed on the scenes, suggest ideas and submit animation. The quick turnaround allowed for a lot of iteration and revisions (which was always intended). “We were actually still doing 2D animation just past Christmas 2018,” says Jarrett, noting that the VFX work was finally delivered in April 2019. “So there was so much work going into it, but it was just an incredibly quick way of prototyping ideas.”

“I think the most significant element of it all for me was what the animators brought as individuals,” adds Jarrett. “They have a fantastic sense of movement, and staging, and how you make a sequence play out, and how you just get the most out of the character. And it is just that simple raw talent and their insight into what makes an impact in animation that really helped. Not that we don’t have many, many animators in CG who also have these sensibilities, but CG teams have to work in big groups, and the technical side can slow the creative process down. The 2D animators just didn’t suffer from that.”

One piece of actual 2D animation – by Michael Schlingmann – did make it into the film, as Jarrett describes: “There’s a sequence with Aladdin and Jasmine in her chambers, before they go on the magic carpet ride, where Aladdin holds up a map. Genie’s on the map as a drawn animation. That was Michael getting a chance to do some real animation that would be in the movie. In fact, the look of Genie in that sequence was essentially the look of Genie that we had for for all the 2D previs and postvis that we did for him.”

Reflecting on this use of traditional animation within a heavy CG/3D VFX-heavy film (which, of course, is a re-imagining of a 2D animated movie), Jarrett says “it was really, really brilliant.” The visual effects supervisor, intimately familiar with the usual previs and postvis process, admits he was initially surprised how well the 2D animatics fit into the edit and how well they played during review screenings.

“You just forgave it so much,” Jarrett notes. “It didn’t matter that it didn’t look realistic. It just conveyed all the character. It’s a really, really, really enjoyable process, actually, certainly one I’d do again.”