And then episode 4 has…the dolphin.

To get a sense of both the original storytelling and the hugely impactful visual effects in Amazon’s The Boys, you do not need to look much further than the pilot episode of the series. It’s here we are introduced to (what turned out to be) mostly corrupt superheroes, and where we also learn that pretty much nothing is off the table in terms of over-the-top effects (including, a whole lot of blood).

The Seth Rogen and Eric Kripke-produced show, which is based on the Garth Ennis and Darick Robertson comic-book series, does things differently, and that makes for a wild VFX ride. Shepherding the effects effort was visual effects supervisor Stephan Fleet, who oversaw a bevy of studios on the show.

In that first episode, we get a major superhero truck stopping scene, a bloody speed-induced human wipe-out, an invisible man fight and the laser-eye destruction of an airplane. For befores & afters, Fleet breaks down how each of those VFX scenes was achieved, and then, for good measure, also details what could arguably be the most memorable dolphin moment in small-screen history, which happens in episode 4.

How to stop a truck

The show opens with an armoured van robbery foiled by Homelander (Antony Starr) and Queen Maeve (Dominique McElligott), the latter superhero literally stopping the van dead in its tracks with her body. The spectacular, insane shots in this scene show the van crashing against Queen Maeve, who also goes ‘through’ the entirety of the vehicle.

Working with special effects coordinator Tony Kenny, Fleet ensured that the bulk of the crash would be a practical effect. First, The Third Floor generated previs of the scene. Following that previs, a truck carcass was pulled on wires into a giant metal pole as the first plate. Then, a greenscreen element of McElligott miming jumping in front of the truck was filmed. Framestore combined the two plates, using a digi-double of the actress to help with integration, while also adding in some additional debris.

For the interior scenes of Queen Maeve ‘inside’ the truck as pieces fly everywhere, a purpose-built set was constructed. “This was super-cool,” says Fleet. “It actually moved around our actress – the entire set was on wheels and she stood there and we pushed her into the back of the truck by just moving the entire set. Then visual effects added all the floating stuff and we just hit her with a fan while she was moving back.”

Episode 1 contains the defining moment of the series when Hugh Campbell’s (Jack Quaid) girlfriend Robin (Jess Salgueiro) is killed in dramatic exploding-human fashion by a speeding A-Train (Jessie T. Usher). The crazy moment occurs in hard-to-watch slow motion; ‘Hughie’ and Robin stand on the side of a road when suddenly a wash of blood (and some guts) splash on Hughie’s face, followed by the realization that he has been left just holding Robin’s torn-off hands.

For Fleet and his visual effects team, the shot was one of the most challenging in the series. “It took us the better part of eight months to nail down the look and tone and storytelling of that shot,” he says. “It was just an incredibly challenging piece and big, big props to DNEG for pulling that off.”

Fleet credits episode director Dan Trachtenberg and DOP Jeff Cutter with coming up with a way to stage the shot so that it was not initially obvious what has occurred, and then is only further highlighted in an extreme way as Hughie is left holding Robin’s arms (something that mirrored a frame from the comic book).

The scene was filmed with a Phantom camera at around 500 frames per second. In order to move the camera as fast as it needed to go to get the shot, the crew used a Bolt High-Speed Cinebot rig, essentially a giant robotic arm on which the camera could be positioned. “What you’re seeing there when it’s rounding around Hughie is one second of time being slowed down,” explains Fleet.

A few practical blood passes to splatter Hughie with were attempted but never quite lined up. So DNEG tackled that facial blood, and the wave of blood generated from A-Train’s path, in CG. Around 11 plates were stitched together to form the final shot, along with the blood simulation. Showing the right amount of blood was something the visual effects studio had to iterate on for some time.

“It became about the storytelling,” notes Fleet. “How much of Robin do we see, how much of her guts do we see? How much blood do we see? What’s the trajectory? There’s probably more blood than a real human would have, but it would be a lot less interesting if it was a real situation. A-Train would pretty much atomize the person and there wouldn’t even be as many guts and spines and stuff as you see there.”

“At one point,” adds Fleet, “we were even experimenting with seeing Robin’s face in it and having her face crumble to bits. But it can become borderline comical in the wrong kind of way and it would also be too telling, and at some point it dawned on us that really the startling part of the scene is the tilt-down to the hand.”

Robin’s death eventually brings Hughie together with Billy Butcher (Karl Urban), the leader of the Boys, a group determined to out corrupt superheroes. Butcher shows off his skills early by saving Hughie from Translucent (Alex Hassell), a hero who can turn himself invisible. In an electronics store fight, Butcher takes on Translucent – who remains partly invisible apart from blood stains – in hand-to-hand combat.

Filming an ‘invisible man’ fight scene was no easy task, and would require significant planning from the effects teams. First, Translucent in invisible form messes around with Hughie, pushing him against a window. This was filmed with a stunt double in a gray tracking suit who was then erased in post by Mr. X. “We also did some patching on Hughie and some crinkling of the cloth around his back to make it look more real,” says Fleet.

Translucent picks up a TV (a CG element) to smash Hughie with, but then suddenly Butcher crashes his car into the store. In an overhead shot, Translucent is pushed through several shelves. Outlines Fleet: “We built an entire duplicate set of the store and it was rigged by our stunt coordinator Tig Fong and special effects team with a special rail system and a camera that was matched to a green bowling ball-type thing on wires that smashed the real shelves. It was motion controlled and it was able to repeat the move. We did a couple passes of smashing through shelves and we did the pass with the car crashing through the front all on a stage.”

For the Butcher vs. Translucent fight, the script initially called for Hughie to trigger the sprinklers, with Translucent then ‘illuminated’ by the resulting water. “I was literally like, ‘Oh shit,’” admits Fleet. “Doing visual effects through rain was going to be hard. But then they came up with the blood idea which is that Butcher spits blood on him to be able to see him.”

The fight was choreographed with a stunt double who wore a gray suit opposite Karl Urban. The actor then had to memorize the entire fight, and repeated it against nobody for a second set of plates. “We would do one reference take with the guy in the gray suit and then we’d pull them and then we’d shoot the same shot a couple of times without him,” says Fleet. “There’s only about two shots in there where we ended up using takes with the guy in the gray suit and having to erase him.”

“Then,” continues Fleet, “Mr. X used the guy in the gray suit as an animation reference to track a digi-double of the Translucent character and simulate blood on him and add effects of him turning on and off. We kept dialing it in with extra blood drips to make it legible enough.”

Hughie manages to subdue Translucent with a live electrical cable. A scene in episode 2 shows the now-stunned superhero being dumped into the back of a car. Fleet wanted that shot, which kept Translucent invisible, to have the weight of a real human. “I worked with our special effects team and we created this crazy rig out of wires and weights and metal things that are the size of ankles and arms for Karl and Jack to lift, which we could then paint out.”

Towards the end of the first episode, a seemingly innocuous plane journey comes to a fiery end when a flying Homelander shoots down the aircraft with his laser eyes (in retaliation for overhearing a passenger’s blackmail attempt on the superhero contracting company Vought).

Footage of Homelander was achieved via a greenscreen shoot with the actor hung on wires. DNEG composited the final shot, which also included the plane being torn into pieces from the eye lasers. The effects for the eyes would prove to be a significant part of the show, and it was on the plane scene that the VFX crew refined the right kind of anamorphic lens flare for the eyes.

“There’s also a lot of subtlety and a lot of breakup in those lasers that make them slightly unique from your average CG laser eye gag and they play into his character,” suggests Fleet. “I think that the timing and the tempo and the rhythm of when we fade them up and down, we use his performance to really gauge that.”

“The final shot is really Dan Trachtenberg’s vision in doing a slow wrap-around reveal of Homelander’s character,” notes Fleet. “So, you get the plane ripping in half, which is awesome, it’s probably the biggest spectacle thing we have in that episode and then we meander the camera over to Homelander and see that little bit of a smile on his face and you realize, ‘Oh this guy’s a sociopath.’”

Things get weird(er): the dolphin

While those spectacular four scenes all happen in The Boys’ pilot, the first season’s other seven episodes also contain some out-there visual effects work. There’s the laser eyes of a baby Butcher uses to mow down adversaries. There’s Starlight’s (Erin Moriarty) light-emitting powers. And then there’s…the dolphin.

Audiences meet the mammal in episode 4 when The Deep (Chace Crawford) attempts to rescue the dolphin from captivity. The superhero, who can communicate with aquatic life, places the dolphin in a seemingly safe position in a van, but a sudden need to brake causes the animal to be flung in slow-mo through the windshield and onto the road – and into the path of an oncoming truck – while a tune from the Spice Girls plays.

Scenes of The Deep conversing with the dolphin in the van made use of a dolphin puppet. “And then, they built this green dolphin stuffie and then they literally built like a dolphin rocket launcher,” describes Fleet. “The plan was that we would shoot it on a street in Toronto and the green dolphin would go through the glass windshield to provide real interactive breaking glass.”

Soho VFX replaced the green dolphin with a CG version, paying close attention to facial expressions and subtle movements. “They also came up with the idea of him flopping on the ground before the truck hits him,” says Fleet. “Those little details make it great.”

“It was kind of one of those funny nights in visual effects, you know, you’re working until five in the morning launching green dolphins out of a car.” 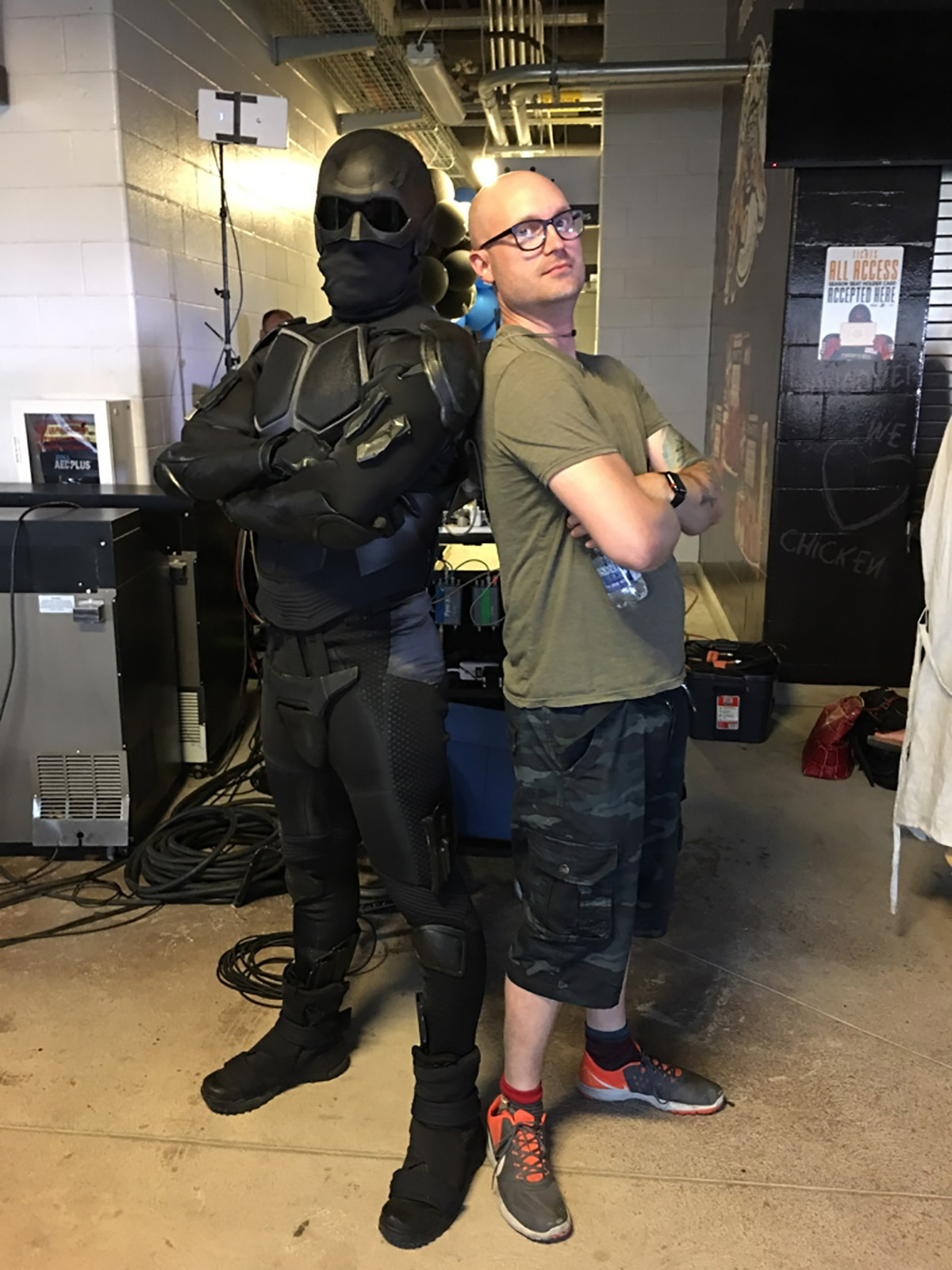