There’s a lot of great invisible effects work in HBO’s Chernobyl, but one scene that I was astonished by, in particular, involved the ‘rooftop liquidators’, people sent up to clear radioactive debris from the Russian nuclear power plant’s rooftop in short bursts (it was bad news if they stayed any longer than 90 seconds each).

The scene plays out in a 3000 frame Steadicam camera move and includes a particularly precarious moment where one liquidator gets his foot stuck. To film the scene, actors performed on a bluescreen set-up, and DNEG meticulously composited in the rooftop views.

Here, DNEG visual effects supervisor Max Dennison breaks down the work, and you can also check out before and after sliders of the bluescreen shoot and final shots. 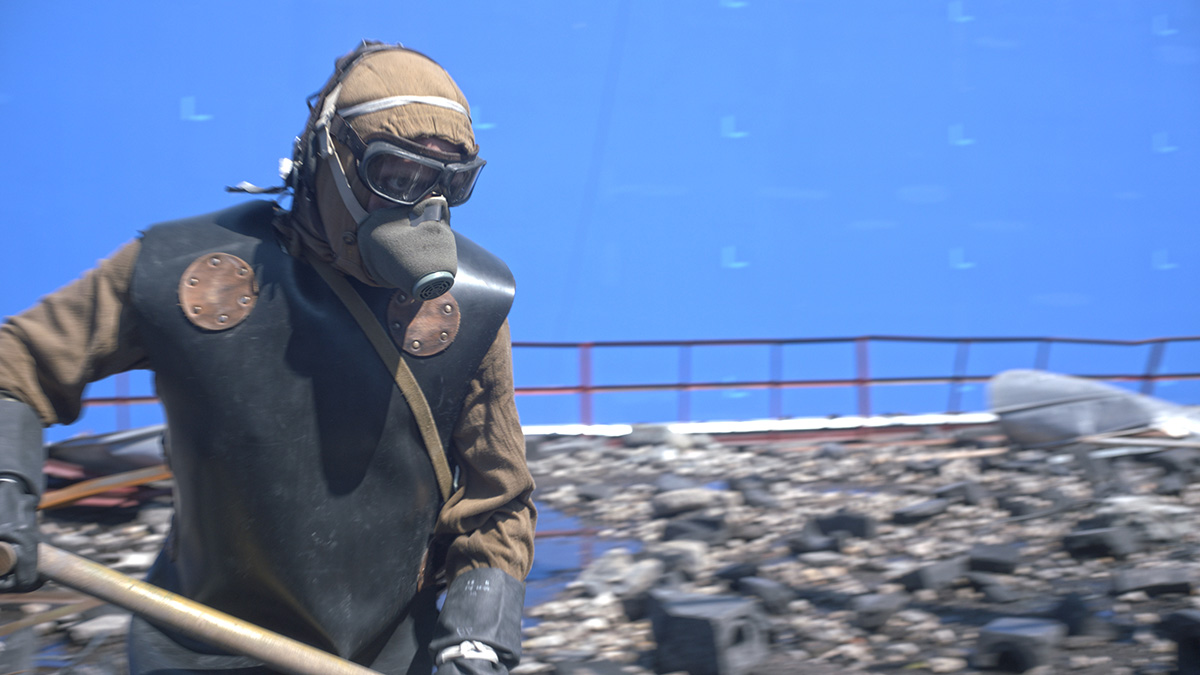 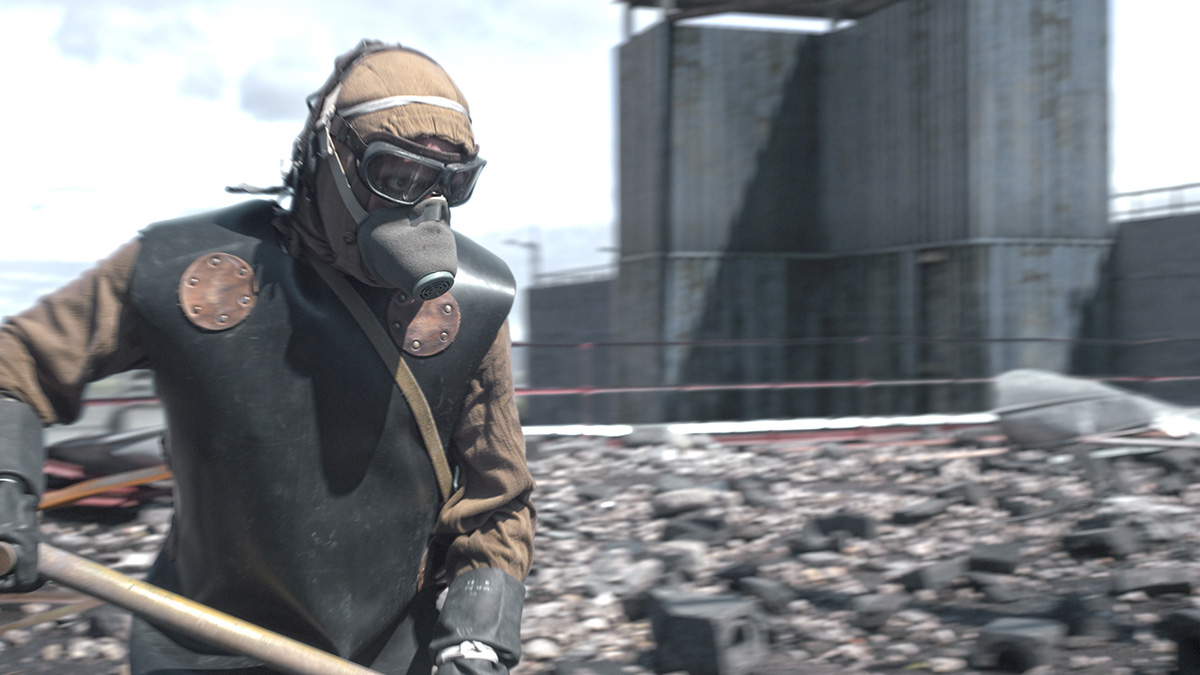 b&a: For that rooftop liquidators scene, what was your brief from the show’s makers for those shots in particular?

Max Dennison: This particularly harrowing shot is based upon actual stock footage of the event filmed on MASHA rooftop in 1986. During this period, over 4000 ‘liquidators’ were sent up onto the roof in small groups to clear it by hand in 90-second increments.

Writer Craig Mazin and director Johan Renck both wanted to portray this exactly as it was back in 1986 and so they contrived to film the scene in exactly 90 seconds to demonstrate just how intense and dangerous it was. As with the rest of the show, they felt that it was vital for the viewer to have the same involvement as the characters on screen and so we filmed the entire shot on a steady-cam to give us the same intimate experience of being on the roof. Combined with the ever-increasing crackle of the dosimeters, the viewer was cleverly placed into the heart of the action.

Our brief was simple: to create the expansive Chernobyl environment beyond the rooftop, to show the open core of Reactor #4, chimney, and rest of the plant.

b&a: How was it decided how that scene would be filmed (ie. what things drove decisions about the shooting location, how much set to dress, the approach to a bluescreen environment, etc)?

Max Dennison: It was decided early on that production would build one rooftop set which would ultimately serve for both MASHA and KATYA roofs. Production Designer Luke Hull designed and built the set, taking his stylistic reference from the many historical photographs of the actual roofs – particularly the contemporary footage of the Liquidators on MASHA. Beyond the set, we placed a large bluescreen covering three sides of the exposed set which would have to be replaced with the larger Chernobyl environment.

We LIDAR’d the entire set in order to get an exact virtual replica and as we also had a full virtual Chernobyl environment, we knew exactly where our virtual roof would sit. So fitting the environment around the set did not pose any significant problems. 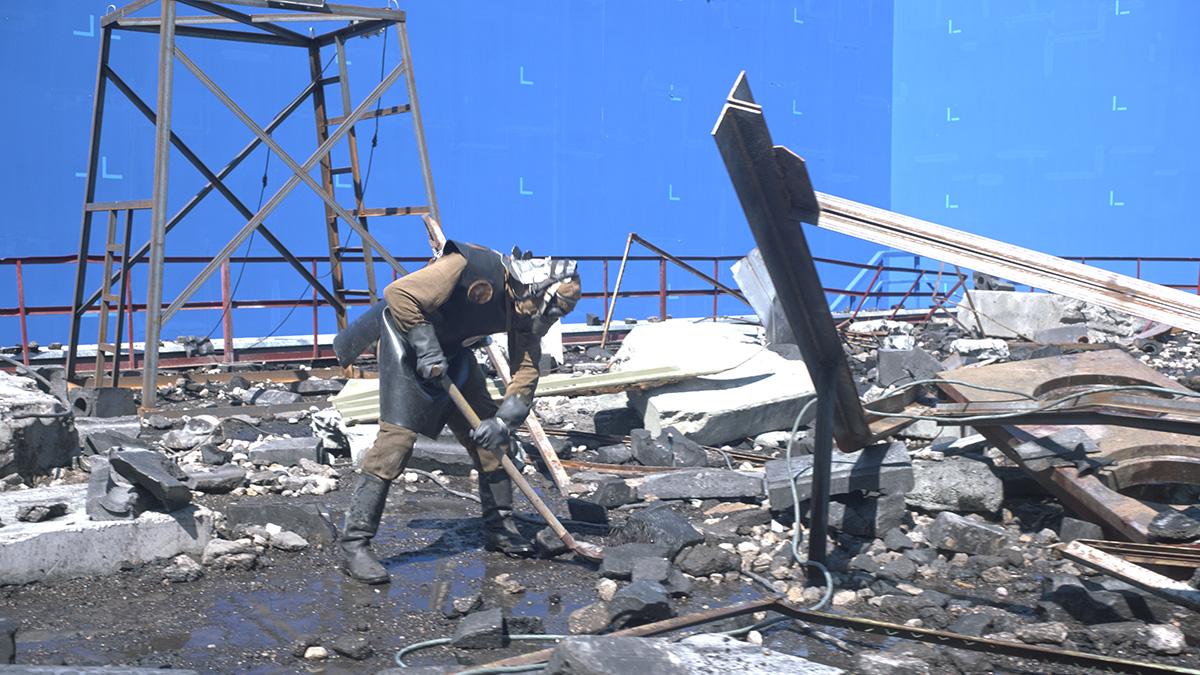 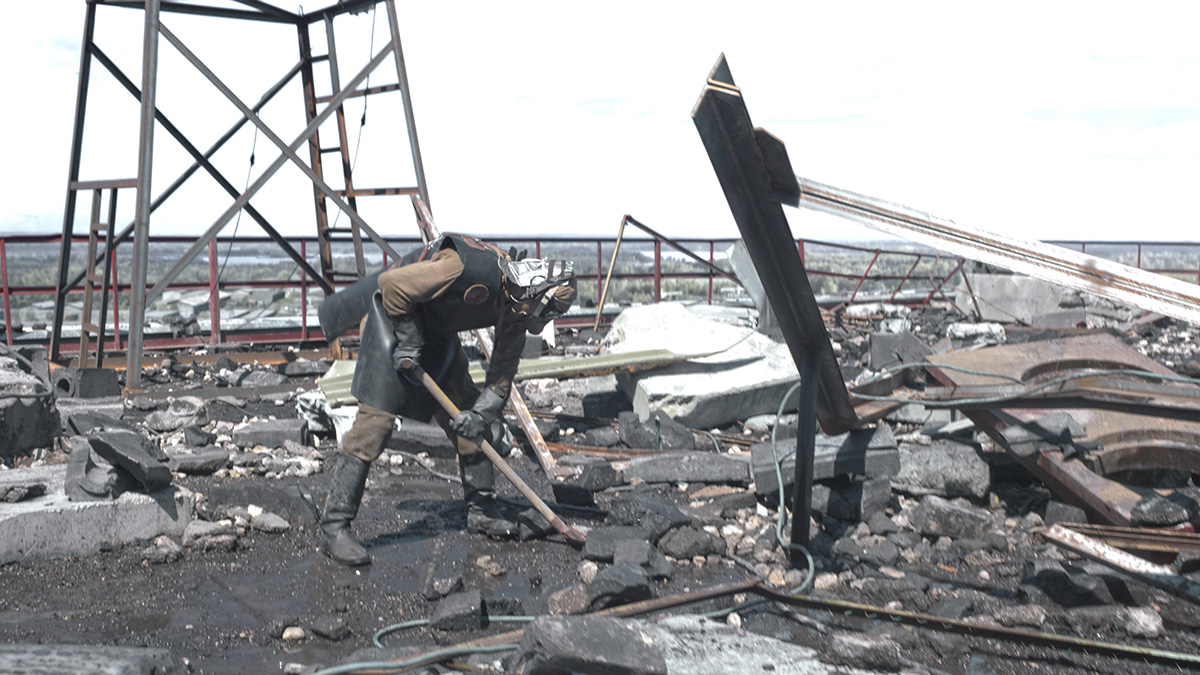 b&a: What were the particular challenges of the shoot? Did you have full bluescreen coverage?

Max Dennison: As mentioned above, we surrounded the set on three sides with a large wrap-around bluescreen. The fourth side backed onto an elevated walkway extending up to the main chimney rooftop. So any action taking place against that side would always be covered by live set. However, above this walkway it was necessary for us to place our CGI chimney to accommodate any excessive camera moves which went off-set.

The decision to go with bluescreen as opposed to greenscreen was based on a number of factors. Firstly, we would, for the most part, be shooting on this set in bright natural daylight and as such, the colour spill and bounce of the walls would need to be controlled in such a confined space. Blue generally offers less luminosity overall and so that meant that we could add additional light if required rather than having to dampen it if it became too much. 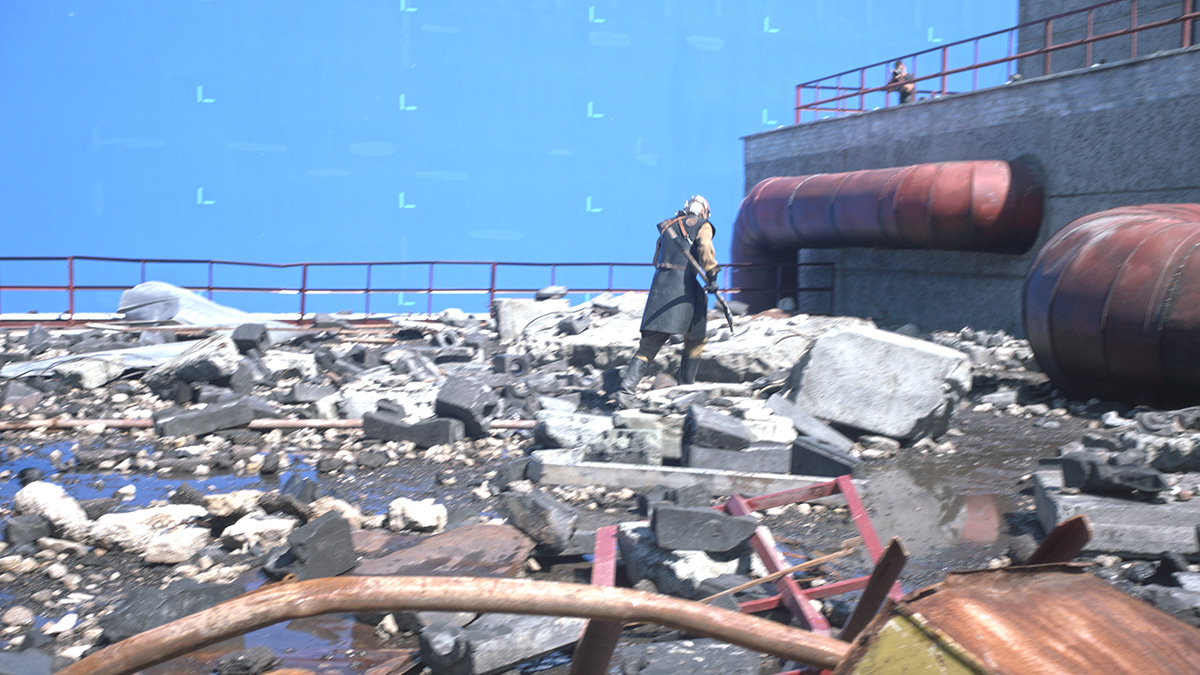 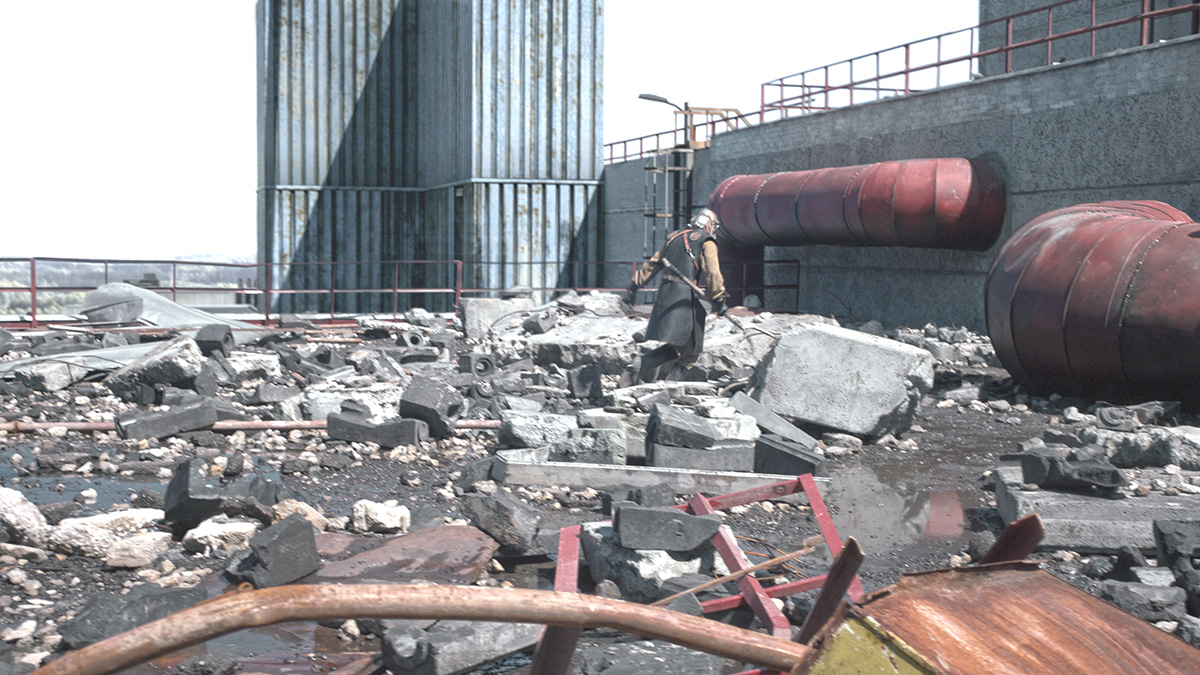 The second factor contributing to the decision was that the liquidator shot was to be filmed with a Steadicam and this meant highly erratic camera moves. With such a large amount of motion blur likely to occur, excessive color creep would make it very difficult to pull accurate keys. Again, the reduced luminosity of blue would limit the amount of creep into our highly motion-blurred edges which would ultimately help up later on in the post.

The final factor was that we needed to make sure our exposure and color temperature settings, both on-set and in [ost, would equate evenly. Given that the color temperature of live plates was going to be in the higher range i.e. in the blue spectrum, it would be more beneficial if we started with an overall blue cast to the environment right from the beginning.

b&a: What environment beyond the roof was then built? How did you approach this?

Max Dennison: Knowing that we would have an exact virtual replica of the rooftop set thanks to LIDAR, and an extensive CGI model of the Chernobyl environment including a highly detailed replica of the exposed Reactor #4, meant that once any live cameras had been tracked, we knew we would be able to place the shot accurately within our virtual Chernobyl set.

This facility would give Johan a huge amount of latitude to film the shot as he wished. It meant that there were no limits placed on where the camera could look – up into the sky, 360 along the horizon, or even down into the open reactor hall, and all in one take. 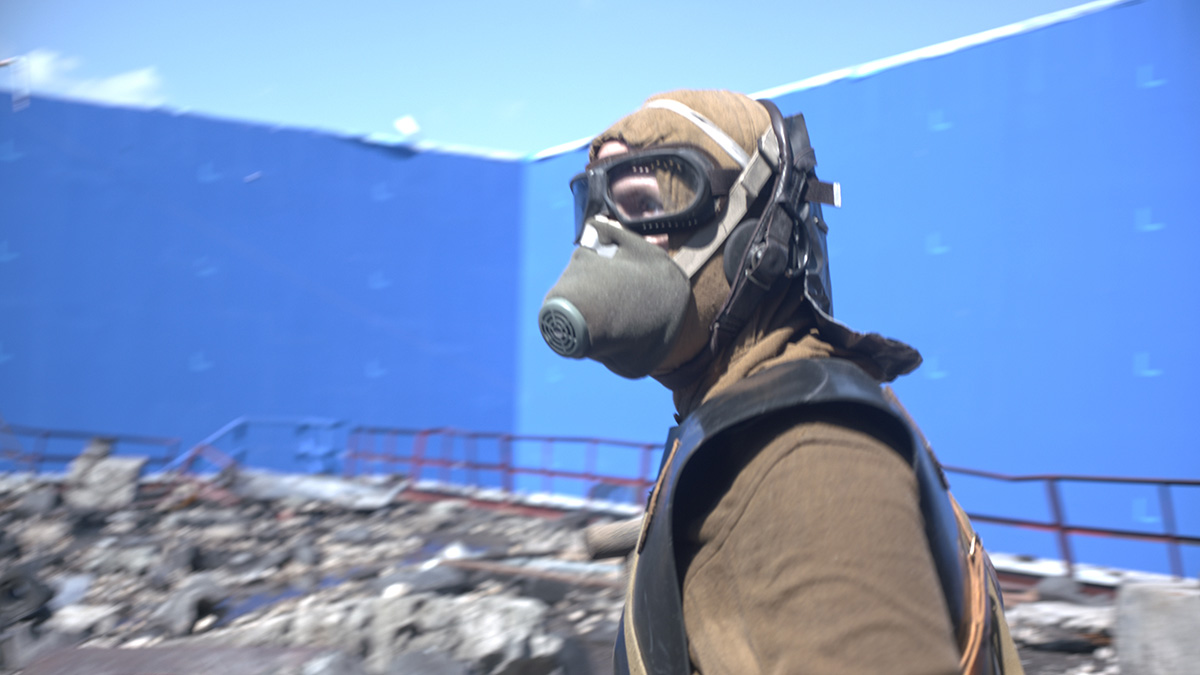 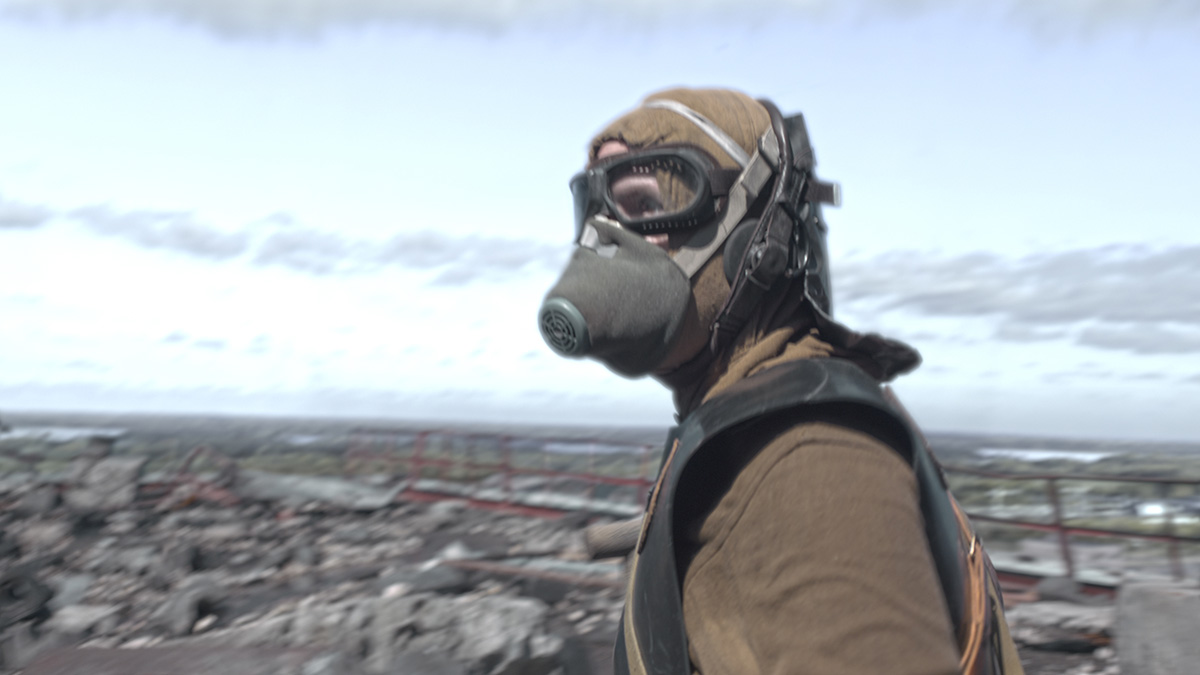 Given that there is historical footage of the liquidators on MASHA roof, this also helped us enormously in terms of accurately representing the environment in post as it existed during that period. For instance, there are certain mobile cranes which appear in the footage which don’t appear in the same place throughout the event. We also had to cheat slightly the position of the open reactor core for story telling purposes so that it appeared that the liquidators were dumping the broken graphite blocks directly into the core.

b&a: What were some of the very specific compositing challenges (dealing with the moving shaky camera, for bringing in the environment, for dealing with the suits and jaggedy pieces on the roof etc)? Was there any digital set dressing required?

Max Dennison: Once principal photography had finished, there were a very large number of challenges facing us in Post to complete this shot and to make it look plausible and seamless within the surrounding drama.

Firstly, we were dealing with over 3000 frames of 3K Steadicam footage and this raised a significant question across multiple departments. In other words, were we going to process this shot as one complete cut, or break it down into smaller sections which we knew our software would be happier with? Taking the latter approach, we broke the shot into seven manageable blocks, which in turn allowed each department: Tracking, Roto/Prep, Comp, and CG to all start work independently, thus giving us time to process each section within the limited time constraints. 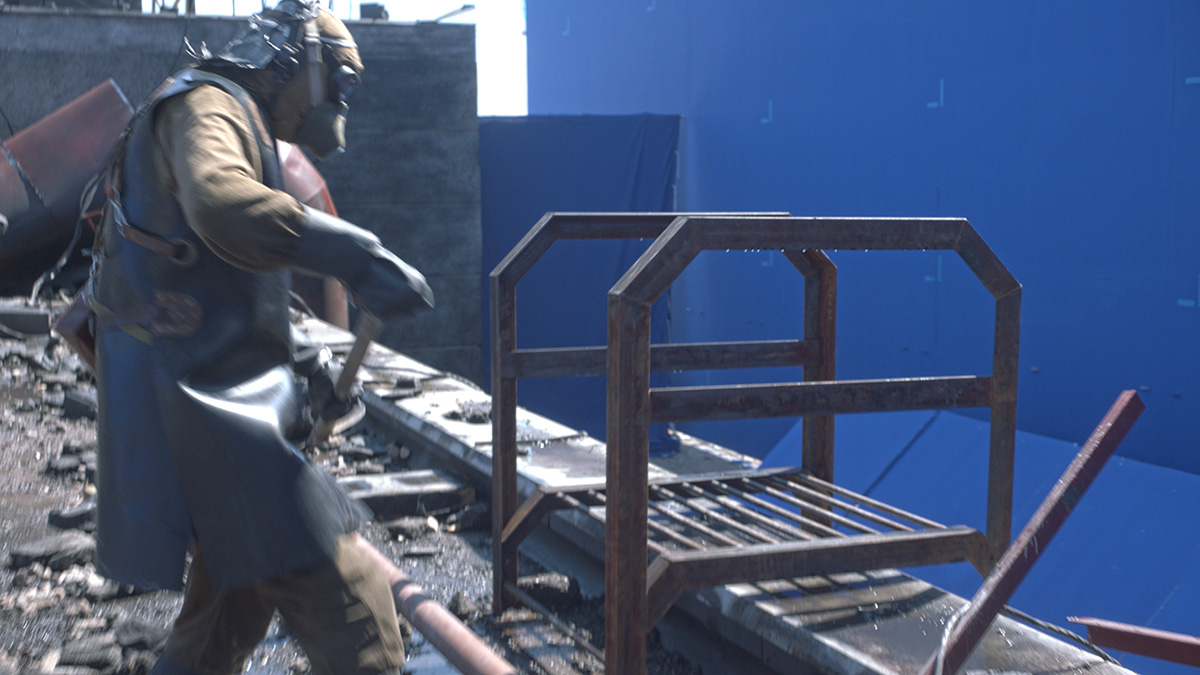 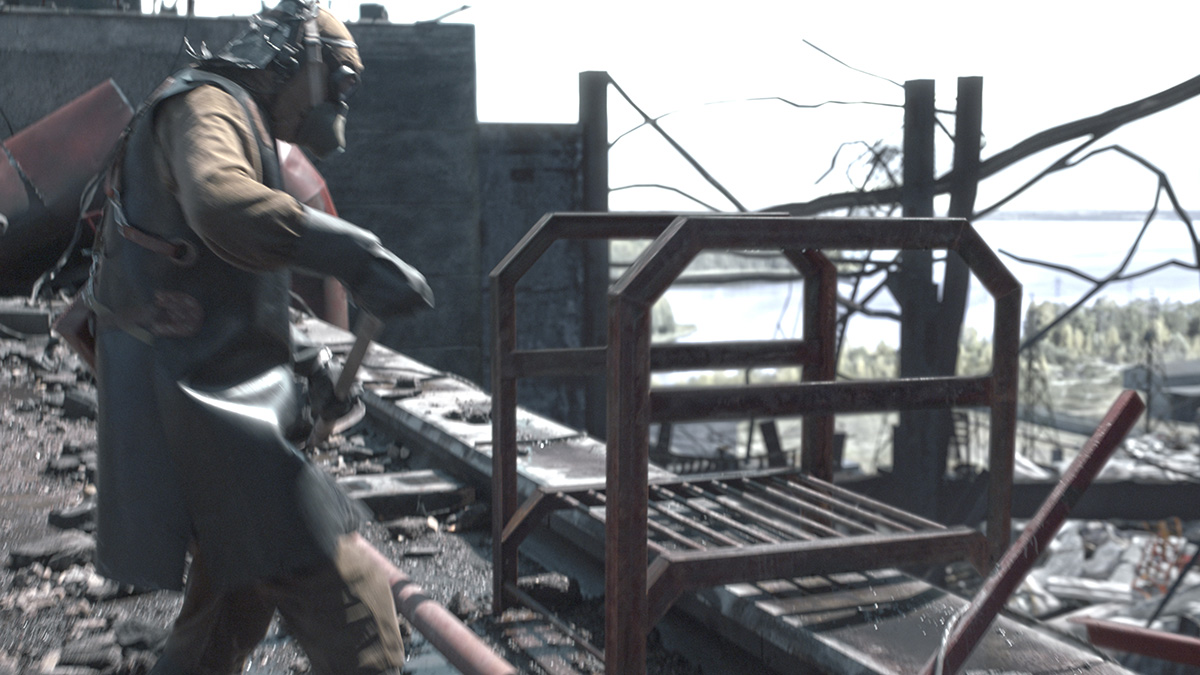 ‘Tracking’ proved to be the biggest hurdle as all the footage was handheld using a Steadicam. Using 3D Equalizer as our primary software package enabled us to take each section and deal with its complexities in isolation to the rest of the footage. Incorporating our LIDAR set data into the software, we were then able to get highly accurate tracks which were subsequently joined together giving us one homogenous track which would help enormously in other departments.

In addition to using standard Nuke compositing techniques to extract keys, we involved our roto/prep departments to provide extra help with edges and even to cover up the Steadicam operator’s paths in and amongst the debris on the ground.

Our final challenge was towards the end of the shot where our liquidator trips over a broken graphite block. Originally, the character was supposed to trip over a piece of generic rubble, but afterwards it was felt that it would intensify the scene if he were to trip over a broken piece of graphite. Therefore, we had to replace the original rock with a fully CG piece of broken graphite. 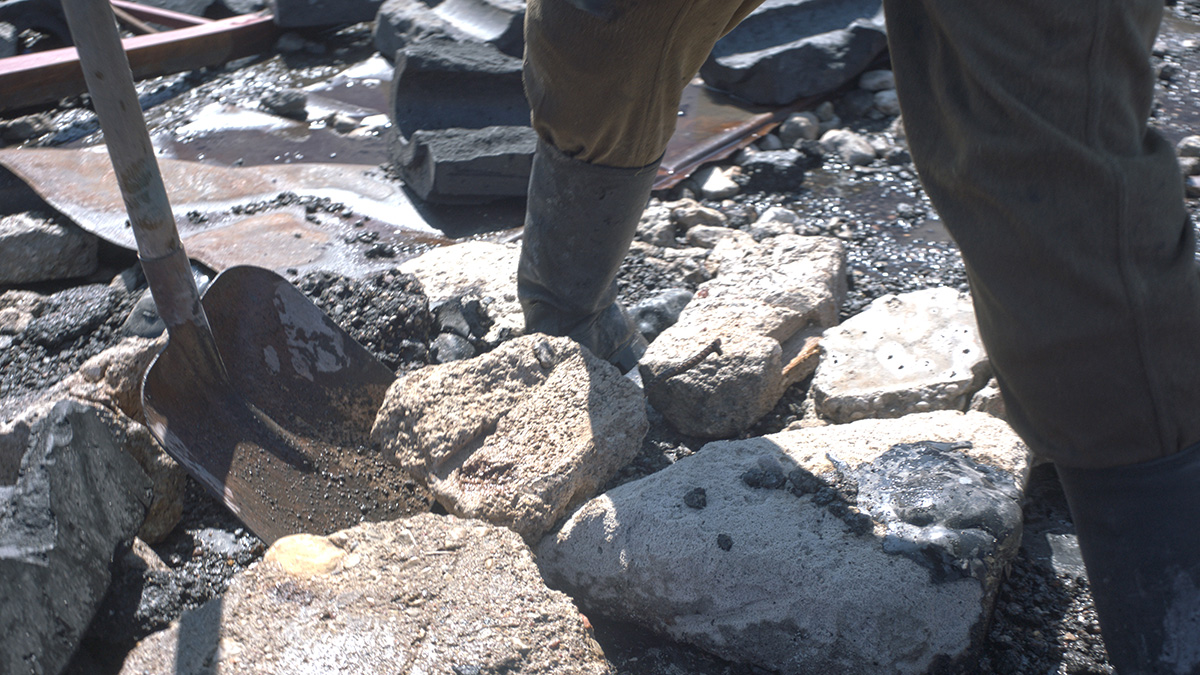 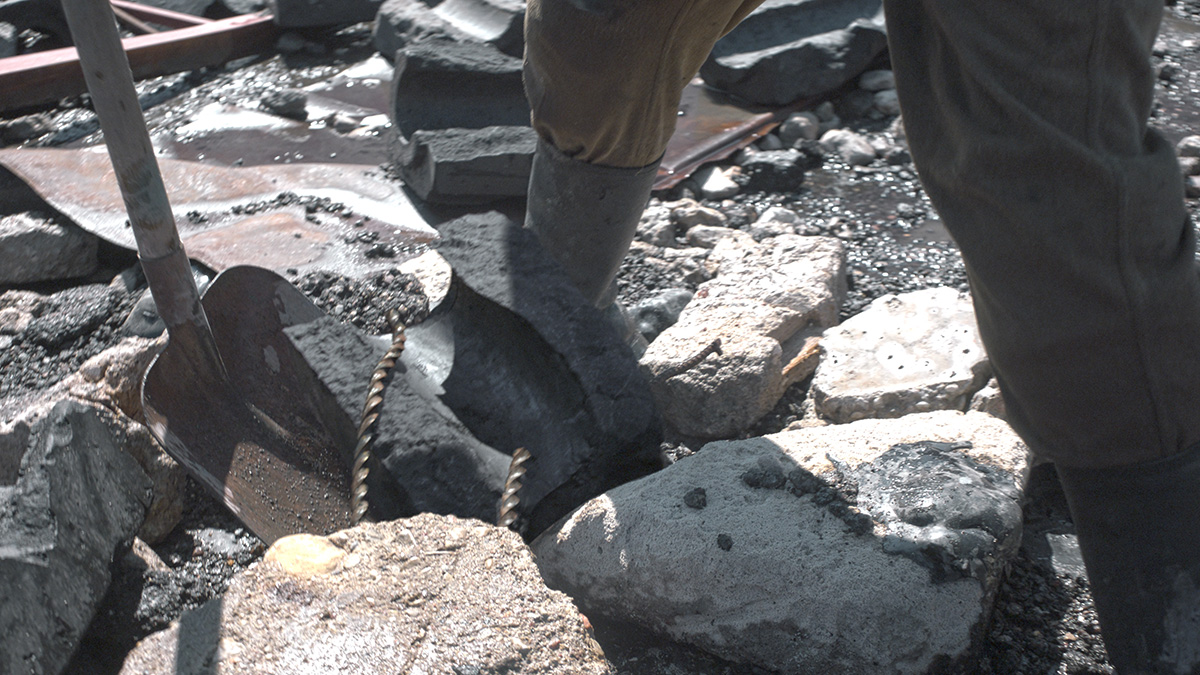