How Scanline conjured the water creature for ‘Spider-Man: Far From Home’.

Spider-Man: Far From Home has several signature sequences, and one of them is the appearance of ‘Hydroman’ in Venice. Here, the water creature is tackled by Mysterio and by Peter Parker (not in Spider-Man costume).

Well-known for its approach to fluid sims, Scanline VFX was tasked with bringing the scene to life. In this article – part of our in-depth coverage of the film – Visual effects supervisor Julius Lechner provides a visual journey through the Venice shots for befores & afters.

Just click on the images below for a slideshow look into this sequence. 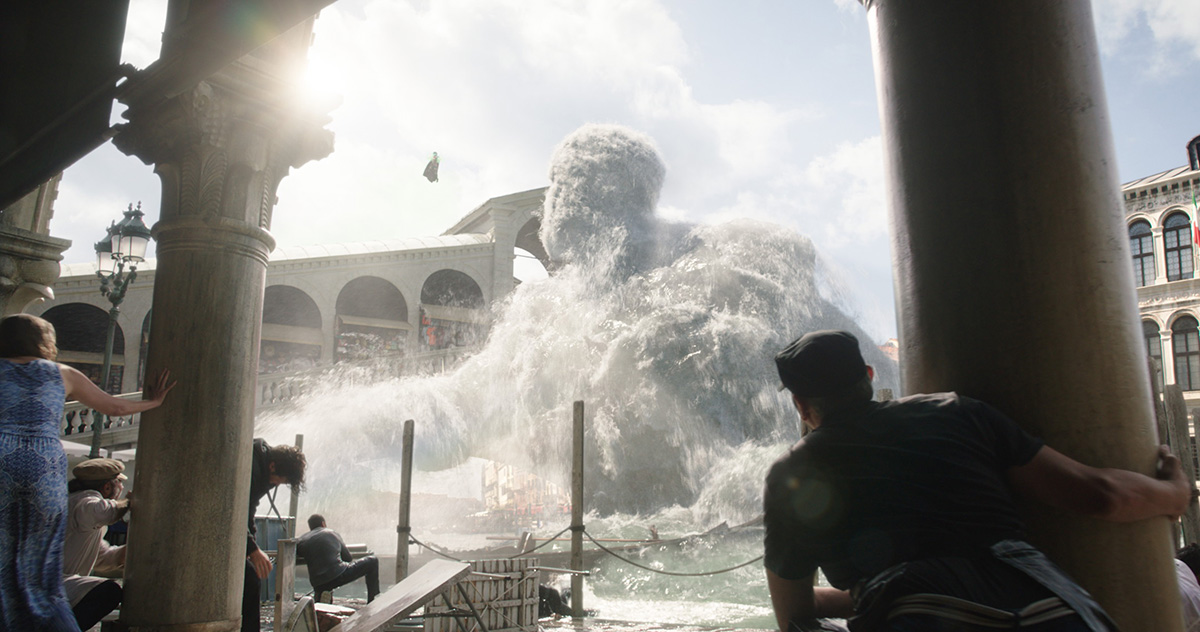 We received conceptual images early on in the project that gave us a general idea of what Hydroman should be. Taking this as a visual starting point we began developing the look and logic of the creature which evolved over time. Before the shoot we had previs that helped us greatly in planning the sequence. For the action in Venice the shoot was split in two: on location in Venice and in a water tank at the Warner Bros. Studios in Leavesden, UK. The set in the UK was built to perfectly fit into the real location, but replacing one of the buildings completely with the walkway, smaller buildings and pedestrian bridge that you see in the movie. Most of the material with the cast was shot there and we replaced the background with either CG environments or plates from Venice. 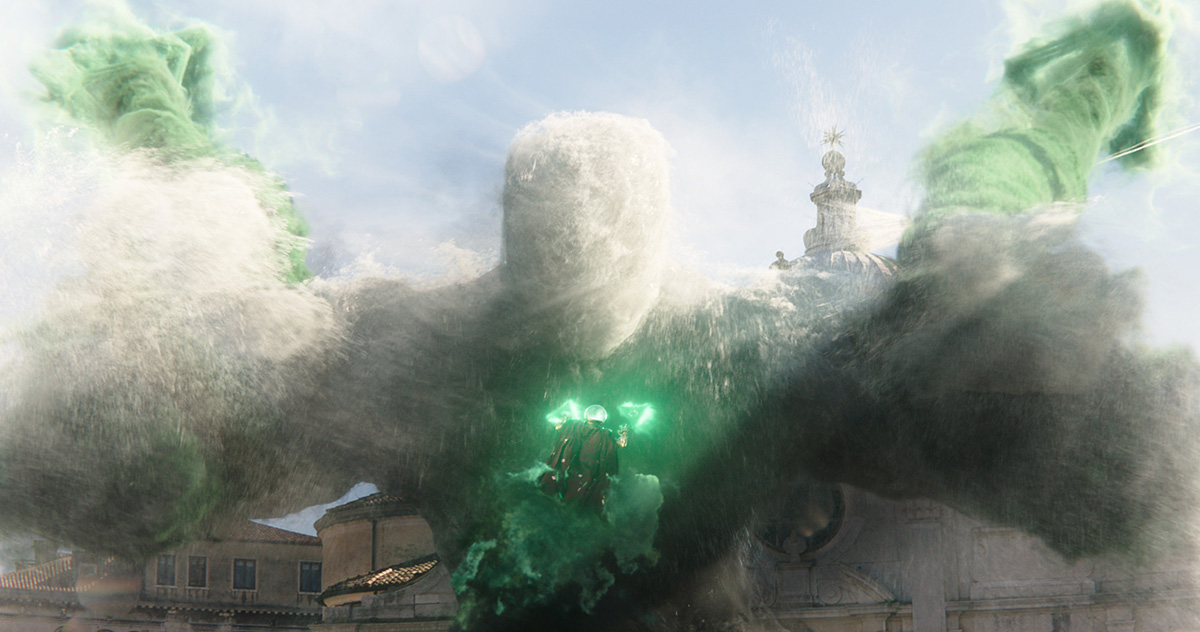 Our goal was to create something that feels chaotic but at the same time controlled and visually readable. The reference that we tried to follow was a churned up river for his body and massive water cannons, used to dampen the noise on rocket launches, for his spray and mist as well as for scale. If he would be too clean and contained, then it would not look exciting and dangerous but on the other hand if we would go more extreme into the other direction and made him messy with a lot of spray and mist in the air, it would have been hard to understand his actions. His general logic was that he himself really is the water and builds his form by attracting the surrounding fluid. The water then can flow back to the canal inside his body. When he moves it can detach, depending on his acceleration. All of this was very controllable and could be dialed per shot. 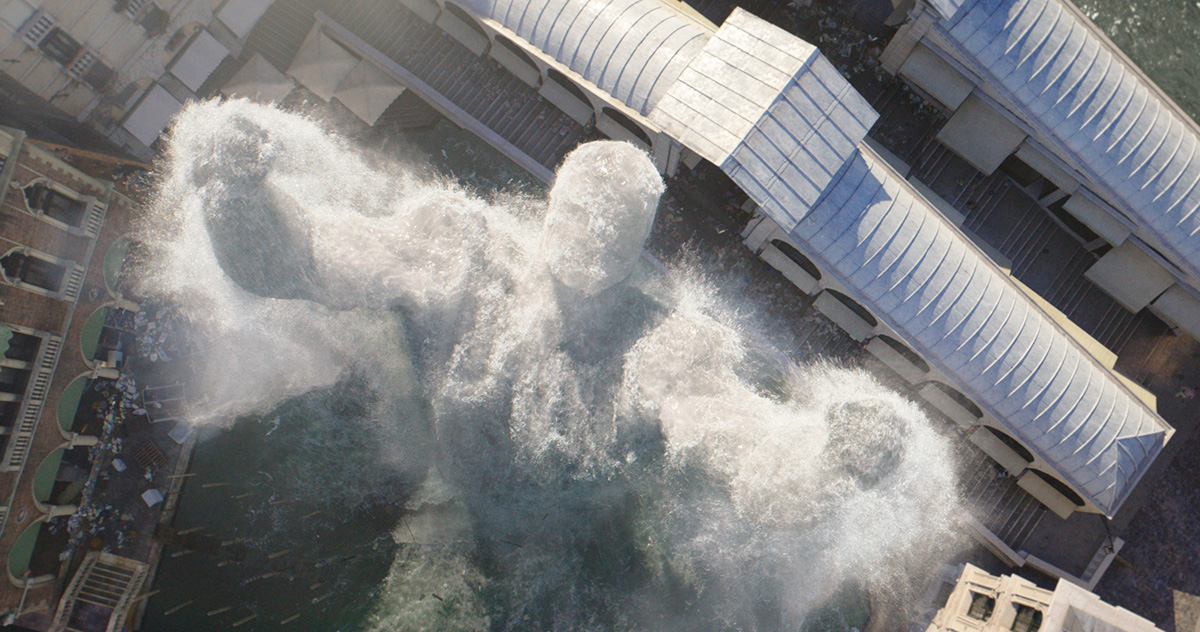 Since we were dealing with heavy simulations we had to make sure Hydroman’s setup was stable and reliable, so that we could be sure that any animation that we run through it will give us a good result out of the box. The main underlying technical issue was to have the water follow his body in a controlled manner and react correctly to his movement. The result needed to feel like the earlier described churned river, but with the shape of a person. We had to create a lot of new features and simulation logics for Flowline, our proprietary simulation software. The interaction with the existing canal water was solved on a case by case basis. Some shots required us to replace all the water in the canal, where others we had to blend between the digital and the real water. 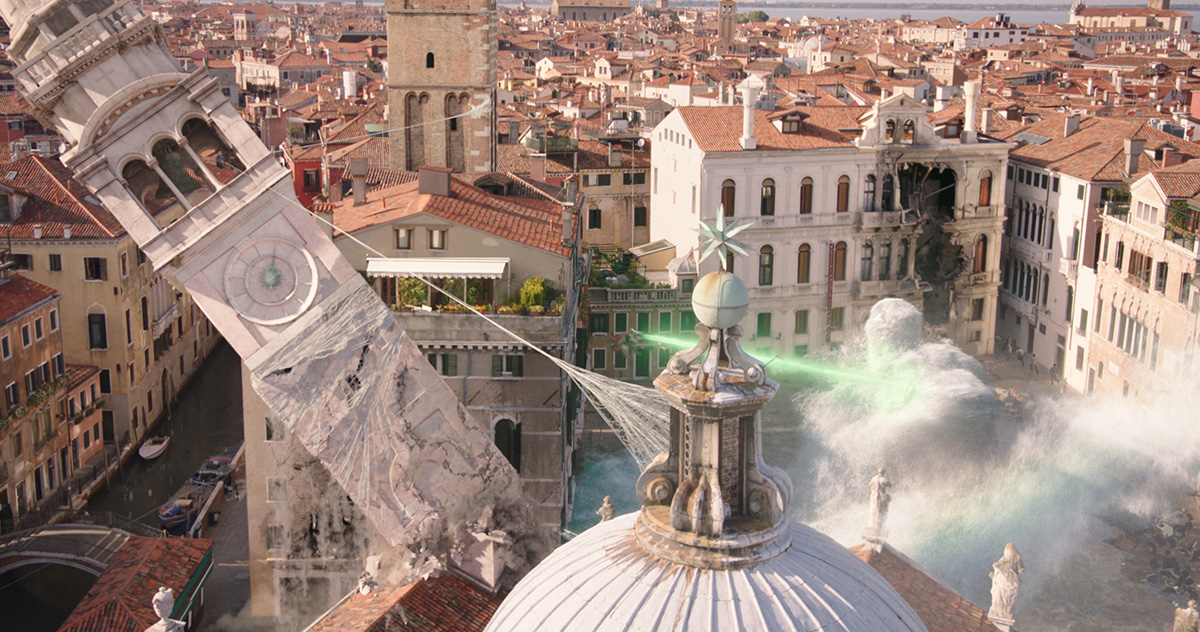 Since the set in Leavesden was based on a Lidar scan and built with incredible accuracy, we had a great starting point to build one coherent digital environment, merging the two locations together. For key assets like the Rialto bridge itself we knew early on about it having to be destroyed, but we wanted to be prepared to cause damage to the whole area around it. So each of the surrounding buildings was built destruction-friendly, with interior walls, bricks and furniture when needed. The destruction simulations themselves were handled in Thinking Particles, using a simplified representation of Hydroman for interactions. On top of those we simulated fine debris and dust with Flowline. 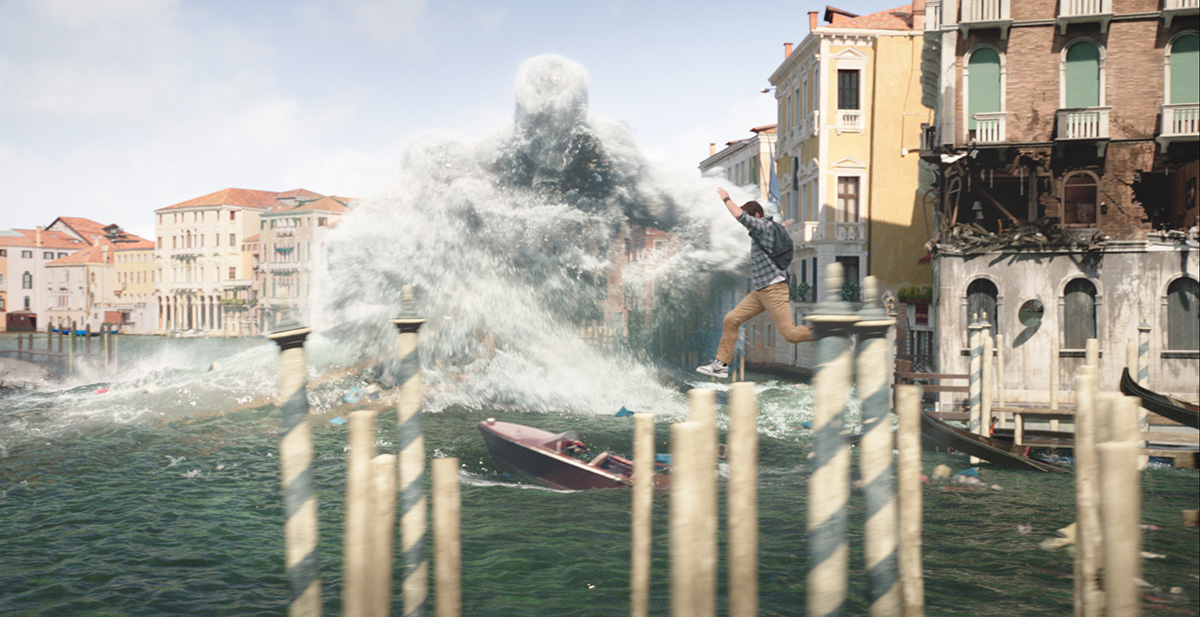 Tom Holland likes to perform many of his stunts himself and did so as well in this shot. It was shot on the set in Leavesden with Tom being secured by wires. Since it was quite overcast that day we ended up replacing most of the original plate with either digital or projected environments. We also, in addition to Hydroman, replaced all the water in the shot and added digital boats and debris in the water. 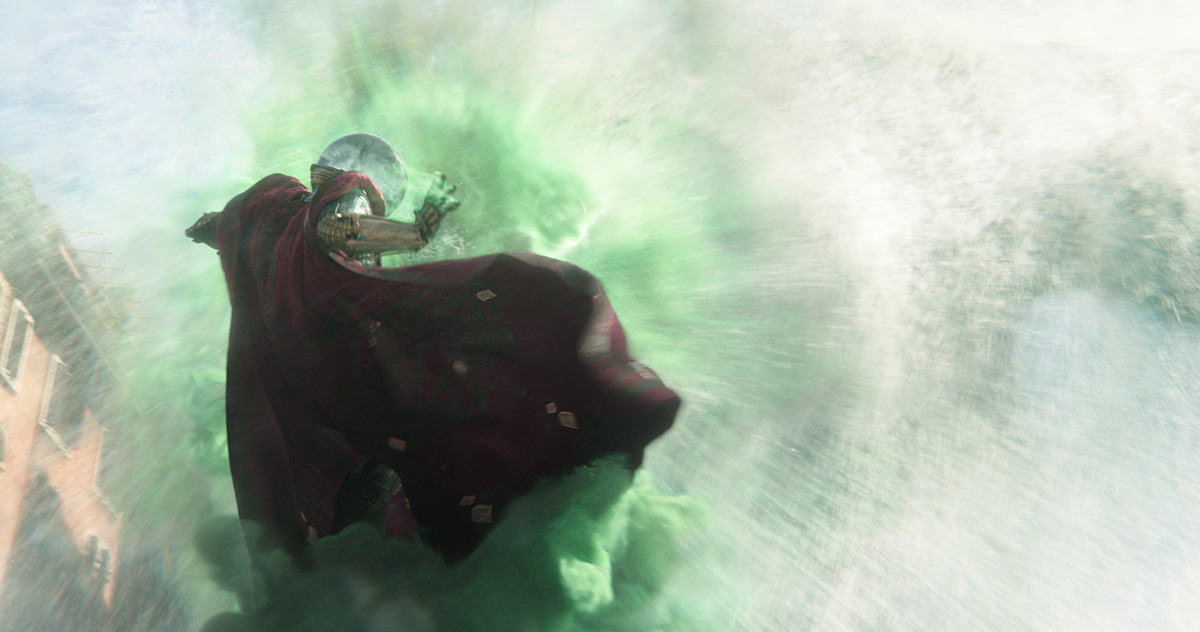 Each of these shots is like a big puzzle that comes together bit by bit, especially early on in the project when some of these were used to develop the look of Mysterio and his powers. We started with the main elements like Hydroman and Mysterio’s green smoke as a base and continued refining and adding new ideas. In order to have all these pieces work together it was crucial to define their basic timing and position already at the animation stage. Mysterio’s green shield or his green blasters for example were driven by animation so that the different downstream departments could all work with the same source data. We also had to define which of all these different simulations actually have to interact with each other, either in terms of lighting or affecting each other’s motion, since this increases the complexity of the workflow. As always it is also crucial to be able to rely on the simulation setups to be predictable in their behavior, so that creative notes can be addressed efficiently.

+ There are no comments

Getting your head around rendering in the cloud