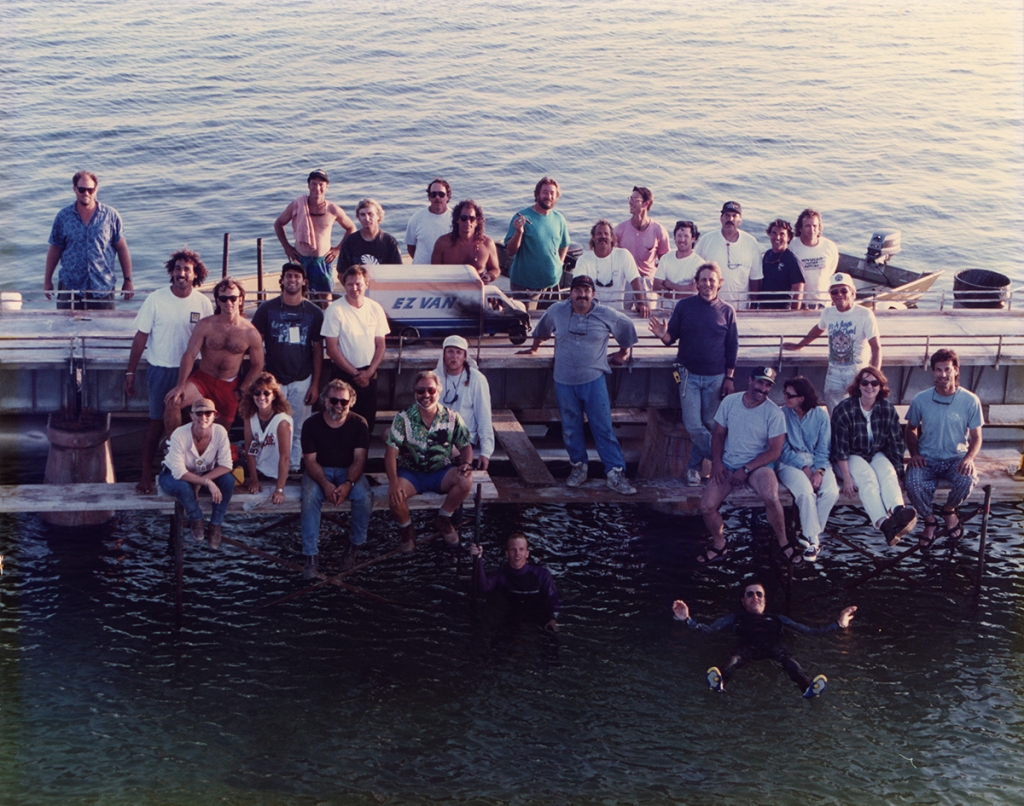 Behind the scenes of that Florida causeway scene in the James Cameron spy adventure.

James Cameron’s True Lies was released 25 years ago, and it was a huge film in terms of visual effects. Two sequences stood out. There’s the end Harrier sequence that made use of full-sized jet mock up on a motion base shot both on top of an actual building and in a green screen environment, along with miniatures and CG and compositing work.

Then there was the Florida causeway, which would be blown up as a result of being hit by missiles, resulting in the spectacular crash of a van being driven by some of the film’s baddies. The scene came together as a mix of live action, miniatures, pyro, and CG missiles and trails. Although Digital Domain was the lead vendor on True Lies, the causeway miniature work was outsourced to Mark Stetson’s Stetson Visual Services, Inc.

At Trojan Horse Was a Unicorn last year, Leslie Ekker, who served as mechanical effects chief for Stetson Visual Services on the causeway sequence, shared with me how the miniature build and explosion came together, plus how another shot requested by Cameron was set up, but then ultimately cut from the film.

Leslie Ekker: The miniature, obviously, had to match the full size results of that catastrophe that they’d already shot in Florida. So it was a chaotic event that had to be a predictable and controlled outcome. Very tricky. So Pat McClung [who the miniature supervisor at Digital Domain] knew this was a highly complex project. In the meantime, I had become one of these people they would bring in when nobody else could kind of figure out how to do it, which was awesome. I love that. And so Pat said to Mark Stetson, ‘If you hire Les to crew chief this project, I’ll give you the contract,’ and Mark was probably going to hire me anyway, so Mark said, ‘Sure.’

I actually co-crew chiefed in partnership with Richard Stutsman, the really gifted, very smart, very technical, physical effects guy. Richard handled the structure inside this bridge model that had to be frangible. It had to disappear on cue so it could collapse. And then also, the machine to launch the truck up to 70 miles an hour, a model truck about one metre long. Particular physical challenges like that.

Richard and I are a good team. We meshed perfectly, because I have a very mechanical engineering science oriented approach. I had to write an environmental impact report for the government, because we’d be shooting in some shallows that were newly declared turtle grass refuge for manatees and turtles. I had to design seven boats to support the work crew to transport the pieces from the dock out to the miniature, which is about a one and a half mile boat ride.

Making the miniature, and blowing it up

It was a big model. This was big. It was about a a hundred metres long and about a metre and a half wide and about three metres tall, by the end of it. A big model. The bridge had to be exploded convincingly. Now, when you build roadways like this, we usually use plaster. If you load too much pyro into that plaster, you’ve got a model in one frame, and the next frame, you have a puff of dust, and the next frame after that, it’s gone. So it has to be blown up in just the right way in almost a slow explosion, to see particles and to see chunks and the guardrail bending and flying and things falling and splashing in the water, not just vaporising.

The pyro technician assigned to this job was Joe Viskocil, Academy Award-winning for Independence Day. Brilliant guy. Blows the crap out of stuff. I had to sort of limit Joe, so I built in channels into these roadway castings with surgical tubing. They were only so big. You could only put so much pyrotechnics in there, and they had to be in exactly the right place, because when it blew up, we had to leave remaining the rebar and stubs of bridge that we’d built in durable material and eliminate the rest of it. So it had to be very precisely positioned and very precisely powered.

That’s just the beginning. These road slabs, each piece between the columns, was, I’d say, about two and a half metres long and about a metre wide. It was made out of plaster, with holes through it. Very fragile. So we’d cast these in a big sort of flat mould and rotate the mould to take it out onto a special platform I designed and built, welded. Steel platform with these pads, a series of kind of interlocking pads. So the mould would be dropped on, put on these pads.

Then we made a lifting claw, this big sort of machine that would come under it with patches, these square pads with foam padding that would mesh with the support shelf, basically. Lift it carefully, with no force, no strain. Set it on another rack that had a matching set of fingers, and stack up pieces on this rack, load it onto a truck, ship it to Florida, get it off the truck, put it on the boat, get it out to the bridge, load it onto these columns without breaking. And do it twice. We didn’t break a single slab, not one. I was very proud of that.

The result, and a new shot

Now, I predicted the behaviour of the truck for Jim, because he wanted the truck to blow up and land and fall off the bridge. And I’m kind of famous for this, I told Jim, ‘It’s not going to work. Can’t do that. It can’t do that. It won’t do that.’ If people have seen the film, they know what happened. Well, [it came] true, and it behaved exactly as I predicted. But it was okay in the end. And Jim was cool.

Jim Cameron loved the sequence so much when he saw the dailies that he brought Richard Stutsman and myself, the crew chiefs, back, and all the little bits and pieces we could scrape together, and we built sort of a little piece of it in the parking lot in Venice, in the parking lot of Digital Domain. He wanted to create a shot where the truck would come out of a cloud of explosion debris, land on the edge of the bridge, and teeter along like a skateboarder on the edge, fall off in front of camera and blow up.

So, cool idea, [but] really complicated. So we made a track and we spiked the truck into the deck and we got it to, hopefully, slide. We worked for three and a half weeks to get that shot to work. Finally, we realised that the rubber wheel of the truck was tripping it and it would tumble. So I just made a plywood wheel and sprayed it black, and got a silver pen and drew a wheel on it, a hub, and put it on there. It worked. It now slid and fell off in front of camera. The day we got the shot, Jim cut it from the film.

Share your memories of watching True Lies (or even working on it) in the comments below.