A preview of Cascadeur, and what they’ll be demo’ing at SIGGRAPH.

Do you need to make a CG character run, jump, swing and fight? These are all heavily physical actions, and a new tool called Cascadeur might help you get to the final performance in the most realistic way possible.

Cascadeur hails from games developer Nekki, the creator of Vector and Shadow Fight. The software is aimed at bringing physically correct animation to stunt-like actions, without the need for motion capture, although mocap can be plugged into the system.

To find out more, and to see what Cascadeur will be showing off at SIGGRAPH LA this year, I asked Nekki’s Tom Borovskis to break down how the tool works.

b&a: What did you set out to achieve with Cascadeur? What was the gap in the field of animation that you were looking to fill?

Tom Borovskis (director business development, Nekki): To answer this question, we need to go back a few years, when Nekki was an indie game developer and started two new projects. For our action games Vector and Shadow Fight we faced the problem of requiring several hundred credible, realistic animations of martial arts moves (Shadow Fight) and Parkour jumps (Vector) – but without a large budget.

First it seemed like we had to make a decision between using either handmade animation or the help of motion capture. Unfortunately, both variants have significant disadvantages: Handmade animation, although it can be very expressive, will never look realistic. Motion capture, on the other hand, has a lot of limitations, as it depends on the real world. You have to buy a lot of expensive equipment, recreate the action scene, find skilful stuntmen and so on.

And finally you are more or less limited by the physical abilities of a human body. So – what if your action scene requires lions or even some magical monsters? Or maybe you want your superhero to jump over a ten meter tall wall? Then some hacks come into play, e.g. ropes are used to lift the actor. But this destroys believability. 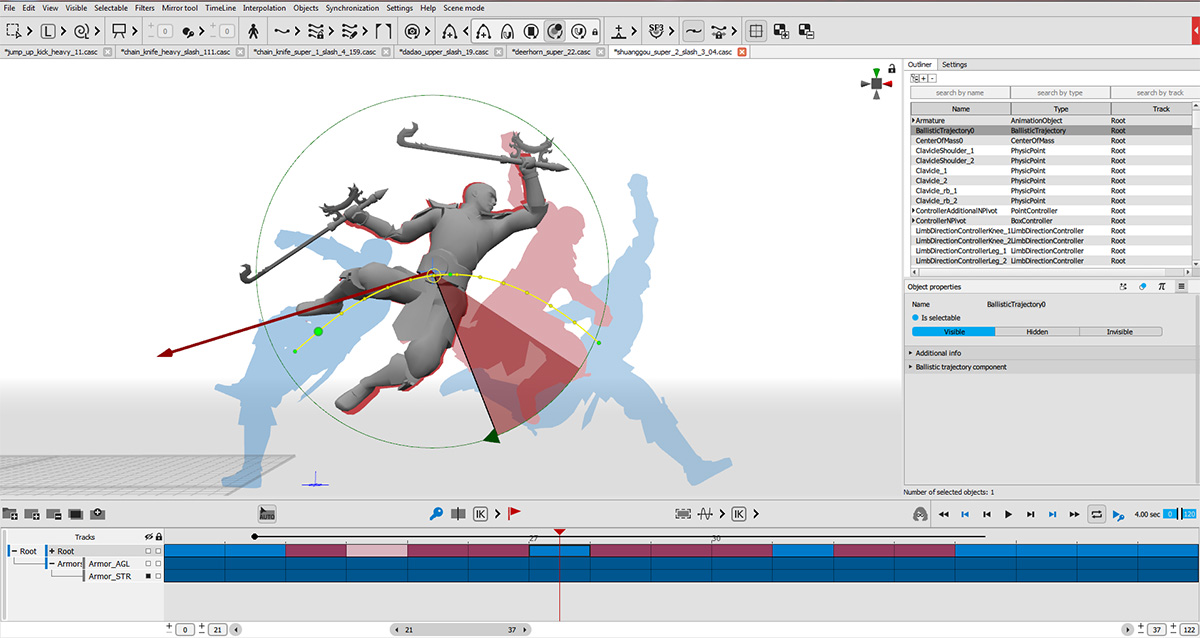 Our company founder and CTO Evgeny Dyabin didn’t want to accept the disadvantages of both alternatives. He and some colleagues developed a basic set of tools for the physically correct animation of characters without the use of motion capture, and applied it for the first time in Vector and Shadow Fight. Both games were very successful in their genre and both were praised especially for their very realistic, lifelike animations. During a period of nearly 10 years, these tools grew to the animation software Cascadeur. And since Cascadeur has been such a great help to our own animation team, we recently decided to package it, make it user-friendly and easy to navigate and share it with our fellow animators.

Cascadeur’s main goal is to provide animators with convenient and user-friendly tools, that will allow them to create realistic and believable action animation from scratch and then to fix the physical characteristics of the animation with the help of our physics-tools. Talking about mocap, it’s also possible to load in mocap data, change it and then fix the correctness of the physical characteristics in Cascadeur.

Another problem in the field of 3D animation is that the entry threshold is very high. It’s considered much harder to start creating 3D animation, than 2D frame to frame animation. And it’s actually kind of strange, if you think about it: to make 3D animation you don’t need to have good drawing skills. All the rendering will be done for you. So why is it so difficult? Our opinion – it’s because the existing software is very demanding and advanced. And here, our tool-set and our rig, that include a lot of physics in it can come in handy, as they are much more user friendly. We plan to make them even more comfortable until the release of Cascadeur as a commercial product. 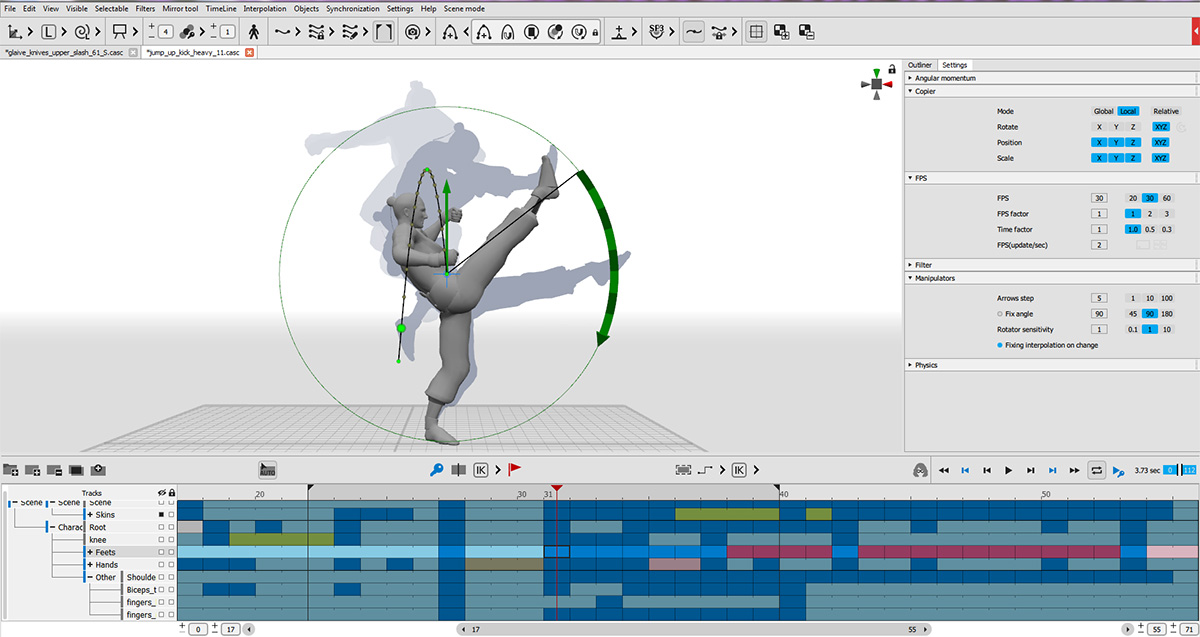 b&a: How does Cascadeur work? What are the main tenets of its physics-based animation approach?

Tom Borovskis: In Cascadeur, just as in any other animation software there is a rig, that the animator works with to create animation. But unlike most animation rigs, ours has a physical skeleton in it. This physical part of the rig contains the information about all the positions and rotations of the rigid bodies. Based on this information our tools can visualize different useful physical characteristics and also offer improvements to the animation, to make it physically correct.

Let’s take as an example the most important physical characteristic of the character – its centre of mass. It is widely assumed that the centre of mass in a human character is static in the hip area. This simplification leads to tolerable results in basic motion sequences, such as walking or running. However, when it comes to acrobatic moves, such as somersaults, a dive jump or a martial arts performance, this model fails and the result obviously deviates from reality. In contrast to that, Cascadeur calculates the actual centre of mass of a body in every frame, and how this centre shifts by the movement of arms and legs or, for example, a heavy object in the hand of the character, such as the giant sword in this video sequence.

These are the core principles of Cascadeur. But of course that’s not all: an extensive set of physics tools helps the animator achieve exactly the result he desires. And we are by far not finished with the development. Our roadmap shows, which other features and functions we plan to add until the release.

b&a: What were the toughest parts of making physics-based animation work well? And how did you make Cascadeur but still provide enough ‘control’ for animators?

Tom Borovskis: First we made attempts to make real simulations via muscles and with forward dynamics usage – but they failed. Our animators really wanted to keep full control over the whole process. And forward simulation is very hard to predict. So our animators mostly did not use it, creating the whole animation themselves and mostly used Cascadeur’s visualization tools to track different physical characteristics.

This approach lead to good results, but it required a lot of skill from each animator. So in addition to the visualization tools we had different rules for the animators (outside of Cascadeur), stating how this physical characteristics behave throughout the animation. 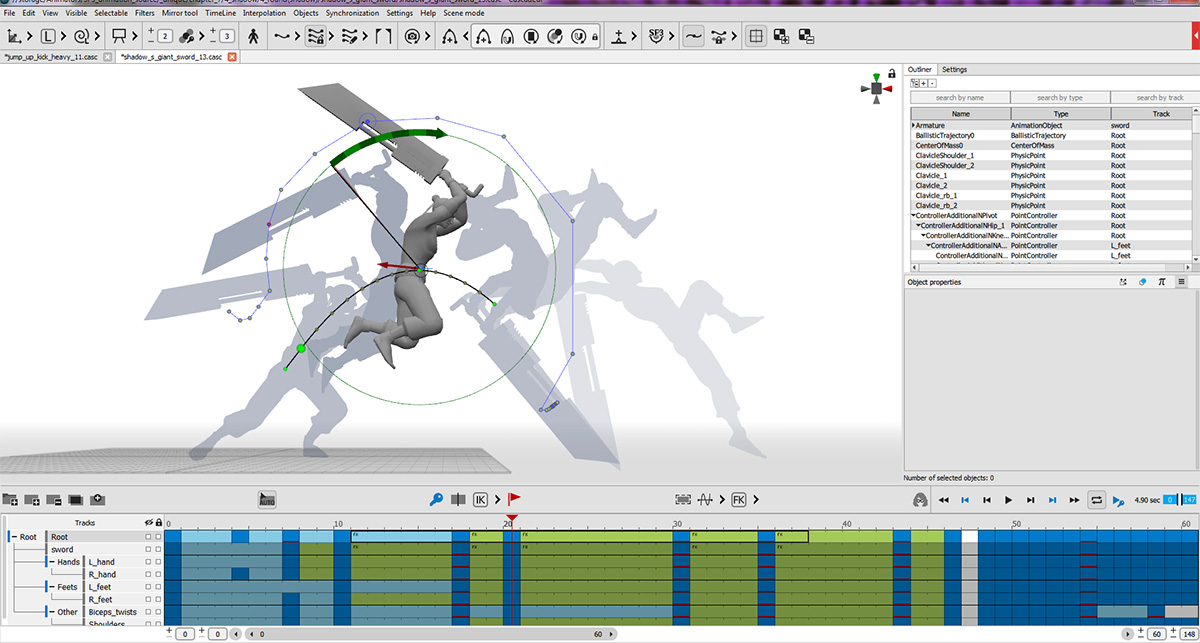 It took us some time to understand how physical tools should look like to be usable in our animators’ daily workflow. The key was to not affect the animation until the animator wants it himself! So most of our current physics tools don’t edit the animation directly. We added visualizations, that show what changes will be done by the tool. This way the animator can see the result before the tool has any affect on his actual scene. When the animator is satisfied with the results he can snap the character to the positions, suggested by the tool.

b&a: Can you give an example of a particular motion and how that would be achieved in Cascadeur, perhaps versus a traditional anim software (or even by mocap)?

Tom Borovskis: The best example is probably a dive jump. Look at the video of the Olympic tower springer, and how his axis of rotation changes when the athlete raises his arm during the jump. The complex rotation follows simple physical laws and results from the slight shift of the centre of mass of the jumper. But as simple as the underlying physical laws may be, an animator can not predict the reeling of the character. No matter how hard they try, they will not be able to reproduce the jump physically correct with traditional animation software. So far, motion capture has been the only way to fill this gap. However it’s pretty hard to mocap how a diver jumps.

With Cascadeur the animator gets rid of this constraint. They can concentrate fully on the creative side of his job, leaving the physical routine calculations to his computer. Now look at the jump sequence calculated with Cascadeur in comparison to the original video, and how realistic and correct the rotation of the body was generated by Cascadeur.

Another example is a somersault, and every animator who tried to make one, knows how hard it is to animate it manually in traditional software. For an animator who uses Cascadeur this isn’t a very complex task. Just recently we have released a 20-minute video tutorial that shows how to animate a physical correct somersault with our beta version.

b&a: What are you showing / demo’ing at SIGGRAPH? And how can artists get their hands on Cascadeur?

Tom Borovskis: First, on Sunday, July 28th, our CTO Alexander Grishanin will talk about Cascadeur in a 20-minute experience presentation  between 2pm – 3:30pm in the Theater in South Hall J. This will be a classical slideshow presentation about the making and the core principles of the software.  And then on Wednesday, July 31st, we will host a 90-minute workshop from 2pm – 3:30pm in the Studio. In this workshop our chief animator Evgeniy Khapugin will teach the participants how to create a realistic 3D fighting animation in Cascadeur.

They will learn the key features of physics-based character animation and will immediately apply the learned knowledge by creating an acrobatic action sequence. This workshop is a unique chance to learn the main features of physics-based character animation from an experienced professional, who has been using the software for more than 5 years now.

All other artists can already try out the beta version Cascadeur by registering on our website. We are sending out download links usually once per week.