DNEG’s crew breaks down layout, anim, FX, lighting and comp for a single VFX shot from the George Clooney show.

I wanted to find out how DNEG’s team, which was overseen by VFX supes Brian Connor and Dan Charbit and VFX producer Alun Cummins, tackled just one of 717 shots across 6 episodes and 105 sequences. That shot is 127_1090, a tail gunner shot which is typical of the kind of aerial shots DNEG delivered, in that it involved an entire B25 fleet which were all CG, wispy clouds, FX, flak, engine fire and a digital environment based on aerial photography.

So, follow along as the DNEG team break the shot into layout – animation – effects – lighting – compositing. This article includes other shots DNEG worked on as well, just so you can see the breadth of work involved.

Rick Curts (CG Layout Supervisor): For this shot the foreground bomber was in plate, so in Maya we would bring in the camera track and object tracks of the bomber. Then we would gather in the remaining front squadron, background squadrons, and cloud of flack. We would then create a blocking anim pass of the bombers flying through the flak. Making sure we place squadrons, so that they are easily readable but also showing the vast number of the whole fleet.  At this point it would go for review and the 1st round of notes.

Both the layout and anim department teams for C22 were fairly small.  Due to this layout and anim worked very closely with each other. This was very beneficial because at one point it was decided to remove the plate bomber and replace them with a full CG one. Notes from these reviews could be transitioned over to anim and turned over in a timely fashion, and because they were familiar with some of the layout tool sets they could address ripple effect notes, like adjusting flack explosion timings and background squadron formations.  Allowing layout artists to continue processing other shots.

Aside from the Yankee doodle, there were 11 other B-25’s created, each with their own individual decals and nose art.  Special groupings of squadrons were created to use for the middle ground and background, to round out and complete the fleet.

A flight crew of rear gunner, navigator, bombardier, pilot and co-pilot (lovingly named Hans and Franz) were created in order to populate all the bombers. 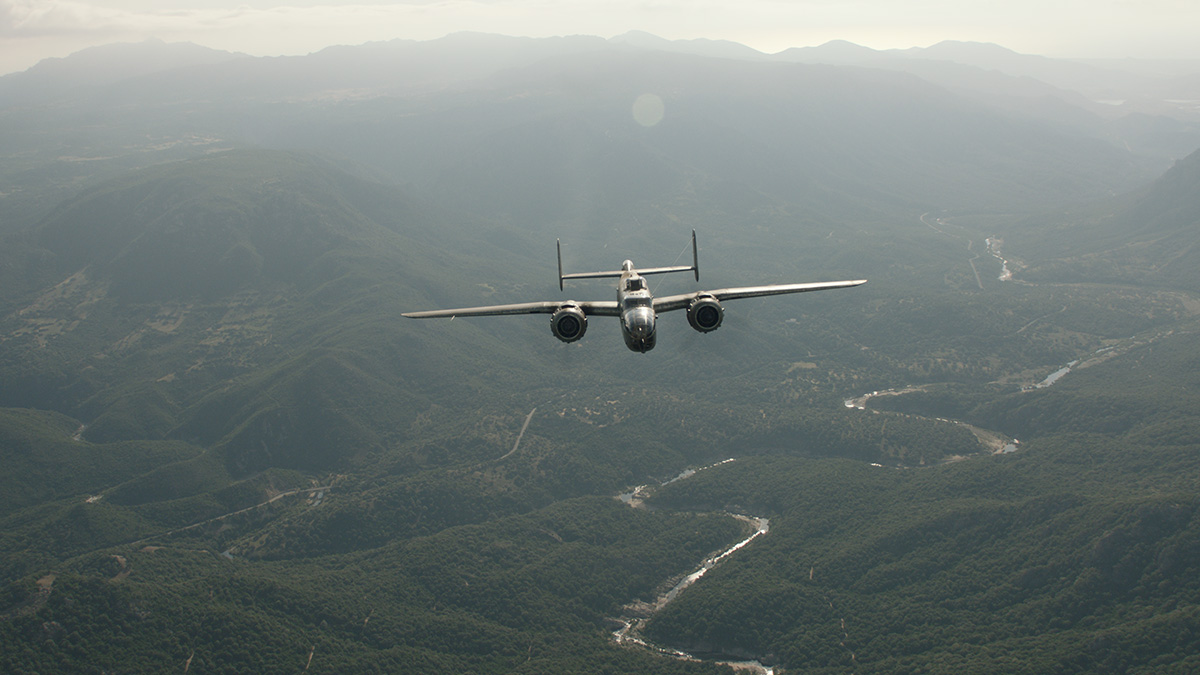 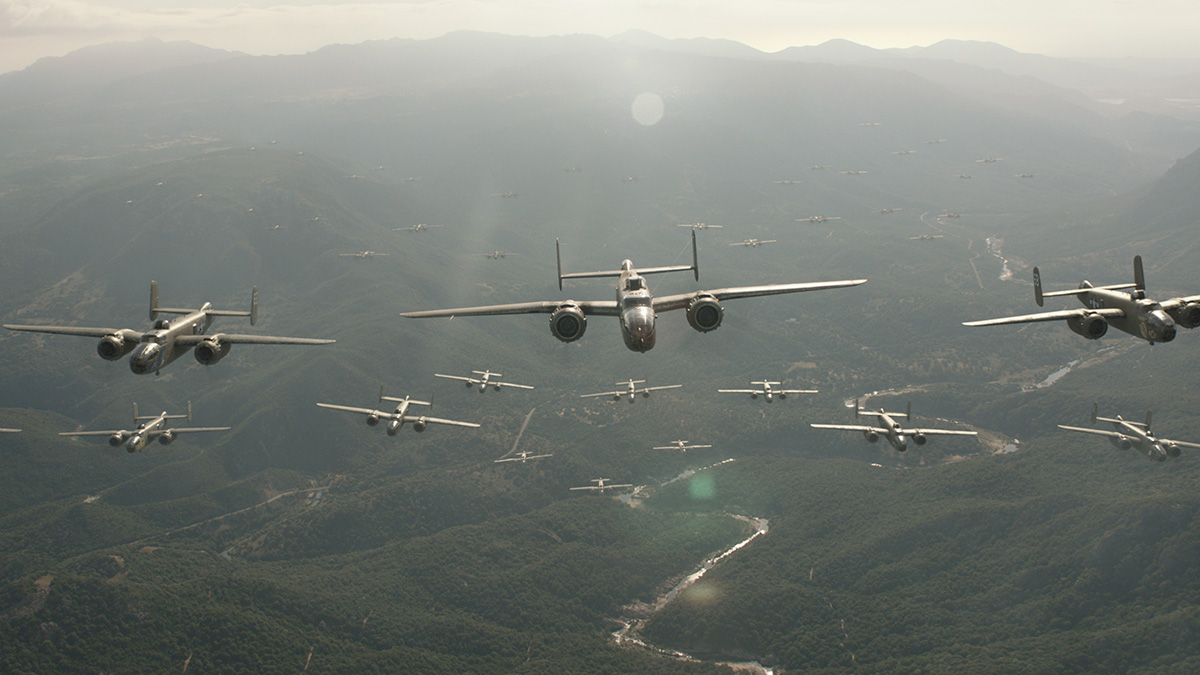 Exploding flack was created and then dispersed in a column or cloud of flak that was used in all the other flying shots.  We used a 3D model of Sardina to help us visualise the correct height and speed that the squadrons should be flying at.  This also helped us keep an eye out for continuity when bouncing back and forth between full plate and gimbal shots.

For full plate shots there were always at least one or two B-25’s in camera.  Jeremy Wong the matchmove supervisor would make sure that the bombers were tracked along with the camera.  Even though, for the most part, they would be replaced by full CG planes this was a very helpful step. Providing a solid foundation that both layout and anim could use to help address creative notes that would move away from the live action plate performance.

We had a standard speed for the planes and tried to keep as close to it as we could, but the exploding flak cache created by Marco Van De Merwe in FX, played a crucial roll in selling their speed.  Having the freedom to adjust their timing was an added bonus, allowing us to create more visually dynamic shots.

There were a few tools that we would use in layout for shots like these.One tool, that made our work lives a lot easier as well as help the layout and comp department communicate and relate better with each other, was a tool for the flak cloud. Gavin Harrison, the CG supervisor on the show, created a tool that influenced the timing of the explosions as the fleet of bombers flew through the cloud of flak. With this tool we could also generate information for comp artists to use, on shots where the final flak explosions were all 2D generated.

Thom Chang (lead animator): The main challenges in animation for Catch-22 were to establish the flight patterns of B-25 planes dodging exploding flaks in shots. The animation not only needs to work on individual planes, but also as a squadron in formation. Hence, plenty of research and effort was put into this aspect of this project. We realized that the speed and magnitude of the B-25s’ flight manoeuvres play an important role in keeping the planes feeling realistic, thus it was the case of finding the balance between these attributes to suit the overall direction and aesthetic of the film. 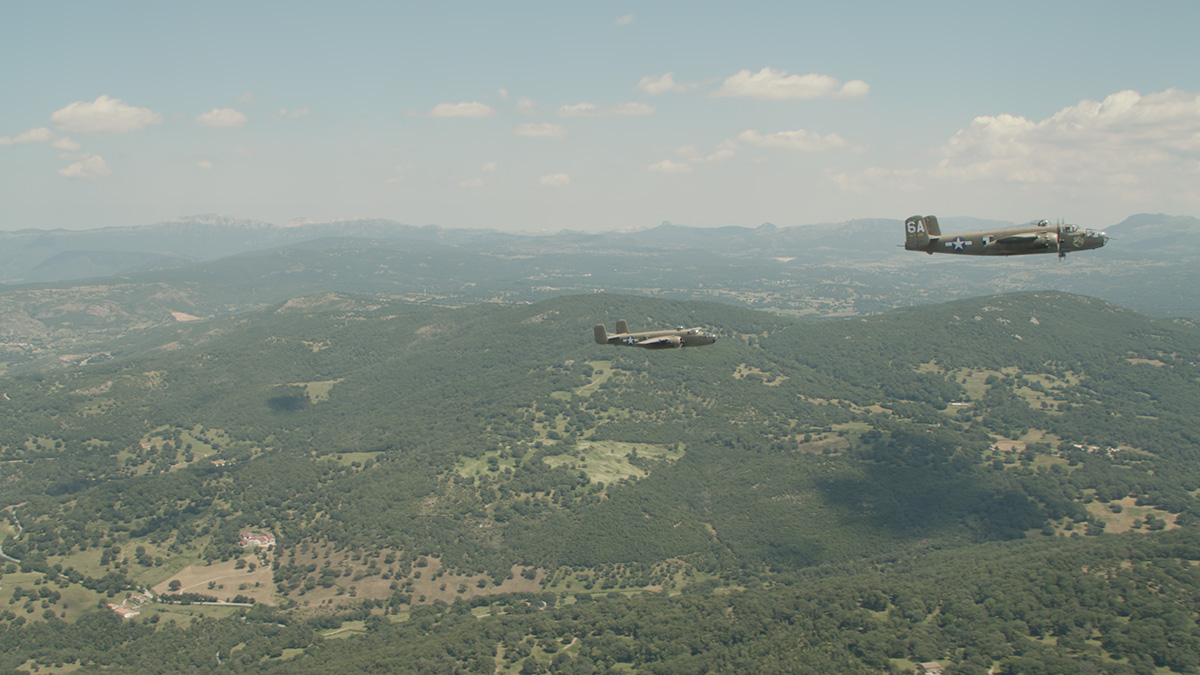 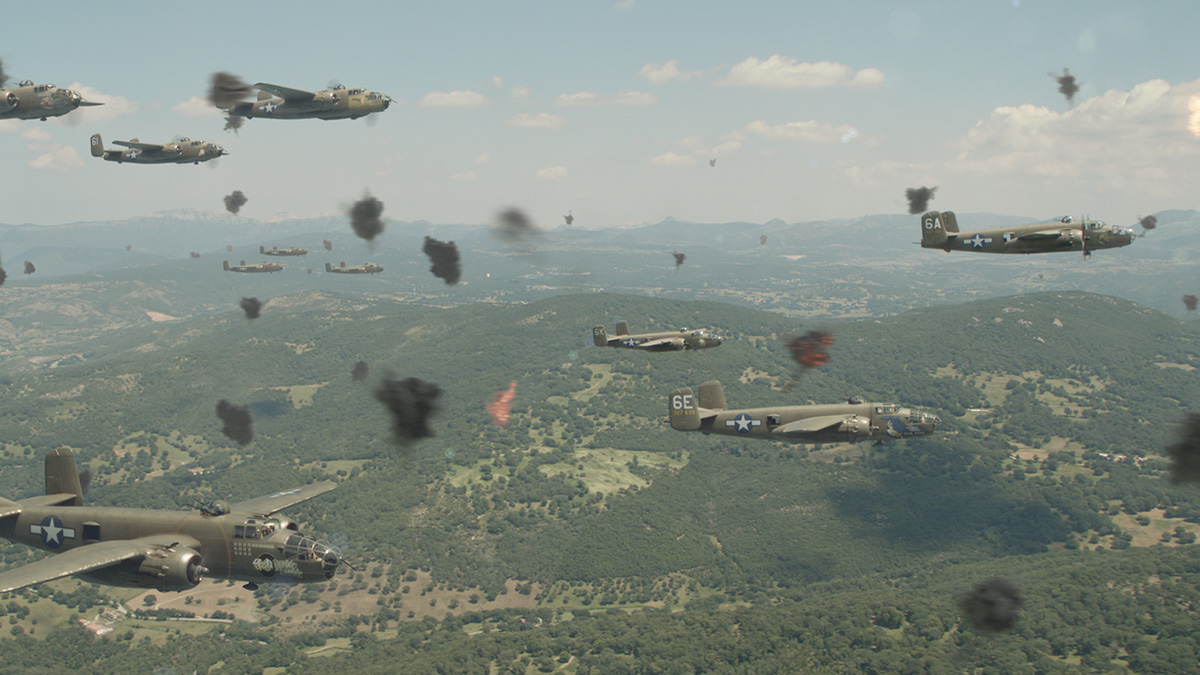 In shots like 127_1090, the hero B-25s are more choreographed in terms of their flight paths and movements as compared to the background B-25s to keep the shot exciting. The background planes are based off prebuild animation cycles or caches which are populated within the scene.

The secondary element in most of the shots are the exploding flaks and animation is in charge of driving the timing of these explosions before it is passed down to the other departments for specific shots. To manage the dense information, we have a tool to essentially visualize the flaks as proxy spheres which keeps the working environment manageable to work with. With the tool, we are also able to offset the timings of the explosions in relation to the planes’ flight paths with just a few clicks of the button. This gives us speedy turn around to address feedback from client and supervisors.

Marco van der Merwe (FX TD): Since we had so many shots to deliver that had flak in the scene and flak interacting with the planes we decided to go with an intelligent cache stamping system.   Firstly different flak elements were generated at the world origin – Various wedges of flak interacting with the plane at different angles.  Then the setup would look at the movement and orientation of the animated planes and calculate points in the flight path.

These points get assigned a trigger value, which is then used to randomise and play the generated caches at the correct time when the planes pass by.   This comes together with a final believable result that the planes are actually interacting with the flak in their path. The trailing smoke from a flak hit was done this same way but now at the trigger point the smoke caches are parented and oriented to the plane animation.  By doing it this way and re-using the same flak caches over and over we managed to save a ton of time and disk space as opposed to creating unique assets for every shot. 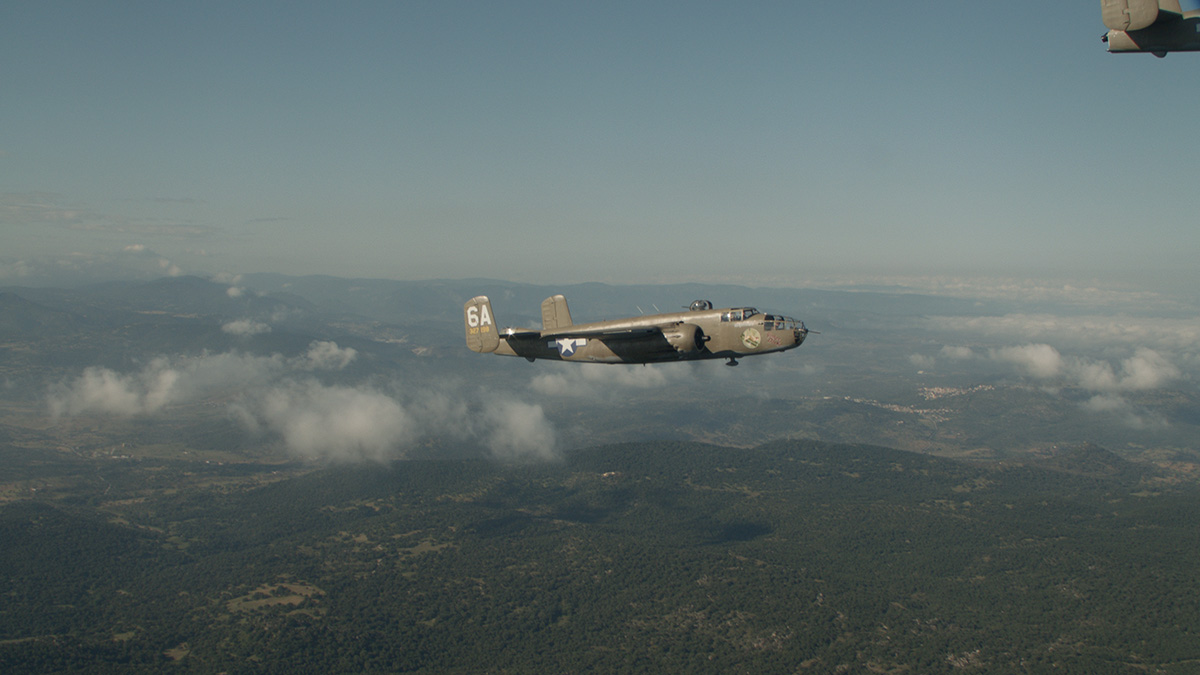 The average turn-around for inserting flak into a scene was less than a day, mere hours in some cases. It could be blindly run on the farm and the procedural nature of the setup would deliver predictable results.  The clouds were generated with a procedural wedging setup. An initial setup and lookdev of one type of cloud is done and then it’s randomized within the established rules and wedged out for multiple volume variations.

Accompanying lower ‘Level Of Detail’ (LOD100) Geo meshes of the FX Flak and Clouds were generated as well. The lower LOD100s are passed to layout to strategically place, which lighting replaces with the actual high res volume sims at render time.

Casey Gorton (lighting lead): The overall lighting design was based from the cinematography on set of Catch-22. It was a well developed lighting scheme and the support DNEG offered to have shot an HDRI for all the ground sequences was truly beneficial. This enabled a higher level of photo-realism. For this aerial shot there was a practical plane and plate to match the CG planes and FX elements. One of many great challenges of photo-realistic lighting can be not having something in the real world to match to, this can throw things off such as scale and just how light reacts with objects that we see or can be seen everyday.

We know ‘what it should look like’ so the slightest difference can formulate a visual mistake. When we have a plane being shot on camera and place a CG plane next to it, there is no room for error. The lookdev for the planes as well as the exceptional direction from Brian Connor, DNEG VFX supervisor, made this work seamless. Adding various CG elements such as the flak exploding, interacting with the planes and additional clouds as well heightened the action. The primary renderer used was Clarisse it offered versatility and speed throughout the shots as well the ability to provide compositing the layering needed. 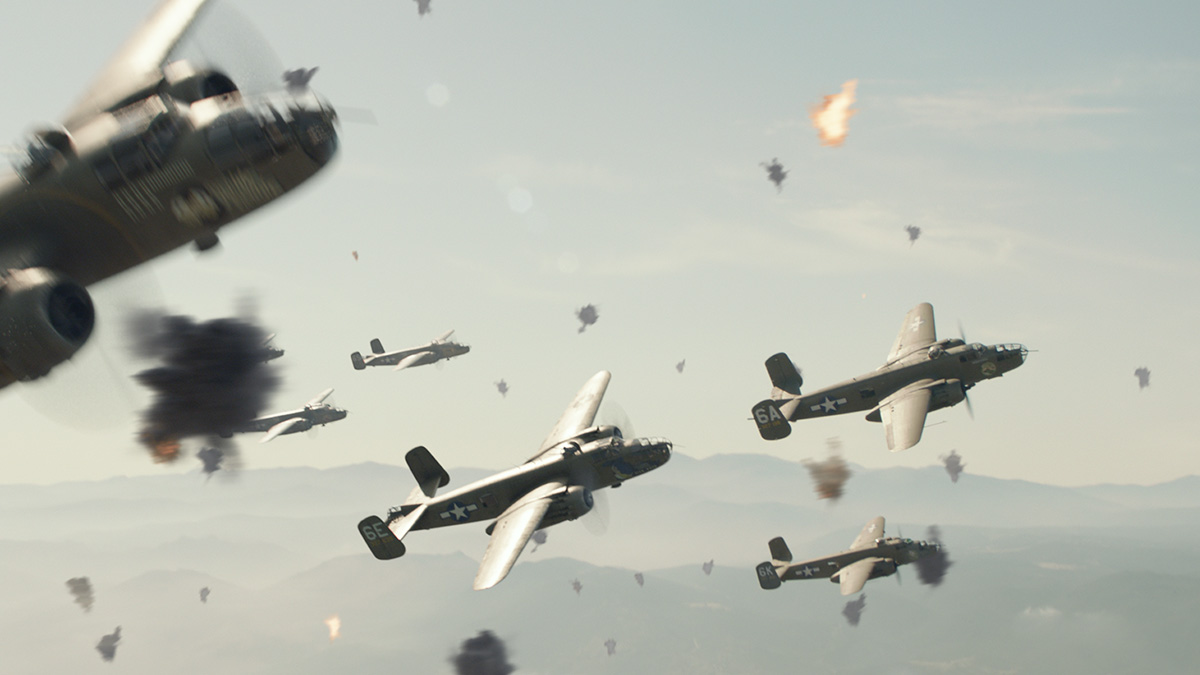 Brandy Zumkley (compositor): As a compositor, the shots that contain so many different elements that interact with each other that come to you from different departments means it’s challenging to make sure everything is layered and interacting correctly. Being at the end of the pipeline you have to keep track of all these elements, making sure they are up to date and well organized.

Once that is figured out it then comes down to making sure everything is matching the plate and surrounding shots while keeping the colour integrity of the plate. As well as being aware of the color temperatures on the elements and their interaction with the environment, adding glints, flares, extra clouds to make a prettier picture. On this show I was able to work with so many talented people that it actually made things go quite smooth and with great results.