In writing about VFX, I’m sometimes guilty of describing perhaps in too simple terms how a shot or sequence goes from concept to final. There are, of course, so many steps along the way, and I was intrigued how perhaps just one department, such as compositing, handles its part of the process.

So I asked Digital Domain compositing supervisor Francis Puthanangadi how he and his team dealt with a single set of shots for Shazam!, when the lead character played by Zachary Levi is showing off his superhero skills – specifically ‘lightning with his hands’ atop the Philadelphia Museum of Art (also known the ‘Rocky Steps’). It was a sequence that was actually part of re-shoots to make Shazam’s presence in Philadelphia be even more iconic.

Puthanangadi breaks down that that then involved in terms of matching new plates shot in cloudy overcast conditions with the surrounding sunlit scenes filmed previously, how DD added lightning bolts and what was involved in taking the shots to completion.

Francis Puthanangadi: What happened for this part of the sequence was that the production team wasn’t completely pleased with the location and the performance of the original photography that was shot. They decided to make it a bit more iconic, and that’s when they decided they were going to re-shoot it on top of those Rocky Steps.

This ended up being several months later [than the original photography] and now it was a wet and foggy day. So the challenging part for us was that the new photography cut to the following sequence which was quite sunny on the other side. And they need to connect these two worlds together. 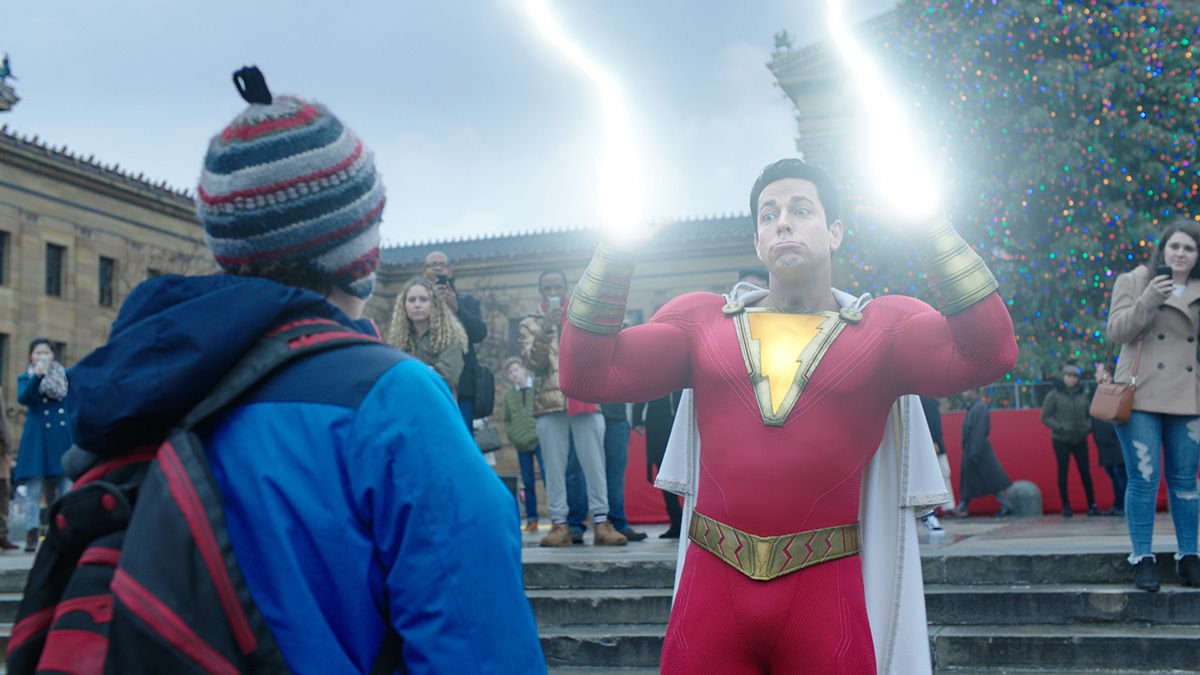 We had to process the plate quite a bit in terms of the color and in terms of the brightness, to make it look like a day shot, not a foggy shot. So we decided we had to do an extensive re-build. We needed the environment team to go and re-build the Ben Franklin Parkway, and the Philadelphia skyline. That itself was a massive task. This took several days and once they started building they’d start feeding the compositing team with a new set-up. 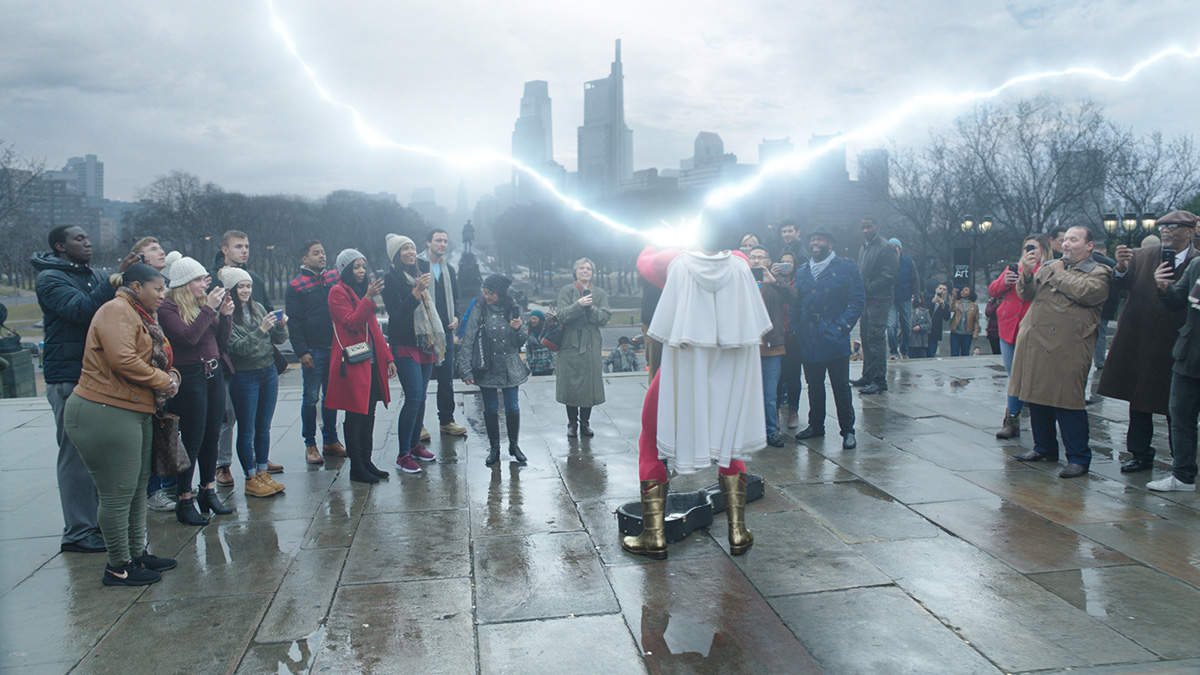 Another upstream department is the FX department, which would be feeding us with the lightning bolts. The most important thing with them was that they needed to look real, tell the story and work in terms of timing. We had to have these connection points from his hand to the destination points. And the energy need to travel from his hand to the destination.

Once we received the element from FX, which included paths of inside the element, in comp we’d work to break it up more, meaning break up the complexity. We would also just add to the life of the fingers or when the lightning bolts just originate, and how they originate. The energy comes out with a stronger light, interactively lighting up his hand. And then as it leaves the energy just renews a little bit and then another wave comes in. It’s like a pocket of energy that keeps on traveling as the lightning progresses. Then on top of that we add our own blur treatment – it’s like a glow but the light or the power will be exponential.

We also had to make interactive lighting, on Shazam, on Freddy and all the people around them, since it was shot without any interactive lighting. That involved a lot of articulated roto around these people to separate them out. And then we started making our own directional lighting mattes – lighting mattes that we can actually use and color correct and add additional lighting effects in for each and every lightning bolt that he shoots out. 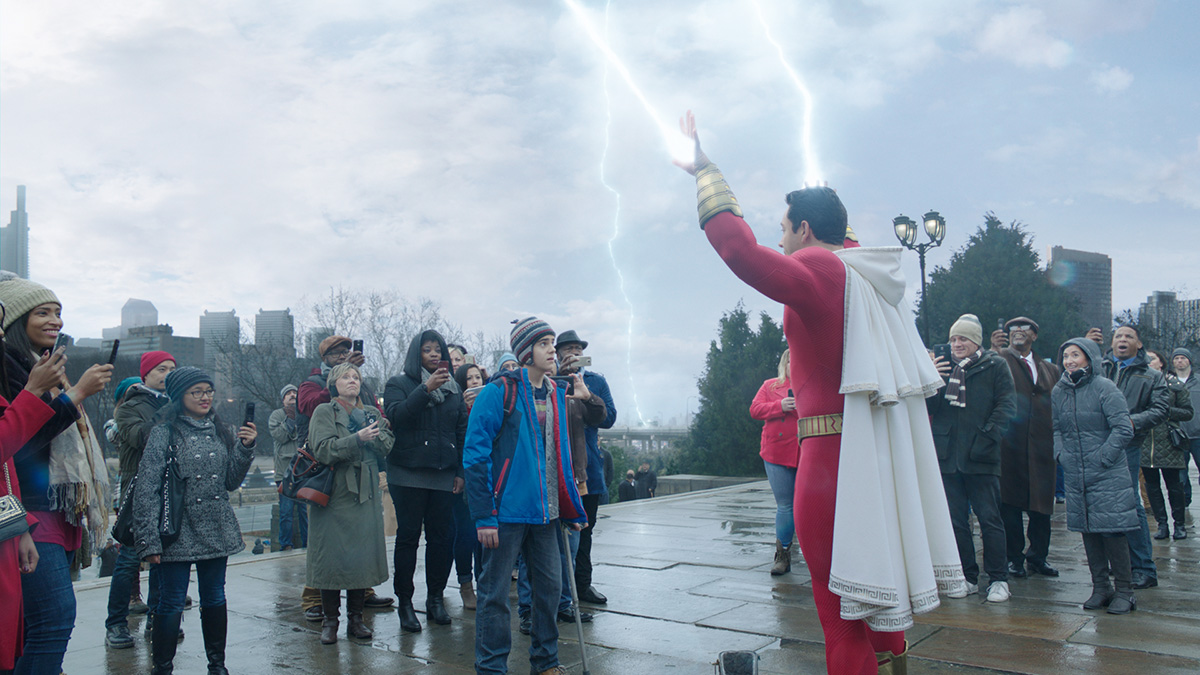 On top of these three main departments (environment, FX and comp), we also use a lot of stock library footage. At times it makes sense to go and add, or extract, elements from these libraries and start mixing it into our shots. Some examples are fog, rain, mist or fire. We also rely sometimes on specific lens flare elements. Even though you have tools to generate all these wonderful lens flares, sometimes we rely on the original photographic quality of an original lens flare.

I think one of the main reasons this work was particularly challenging was that, at least one of the shots was 250 frames, so that made it really a long shot. And there were sometimes 30 or 40 people in there. The whole shot is very dynamic, and lightning itself is very subjective, in terms of what the client is looking for. The whole look, how the energy should move – it took a while to get everything right. 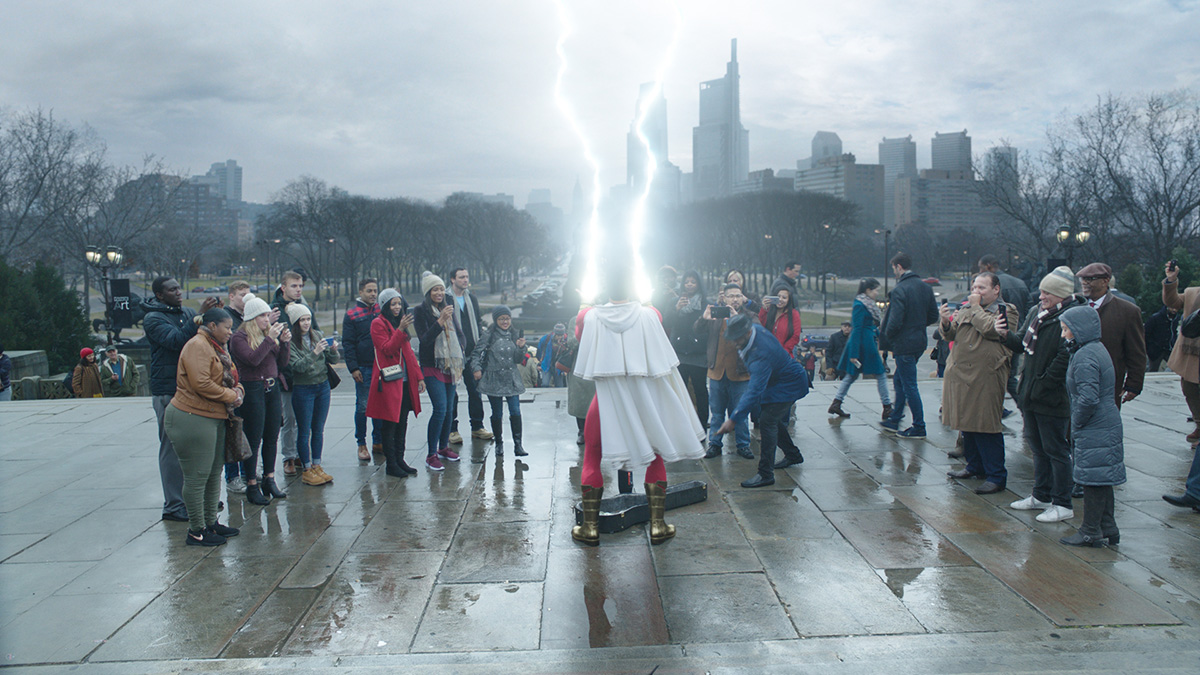