What Luma Pictures had to solve – not just on the technical side – when crafting their ‘Captain Marvel’ train chase.

The final shots certainly involved a swathe of meticulous 2D and 3D work, but befores & afters wondered what other things Luma had to consider above and beyond the technical VFX work, in terms of the ‘feel’ of the sequence, inspiration from other films, how they would use existing locations to construct the shots, and making sure it felt like it all took place in the mid-90’s.

Luma Pictures visual effects supervisor Kevin Souls let us in on those considerations.

Kevin Souls: This is an easy one. The production name for the sequence was The French Connection, a call back to the seminal action movie from the 70’s and stylistically that was the target. Our goal was to keep it as grounded as possible—gritty even. If you think about those movies and how and why they were made, it was the invention of lightweight handheld cameras that could go anywhere and be placed inconspicuously (I’ve read that The French Connection car chase was shot without permits on uncleared streets). As a result, you really feel connected to the action— you’re in the car, you’re on the street, you’re there.

Creating a sense of speed

We really wanted to convey a fast moving chase. In a car it’s easy to do, you’ve got the curb and other cars whizzing past. What we discovered was that it’s tough to read speed on a train because it’s so far away from everything, so we knew we would need to augment the environment to make it impactful.

From the start, shooting on location was an essential aspect of the photography. To establish the train environment, during pre-production we ran several array passes down the actual train lines using a metro rail truck specially modified with an array camera rig. This gave us the full run of the track for the entire chase. We knew we were going to retime the array plates so we configured the camera frame rate and shutter angle carefully to minimize motion blur and maximize the number of frames captured. Later in the sequence (in the Pico Aliso sections) we captured array plate from the train line and also from the adjacent street, to cover the drive-by shots in that section.

We acquired Lidar where-ever we could, but for the long sections of elevated train run where it wasn’t possible to acquire Lidar, we ran the array plates through Reality Capture to create reference geometry. There were two sections of the car chase. The West LA chase was all shot practically, and in those shots, we augmented the exteriors with CG. During the DTLA car chase, we shot exterior car plates in DTLA and then swapped out the hero car for the array car to get an array pass for the interior plates. The interior plates were all greenscreen, comped into a fully reconstructed projection environment based off the array plates. 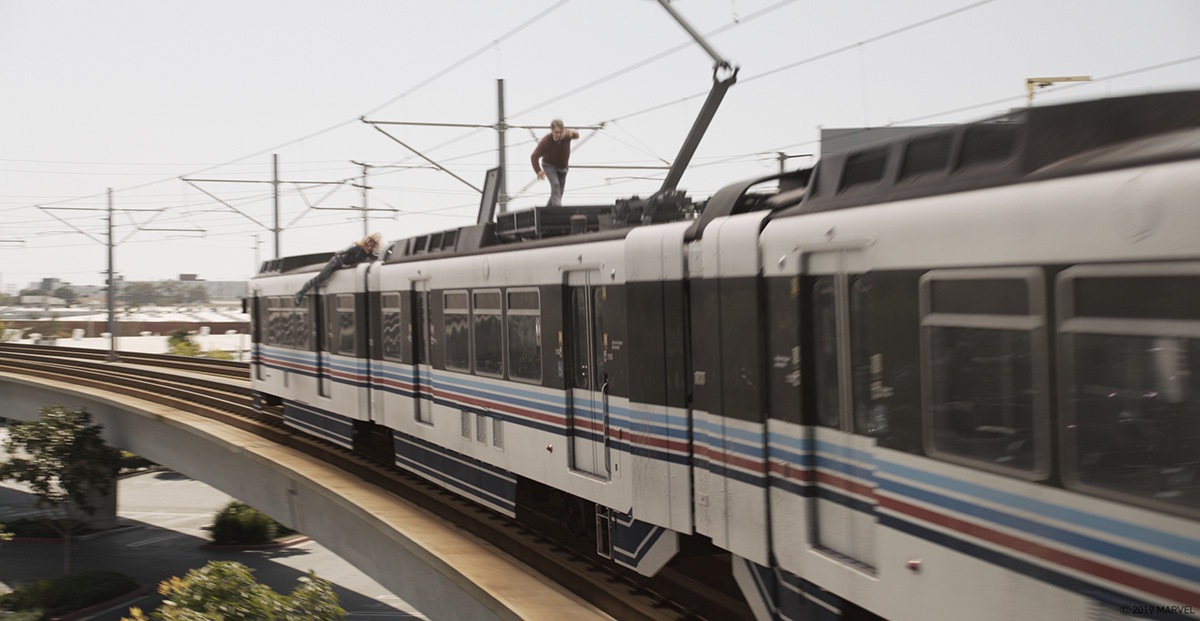 For the most part, this involved getting rid of police street lock off, production rigging replacing signage, and adding or replacing cars. Continuity was actually our biggest environmental challenge. During the car chase, several shots required us to completely replace everything out the windows of the car with a new environment, and in one case, everything around the car and train. For the Pico Aliso area, we moved the position of DTLA and replaced the train tunnel with a larger CG entrance, and we created a completely virtual environment for the photon blast area.