The helicopter crash scene in The Matrix, as Neo rescues Trinity, is one of those sequences where everything came together – miniatures, live action, stunts, CGI, pyrotechnics and compositing – to make a glorious set of final shots. It’s punctuated by the chopper crashing into a building, causing a ripple effect and a glass-filled explosion of ever expanding circles.

To help make that possible, special effects supervisor Steve Courtley worked with the directors, visual effects players, stunts team and other key crew members on the film to oversee the in-camera, mechanical and pyrotechnic work. befores & afters re-visits with Courtley just how that classic chopper crash was done.

Making the most of planning and previs

Steve Courtley: I recall the storyboards as if it was two days before yesterday – twenty years ago! All major sequences were brilliantly conceptualized and storyboarded by the Wachowskis and their storyboard artists. The previs included the various camera positions within the complex greenscreen set, the approach and impact of the chopper as well as the ripple effect on the building and the all-important cuts and camera angles. 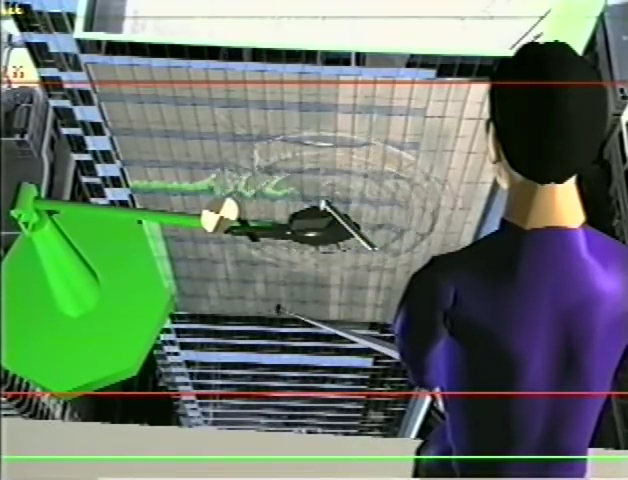 It provided us with a mechanism to spatially plan and time the mechanical and pyro effects to best integrate with the visual effects elements. We worked hand in glove with the VFX team and the previs to precisely plot the trajectory and point of impact of the model chopper against the scaled building façade. The timings for the helicopter travel, chopper rotor speed, blast wave delay patterns on the building and the fireball pyro were also drawn from the previs information where possible. The final integration of the live action and visual effects elements was seamless!

Steve Courtley: Miniature or model pyrotechnics don’t relate to the ‘usual’ kind of blasts. The two skilled pyrotechnicians tasked with the fireball effect (Paul Gorrie and Leo Henry) did a lot of tests to narrow down the types of pyro and provide the correct scale, color temperature and visuals to the impact explosion.

The concentric rings in the glass involved a whole series of tests which examined glass types, glass breakage patterns, methods of glass support and attachment, explosive types and initiation methods and explosive flash suppression techniques as well as the various breakaway elements for the moment of the chopper impact, amongst other criteria. We worked through quite a few different combinations until we were all happy with the look of the whole effect.

Steve Courtley: The chopper swing arm was the best mechanism to accurately deliver the chopper into the specific breakaway zone within the glass building façade. Special effects engineer (the extremely talented) Dave Pride worked with the VFX previs team to plot a series of points that were then converted into a mechanical delivery guide on the swinging arm. 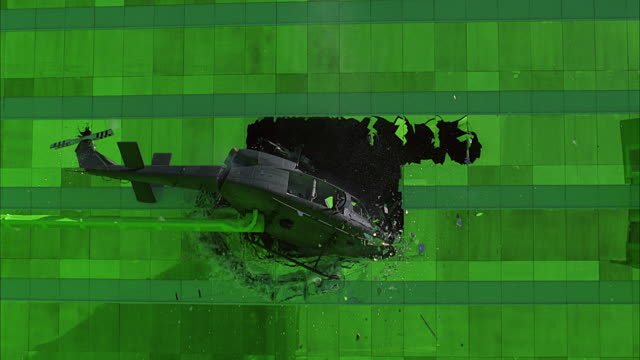 The set for the chopper crash was located just out of Sydney at the then Londonderry Worksafe test range. The set consisted of a greenscreen valley, and needed so much light that, in the outdoor setting, the sun provided the best source. The main challenge on the day was that there was only a twenty-minute time window where the sun and the greenscreen set aligned to provide the necessary light levels. We had a message from our producer that we had only one crack/one day to get the shot. Everyone on the entire crew had to work our collective tails off to get everything in place safely and functioning correctly in time. I think we were ready to ‘turn over’ with only minutes to spare.

The final helicopter crash sequence was composited by Dfilm and also included several CG additions – more of the studio’s work for the film is featured in an upcoming MATRIX week story.

One Reply to “Anatomy of a crash: ‘The Matrix’s’ stunning helicopter scene”