The ILM veteran breaks down 3 of his classic ‘how did they do that?’ film effects

Ever watch a scene from a movie and go, ‘How’d they do that?’ Like, ‘Really, how’d they do that?’ Sure, it might be clear that some kind of visual effects trickery was involved, but you still wonder about how they actually pulled it off?

Industrial Light & Magic (ILM) Senior Visual Effects Supervisor and Creative Director Dennis Muren is a master of shots just like that. While his work has of course been digested and analyzed over the years, there are many shots and sequences that he’s been part where it isn’t abundantly clear, at least at first, how they were done.

To find out the secrets of pulling off a seamless effect that also doesn’t necessarily feel like one, befores & afters sat down with Muren to discuss the speeder bike shots in Return of the Jedi, the mine car chase in Indiana Jones and the Temple of Doom and some explosive action from War of the Worlds.

Return of the Jedi

Luke Skywalker and Princess Leia evade several scout troopers on speeder bikes through the dense forest on Endor. Background plates were famously acquired by Steadicam inventor Garrett Brown walking through the forest with the stabilized rig and shooting at about one frame a second; played back at normal speed it made the forest appear to be whipping by.

Dennis Muren: We did a test in a redwood forest park near ILM’s San Francisco studio. I flew Garrett out, we shot the scene on VistaVision, because that’s the only gear we had at that time. We found an area we could walk through where there was a wooded path through a section of the park. It was pretty shaky, but it looked pretty neat. I was worried it was going to be too shaky but we sent the film to George Lucas, and I said, “what do you think? Is it too shaky?” he said, “no, I like it ‘cause it has a lot of energy to it.”

We had shot some animatics with models but it’s something where I realized we would have to have this huge model because of the distances covered. And I wanted it to be real. I felt if the rest of the movie’s real, this should be real, too. There is at least one model shot still in there – it’s looking down, because I couldn’t figure out how to get the camera 12 feet up in the air while simultaneously moving forward 100-feet.

There was a matter of finding areas in the forest where we shot it where the stretch was long enough where you didn’t have 1000-feet where you could get a nice curve and then it was going to level out. Then Garrett knew exactly what he was walking on. We set up a thin string running the length of the path we were planning to walk along for the shot. The string was positioned at Garrett’s camera height so as he was walking on the uneven ground surface he could keep the camera at a consistent level.

The background plates and the foreground plates – which included bluescreens of the riders and bikes – seemed to come together pretty well in comp. Maybe it was the fact that most of the shots were shot in dappled sunlight, so there’s spotty sunlight coming through the forest canopy, so we were traveling quickly through pools of sunlight into sections of shade. So, not only was it a bit blurry due to the speed; it was flashy, and I had all of that lighting going on the same way on the actors. It made it blend together quite well.

Indiana Jones and the Temple of Doom

The elaborate mine car sequence saw a mix of miniatures, practical effects and live action scenes combine to form a seamless result; many would not realize that ILM had engineered a 35mm Nikon SLR camera (affectionately named the Nikonflex) with a stepper motor to ride on the miniature mine car tracks to record part of the action for the scene.

We needed to do this as a model, because all Steven Spielberg had was this loop around the stage, so we knew we needed the wide shots. Now, ILM was really full at that time and the stages were all booked with other shows that were in production. This meant we had to come up with a solution that would work on a smaller stage space. I like things small, because I can control them, they’re less expensive but being small also has the benefit of being easier to light. You can detail every inch of the set, so I‘m a fan of utilizing miniatures whenever possible. If you don’t do them right, they can often look fake. But if you take the time to do build, detail, light and film them correctly, you can create something that looks fantastically realistic without ever giving away that it was created at a smaller scale.

So, since we were going to utilize this smaller stage space the first order of business was to figure out that the longest run we’d need. This of course would be based on how large the camera was. I knew I wanted to put the camera on the track, not have it riding along separately. So, we calculated that the track had to be 120-feet long with the smallest camera we had. Then the question became, “what’s the smallest camera we can get?” We wanted to shoot the scene in VistaVision, but the traditional cameras were too large so we wondered, why couldn’t we modify and use a stills camera?

At the time I was working with Mike McAlister, who’s really a sharp guy. I said, “Mike, I hope we can do this,” and he said, “Yeah, I think we can do it.” And we did it. The still camera worked because we were shooting stop motion, one frame at a time and not the normal 24fps. Everything was smaller, the production saved a fair amount of money, the set was made of heavy-gauge aluminum foil painted and dressed to look like rock, so we could just re-crinkle the set, the foil, to make the cave walls look different. What a great thing to do – there wasn’t all this concrete and plaster and everything – the whole thing became flexible enough that it was malleable, as things get bigger, they get heavier and you can’t adjust them as easily. But you watch the sequence and you’d never really know.

War of the Worlds

Desperate to take his family away from the threat of attacking alien tripods, a father (portrayed by Tom Cruise) speeds away from a bridge and overpass that explodes behind his vehicle, raining down concrete, cars and even a tanker semi-trailer onto houses below. The shot seems to last longer than you might expect.

The car is of course a live action plate, but the background contains a number of practical miniature houses combined with full CG highway flyovers. So, the tanker truck falling is a model, some of the houses that get hit are models, and there’s big explosions that are just the explosions. I didn’t want to go to a completely miniature scene at the end, ‘cause that would not have looked right, and I needed the CG at the beginning for that wrap around. Steven Spielberg originally wanted that bridge to be blown up and be like a tail on a scorpion, where it would just wrap around itself – which was pretty neat, but I didn’t know how make it look like that, and happen naturally. So we did this other kind of destruction – a real staccato effect. 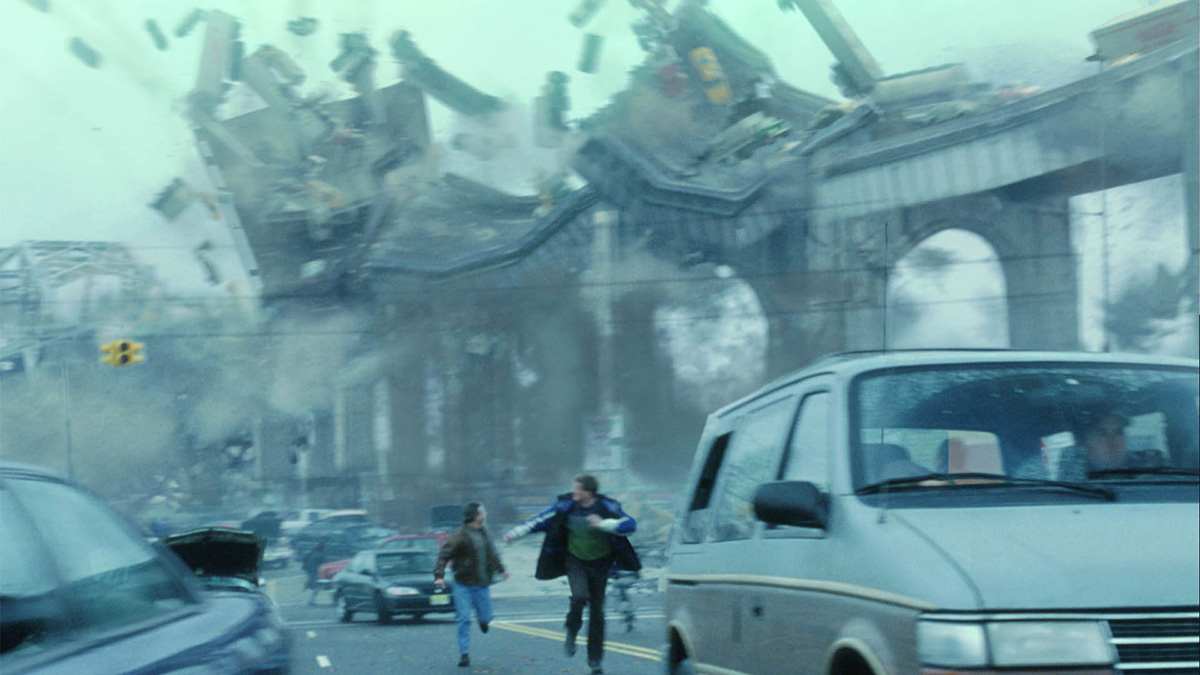 The scene, that whole approach, was a reaction to something I’ve seen in commercials at the time, where you would just shoot elements and stick them into shots. In commercials, you just do it. You don’t have time to try lots of different things. So, that’s mainly what the second half of that shot is – it’s still using the real footage, but the explosions and a lot of the cars falling are models. But it was all a choice that this was the best way to achieve the desired effect, and then they were match moved in from static shots done later on.

befores & afters talked to Dennis Muren at the VIEW Conference in Turin.