Some extra things shared in breakdowns and discussion at the Academy event.

The Academy VFX Branch hosted its Visual Effects Bake-Off on Saturday. The event is held to narrow down 10 shortlisted films for the VFX Oscar to the 5 nominees. befores & afters got to be in the audience.

Each of the 10 films goes through a presentation on stage. First, one of the VFX supervisors on a  film in contention runs through some key notes about the work while a 3 minute VFX breakdown reel plays. Then a 10 minute reel of finished shots from the film plays. Then, reps from each film go on stage to be asked questions from the VFX Branch governors.

The event was fantastically run–every presentation was top-notch, and the format worked so well. VFX Branch Academy members will vote on the films.

The films in contention were: All Quiet on the Western Front, The Batman, Black Panther: Wakanda Forever, Doctor Strange in the Multiverse of Madness, Fantastic Beasts: The Secrets of Dumbledore, Thirteen Lives, Top Gun: Maverick, Jurassic World Dominion, Nope and Avatar: The Way of Water.

Just about all these films have been covered in-depth at befores & afters, so, instead of recounting what each presentation included, I’m going to just mention some NEW VFX things I heard or saw for the first time for each film at the Bake-Off. Here we go… 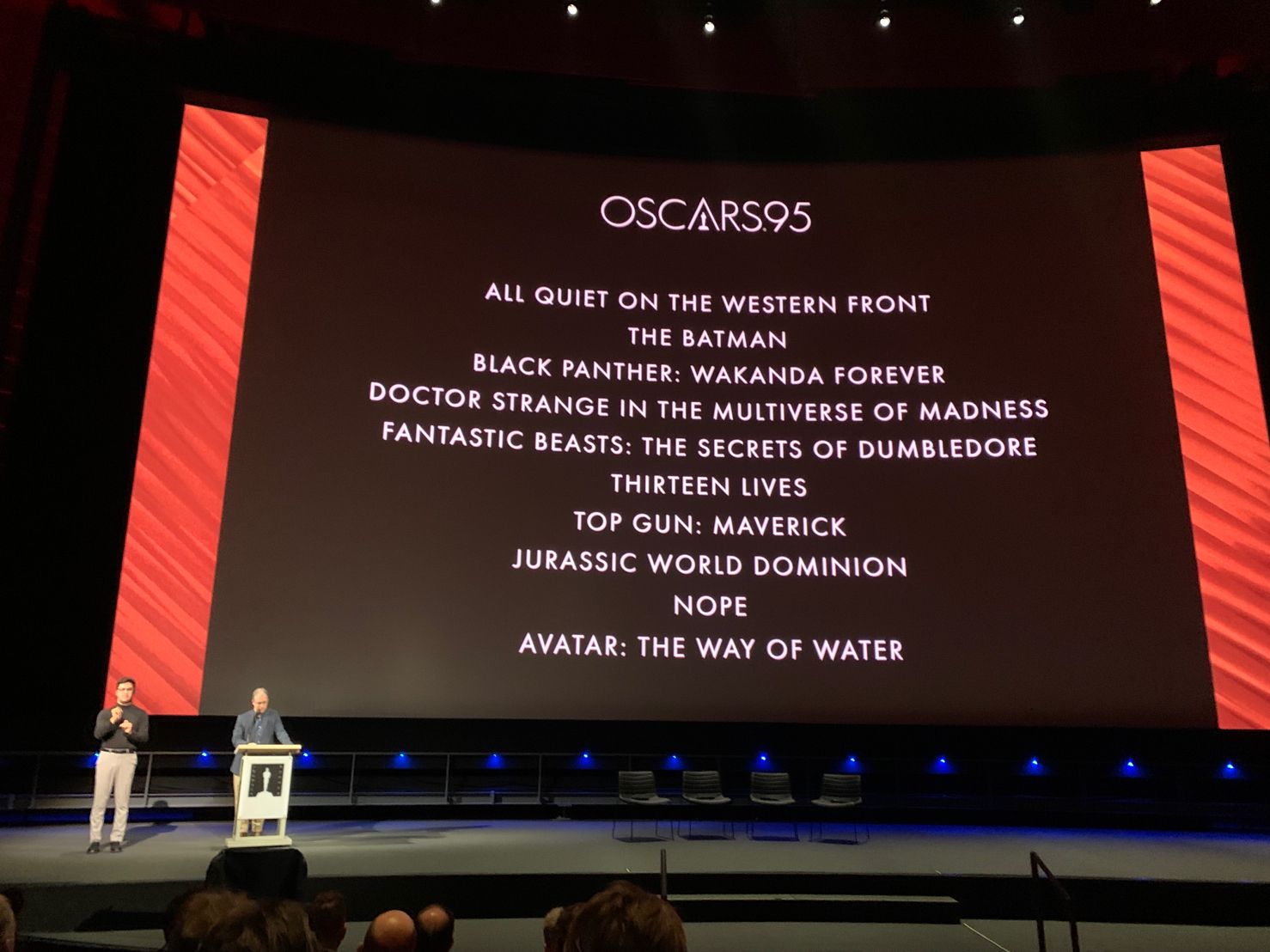 All Quiet on the Western Front: It’s not so much about seeing any major technical breakthroughs, but the breakdowns shown for this film at the Bake-Off left me (and I’m sure others) wondering where the on-set practical smoke, smoke elements, and digital smoke elements began and where they ended. They are so well integrated into each scene. It was fun to hear about the tanks as ‘creatures’.

The Batman: I’d already heard about the efforts of the VFX team to match the lens results from DOP Greig Fraser who covered camera lenses in silicone on set to simulate rain and dirt. The breakdowns revealed at the Bake-Off had footage of what that actually looked like on the lens on set, and how the VFX team tackled it (it also got a major laugh from the knowing audience). Fun conversation was also had about the many Batmobiles required to be built and rigged for the chase scene.

Black Panther: Wakanda Forever: An impressive behind the scenes moment shown in the breakdowns featured miniature maquettes/mock-ups of the city in Wakanda for when it is attacked. These were made to help orchestrate the large-scale practical flooding effects for the actual set-pieces. Dry-for-wet shooting was also featured, including the idea that for some shots the actors did shoot underwater, then re-created their performance dry in order to make it ‘feel’ like they were underwater.

Doctor Strange in the Multiverse of Madness: A really insightful part of the imagery in this presentation related to the fight between Earth-838’s Illuminati and Wanda. The actors playing Captain Carter, Captain Marvel, Black Bolt and Reed Richards were simply never filmed in the same room together, so it was fascinating seeing their individual pieces of footage (of the actors and stand-ins) wearing fauxcap suits which would be replaced with their digital costumes later.

Fantastic Beasts: The Secrets of Dumbledore: The Qilin creature work in the show was a fun thing to see showcased here, including the on-set puppetry that took place directly with the actors and that made use of LED lights to help with interactive lighting. Also covered was the significant use of virtual production, VR and previs explored to help shoot scenes (especially during COVID restrictions) and to realize so much of the film’s VFX work.

Thirteen Lives: After watching the breakdown and 10 minutes reels, I felt that the audience still couldn’t quite believe that some of the cave footage was shot in tank sets (in Queensland) and not in actual caves. The special effects reps talked about that, including how they were able to reverse water flows where necessary. A big laugh came from a comment about the dirtyness of the tank water at the beginning of the week versus the end, which drove when close-ups of the actors were filmed.

Top Gun: Maverick: OK, so, we saw a full 3 minute VFX breakdown of the work in this amazing film. And it did reveal the combination of real aerial photography, CG planes, CG ‘skinning’ of stand-in planes (it’s lucky most planes are gray, was one comment by the team), and some on-set cockpit work (mainly for the experimental aircraft, although we were advised of other cockpit gimbal work done in direct sunlight). An interesting discussion took place about the tracking methodology employed which involved GPS tracking for 3D data from the actual camera planes in combination with topographical data in order to properly convey lighting changes on the fast-moving jets.

Jurassic World Dominion: Three really fun moments from this film’s presentation: for the montage of dinos around the world, stock footage or footage from other films and shows was used, including for the mosasaurs attack on the fishing boat, which was actually re-purposed from Deadliest Catch. Also, when some of the shots of the plane in the film taking off from Malta were revealed to be a forced perspective miniature, the crowd literally went wild. The third moment involved the chase in Malta, which no principal actor attended. Stand-ins were used to film the whole thing as-is, and then a road rig, bluescreen set-up and array cameras used to capture the key actors like Chris Pratt and comp them in.

Nope: Nope has been covered in a big way at befores & afters, but I have to say what made the audience react at this VFX presentation related to two things: the chimp Gordy’s attack as portrayed by Terry Notary, and the use of helicopters as basically giant dust/wind machines on set. The day-for-night breakdown, which included a look at how some color was also brought back in where necessary, was fantastic.

Avatar: The Way of Water: The VFX audience gasped at several things in this presentation, most notably the on-set use of a kabuki/cable-cam system for playback when live-action actors were performing part of their scenes, and the on-set depth compositing footage (which even recognized moving water). Footage of Wētā FX’s new facial animation muscle strains system which uses a neural network, and behind the scenes video of its water simulation toolset, also marveled the crowd, as did discussion of the methodology to incorporate above and below the water into the performance capture with different kinds of light (ultraviolet and infrared – ‘it worked first time!’).

Good luck to all the contenders! The nominations for the 95th Academy Awards will be announced on Tuesday, January 24, 2023