Why the VFX of ‘RRR’ are both outlandish and grounded in reality at the same time.

At one point during the making of director S. S. Rajamouli’s epic RRR, production visual effects supervisor Srinivas Mohan was overseeing a shot of the character Bheem (N. T. Rama Rao Jr.) leaping from the back of a truck, along with a range of CG animals–all in super slow-motion.

Part of the ‘Intermission Fight’ sequence, the incredible shot is seen in such slow-mo that the movement of the CG creatures was almost static, which is the way it would look for real at that speed.

“We actually had to add extra jiggle to their muscles to get that moment to look correct,” says Mohan. “In fact, this entire film is full of surrealistic hyper physics like that. Actual physics won’t work cinematically, so we have to exaggerate those moments and things sometimes.”

Indeed, this slight bending of real-world physics–which also becomes apparent in some of the incredible leaps and bounds and escapes and (almost) super-powers of the main characters, Bheem and Raju (Ram Charan)–is a large part of the film’s charm.

Another slow-motion Intermission Fight shot features a leaping tiger and a leaping Raju and more physics bending. When shooting it’s difficult to get the correct framing for fast-moving digital objects; one would need to animate within the given frame despite rigorous previz, so “to ensure everyone on set knew this was a slow-mo hyperreal scene,” as Mohan observes, “we calculated and pre-programmed a visualisation with an in-camera LED strip.”

“From the previs calculations, we produced a spreadsheet that showed how fast they would be moving,” continues Mohan. “We then designed a small program to play the light movement on the strip placed within frame when the director called action. That way, everybody knew where the leap was happening; the talent could react and, most importantly for us, camera could follow accurately. The director had mentioned to us, ‘I want to make everything clear.’ So, I designed it in such a way that all the animation would be right in terms of what we shot on set.”

Another example of where pre-planning occurred to ensure the shot ‘looked right’ was the train wreck sequence. Here, Bheem and Raju unite to save a boy from a crashing train, after they make spectacular leaps on and around the bridge. Ultimately the action in that bridge sequence came about via real stunts, special effects and plenty of visual effects for the bridge environment and the train (mostly a large-scale miniature) produced by Daniel French and his team at Surpreeze.

“Even here,” notes Mohan and French, “the distances, heights and everything even down to the length of the ropes so they would touch the water are physics-based that we calculated and are based on what we designed early, so that it looks authentic.”

“Although it’s surrealistic, the director is always using the emotion in the background, the idea that if you push a human to maximum, actually his power is totally different. If you are being chased and have to jump 20 feet, normally you cannot. But if you have that emotion, then you might be capable of jumping. The director always supports that emotion can allow us to do exaggerated things.” 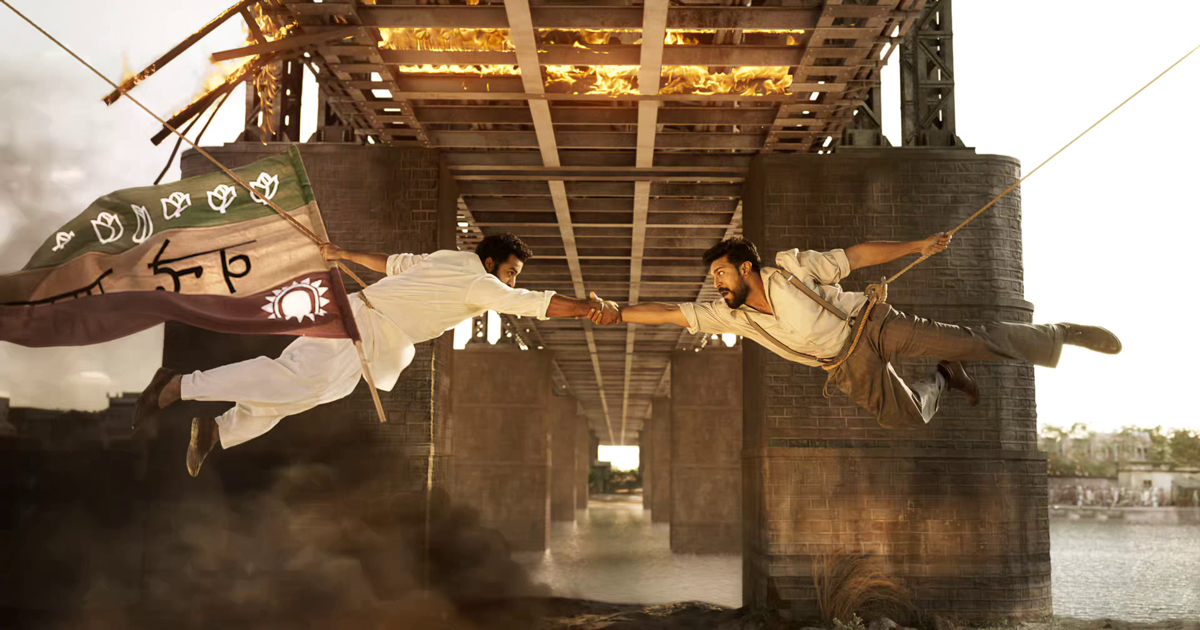 Exaggerated things may occur in the frame, but there remained an effort during the making of RRR to always ground the action in reality. Large on-set locations were relied upon, for instance. In fact, one enormous set build took place that enabled the shooting of multiple street locations and areas (partly to keep hordes of admiring fans at bay and partly to give a sense of scale to the scenes). Then, in visual effects, a key effort was made to preserve the real plates.

“One thing that we always tend to do is to work on what we call master shots,” details visual effects supervisor Peter Draper, who at Makuta VFX oversaw many of the film’s biggest VFX sequences. “These master shots are key angles where we are showcasing topography, the arrangement and placement of certain key hero elements like [in Ram’s introduction scene] where the watch tower is, where the rock face is, where the police station is. So, if we understand that and the artists understand that, the audience will understand it as well.” 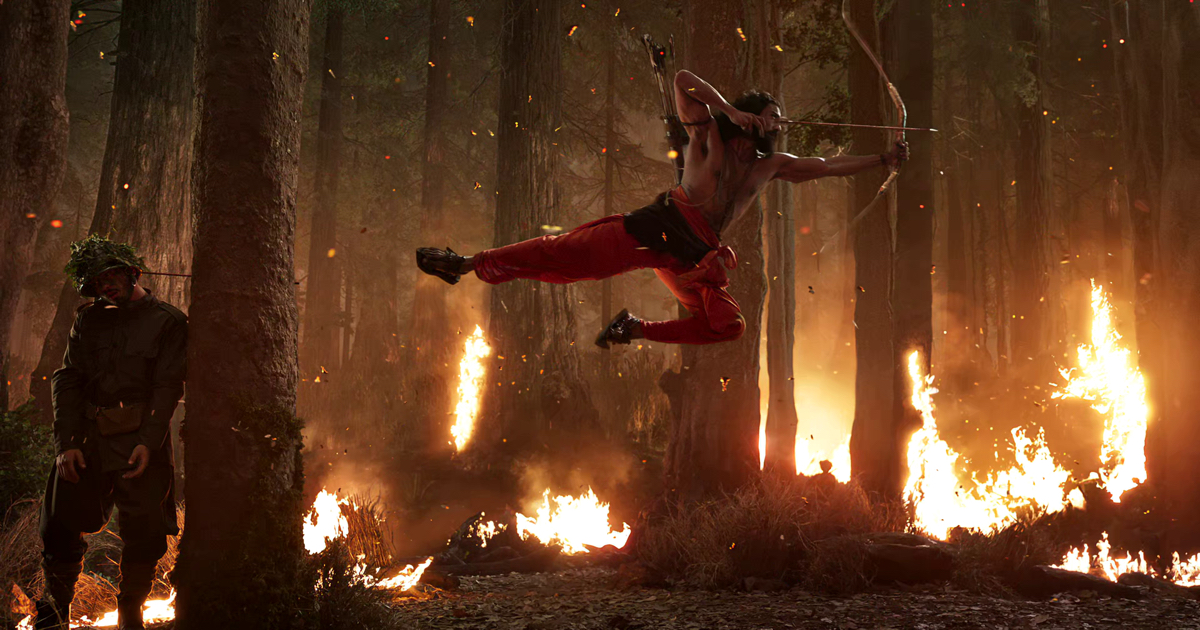 The film’s climax–a fiery forest showdown between Bheem and Raju versus many, many soldiers–is again somewhat of a heightened reality moment. But also, again, the shooting of the sequence began with as many practical elements as possible to emulate fire.

“We had a clever trick with the fire,” says Mohan. “We used some square gas pipes, which create a lot of patterns, and then we cover that with huge amounts of thick white smoke. So when the shot is happening, white smoke comes in immediately and covers that. What you see from outside is that the white smoke is glowing from the inside. It gives the illusion that a huge fire is there, in the background. You won’t be seeing actual fire but you see that illumination and everything.”

Makuta VFX was responsible for taking plates of the dramatic action in that climax, mostly shot in a bluescreen-lined studio, and filling out backgrounds, and adding in more fire and smoke. “The fire was primarily all FumeFX in 3ds Max,” outlines Draper. “The background was Unreal. The fire and smoke was Max, done in FumeFX, with some embers done in Max. The rest was Blender, with embers done in Blender and foreground trees in Blender.”

One key moment in the scene once more highlighted the surreal nature of the action, and where VFX were called upon to help. This was the bike kick and catch orchestrated by Bheem.

“There was research done into what type of bike was actually there,” says Draper. “Could he actually lift this? It was one of those what they call penny bikes which are around 50 kilograms. So they were designed to be relatively light. So, I mean, could he kick it? I don’t know. He certainly could have tried to.”

“The challenge there,” concludes Mohan, “is that there is a very thin line between surrealistic physics and real physics–we may have crossed that line on the catching and throwing of the bike in the climax–but as a story point, it really worked out.”