Proof explains the previs process on the film.

Pawl Fulker was Proof’s previsualization supervisor for No Time To Die, a film not short on high-action, and one in which practical stunts were favored as much as possible. Proof came in early to help plan out stunt and visual effects sequences, like the Matera chase or the sinking trawler, as well as many other scenes.

Here, Fulker explains, for befores & afters, how technologies and techniques such as getting stunt performers to don mocap suits for previs, or to use accelerometers in the cars for the Norway vehicle chase, ultimately aided in the viz process.

b&a: Where did you start with the previs for No Time To Die?

Pawl Fulker: The first task we did at Proof was about building a rig to get the DB5 through the city. Those shots didn’t happen in the end, although we built a load of options and Chris Corbould built a load of rigs, and we tested it. But we did do some other previs shots with Chris with the car. At the same time Olivier Schneider, who was the stunt coordinator, he was given the job of coming up with some stunt pieces involving the car and the guys that surround the car for the donut, but also the section on the bridge where Bond jumps off.

I’m very keen on involving the stunt team as much as I can with the fighting shots, the close action shots and all of that, with our previs. I really try to make sure that they’re embedded in our process, and the way we normally do that is by asking them if they want to get in the mocap suit and do some stunts for us. We say, ‘We’ve got this bit of action and we need a fight. Have you got 10 minutes where you could put the suit on and hit each other?’ They usually say, ‘Yes’, because those guys love hitting each other. 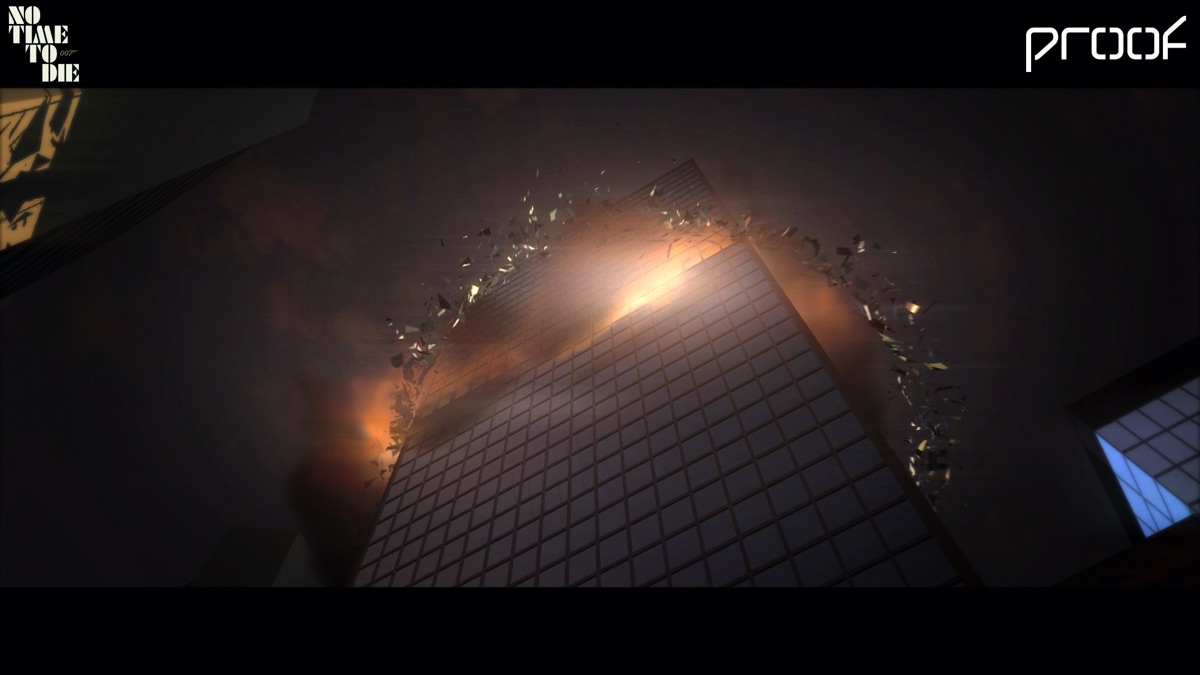 I’d been speaking to Olivier about getting JC (Jean-Charles Rousseau), who is Daniel Craig’s stunt double, to do a couple of moves for us, just so our previs was moving like Daniel might move. Because, JC knows his gait and he knows his speed of run. So I thought, let’s get that stuff right. Myself and Olivier and Charlie Noble (the production visual effects supervisor) started talking about how he was going to film this stuntvis in the studio. They set up this great big bit of scaff, not as high as the bridge, but really bloomin’ high, to throw each other off and do some fighting.

The first section we did was the car chasing after Bond. So JC ran and jumped and dived. Then he ran over and we got him to jump off the trellis and we filmed it as well as mocap’ing it. There were a couple other bits of some tumbles over some roofs. Then we also did the same for the guys in the donut. So we had the Matera square and we positioned some cars there; basically we’d just tape out on the floor in the studio and do a little run through. What it means is, Cary Fukunaga, the director, instead of having a fight in amongst some cardboard boxes and polystyrene, he’s got something in situ, since it’s virtual, where he can then say, ‘What does it look from this helicopter shot up here, or what does it look like down here?’

The DOP Linus Sandgren would come and do shot compositions for me. So it was a really nice collaborative process of us starting off just shooting things with Olivier with the stunt guys. Then we work with Charlie and Linus to develop some cameras. And also Mark Tidesley, the production designer. It ended up, particularly for those sections, pretty close in the film.

b&a: It’s a really interesting previs in a way–although there are of course a lot of visual effects and there are CG cars in that sequence–the previs was mostly for the live-action photography, wasn’t it? Not for working out a heavy-CG sequence.

Paul Fulker: Exactly, it was mainly for the photography. I mean, some of the stuff when you’re shooting off of that bridge is not there obviously. There it’s been augmented and bits have been taken from another village and stuck in.

b&a: There’s a lot of driving stunts around Matera. Is there a particular way that Proof is handling driving rigs in previs?

Paul Fulker: We did use a tiny, tiny bit of Craft Director Studio, which is a Maya plugin. We’ve done a lot of car jobs because we do all the Fast and the Furious pictures. So we’ve got a quite advanced car rig. We’ve got just tonnes and tonnes and tonnes of cars rigged the same way. With Craft, you can use the car rig as it is, where you’ve got wheels and a body and then you can put a ground plane in there. You can drive it with a joy pad. But then what you can do is you can animate the car and then you get all the wheel spins and the suspension for ‘free’. 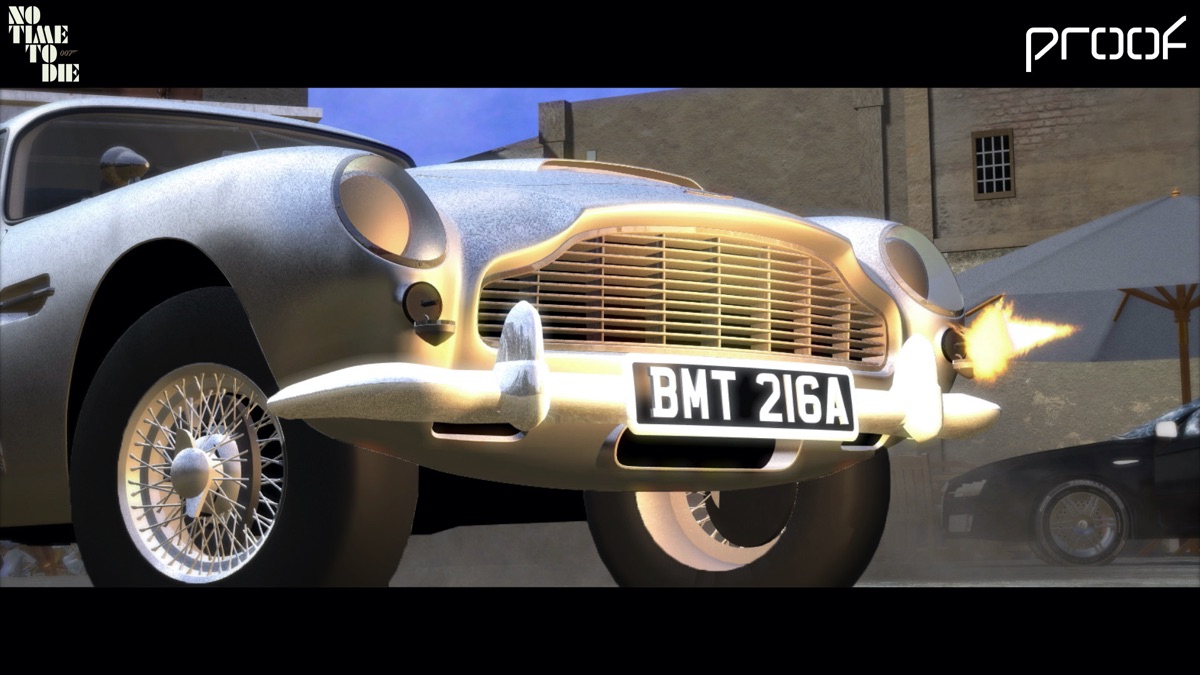 It’s not massively controllable. You couldn’t do a donut in it for instance, but you could do a skid to stop and it might save you a bit of time. We stored some of those moves, like stopping and breaking. We’ve got them installed in, via Studio Library in Maya, which is a way of storing animation. And then, of course, so much of our driving is all animated by hand by the team at Proof.

b&a: The opening ice fall is a really nicely crafted sequence. How did that sequence look in previs from your point of view?

Paul Fulker: Previs’ing that really helped everyone understand the space when they went to Norway to film it and what they might look like and where they were going to have to build it. They built the house there, so before they got it there the previs was about giving them an idea of how it would look in the surrounds. Again, it was about us getting someone in a suit and just walking along and doing a bit of mocap. 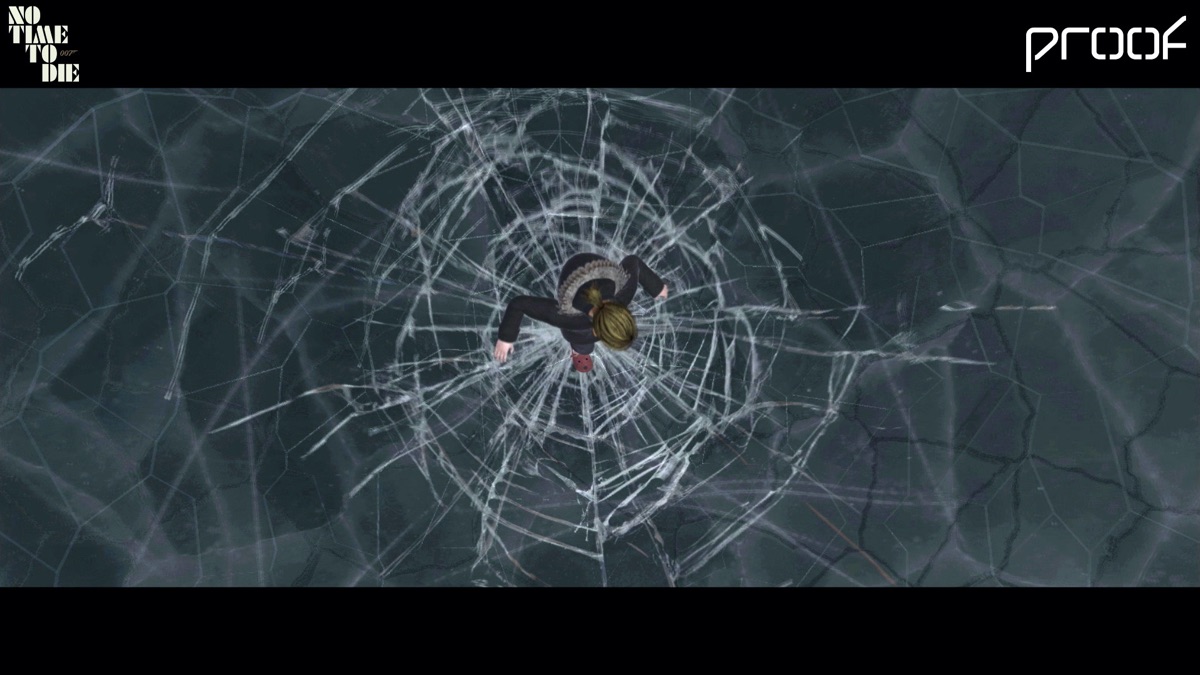 That sequence kind of lived in the cut for a while because of the shoot they needed to do under the ice. I remember seeing an early version of that sequence. We got shown it in the screening room and there was still quite a lot of previs in there. We were also making new previs to make that cut work. Just so the studio and crew could watch it and it flowed.

b&a: What about the lab infiltration? I thought the lift well sequence with the magnets was a big surprise. What are the very particular challenges for quite a dynamic sequence like that?

Paul Fulker: First of all, it was an exercise in getting the guys walking down the building and just kind of messing with people’s heads about whether they’re walking down and what the reflection meant and whether they were going down, or across, or otherwise. Then you get to the window and you flip the camera back up. 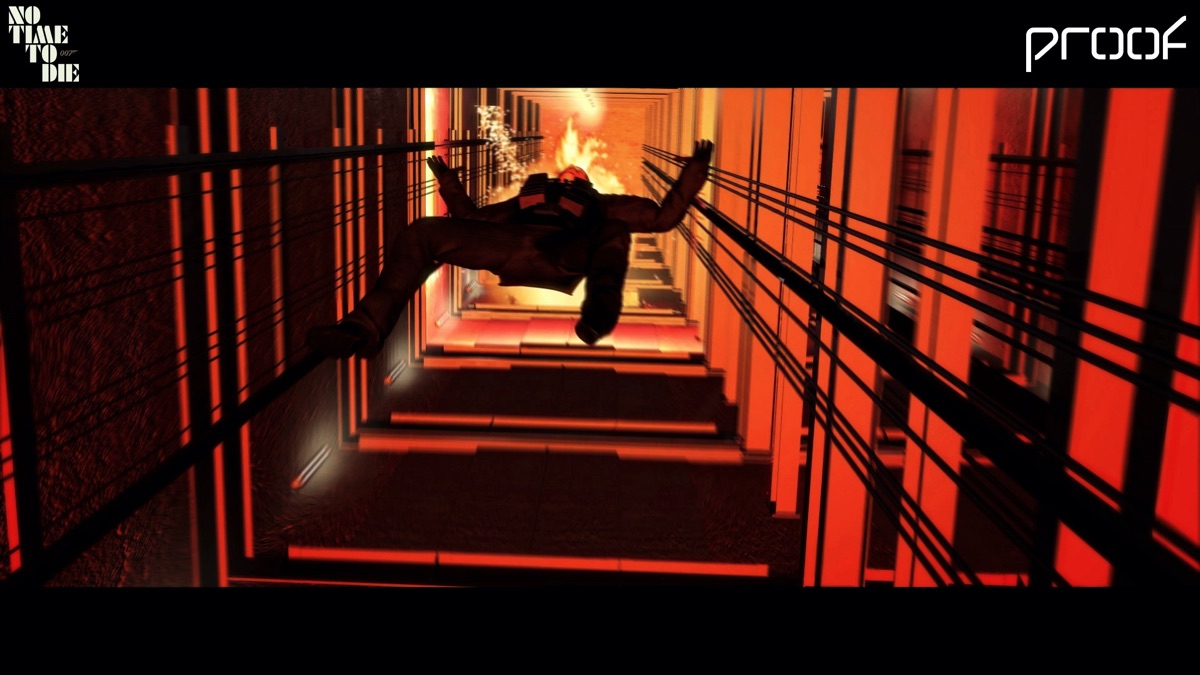 For some of these shots, we rendered them properly in Maya, because we wanted to know, if we put this building here in London, what would this reflection look like? Cary had this very nice image in his mind of a very symmetrical image. Then we said to him, ‘Cary, you’re going to have to cheat the reflection to make that, and this is why…’. It was about just showing them the whys and wherefores of the actual physics of how the reflection would work when they’re walking down the building.

b&a: Let’s talk about the Cuba scenes, particularly with the plane and the boat. What I liked about the previs work here is that it seems again to be about composition of water, ships and actors.

Paul Fulker: Definitely, yeah, it was. There was an element of effects stuff, too, because obviously there’s explosions. Chris needed to work those out. But yeah, there was an awful lot of compositional stuff worked out in previs as well, which I love doing. I love doing the cameras, it’s really good fun.

b&a: When you were staging the sinking scene in previs, how much do you have to take into consideration what Chris can build, or what a tank will hold?

Paul Fulker: We build the rig in Maya but we don’t do all the fluid dynamics because that would take forever. We just use a basic level of water and then rotations to show Chris and the art department. We go, ‘When you drop it down that far and bring the water up that far, this is what you’re going to get.’ It’s not particularly exciting to see on the screen as previs, but it is about working out the shots and keeping the actors safe.

b&a: How did you tackle the Land Rover chase in Norway previs?

Paul Fulker: One of the interesting things there was, we had an accelerometer device that went in the actual cars. So, when they shot the Land Rovers for real in Scotland, which doubled as Norway, we then got a load of data back. It was rotational data and we helped SFX put that onto a gimbal rig, so when they did the interiors the car was moving exactly right. I found that incredibly exciting to see, to get this footage back. We just put it in Maya and got this motion going. It’s like, oh my goodness, this actually really does work. We have got an exact motion of the car and it’s really, really accurate. 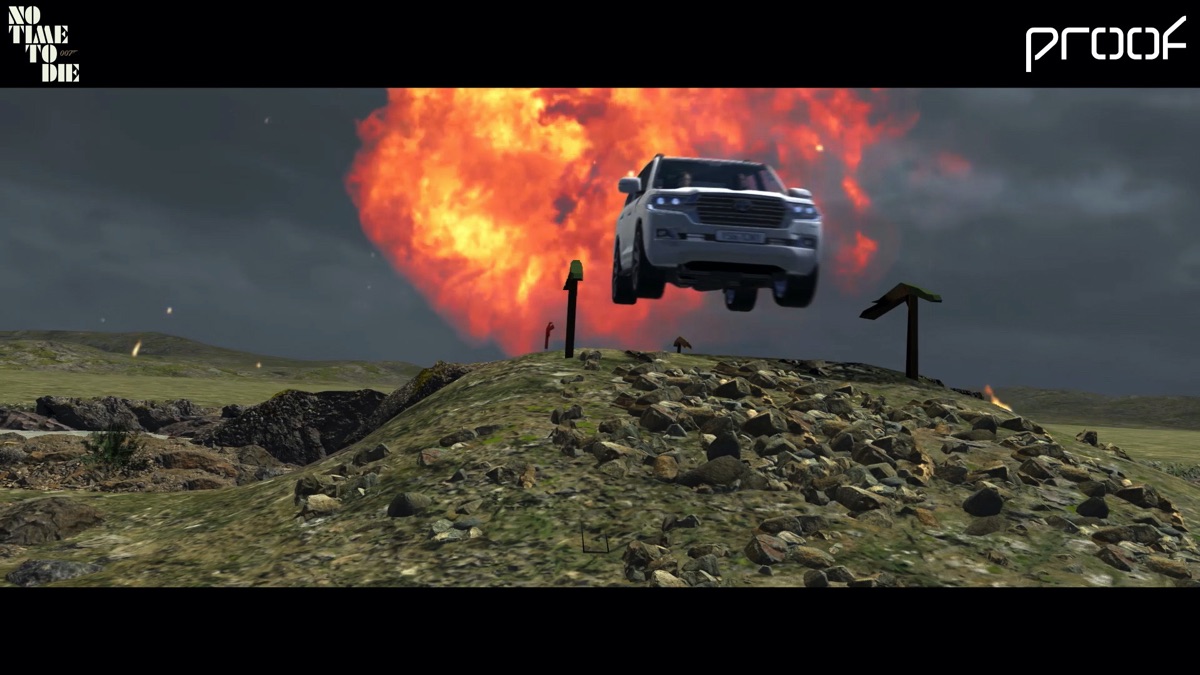 b&a: Then there’s the glider. How was that sequence–which did involve a lot more CG–previsualized?

Paul Fulker: We tried to treat it like you were on another plane shooting them when they take off. There was an element of finding the subject in the frame and the same when they’re flying through. We didn’t make them these perfect smooth shots following the plane. Not like it’s found footage, but it’s like the plane’s doing what it’s doing, and we’re trying to catch it with the camera. 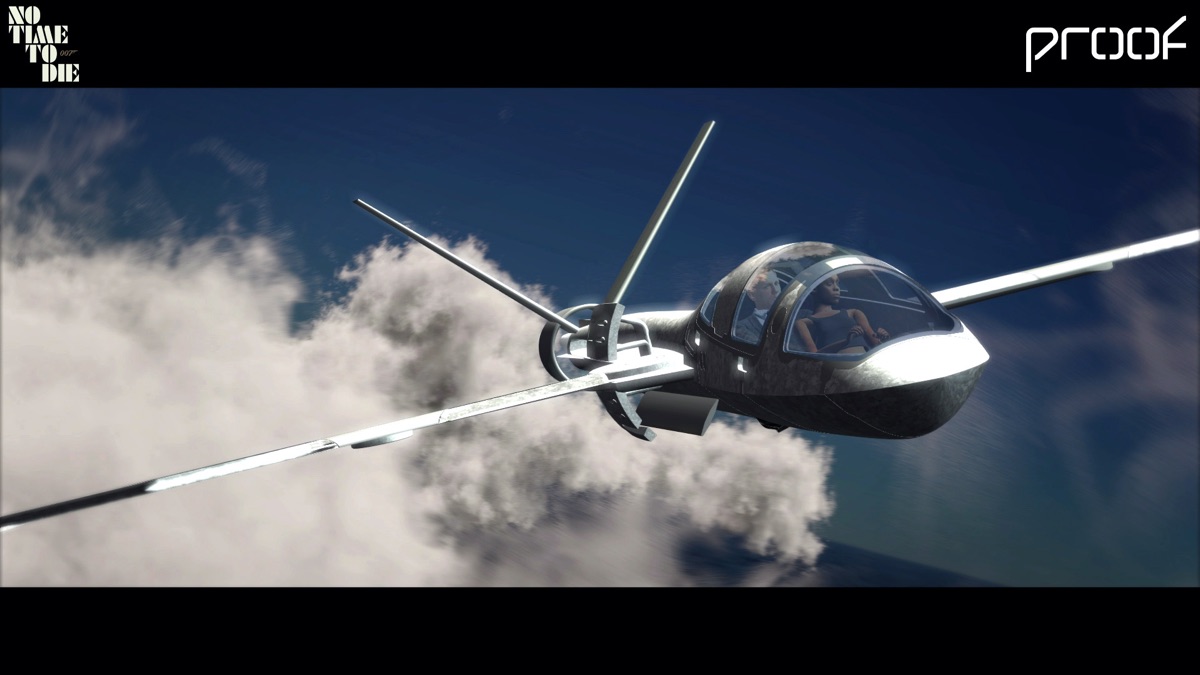 Cary showed us a few shots from a couple of films he liked for the high shots looking down, as the plane goes over the water. Say, the lovely one from Dunkirk.

Then for the glider itself, we wanted to make sure it felt like that thing could actually do that. So we tried a couple of different configurations of wings until we got to one that felt like, as something’s dropping that it’s working with the environment, working with gravity, and working with everything. That the wings open. It’s a natural thing that they open. Like a seed pod or something dropping from the sky and then something opens.