FuseFX reveals the secrets of these visual effects for the show.

In the latest Loki coverage at befores & afters, visual effects supervisor Wayne England of FuseFX explains how his studio handled some particular VFX work in the TV, including time doors, time turning and the pruning effect.

b&a: The time doors had a very particular look, and in the making of documentary, I was reminded that they look inspired by the shields from Dune. Can you tell me a little bit about them?

Wayne England: For the time doors, we initially received a Nuke file from a collaborating vendor with associated renderings depicting the fundamental characteristics of the effect. Our own developed systems were initiated from this reference in alignment with detailed conversations with Marvel about the qualities of the effect they were hoping to realize. Our work was rooted in defining subtle, nuanced details associated with all the time doors dynamic, interactive looks and motions. This included edge motion highlights, applying texture maps for subtle TVA utility characteristics, 3D rendered volume refraction effects and reflections. Special attention was given to the opening and closing of the device with chromatic aberration effects associated with its initial emergence, and it’s prominent illuminated reflective interaction with its environment. Special emphasis was also given to the moments people moved through the time door threshold, with their echoing forwards and backwards in time, in addition to the edge effects given to the volumes of people passing through the time door threshold. 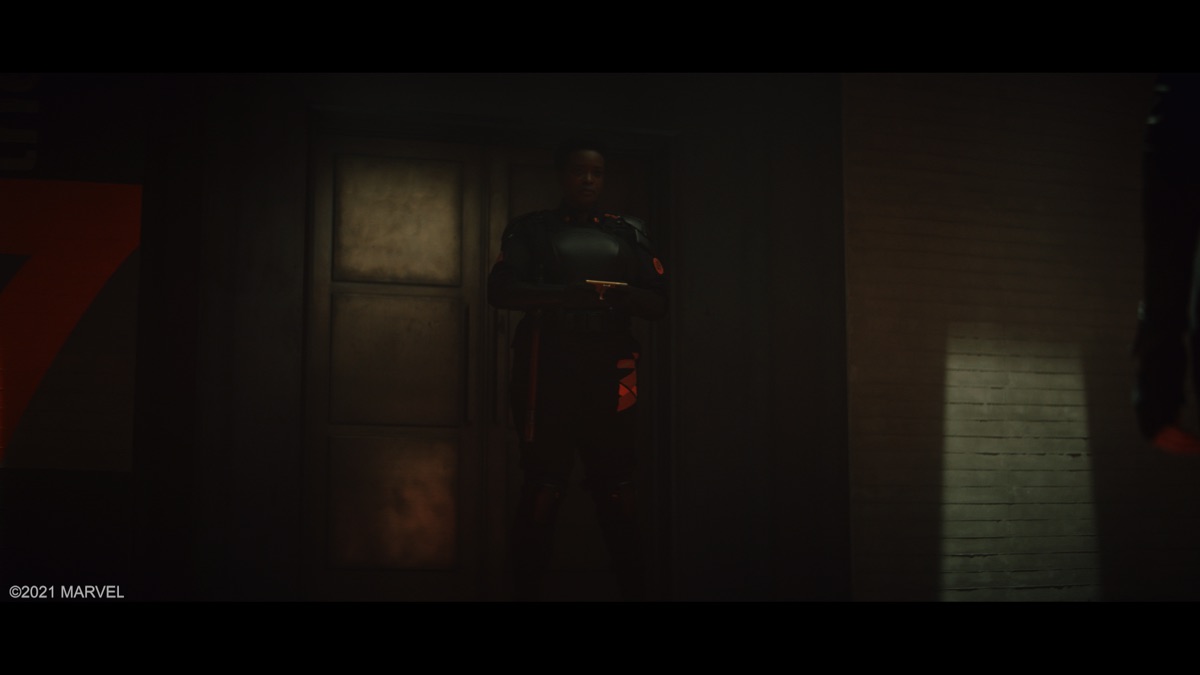 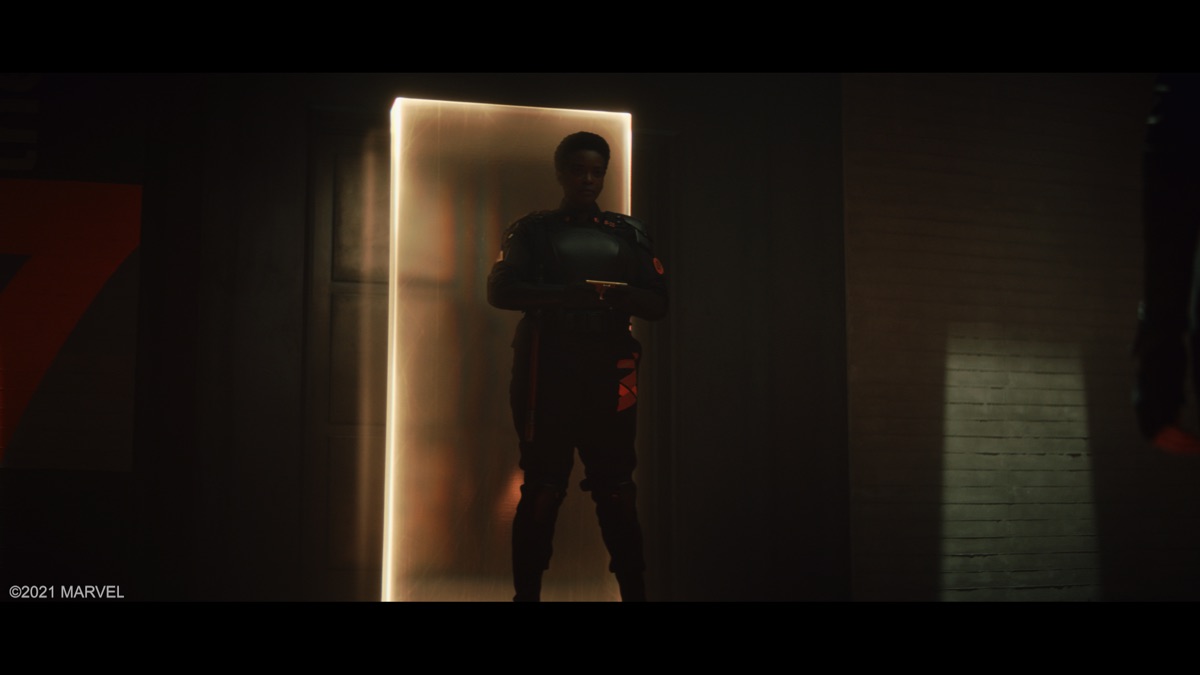 Questions such as how the time doors reflect on the floor and what does the person look like once initially passed through the threshold, were each explored through a refined developmental process. It should also be said that the time doors’ development was a collaborative process that saw several iterations evolve with 2 other studios also contributing to the evolution of the look. It was good to learn along the way, our development represented some very key advances for their final look and action. Kevin Yuille, our digital effects supervisor, brilliantly oversaw the hands-on development of our time door contributions.

b&a: What about that time turner device, which was used to push people forward and back in time, what was the methodology they used on set generally to film those? And then how did you take plates and create the effect?

Wayne England: The source plates we received had both the actors moving through the space with their performances and also, a clean plate version of the shots with no actor. So our task for say, when B-15 was caught in the time loop with Mobius manipulating her with the temp-pad, was to make visible only key moments of her performance, which was the establishing of the effects’ fundamental timings. Then to those select moments, we applied in very nuanced ways, animated edge falloffs, distortions, subtle blurs, chromatic aberrations, and displacements which collectively, combined to create an overall look that felt both dimensional and quite beautiful. The effect was all developed within Nuke, without any need for 3D. 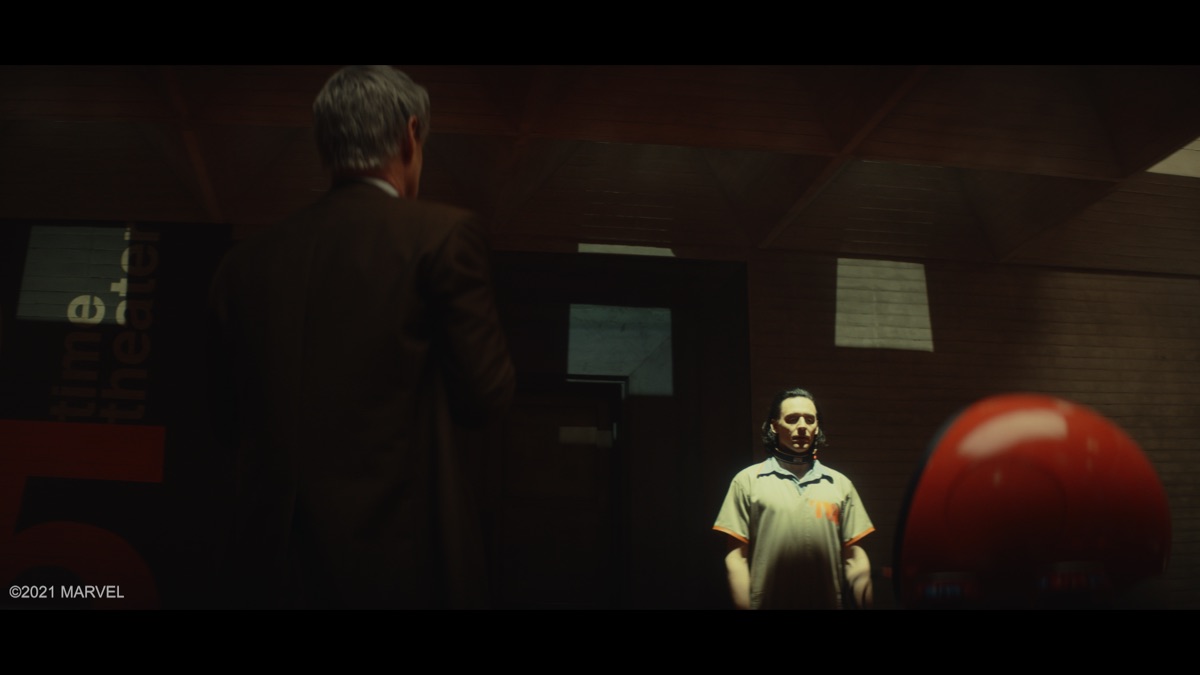 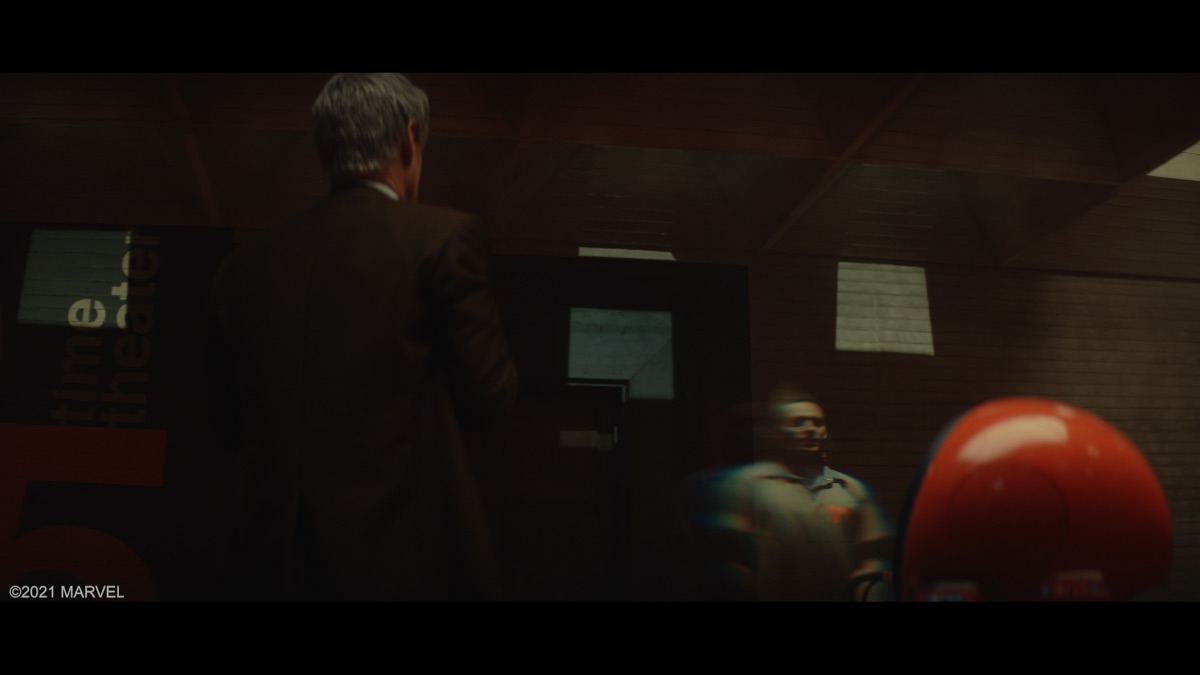 b&a: How did you handle the time stage theater?

Wayne England: The time stage theatre’s holographic projections were associated with a physical projector device (beneath the space of the holographic volume). As reference for the projector, we received concept art and schematics to help further our understanding of its implied functionality. These understandings were also linked to an overall theme for the functionality of the holographic projections, that it should move with characteristics similar to the phenomenon of murmuration. For this, we studied the murmuration of starlings in flight and schools of fish, to go deep in our understanding of the phenomena at a granular level, with the coordinated flows of propagating translations and rotations.

As we evolved our Houdini based particle system, our lead FX artist Ashkan Azarmi, went so far as to code the functionality of quaternion mathematics into the displacements and rotations, to allow for complex volumetric target shapes to still be arrived at, in smooth flowing murmuration. It is an impressive overall system which has two primary states. Its default projection state was projecting a sheet of small component illuminated elements, rather like a crystalline curtain, shifting and rotating in slow murmuration. From this state, the hologram could also move into representing more complex 3D formations and image projections. An example is when Loki and Morpheus walked into the Time Stage Theater for the first time, the default state hologram transitioned into the shape of the TVA logo, via the component pieces converging, appearing to make a solid 3D form, which in turn, transitioned into “projecting” the finished look of the logo. 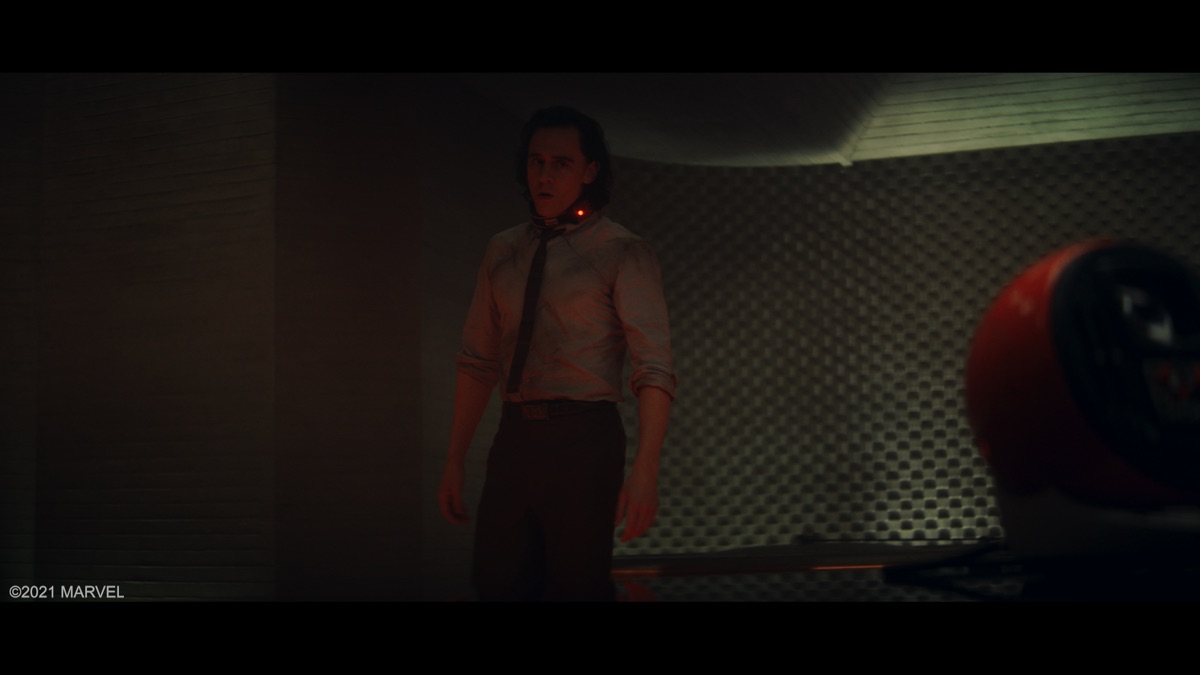 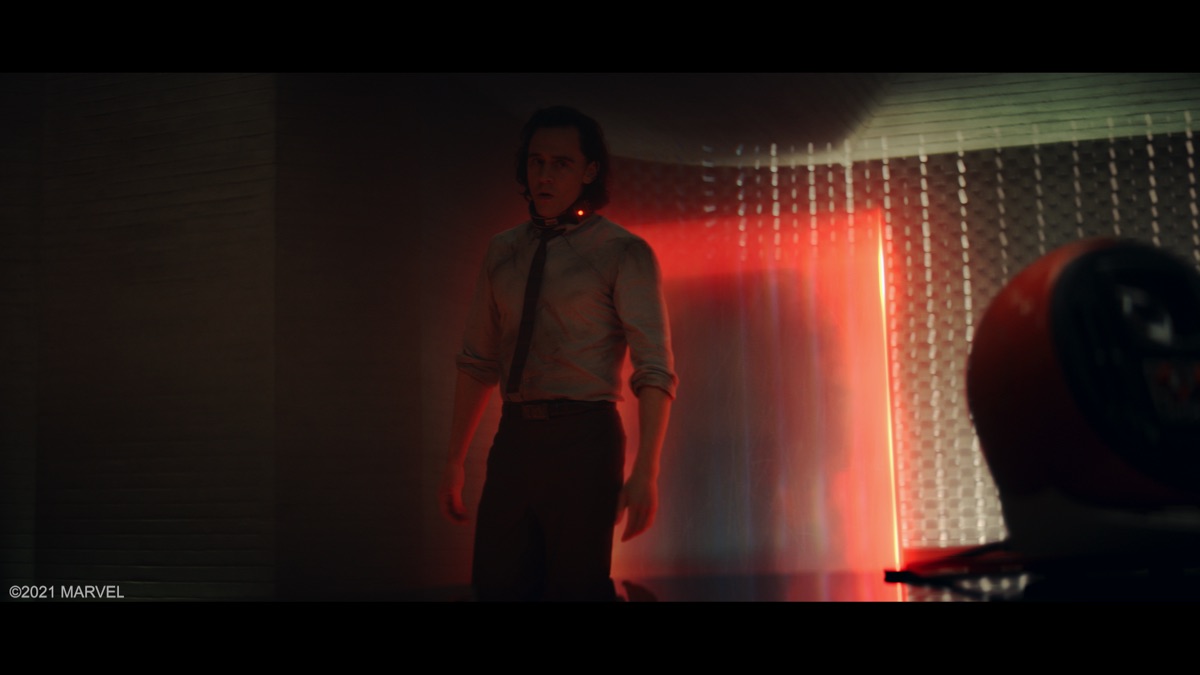 b&a: Can we discuss pruning? How was that achieved by Fuse FX?

Wayne England: This was an especially enjoyable part of the project, since conceptually, it was really a beautiful concept to dive into. Tasked with evolving the look and motion of the pruning effect, we made use of 3 still images from the pivotal moment of Mobius’s pruning, to initiate the first phase of development, which was to arrive at the overall appearance of the effect through concept art.

After conversations shared with Marvel, it was a series of insights that followed that led us to gathering references of interstellar phenomena, depicting powerful currents of energy leaving transformed states of energy in its wake. So we were aiming for the energy of the white hot leading edge, to appear to transition into subtle, spectral nebula-like colors, suggestive of the light-energetic qualities of a human body, teleported through this incredible, dimensional light-time-energy technology of the TVA. Once conceptually represented in our concept art and with approval given, we moved on to the next phase of putting it all in motion.

Developed in Houdini, the effect was fundamentally a propagating volumetric reveal matte, passing through and over the volume of Mobius’s form at the time of the pruning. Utilizing a scan of Owen Wilson, we positioned his scan to take the form of Mobius’s posture. It was from the hot leading edge of the energy’s propagation, that our lead Houdini artist Seung Kim, evolved all the other component elements of the effect, in addition to specialized AOV’s that comp would utilize in such significant ways.

Our Nuke compositing role for the overall pruning effect was especially important in taking the various 3D elements into the realms of the effects’ final approved look. This effect system, like our time stage theater systems, our time turner effect, and component time door effects, were all requested to be shared with our fellow vendor studios.

What an honor to collaborate with Marvel Studios and to have made the journey with all fellow FuseFX Loki team.