Behind the scenes of Proof’s previs, techvis and postvis.

The elaborate stunts and visual effects in Justin Lin’s F9 were helped made possible for an extensive visualization effort by Proof, which crafted previs, techvis and postvis for the film.

b&a: Can you give me a few overall details of the previs for F9?

George Antzoulides: Previs alone covered six sequences totaling over 3,000 individual shots ranging from Southern California to Scotland, Eastern Europe, and beyond. 83 weeks straight of Previs/Postvis in the US and UK. Plus 14 weeks of Final/Postvis. For this film, no game engines or custom mocap were used. It was all done by hand in Maya. Proof London did a destruction simulation for the Tbilisi building collapse.

Dave Allen: Our previs for The Fate of the Furious was toon-shaded, but we used a more realistic rendering style on F9, and we achieved a much closer likeness with our character models.

b&a: Given there is so much ‘driving’ in the film, is there anything special you’re doing in previs to use a driving rig or simulate driving scenes?

George Antzoulides: All the driving animation was done by hand using the Proof Mobile (Proof’s proprietary vehicle rig) and their RTmotionpath rig.

Dave Allen: Our motion path tool (the RT motion path tool is a proprietary tool created by our senior visualization supervisor Ranko Tadic) has many features not found in the standard Maya one. It allows us to create and adjust paths for the vehicles to follow while controlling their speed and secondary motion separately. It also has settings that account for the length of the car and whether it is divided into segments like the Armadillo truck, so that the entire vehicle is oriented correctly and doesn’t unintentionally fishtail outward while going around turns.

Dafydd Morris: Early on in London, we tried looking at a plugin that would allow us to simulate realistic car motion using dynamics. We did get some great results but overall we found the level of control you get with hand animating outweighed the benefits of using the plugin.

b&a: For the jungle chase in particular, can you discuss the particular challenges here of choreographing the previs? How did you deal with moments of explosions and crashes, especially in a previs way so that it was fast and efficient, but also told the story?

George Antzoulides: Getting the physics right as the Armadillo’s front wheels lock up causing it to flip over onto its back, slide downhill, have Dom jump from a moving vehicle to the top of the runaway Armadillo, surfing it like Laird Hamilton when it smashes thru a building causing it to rotate 180 degrees, then motivate the behemoth machine into a lateral corkscrew tumble over a cliffside edge as Dom jumps into the caboose making his way across the giant rotisserie all the way to the driver’s seat so he can muscle the steering wheel just in time to stick the landing as the wheels touch down on the cliffside road below was bananas!

It was especially challenging as this sequence was originally previs’d to take place in the jungle and was later adapted to accommodate the city streets of Tbilisi, Georgia where principal photography took place after production decided shooting all this in the jungle would be near impossible. Typically when a location change like this occurs we end up scrapping everything and starting over. Fortunately, the original jungle previs for this sequence was executed so well we were able to retrofit much of it to the new environments. It wasn’t easy, but we didn’t have to start from scratch, allowing us some extra time to really dial in the coverage in order to maintain continuity across all the beats and make the action easier to follow.

One of the biggest challenges of designing the previs for the Jungle sequences was the environment itself. Normally in previs we will be given a set designed by the art department or a location the director has picked and we will design the action around that. For the Jungle sequence, we had to design environments that would work with the action the director had in mind. The locations department and VFX supervisor then worked together to find locations that would work with our previs or could be used to shoot plates to build CG environments that matched our previs. With regards to the explosions and crashes, we keep everything very simple in Previs. We try to find the simplest way to represent these effects that clearly show the director’s intention.

b&a: Can you break down the magnet shot where the car goes through the shop window – how was that visualized?

Dafydd Morris: I think we worked up a few different versions to show Justin. We started by looking at different shape buildings the car could be smashed through. There was an early version where the road forked off and we had the car being pulled through a kind of triangular building. The idea that was settled on was the one you see in the film. Once we had visualized how the stunt was going to happen we looked at lots of different ways of filming it.

b&a: Can you outline a sequence that Proof worked on where you needed to provide, in particular, detailed techvis? What did this involve in terms of visualizing the scene, what kinds of technical aspects (cameras, sets, movement, etc) were involved, and what did you ultimately deliver to production for this techvis?

George Antzoulides: We provided extensive techvis for the rope swing beat of the jungle sequence to assist the aerial plate shoot. As well as providing all the usual information such as focal length, tilt, pan and roll we also provided data on the helicopter speed, altitude, and path to achieve the same shots we had designed in Previs.

b&a: What did postvis involve, specifically? Can you talk about taking a bluescreen plate, for instance, and realizing environments or extra cars/action for editorial purposes?

George Antzoulides: Postvis on F9 was challenging, for sure, but having Proof’s All-Star Postvis team in the trenches every day made it a fun and rewarding experience. In terms of composting, each plate required extensive camera & object tracking, rotoscoping, paint-outs & color corrections on all the render passes. The tracks would go to the Maya artists who were tasked with adding CG vehicles, digital set extensions, destruction sims, and effects. In terms of animation, each sequence posed its own challenges, but one thing remained constant, the high bar set by the client.

Proof was tasked with capturing the real-world physics of every animated object in every shot we touched. We had to deliver highly polished animation within the constraints of a postvis budget and schedule. Needless to say, extensive revisions needed to be made quickly in order to achieve this level of animation and still meet our deadlines. In the end, I think our efforts really paid off. Seeing how close our postvis work matches the finaled shots on the big screen is the ultimate compliment.

David Allen: The Edinburgh shot of Jakob on a zip line being tackled through a window by Dom was an especially tricky one, because not only did we have to combine bluescreen shots of the performers with multiple location plates of the environment, but the perspective and timing needed a lot of adjustment to line up correctly. We recreated the shot in Maya and then projected the footage onto renders of our 3D assets. Jakob’s zip line was also a CG asset, and we added a tower in the background for it to be attached to. Our compositing supervisor Randall Cormier deserves the credit for figuring out how to make that shot work. 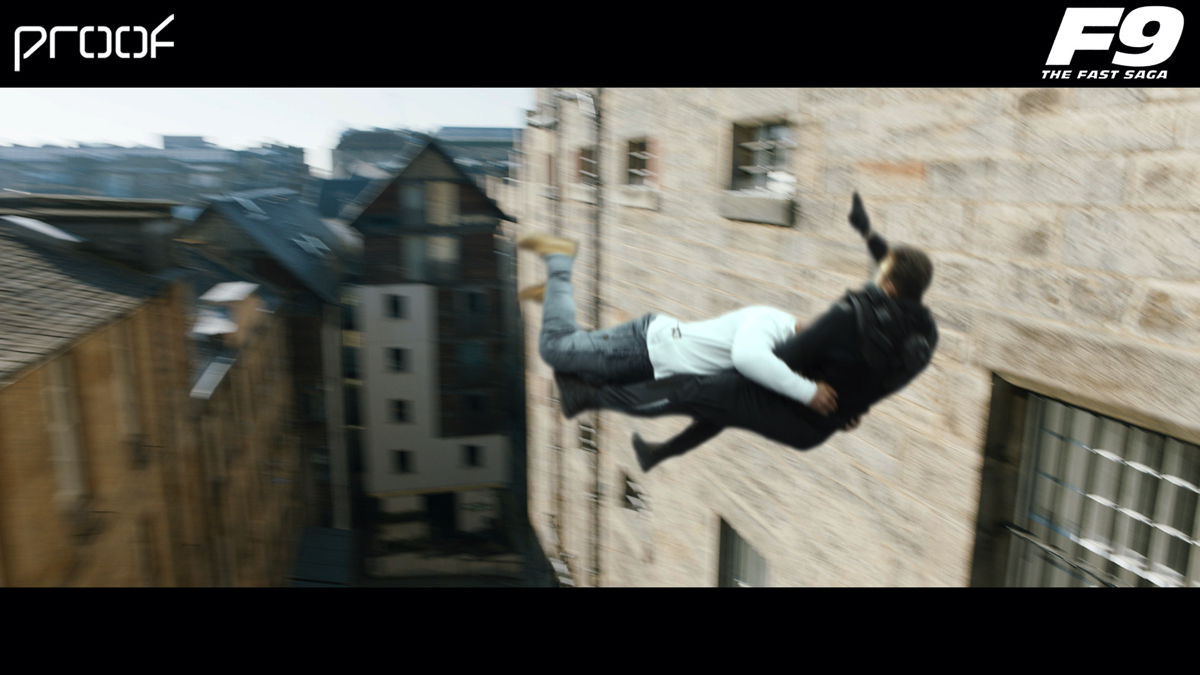