The team from Rodeo FX explain why.

A centerpiece action scene in The Falcon and the Winter Soldier sees our heroes take on the Flag Smashers atop two moving trucks in Germany. Originally, a camera array plate shoot filmed in Atlanta was going to serve as backgrounds for the action (with foreground fighting scenes predominantly taking place on a separate bluescreen shoot). But it was soon realized that a more elaborate 3D environment would be required.

b&a: What were the early conversations you had with Marvel and with production VFX supervisor Eric Leven about this truck sequence?

Sébastien Francoeur: Well, at the start, that sequence was supposed to be a 2D environment. They shot camera arrays to fill the backgrounds, the environment, and all those arrays were shot in Atlanta. We were using the array, the environment of Atlanta, but when they had a screening, and they were looking at this, they said, ‘Well, that’s Atlanta. They’re supposed to be in Germany. Let’s upgrade with the trees from Germany, let’s put some alps or some mountains.’ 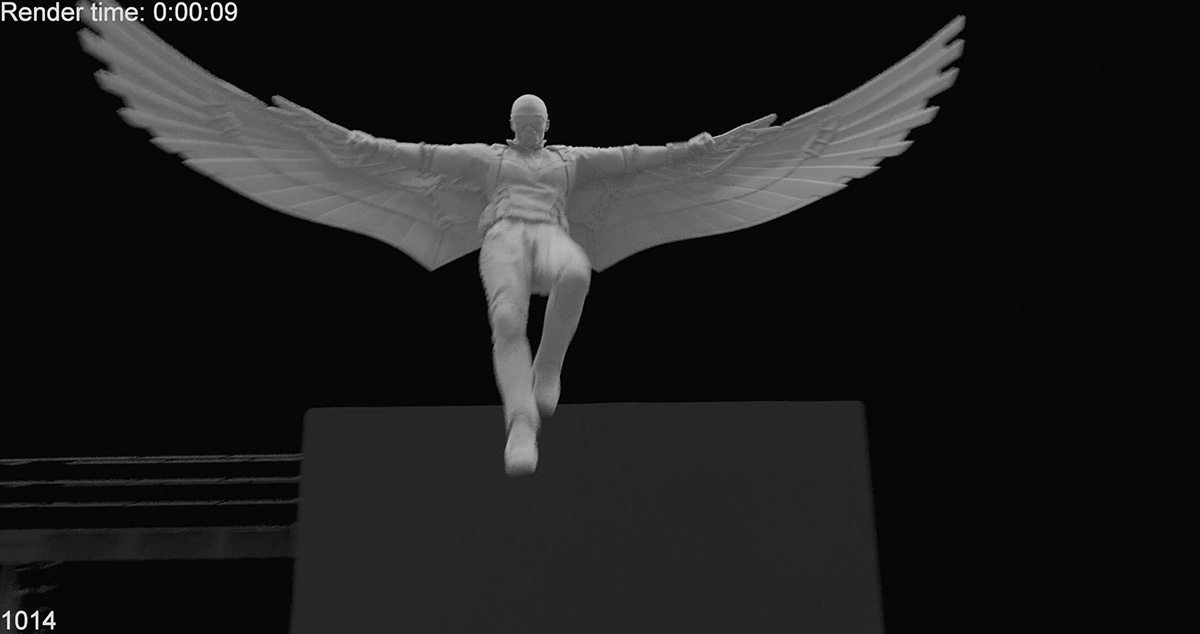 Graeme Marshall: It definitely evolved a lot from its first inception. What didn’t change was that Marvel spent a long time with the director Kari Skogland choreographing what the sequence needed to be and all the beats that needed to be sold in it. There’s that iconic shot of Bucky catching the shield. I think that was a moment that they had in the back of their minds for a long time. And that really wasn’t affected by our backgrounds, but it’s a point that they wanted to sell.

b&a: Because you had to create a new, bigger, wider 360 environment, what approach did you take to that? Were there any plates, or any opportunities to shoot anything in Germany?

Sébastien Francoeur: No. We used Google Maps and Google Earth reference pictures to see how the road looked over there. They’re quite different from our North American roads. At the end, we came up with that eight-kilometre long environment. We were also able to procedurally offset everything and that way we were able to maintain continuity as the sequence went along.

b&a: What was involved in your asset build?

Sébastien Francoeur: Lots of roads, lots of grass, flowers, dead trees. It’s quite constant at the beginning. It’s a small road, it’s not the Autobahn. At some point, it evolved a little bit more. We get past the mountains to the field of flowers. If you pay close attention, you see that those flowers start appearing a little bit earlier in the shot.

b&a: What tools did you use?

Sébastien Francoeur: We mainly used Clarisse for the scattering. But to add wind in the trees, a little motion, for that we used Houdini. We used some internal tools where the artists could scatter the trees and then go back into Houdini to just finalize the shots.

b&a: What sort of time did you have to complete this sequence?

Graeme Marshall: This was definitely the longest running sequence that we worked on. Like we said, it evolved from being location plates that they shot on an array for us to work with before it was re-concepted. COVID gave us a little bit of time and gave them a little bit of time to really dial in the sequence a little bit. And it involved a little bit more. And that’s where we went to this full environment build that Sébastien’s talking about. So it ran pretty much the length of production. Rodeo was on the show for probably 14 or 15 months, over 174 shots.

b&a: Can you talk about the CG characters or takeovers you had to do?

Sébastien Francoeur: In a few cases, it was a stunt performer who was doing the performance. So in those cases, we were sometimes replacing the head. Then, in a few cases, we needed to replace, or add, head, back, boots. And sometimes we would just slap the full CG double in there. Instead of just adding those three parts, we just erased the stunt double, do a roto-mation of the action. And we were using the CG double Bucky arm on every shot, I would say 95% of those shots. For Bucky’s arm, they did have a prosthetic asset, but it looks like rubber. You feel there’s a glove also. So instead of just doing patches, we just make that Bucky arm fully digital, and it worked perfectly. 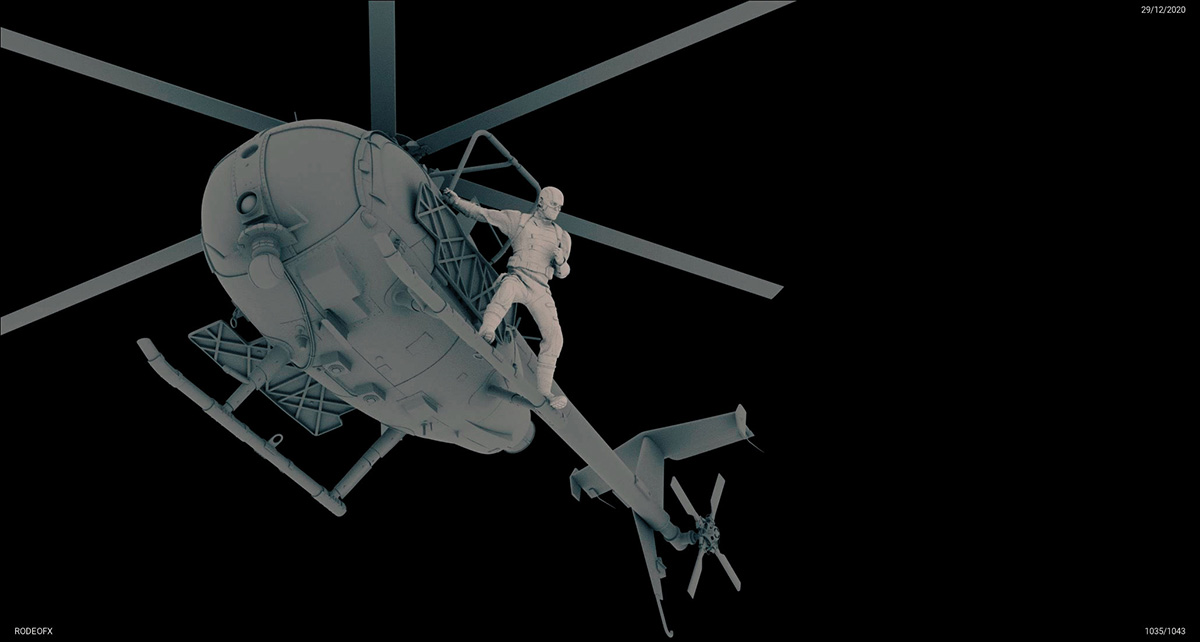 Graeme Marshall: I think you may be surprised at some of the shots that are actually digi-doubles and full CG replacement of the actors. I think COVID allowed us to really push our assets team to get these digi-doubles looking really, really fantastic. All the characters we have a digital version of–all of the Flag Smashers, Lamar, Bucky, Falcon, John Walker, all of them.

Sébastien Francoeur: There’s one shot, when you see a Falcon very close up, you would imagine that’s a bluescreen shoot. Of course, it was a bluescreen shot, but if we used that bluescreen shot it was too static and 2D, whereas everything else was in motion. So in those cases, what we were doing was starting with a roto-mation of the animation. And then we just kept, by the end, the face, to keep the performance. But the full body of Falcon was a digi-double.

b&a: One thing I’m interested in was that this action scene felt like it was shot with a particular shutter angle. For a visual effects studio, what challenges does that tend to bring in terms of the motion blur and completing the shots?

Sébastien Francoeur: It’s a bit of a visual signature with Marvel movies, using a low shutter like that. They’re also shooting at 48 frames per second. The challenges that come up when we’re dealing with that are on the animation level. Sometimes when an object goes fast, and you have a regular shutter, it’s kind of forgiving. But when you’re working with a high shutter, every frame, every position, the CFX, the clothing in the wind and that kind of stuff, it’s quite important, because you’re going to see it on every frame.

b&a: Is there anything else you wanted to mention about the sequence?

Graeme Marshall: I think when we talk about what we animated, I think some of our unsung heroes are also the trucks. I mean, both the trucks were characters in themselves. We had photoreal doubles of both of the trucks. It wasn’t a simple vehicle match move. A lot of the trucks shots, like the lead into the shot, where you see the trucks pull out of that warehouse area, that’s fully digital. That whole shot is digital. So we really had to give the trucks their own life, adding the suspension, the cabs, a little bit of roll to the trailers, all that kind of stuff. Just the attention to detail that Eric helped us get to really, really pushed us and really, really challenged us. And I think the result shows that we were able to get there and produce something really cool and something that Rodeo is really proud of.