The final episode of season 2 of Snowpiercer sees the character Josie (Katie McGuinness) breach the Aquarium car and separate the titular train. She does this by smashing the roof from atop the train—which happens to send ‘tendrils’ of ice into the aquarium, trapping sea creatures inside—which eventually causes the carriage to implode.

Production visual effects supervisor Geoff Scott explains how this sequence was made, including the VFX work by Image Engine for the train, environments and aquarium shots. Scott actually pitched a particular look for the tendrils based on an underwater documentary which showcased the existence of ‘brinicles’. Another key aspect of the work was the use by Image Engine of Unreal Engine to help craft the snowy backgrounds.

b&a: What was the filming approach for rooftop scenes like this in the show?

Geoff Scott: When we do the rooftop portions of our train shots, we do them a couple of different ways. We have a quarter section of rooftop built, a 15 or 20 foot piece, which has on one side a bit of a curvature. We’ve been steadily re-using that. It was built in episode 10 of season one. For anything where we require length, we have a longer partially raised—about three feet off the ground—set of trackway. And then everything else is just a bluescreen stage, where we have special effects with their Ritter fans on one end, blowing a bit of snow and smoke, to help give us more emotion and play a few ripples on fabrics. So, essentially, if the actor touches it, I like to have something physically built to track to and to work with, but everything else has been entirely bluescreen. 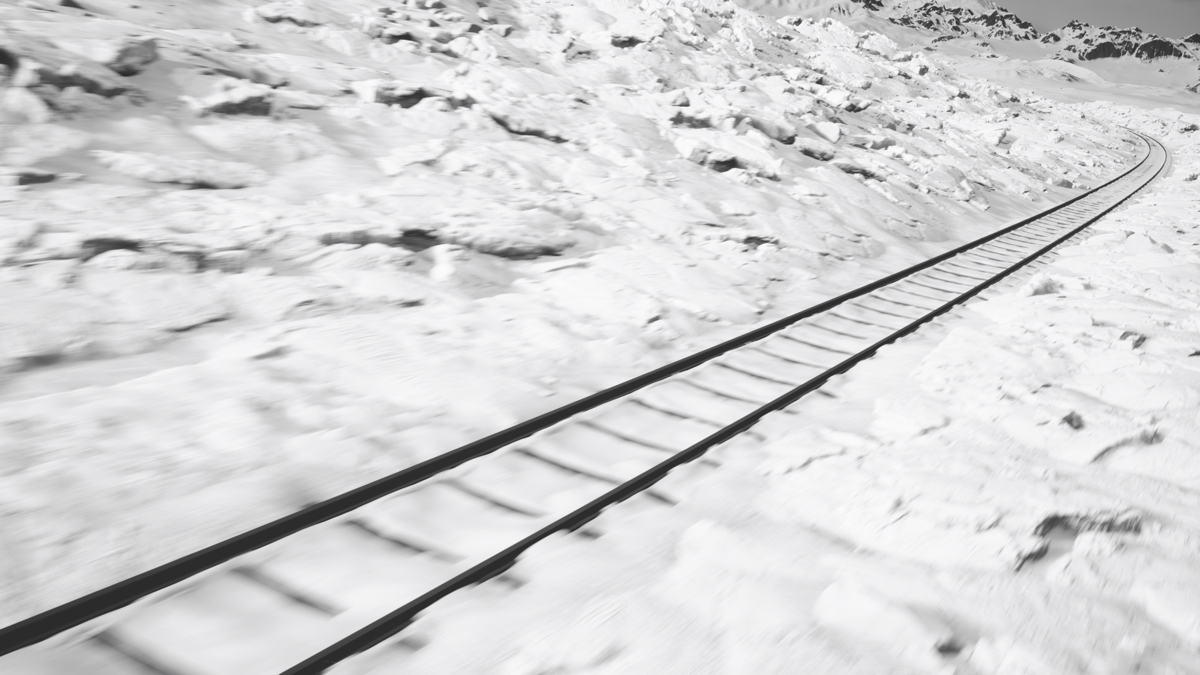 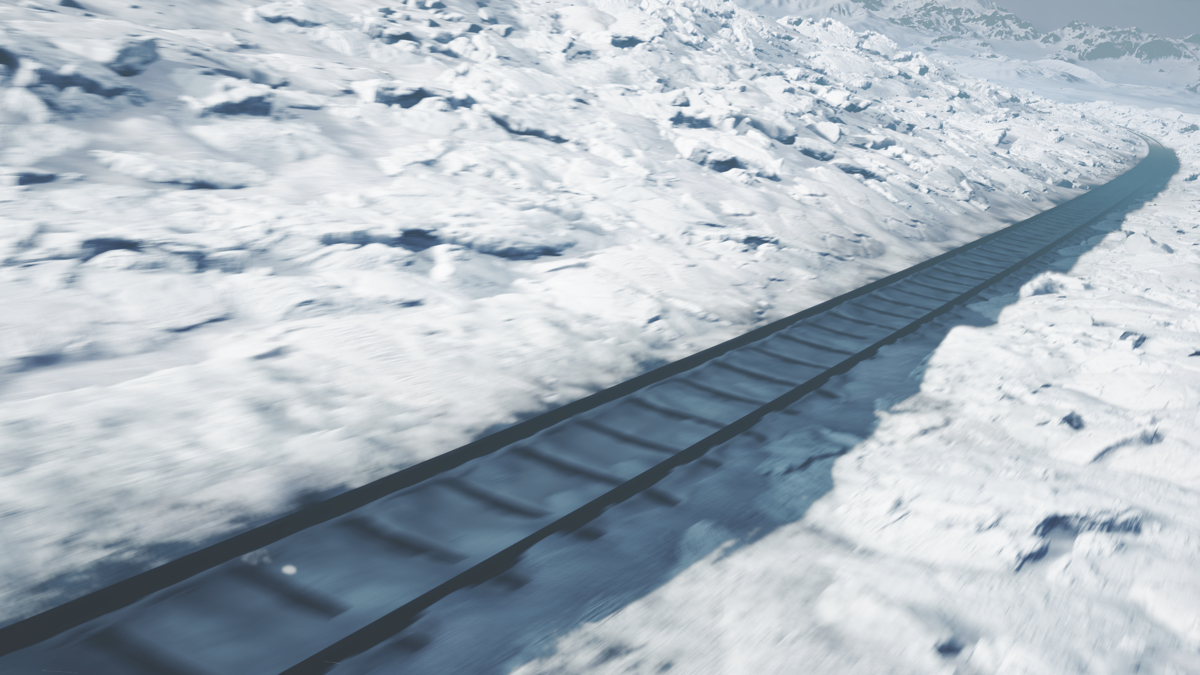 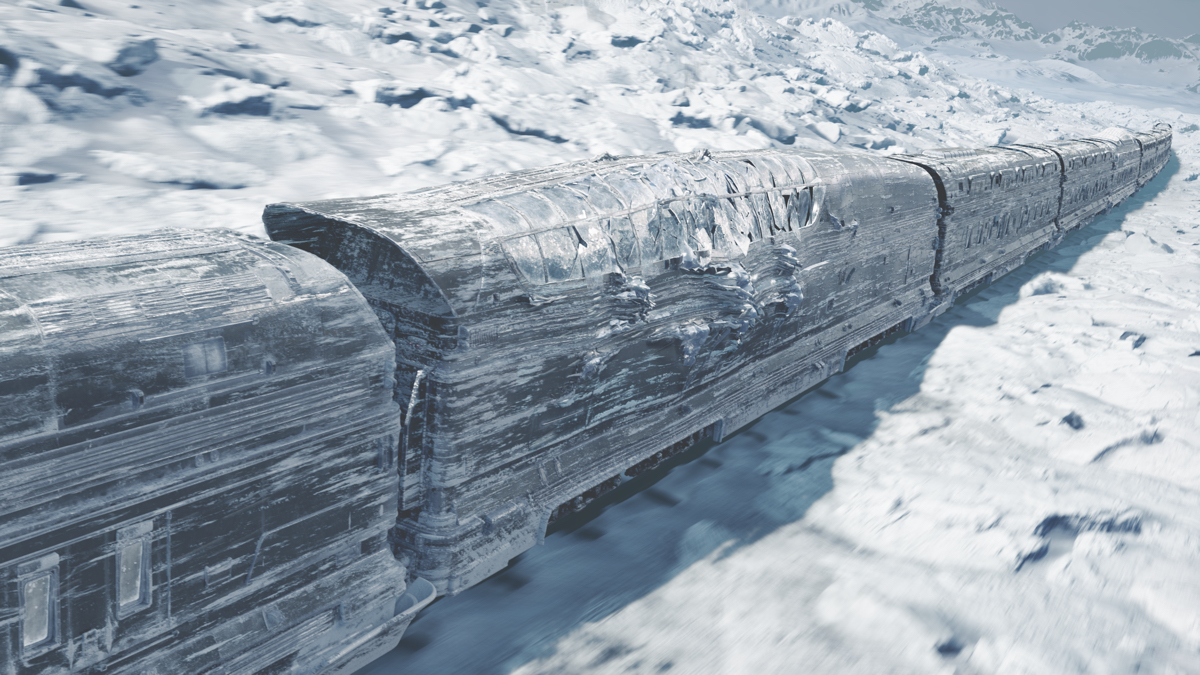 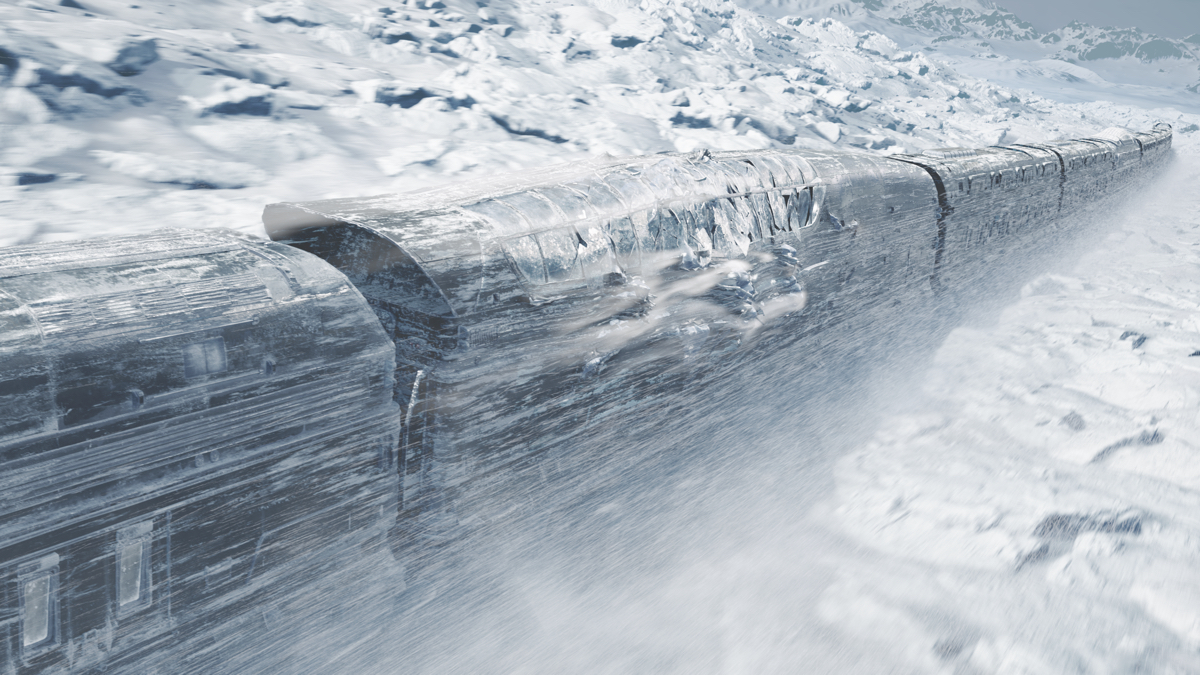 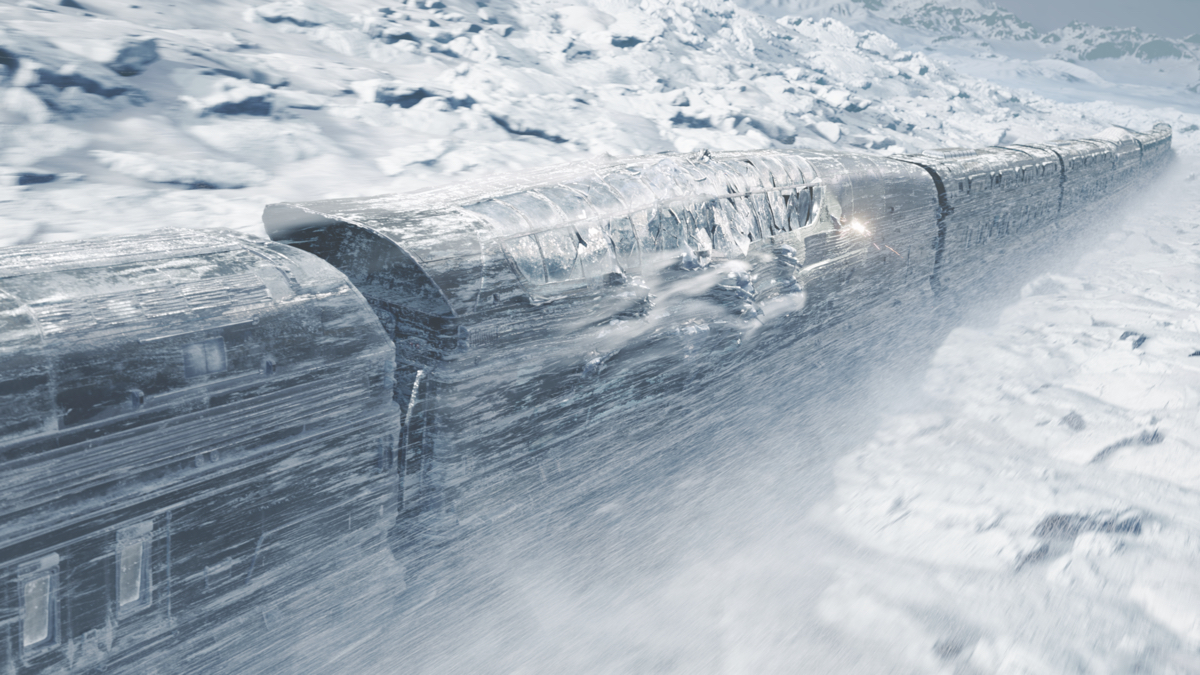 b&a: What are the ways that you’ve approached the actual snowy environment and the train here?

Geoff Scott: Image Engine did the entire sequence with Josie on the outside, as well as the aquarium inside. The train and effects were a combination of Houdini and Unreal. A lot of the environment was procedurally generated in Unreal using MegaScans for textures. Image Engine said, ‘Hey, we’d like to do this,’ and we absolutely encouraged it with use of Unreal. I have a background where I worked in games for a while so I’ve been preaching the use of game engines in visual effects. I was absolutely ecstatic for them to try that and move forward with it.

b&a: Then there’s that beautiful aquarium shot with tendrils of ice and the fish and the turtle. Tell me about the design for that shot.

Geoff Scott: Before we started season two, [creator] Graeme Manson said to me, ‘Okay, I want to pitch you something. We’re going to destroy the aquarium car.’ And I’m like, ‘Okay, then you need see this.’

I showed him what’s called a brinicle, which is something I’d seen a couple of years before in a David Attenborough documentary. There’s this timelapse of a brinicle, this icy finger of death, as it slowly comes down and starts encasing starfish, which are all moving frenetically, trying to get away from it. As we boarded it and developed it, initially, it was a bit too fast, and it was feeling a little bit almost like an ice monster or like tentacle monster, so we had to back down, so that it wasn’t purposefully reaching out and grabbing the fish.

Still, it’s all based on a real natural event, but it’s obviously dressed up to be a little bit more dramatic. I was really happy with the shot, because it was literally a year-and-a-half in the making, from my initial lunchtime pitch to execution. 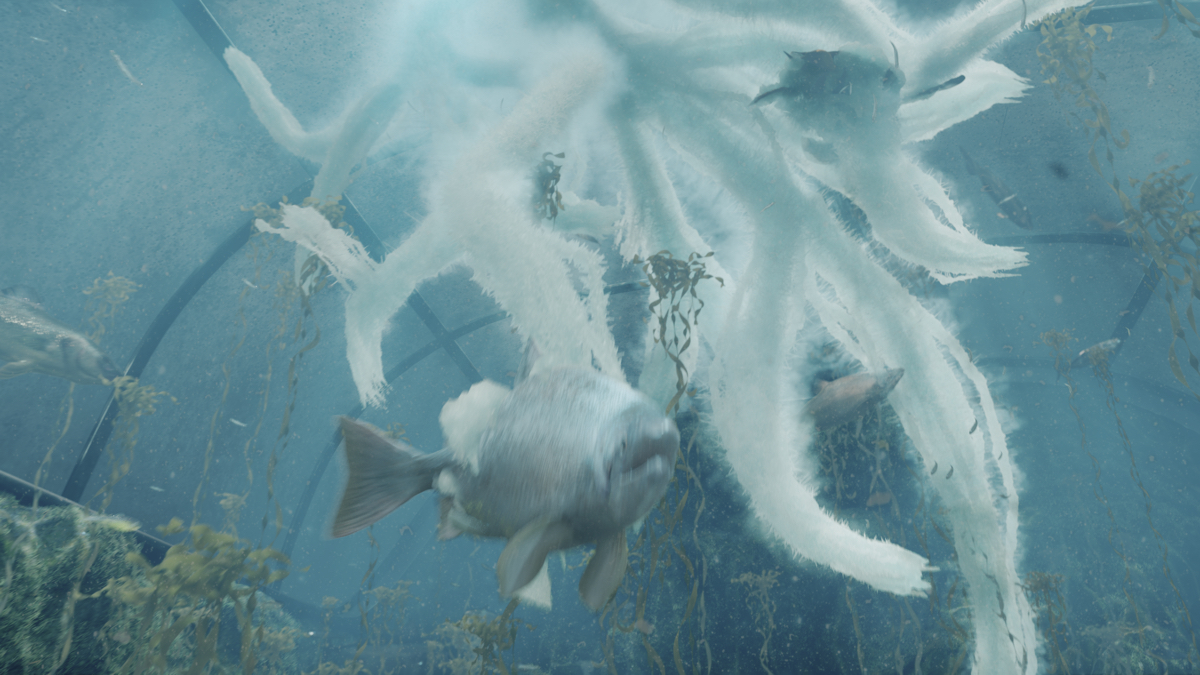 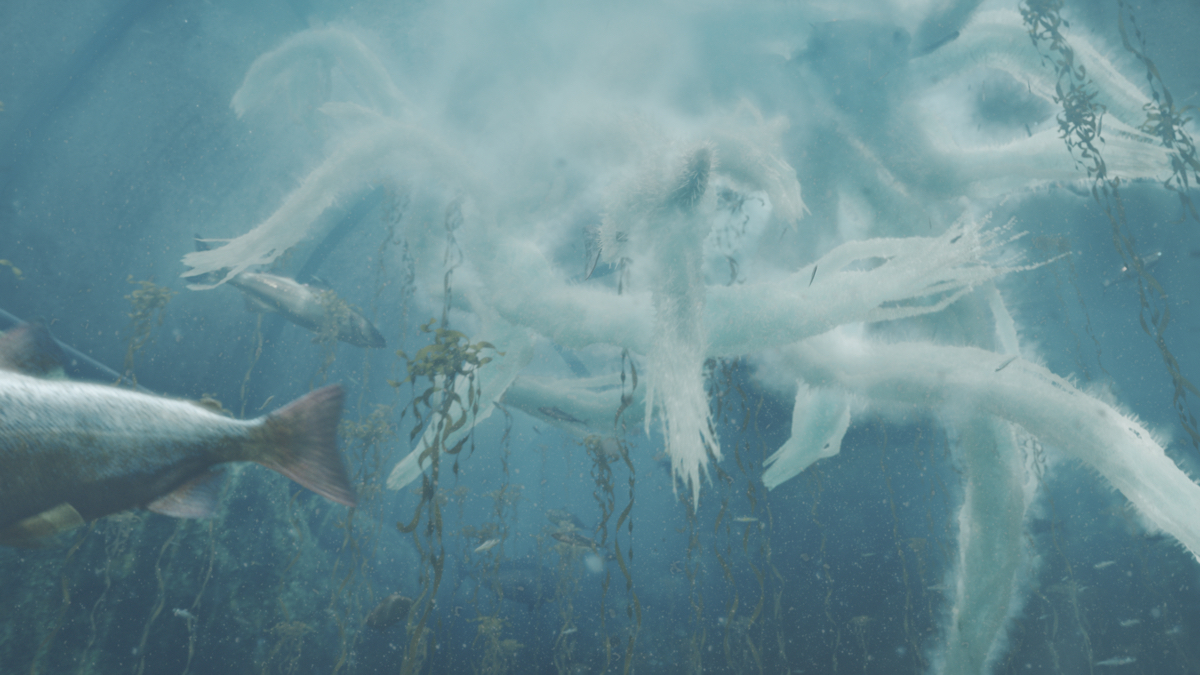 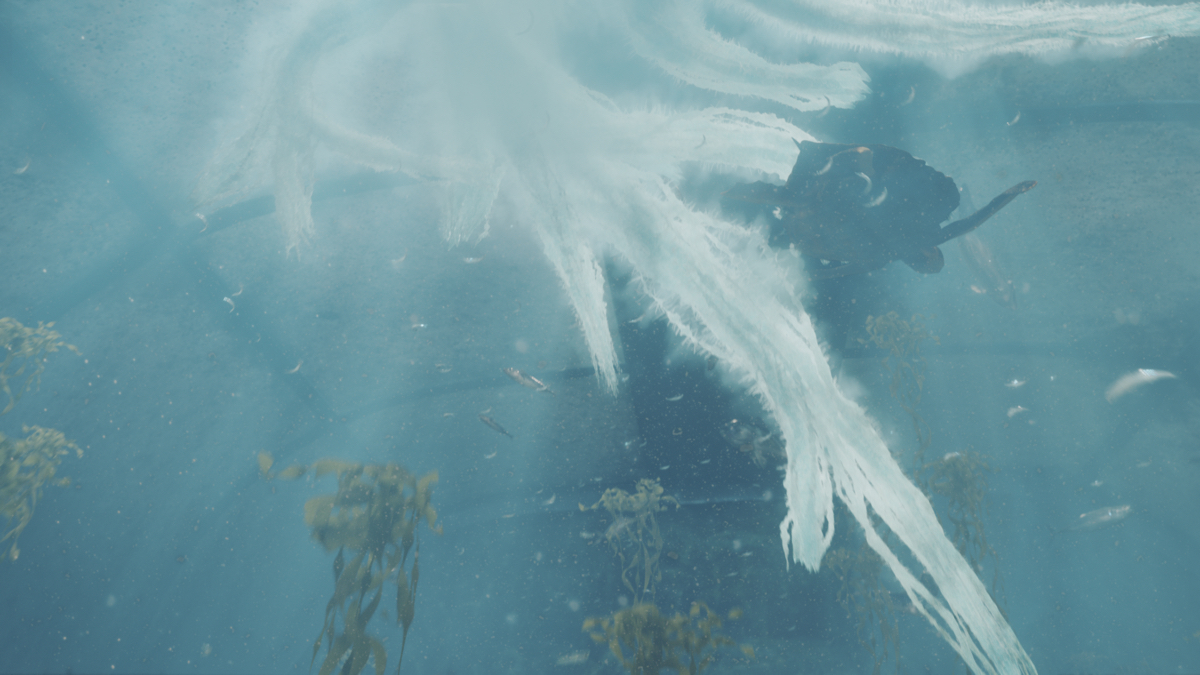 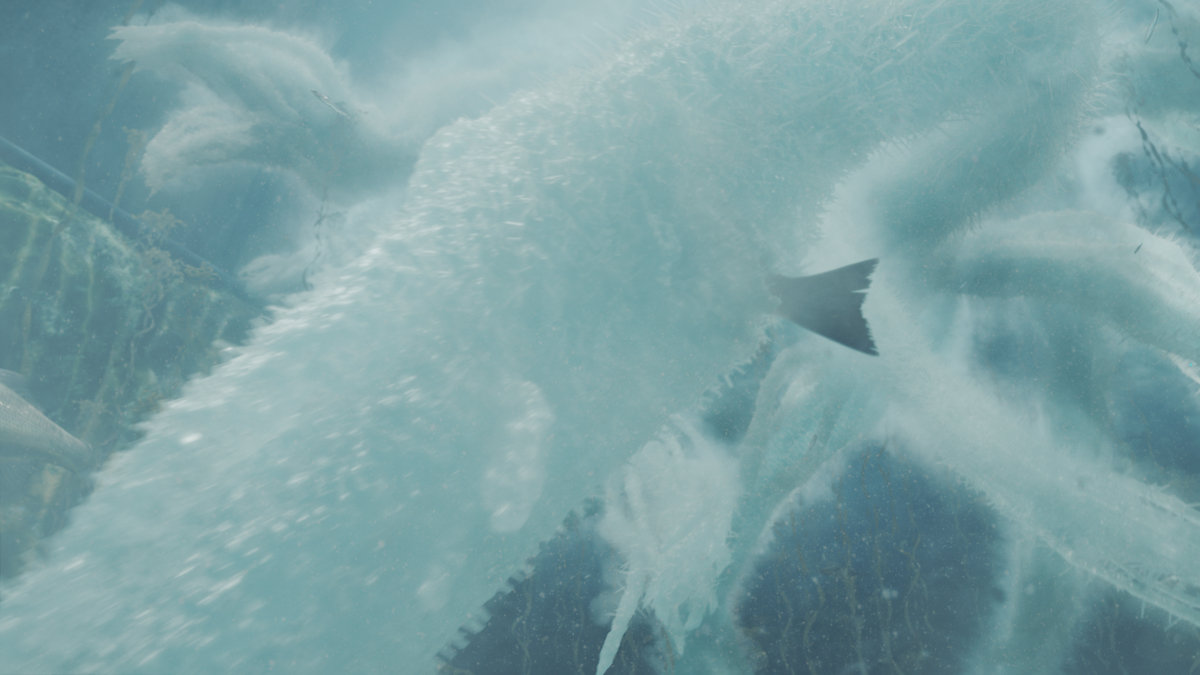 b&a: Was it ultimately a fully CG shot? Was there any kind of underwater footage shot?

Geoff Scott: No, it was fully CG. We had a whole bunch of assets from season one, as far as our fish. The one thing is, I love keeping our aquarium a little silty and a little dirty. So you always want to make sure there’s a lot of floating detritus in there. It always helps just add to the reality, moving through silt and fish food.

b&a: When the train actually explodes, what was the kind of lookdev and direction that you gave for how that should look on screen?

Geoff Scott: Well, to be honest, it was funny, because initially the direction was for it to blow up and have this massive compressive explosion. And I was like, ‘That’s not real, guys.’ And they’re like, ‘What?’ I said, ‘Look, water only expands 9%, so it’ll buckle, it’ll definitely crack.’ You see, I like to build as much reality into our world. I was trying to keep the physics and the simulations as grounded as humanly possible, because that’s where we maintain our believability. So I was like, ‘Really, the explosion should be more of a by-product of just the sheer violence of the train tearing itself apart.’ 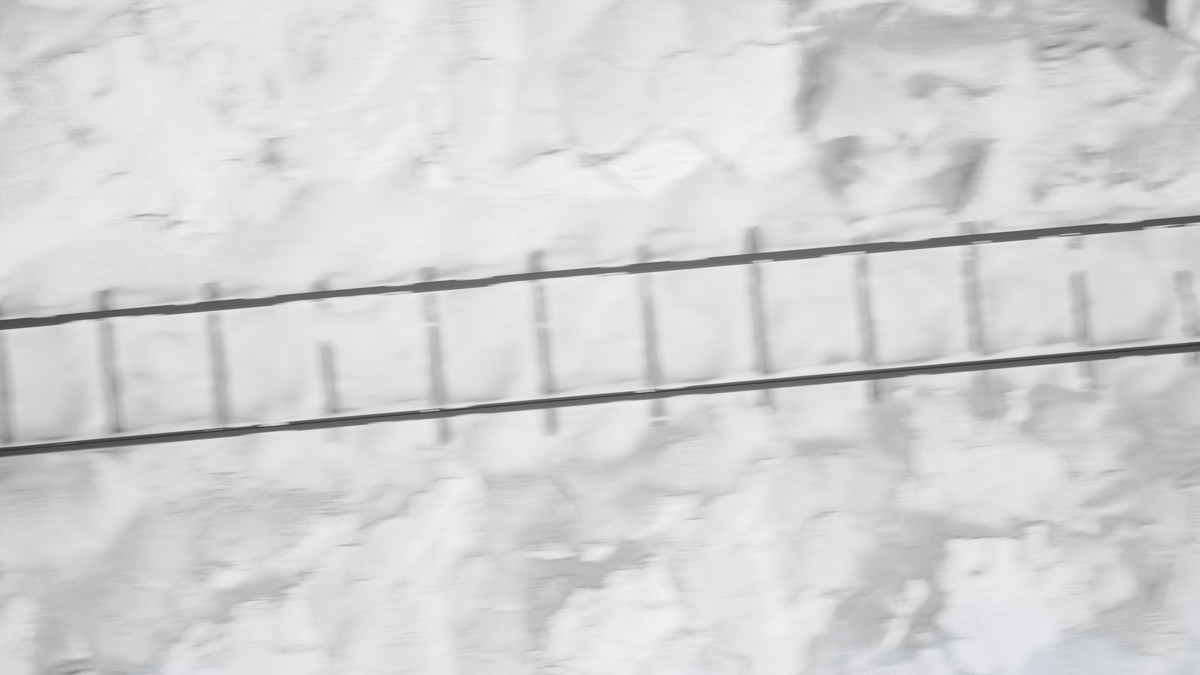 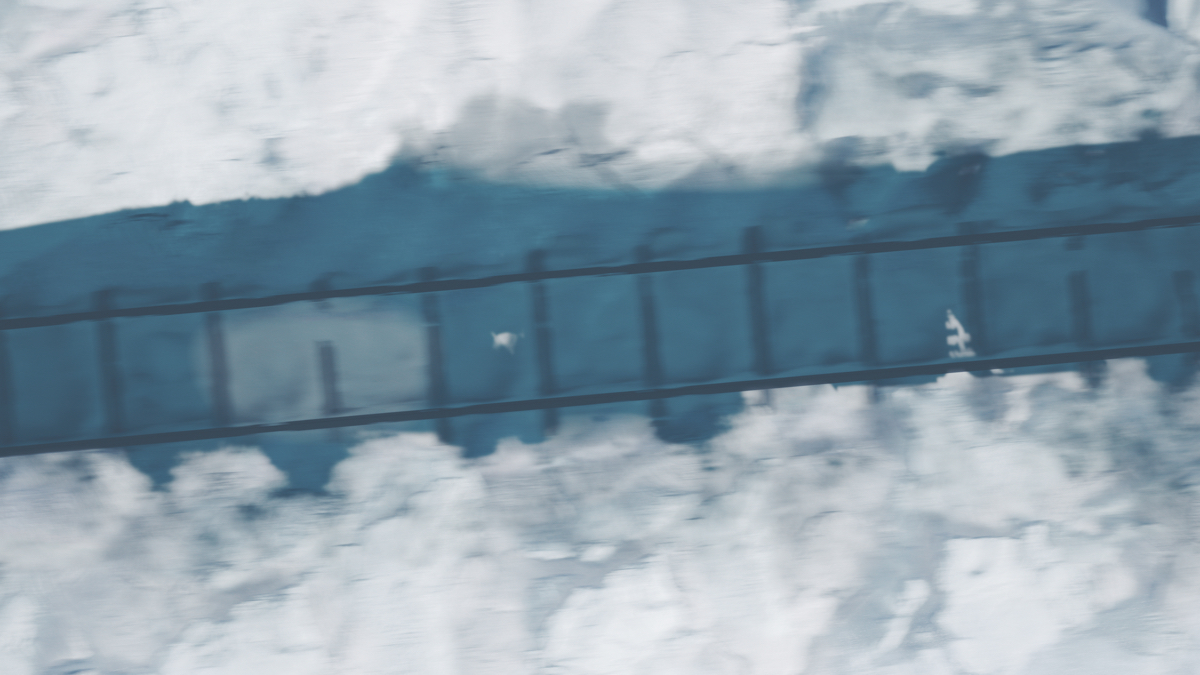 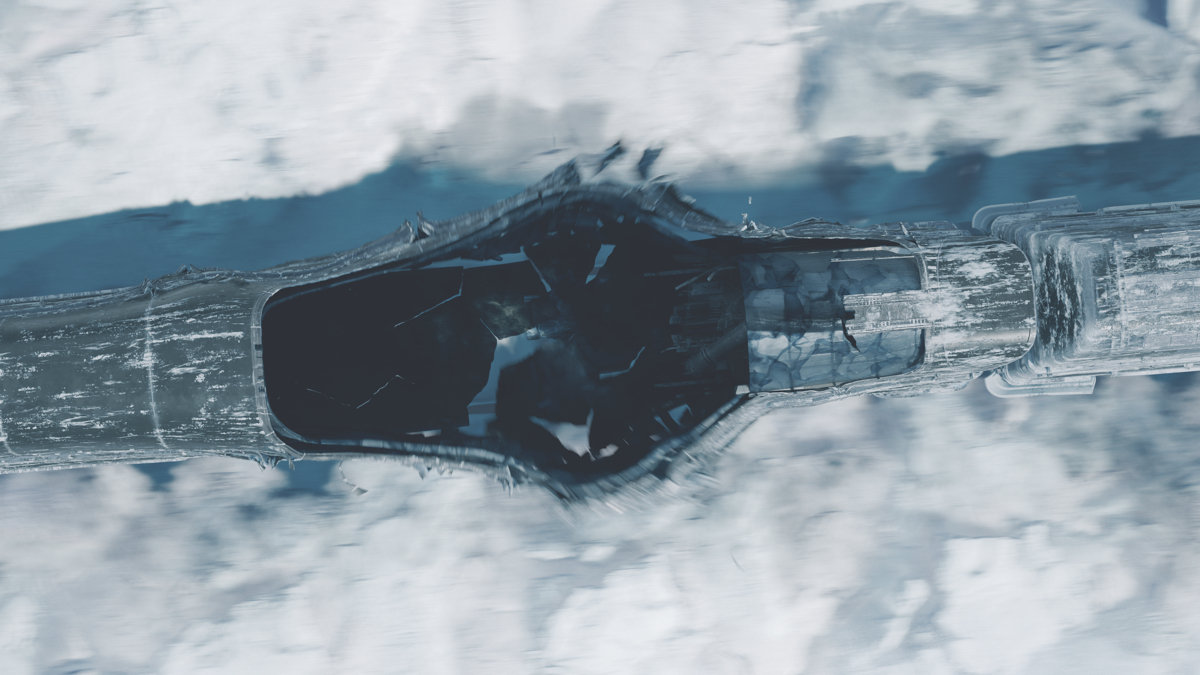 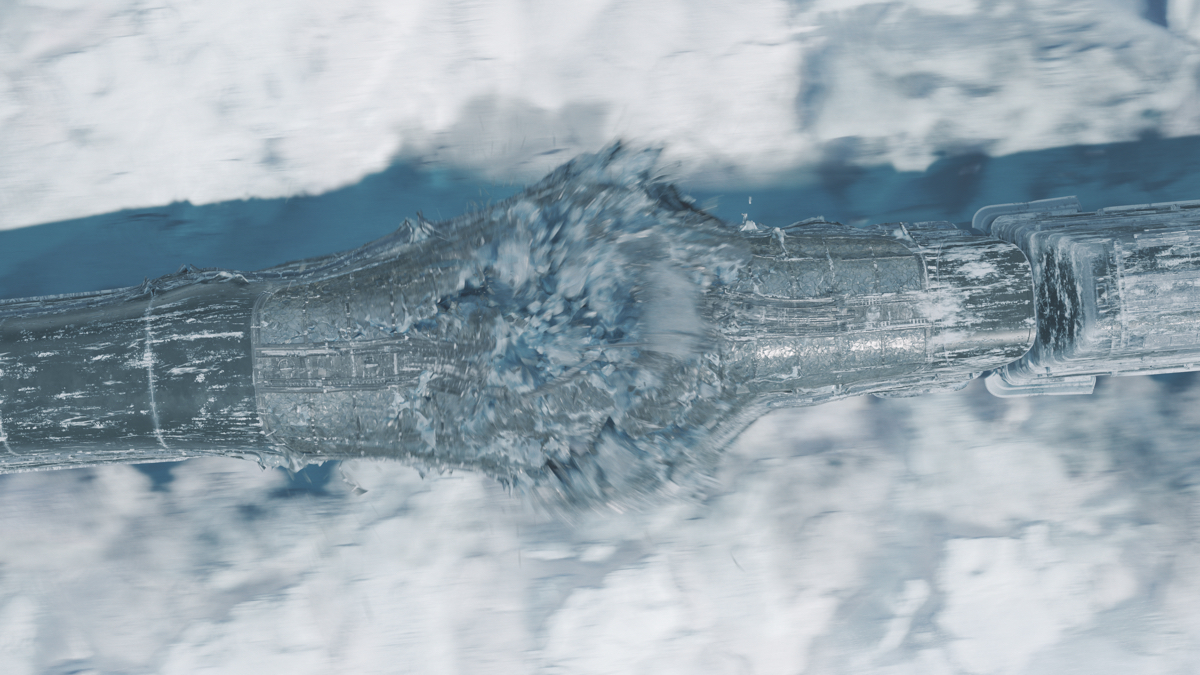 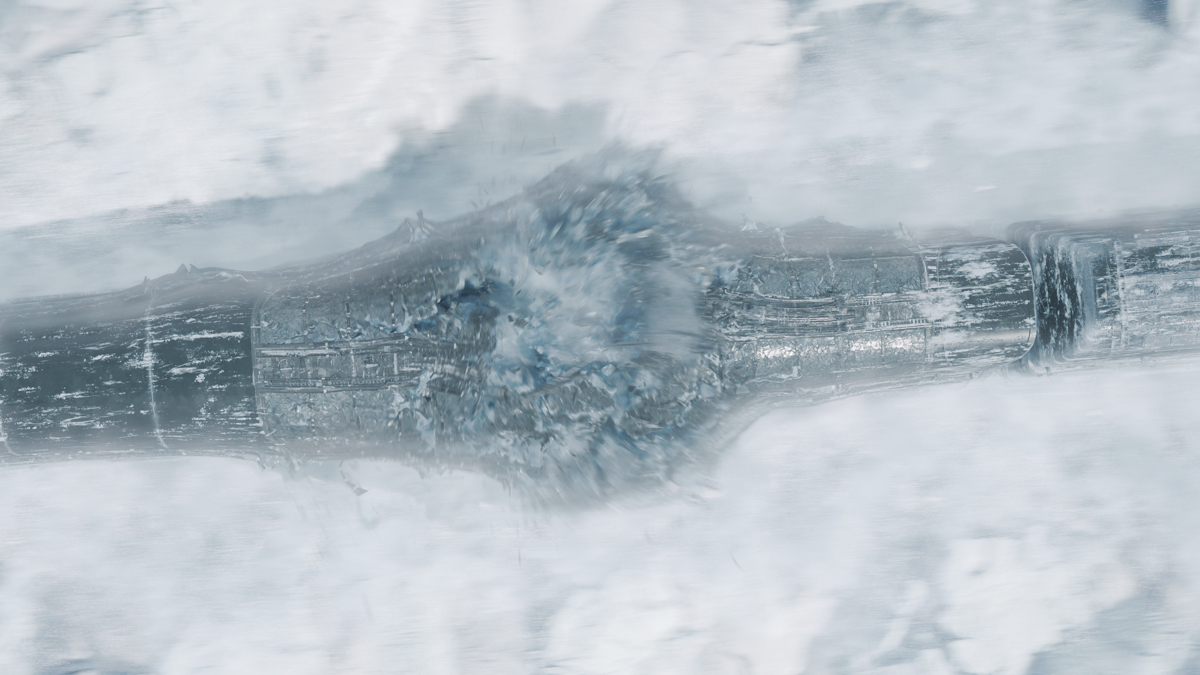 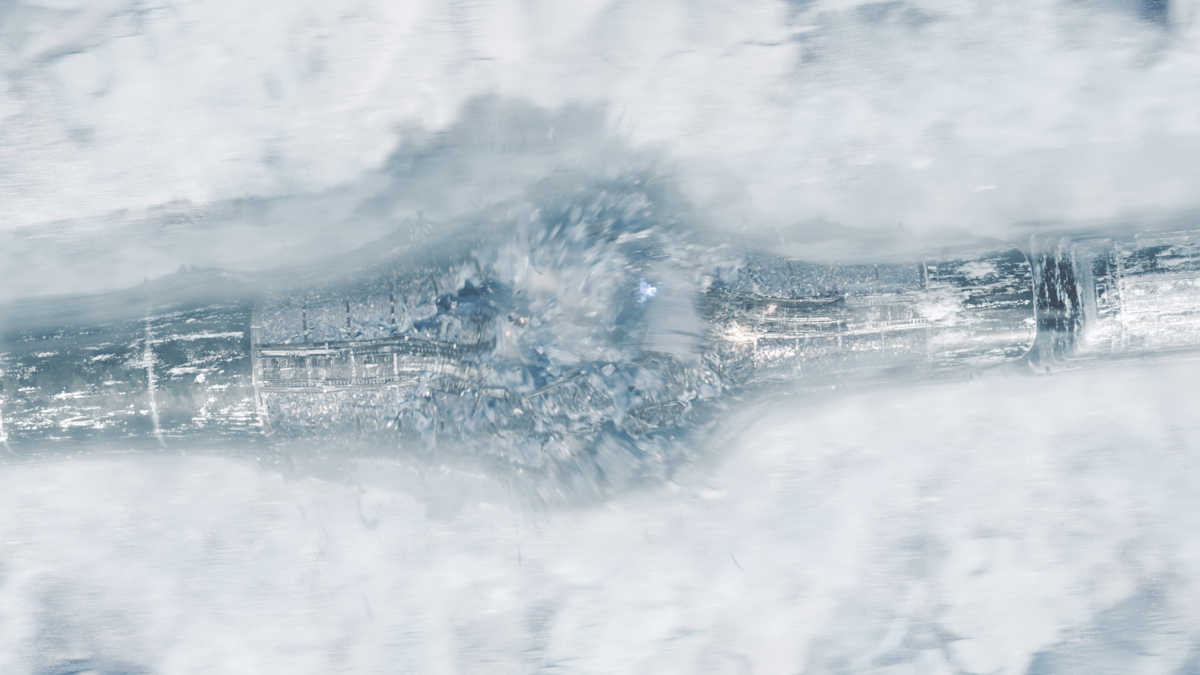 If you actually look at the explosion, it’s definitely an expansion. As the ice cracks through, it’s going to destroy the superstructure of the train, and then it’s basically going to tear itself apart. And that’s where all this dynamic and dynamism from the shot comes from.

So, that was the direction. And again, Image Engine, it was one of those things, they were with us right from layout on that. Because of the complexity of the simulation, they were working on it for a while. I was like, ‘Okay, when are we going to see that shot?’ And they’re like, ‘Yeah, yeah. You’re going to see it soon.’

And then they showed it, and I was absolutely relieved with how gorgeous and beautiful it looked. We had a few tweaks here and there on it, but what they presented was exactly how I envisioned the shot months earlier, so that was fantastic.

One Reply to “Icy fingers of death: the ‘Snowpiercer’ aquarium scene was based on the real-world phenomenon of brinicles”