One of the models is now hanging in the lobby of an airport hotel.

Stuart Baird’s Executive Decision is a quarter-century old. Back in 1996, effects involving planes—in this case a 747 and the experimental ‘Remora F117x’—were still something largely realized with models and miniatures.

And that’s exactly what was done on the film; miniature planes crafted by Grant McCune Design (sadly, Grant McCune passed away in 2010) served as the basis for the aerial and crash scenes. A variety of visual effects studios also contributed key digital VFX to the movie.

On the 25th anniversary of Executive Decision, I thought I’d look back at the miniatures work, in particular, and give a few heads up about where you can actually still spot some of the models (hint: an airport hotel lobby). First, a look at a fun ‘McCune Design’ reel which showcased some of the previous work done by Grant McCune Design, including on Executive Decision.

What Grant McCune Design did for the film

To get a handle on the miniature effects the studio carried out for the film, you can look no further than what seems to be an older official YouTube site for Grant McCune Design. It has a run-down of the work, and some neat behind the scenes info. I’ve reproduced the text, below.

Over a period of a week, three 747-200s were shot in various situations seen in the movie. Bob Wilcox was responsible for the airfield, winch and small private aircraft that got chewed up by these behemoths. Location was Hansen dam when it was a rock quarry, prior to it being a lake.

For the scenes where the 747 drops out of the sky onto the runway, the aircraft was suspended from a rolling rig, running on heavy duty cables suspended between two Champion cranes.

The test scene in this video is what follows after the 747 has touched down; it crashes through the fence then eats up the little private aircraft, then self-destructs.

GMD was responsible for:

– 2 x 747 for the actual shoot. High detail, lighting flaps, super detailed functional landing gear. One would end up on a mo-co rig for the flight / dock sequences
– 1 x 747 for testing the rigs. basic 747 same mounts less detail
– 1 x 747 complete lower half was built with motion control landing hear for the gear out sequence, high detail, scribed panels, accurate functional gear doors
– 1 x 1/12 scale nose portion of the 747 with the avionics hatch and snorkel from the stealth for the docking sequence
– 2 x 1/6th scale modified stealth fighters, one with a motion controlled snorkel that had an articulated hatch with an extending passage to mate with the 747. The second was for the post dock sequences where the stealth hung and swayed via the snorkel.

Here’s the behind the scenes video:

Meanwhile, Jack Edjourian, a prop-maker on the film, posted the text below in the ‘Miniatures in Movies’ Facebook group, along with some great behind the scenes imagery:

Three complete airliners were built, motorized fans, with internal/ external lighting, one ended up on a giant model mover and David Stump shot all the moco passes required while the other two ended up in Hansen dam at an 1/12th scale airfield built by the WKR team, the jet had pyro breakaway engines on the starboard side, the little private aircraft were rigged to blow too, some A/B smoke elements were brushed on the tires and runway before doing a take, aircraft was winched from the main gear and a rod controlled the rotation af the aircraft, gently bringing the nose gear down before this giant went tearing through the little Cesna’s and piper cubs.

Eric Harelstad devised the mechanism for the Remora (fat F-117 stealth) docking sequence, a larger forward portion of the aircraft was built with the hatch to the avionics bay, this was the access point where the elite team squad entered the aircraft mid flight, also where Steven Segal got sucked out, this whole docking sequence close-up was shot in a vertical position so the umbilicals would fall down when blown with the air mortar, we did this all at Grant McCune Design, around 1995. A hell of a lot of fun, Peter Donnen was the VFX director.

Where you can find the miniatures now

Amazingly, one of the 1/10th 747 miniatures—now in PanAm decals—is hanging in the foyer of the Airtel Plaza Hotel near Van Nuys Airport. A couple of Facebook and Twitter users have posted photos of it, plus the hotel itself features the model in a gallery on its webpage.

At an auction called ‘Hollywood Extravaganza Famous Movie Props & Costumes’ held in 2016, Grant McCune Design’s stealth plane miniature was up for grabs, and seems to have been sold there. 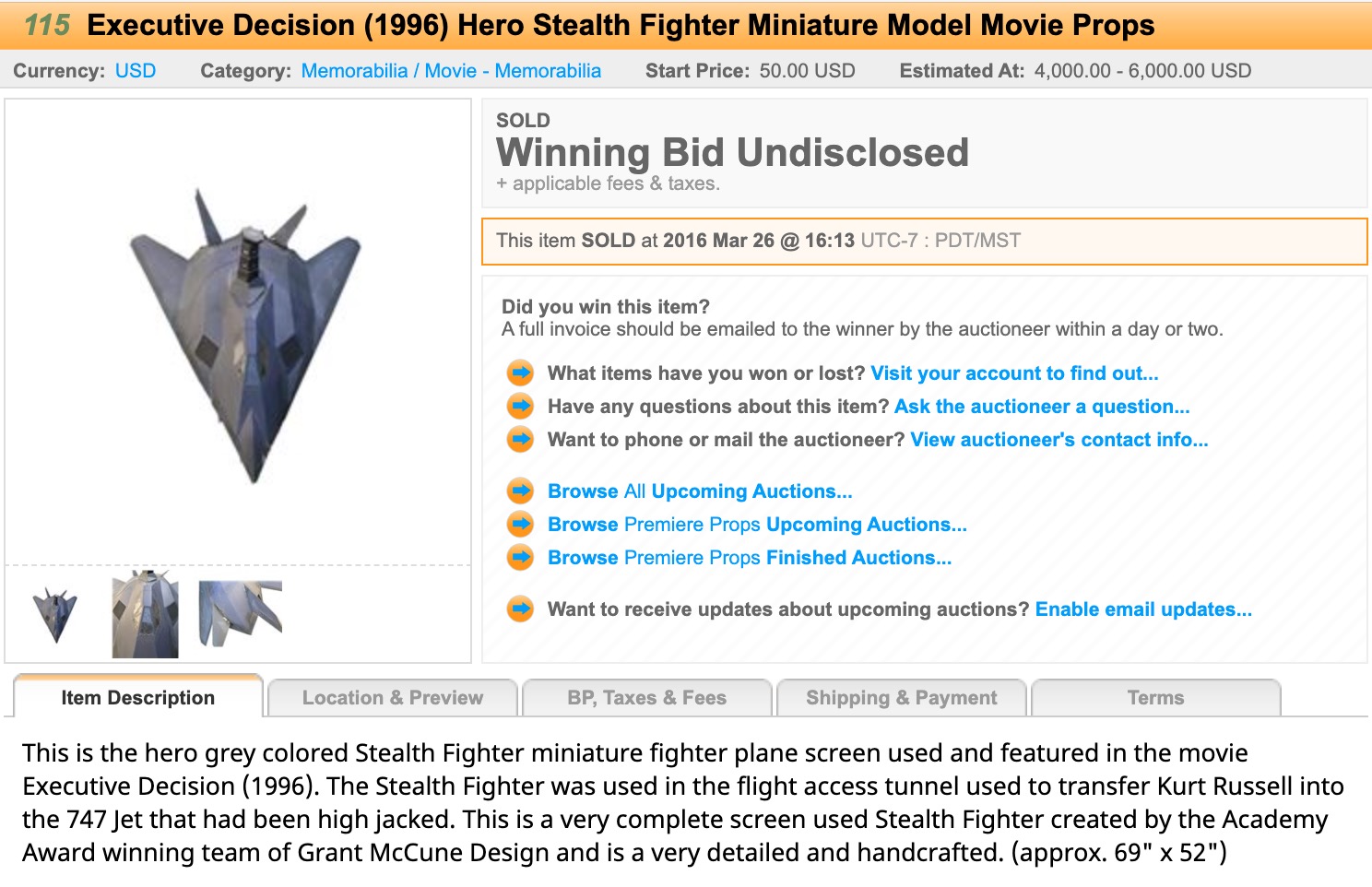 Hope you enjoyed that trip back 25 years. For me it’s fun to know that these miniatures sometimes live on, elsewhere.