For me, Cinefex was everything.

In 1997, I had started studying law at university in Australia.  But actually I was more interested in filmmaking and ‘special effects’. One day, I was in the main street of the Sydney CBD when I randomly walked into one of the comic book stores there.

It was such a crappy shop (it smelt really bad, I still remember that). But on one of the shelves they had this magazine called Cinefex and on the cover was a CG dinosaur from The Lost World. I flicked through the pages and I fell in love. 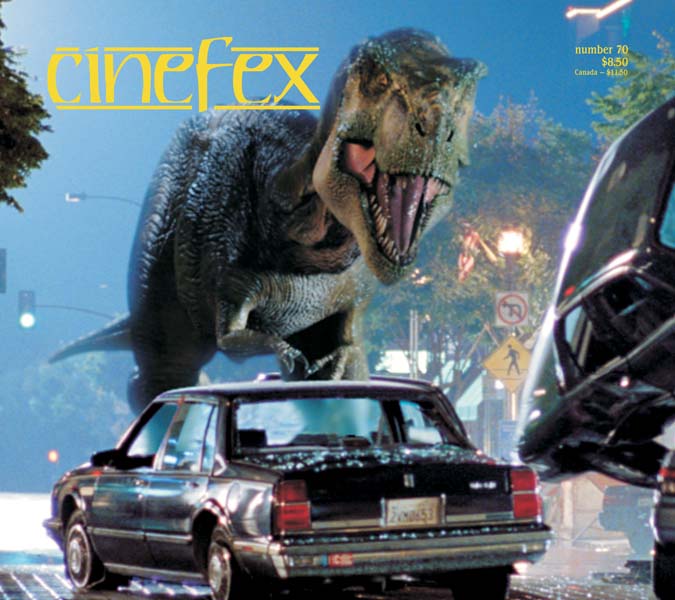 I bought that single magazine and read it straight away about three times over. (There’s also something about the ILM frame that looks so real, I mean, that T-Rex is in San Diego. It just is).

I think it wasn’t until the next day that I dialled up on my 14.4 modem and searched for ‘Cinefex’ on AltaVista (remember when the Internet was kind of an afterthought?). Not much came up except a few message board links and something at Todd Vaziri’s amazing VFX HQ about the magazine.

I only realized then that there were ‘back issues’ of Cinefex you could get. So, I rang that comic book store and asked if they had any. The comic book guy told me that literally that morning someone had dropped off a whole box of old Cinefex’s. I asked if he could hold them for me (he did). Then I went in again the next day and bought the whole box. What a treasure trove.

Then I discovered eBay. That’s where most of my back issues came from. I got a small scholarship to go to university and I spent pretty much the whole thing on Cinefex back issues. (Don’t tell anyone).

Another comic book store – Comic Kingdom – that was then around the corner from that other store in Sydney also had Cinefex magazines. I got a ‘standing order’ there because I don’t think (unless I’m misremembering) you could order Cinefex to Australia at the time, but comic book stores seemed to have a way. I distinctly remember the comic book guy at that store always saying, whenever I walked in and he recognized me, ‘No, Ian, we don’t have the new Cinefex in yet…’

That was 24 years ago, and back then I was already way late to the Cinefex party. It changed my life, that magazine, and I am desperately sorry to see that it is no longer. The journalism, the insight, the commitment to quality – nothing comes close.

I was, am and always will be OBSESSED with Cinefex.

Thank you, Cinefex, for everything you’ve done for the visual effects and film industry.

3 Replies to “A tribute to Cinefex”