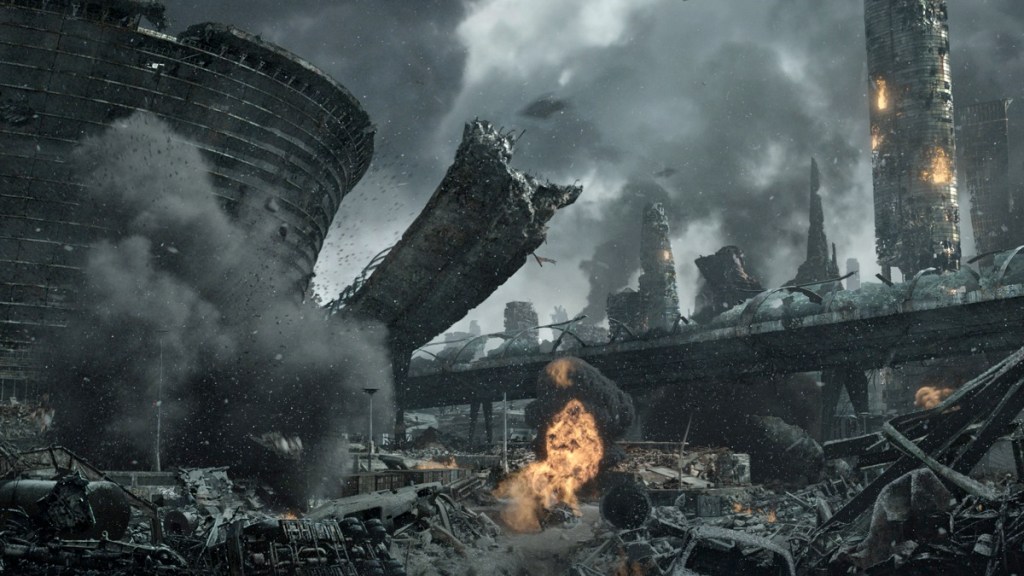 A breakdown of a single shot from the show.

The second instalment of befores & afters’ #shotmakers series is here, and this time we’re looking at how MR. X crafted this dystopian environment shot for Raised by Wolves.

Starting with a real plate, the studio built a destroyed environment around it with digital matte painting work. The storytelling side of the shot was to quickly communicate life on a futuristic Earth. MR. X CG supervisor Mai-Ling Lee breaks it down.

Working with the plate

Mai-Ling Lee: We inherited the shot from another vendor but at a very early postvis stage. They had the plate roughed in and we had direction based on that version. To truly assess the scope of the build, our first step was to concept a styleframe in DMP.

Sometimes when a concept is loose and lyrical, you can easily set a mood. But, especially with shots of this scope, I try to support the DMP styleframe with a backbone of 3D at proper scene scale, with a solid lighting pass. In my experience, this can accelerate the process and perhaps more importantly uncover potential challenges, early enough to solve or pivot at a much lower cost.

With that in mind, we blocked composition of the DMP styleframe in a 3D layout. We had some assets built, some in progress, and also create new ones to accommodate the new shot. While the layout was in progress we gathered references, created mood boards, experimented with skies, and established a general palette.

Then, with a sky, light direction, and tone in mind, we set up a camera with lensing that fit the kit from the show and lit the 3D layout. A hearty paintover of the lit 3D layout which included the placement of the plate was iterated until Ridley Scott and his team were confident, we were on the right track.

The very fleshed-out styleframe brought efficacy to all facets of the shot build, but it indeed took a team to get there. Full CG damaged buildings were determined by lighting, reflections, FX interaction, and distance to camera. FX ready upgrades to the models targeted by the styleframe for sim destruction. Compositing and FX also used the styleframe as a touchstone for amount scale and character of the fire, smoke, explosions, ash, jet stream, etc.

Once we had the build established, lighting design and technical quality control therein were integral to delivering all the CG elements to the compositor. To bookend the construction of the shot, DMP provided compositing with paintover elements of a large percentage of all the CG to layer additional details to visually support the story. The sky and clouds were built with both photographic and painted, elements again layering character and detail for compositing to then bring to life.

Finally, the compositing artist/magician, took all the individual CG components and also added his own to creating something greater than the sum of its parts.

The challenges of marrying plate and CG

The challenges of integrating the plate were rebuilding or altering the edges of frame because of the lens distortion which wouldn’t naturally occur in the middle of a frame. Also, perspective of the plate, in relation to our target of a much wider scope took some talent and muscle from the compositing artist. Another item that took a few iterations, was finding a balance to match scale, legibility and character of the cg soldiers to the live action. Marrying the CG to the plate smoke, atmos and explosions was pretty straightforward.

We created a CG camera for the frame we see in the show, with a projected camera for placement of the plate within the frame. Then it is the usual matter of FX sim performance, lighting and comp integration to set it all in the same world. Finally, scope and time truly have to be mentioned if we are considering our biggest challenges on the shot.

Layout, modeling, rigging, camera design, and animation were done in Maya. DMP in Photoshop. Surfacing in Substance, ZBrush and Photoshop. FX, lookdev, and rendering in Houdini. Nuke for the final composite.