Directors Tomm Moore and Ross Stewart reveal the secrets behind their animated feature.

When I saw Wolkwalkers, the Apple+ animated feature from Cartoon Saloon directors Tomm Moore and Ross Stewart, there was just something about the shot composition in the film that was an instant delight.

It felt like a storybook, or a comic book, where traditional staging of landscapes and characters had been slightly abandoned for more interesting and unusual compositions.

So, when I got a chance to talk to the directors, I decided to ask them about exactly this. Read on for a befores & afters chat about that aspect of the film, plus a discussion on the very deliberate existence of pencil lines in the final imagery.

b&a: I just really loved how varied and how different and how storybook-like, of course, the film felt. There were these amazing two shots or closeups of the characters, and then they would have these other shots with very unusual staging. It is a bit of a feature of your films in general, I guess, but can you tell me a bit about how you came up with that staging for the film?

Tomm Moore: At the start, we had the storyboard artists—they definitely looked at our previous films too—and we made a little storyboard kind of manifesto of what we had in mind. Where we wanted to use the kind of illustrative type storytelling that we’d done in Secret of Kells and push further into having a little rule book about when we would use depth, when we would use triptychs and split screen and comic book kind of framing and stuff like that.

Then as the storyboarding went on, we had certain storyboarders who were more like cartoonists, more comic book style, and then other storyboarders who would take like the action sequences and they would bring a live-action sensibility that would then be a challenge for the art department to translate into ‘the Cartoon Saloon style’.

Ross Stewart: I think also what you’re referring to there does come from our very, very early stages in Cartoon Saloon, even before Secret of Kells, in terms of an illustrative style. So if we wanted to say draw a character like Mebh who was feeling enclosed, we might draw a big square box around her. And then you get to the format that you’re working in, which is widescreen for our format, and you go, ‘Well, why do we have to work with that? Can we not just make a little square box around it and have Mebh follow enclosed in a big black box?’ So I think it’s just allowing maybe the freedom of graphic novel approach, or illustration approach, and just bringing it straight on to the screen.

There are some parts where we have triptychs and we have panels sliding in and out and it really is very much like a graphic novel or a comic book approach. And I think we just try not to be encumbered by the rules of them. 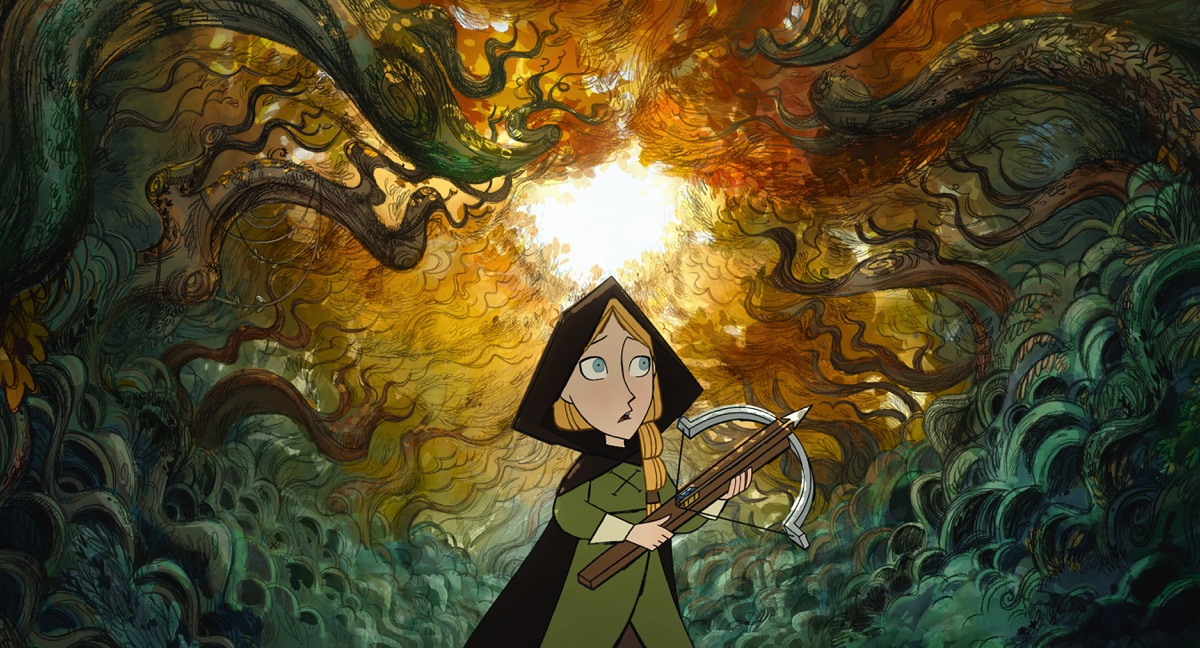 b&a: That’s exactly how I felt about it. In many of the 3D animated films that I cover, I feel like they’re trying to go back to using a lot of live action cinematography techniques, which is a great approach, but I just love that in this film, there were so many varied shot compositions. One of my favorite things was when you really did go out for a wide shot of any view, in the forest or say the town, and you would see there people actually walking through the town. Did you ever feel like there could be too many styles? Could anything go? I liked that you mentioned breaking the rules there, Ross.

Ross Stewart: I think there were a few times actually where other people might’ve said, ‘Oh, you can’t do that.’ And we were like,
No, we will. Let’s do it.’ So I think it was either a stupidity or a bravery, but I think it also came from the fact that we had seen films, like Into the Spider-Verse and other films like Sin City that had broken the rules and they had worked. So they’d maybe given us the bravery to kind of go, ‘No, it worked for them. It’ll work for us too.’

There’s a safety in conservatism. If you want to play it safe, at least you won’t make big mistakes. Whereas if you try and break rules, it could be a flop or it could be a success, but there’s that danger.

Tomm Moore: Also, short movies. I remember seeing a lot of Eastern European short films and even Hungarian features like Son of the White Mare. Just because it’s a feature you don’t have to get all fancy and think that it has to be live-action. And I think it’s kind of cool that animation can have a live action-esque sequence and then go really illustrative and really less dimensional or even within a sequence from shot to shot, you can do that. So I think we tried to lean into that and it was fun. I know a lot of the storyboarders at the beginning liked the challenge of having to impress us with doing crazy compositions and that was fun. 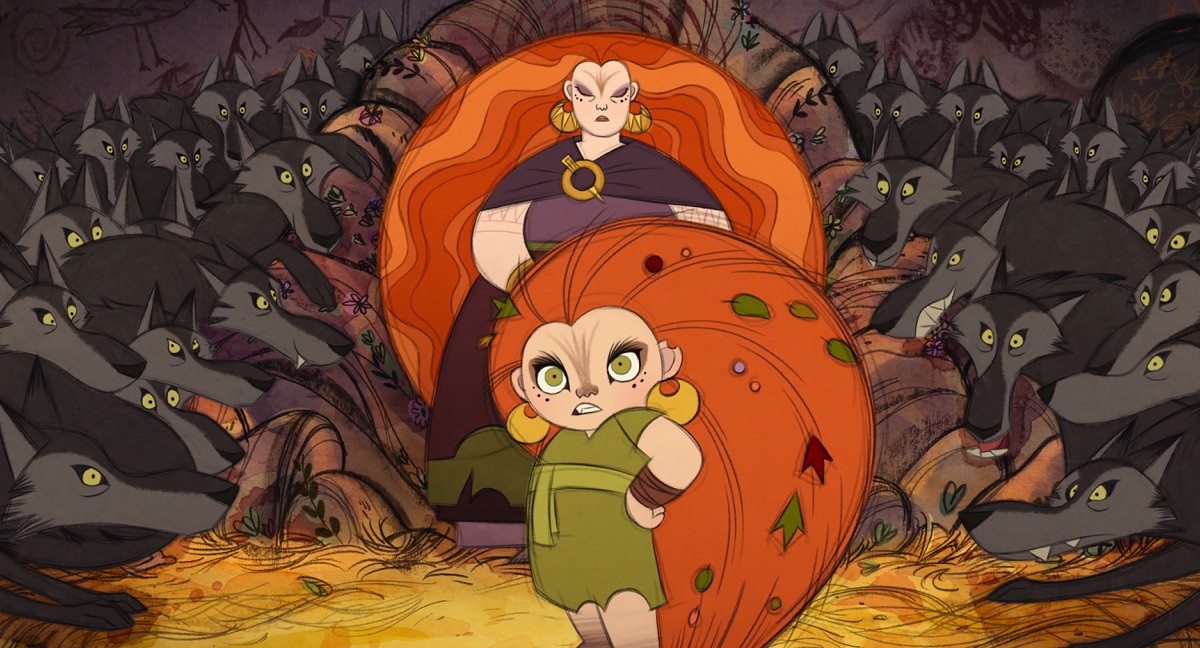 b&a: When shots in the film became a bit more elaborate, I’m interested in some of the technical approaches there. For example, the great wolf vision shots, or when they are really are running through the forest and there’s a lot of complicated camera moves.

Ross Stewart: Well, we had a really great assistant director, Mark Mullery, who used to be technical director on Breadwinner, and so he has a real technical mind, he knows After Effects and he knows a lot of compositing stuff. So he knows tricks that can help transfer from storyboard into layout and then into final compositing. And we would have a few ideas ourselves too. But for those specific shots where there’s lots and lots of levels and Moll is running through the town and there’s buildings and people and everything whizzing past the camera, they were more technically challenging.

I remember a couple of shots in particular in compositing stage, they had to, in the end, build a 3D surface of the ground and have these planes go past like a pop-up book. So they were probably the more challenging ones within our style, but then in wolf vision itself, that was a whole other pipeline.

For ‘wolfvision’, Mark was like, ‘We’ll let Eimhin McNamara worry about that’. Evan was the director of wolfvision. It was outside of the main production pipeline, and it was a really time consuming, laborious process, the whole wolfvision thing, because Eimhin had to make camera previs shots in 3D made worlds, in CG rendered forests that he built in VR.

Then once Tomm and myself were happy with the camera previs, then every single frame was printed off and hand rendered on paper—fully hand rendered backgrounds, fully hand rendered characters and effects and everything. So it was just a massive amount of pencil lines and charcoal lines. The three and a half minutes of wolfvision took the whole length of the production of the film.

b&a: Although you had that technology available to you, I also felt like I could occasionally see pencil lines and things like that. I wonder if you can talk a bit about that because I absolutely love that as well.

The big thing for me at the beginning was, I’d seen The Tale of Princess Kaguya when Song of the Sea was released, and I loved how expressive it was. And I love in short films and even in the old Disney films like Sword in the Stone and 101 Dalmatians, when you can see that it’s a drawing. And I just had the idea really early on with this movie that it would be great to make a virtue of the fact that it’s hand drawn and to really make it look like a Glen Keane line test or something like really, really rough and scratchy. 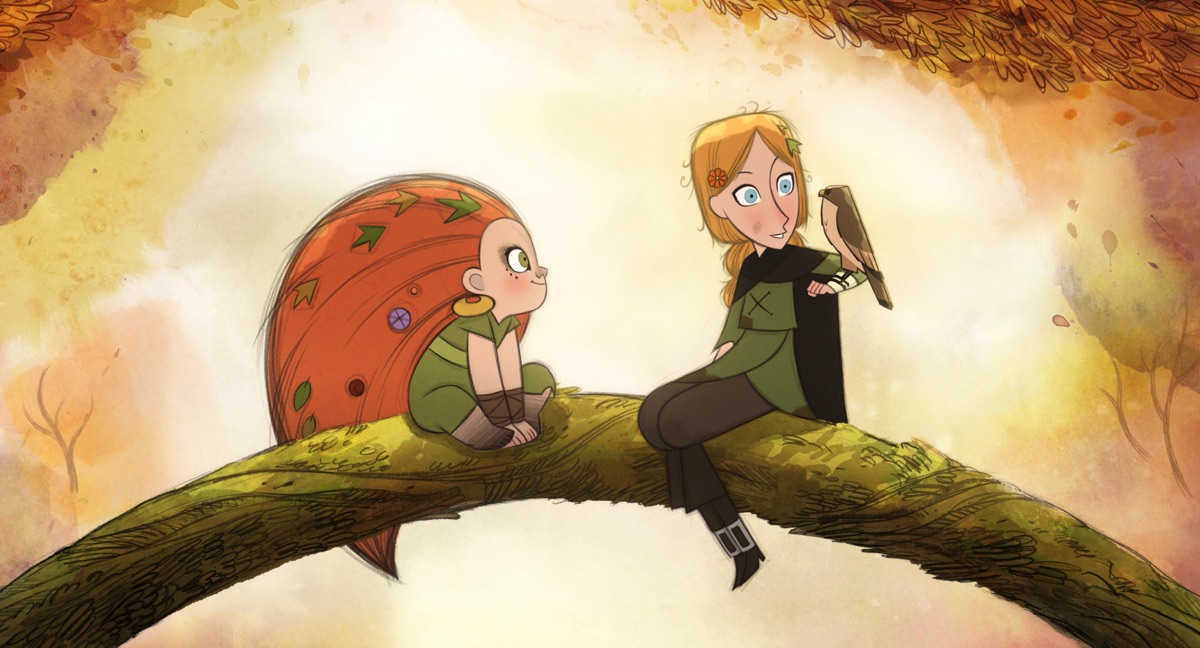 However, the town people would have a very uniform kind of woodblock line that showed their mindset. And then the forest animals and the Wolfwalkers would be more scratchy. And then Robyn changing from a town person to a forest person, her line work would change over the course of the movie. So not only would there be expressive line work to show how a character feels there would also be this gradual change in how we draw Robyn, which is something that I do see in comic books.

And we kind of threw it down to the clean-up department. Again, they’d been through a couple of films where their job was to make a perfect tight line around everything. But for this one, we wanted them to do each scene and each shot to think about what was going on for the character and where they were in their personal journey/arc in the movie, and think about that when they were drawing them.

Ross Stewart: It was the same for the backgrounds, too. When the layout line artists were doing the forest backgrounds, we tried to encourage them to be as scribbly and rough as possible, which is great if someone naturally draws scribbly and rough, but some artists draw in a very neat, tidy line, like singular lines. So we had to try and encourage them to get a little bit looser and maybe have a few whiskeys at lunch time, come back in and start drawing it.

We thought maybe it should come across as something that’s almost like a work in progress and the same thing for the characters too. They inhabit the same world, so there should be this underdrawing, this kind of sketchy lively approach. It helps to kind of have that liveliness and energy that the forest should have.

b&a: That’s so fantastic. I wanted to finish off with a question just about the way this story makes me feel. Like your other films, it’s so close to home for you. It’s an important story related to your home country. How do you feel about sending that message on to other filmmakers perhaps from Australia, from China, from elsewhere, just telling their own stories. I think that’s just such a big part of Cartoon Saloon, in general.

Tomm Moore: Well, I think it’s nice to see that we’ve had a ripple effect out into the industry. The first time I noticed it was after Secret of Kells, I was in Annecy, and someone was pitching their project and they said just that. I think they were Bulgarian or something and they were showing their folklore story and they said, ‘I want to do something like Secret of Kells,’ and I was like, ‘Whoa, that’s amazing that we inspired somebody else to do something like that.’

Ross Stewart: But really when you talk about say the Australian background, the Australian history, Wolfwalkers could easily have taken place in Australia with the colonial people coming in and the Aboriginal people with their own mythology and their own way of life. It’s focusing in on the personal, universal story of Robyn and Mebh, but really you could set it in so many different countries, in so many different histories. And there’s such a gold mine there of Australian history with the Aboriginal history. And then also with the colonising force. Someone has got to do it. There’s great stories there.