Including Chappie and the Lost in Space bots.

In befores & afters’ second ‘Body of Work’ breakdown, Image Engine artists highlight an area in which the studio has specialized over the past several years: robots!

Elysium was one of the first landmark CG robot efforts from Image Engine, with Neill Blomkamp’s follow-up Chappie seeing the studio enhance developments in hard-surface creations and actor-driven digital characters. More recently, Image Engine extended its robot work for Alpha 5 in Power Rangers and then for battling bots in the Lost in Space TV series.

Body of Work allows artists from the studio from different areas to explain their individual roles in bringing a specific effect to life; in this case, we have a compositing supervisor, FX artist, lighting and lookdev TD, texture artist and animation supervisor discussing the making of Image Engine’s variety of robot VFX.

From my end, it was an awesome challenge. We had to take a beautifully modeled and lookdev’d asset and destroy it in a very specific way to match Neill Blomkamp’s vision.

At the time the technology wasn’t there to do a full ripping metal sim, instead we had to work with upstream departments to make sure that we could fake the effect successfully. Animation did the initial reactions to the concussive hits from the exploding bullets, then FX would take over and begin breaking up the droid. This involved a lot of collaboration between ourselves and Earl Fast in Anim.

Then we went through a long process of breaking the asset up into small parts whilst maintaining some logical structure and allowing for the inevitable changes that we would get throughout the project. We broke the sim down into 6 independent sections so we could sim them in parallel. And if one bit was signed off on, we could leave that and continue working on the remaining parts without breaking approved work. Each wave of bullets needed to shred the body more and more so we needed to build in a lot of logic into the rig so that we could rerun it easily when we got new anim or asset fixes.

All that work needed to be passed to lighting so there was a lot of work done to ensure the data flowed correctly through the pipe. All in all, it’s one of the most satisfying shots of my career. We approached it in the right way given our limitations and adapted to change as it came up.

The whole team was so passionate about making it work at every stage it really shows. The level of detail the modeling team managed to achieve made it work so much better as it got to the FX dept. This care and attention to detail is what helps our team stand out. Another aspect that really helped was having such a close relationship to Neill and his team. It’s very unusual to be involved that closely at such an early stage that it massively helped the production and the ownership the team had on the project.

Image Engine had previously created robots for feature films, so that wasn’t really uncharted water for us. Chappie’s form bears a similar resemblance to the security droids from Image Engine produced for Neill Blomkamps’s previous film Elysium. So to a certain degree, we had a bit of a head start.

To undertake this challenge, the artists at Image Engine worked to create an asset that would stand up under multiple lighting conditions. Chappie is seen in various lighting environments throughout the film. Additionally, multiple variants of the Chappie asset needed to be created as Chappie’s appearance changes through the film as he is adorned with graffiti, damage and “bling”. Several other variants also appear in the film including police and the orange test droid versions.

Simultaneously our comp and paint departments prepped the plates for compositing. Although Chappie has human proportions, his anatomy is different owing to his robot nature, thinner waist, see-through neck and various other mechanical features. Some of the paintwork was fairly straightforward. There were clean plates (alternate takes of the same or similar action without the actors) or other references to draw from.

Other shots were extremely complex, involving painstaking recreation of actors or moving set pieces. An example is the scene where Chappie is following Ninja and Yankee’s characters into the dogfight arena. Once Sharlto had been removed, the paint artists had to reconstruct the actors walking in front of Chappie wherever they were revealed by the animation. This involved hand animating and warping cloth as well as rebuilding sections of the actors tattoos while they are walking through various light sources. This one shot alone took nearly two months to complete.

Our animation team did a great job of capturing the subtleties of Sharlto’s actions and lending that expressiveness to Chappie. There are multiple iconic moments through the film, but the carjacking scenes as well as the sequence with Chappie receiving his gangsta bling were certainly among the more memorable moments for me.

Chappie had a great dynamic that I haven’t experienced in other projects. Image Engine had already worked on two projects with Neill Blomkamp, and had a good understanding of his expectations. Additionally he was based in the neighborhood, so any questions could be quickly answered. We also got a surprise visit from Sharlto Copley part way through production which was a great acknowledgement of the work. This gave a great sense of ownership to the artists working on the project and everyone was very passionate about the work. 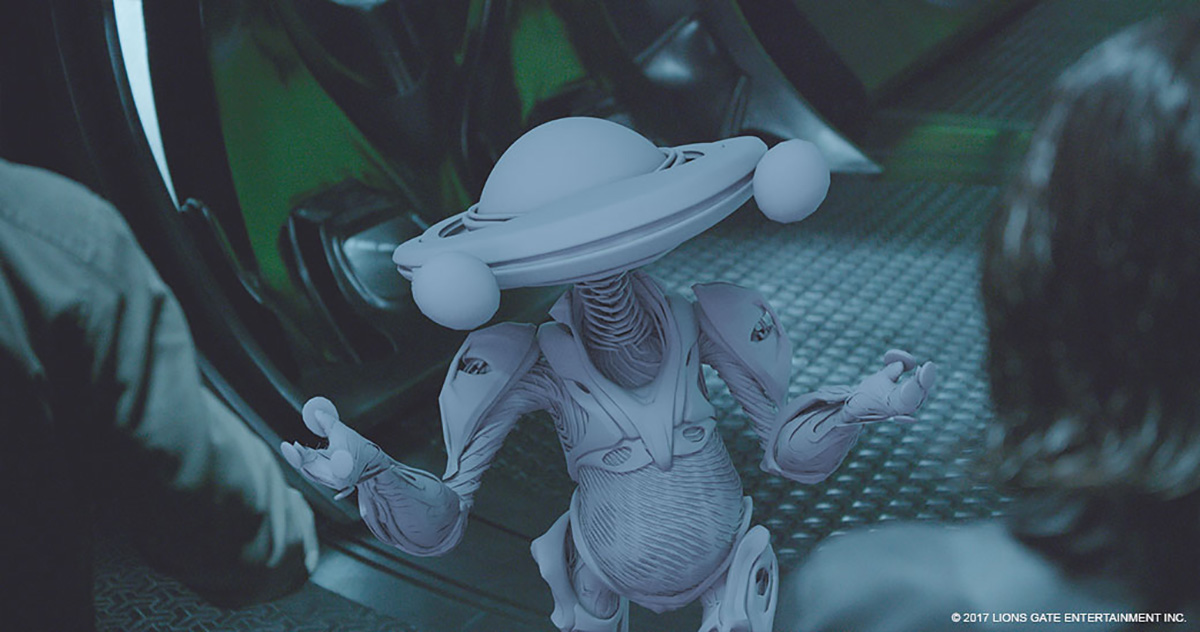 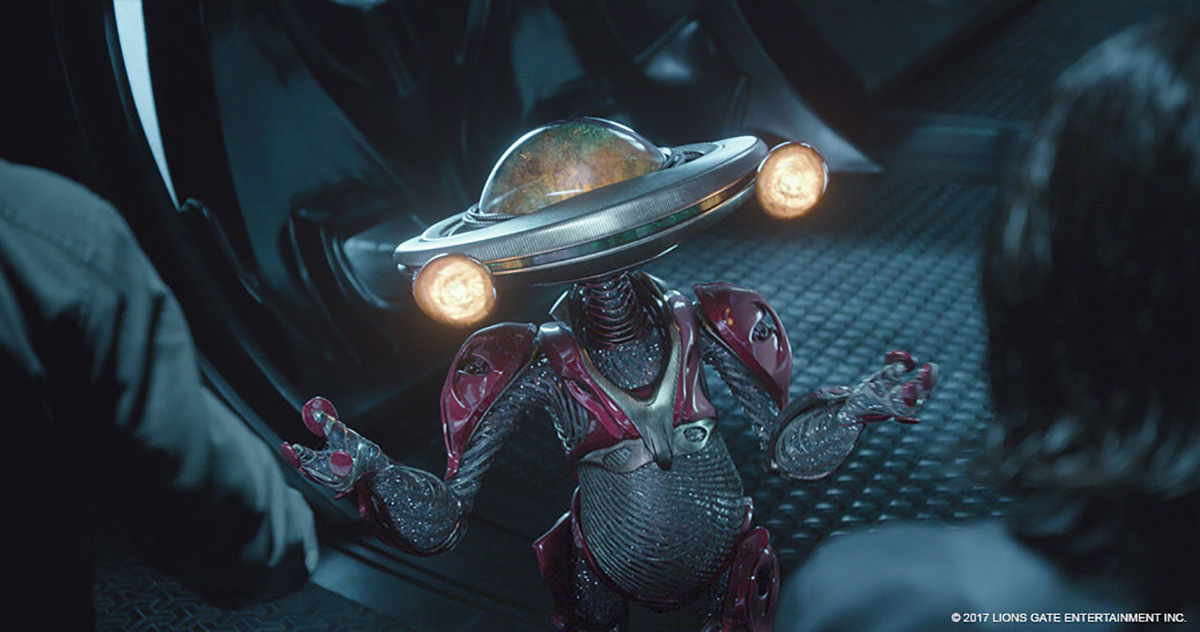 One of the more challenging aspects of creating Alpha 5 from the concept design was that his body is completely made of translucent glass and is essentially a light source of veins inside, as well as having a glowing volumetric nebula for a brain with complex neural networks and spiralling plasma eyes, basically one of your worse case scenario in terms of rendering complexity!

To top it off, his body had to stretch quite a bit so all those things inside had to come for the ride without issues! This was the hardest problem to solve, getting all of these elements to flow smoothly and automatically so that it didn’t have to be attended to per-shot or be tedious for compositors to use and adjust or fix, and I was able to achieve this by applying a lot of custom written shaders that would do these sorts of effects automatically instead of simulating this kind of stuff in FX per-shot or playing around with AOVs in compositing.

It took the whole team’s vast artistic talents and technical ability at Image Engine to pull this off so smoothly and above all else consistently. This is where Image Engine really shines, as the whole pipeline is extremely fine-tuned for fast iterations and turnaround times so we don’t need to waste time waiting or fixing the more tedious technical problems, the time is rather spent on iterating and enabling the team to be true artists.

My favorite scenes in the movie would have to be the ones where Alpha 5 first meets with the kids as two mysterious glowing orange eyes, to when you really get a first-look reveal after he extends his arms to grab them over for a close-up. You really get to see all the fine detail and complexity that went into Alpha 5 in an up-close and personal way. 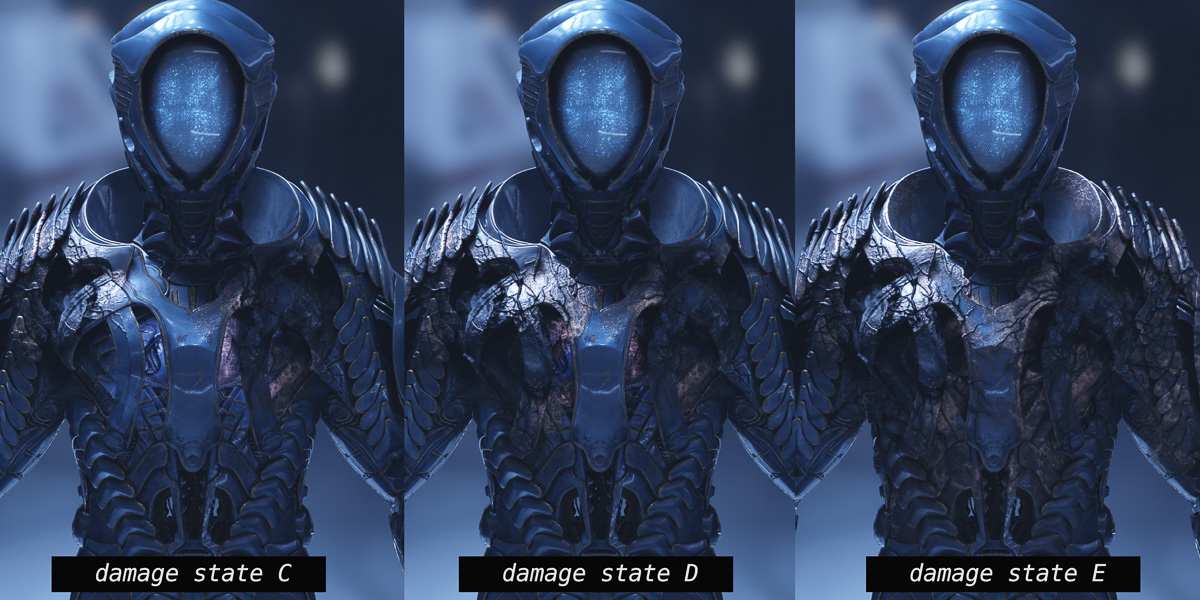 At the beginning of the project, conceptualizing and tracking the various robot damage states took time to organize and finesse. From an aesthetic standpoint, the damage states required a veining element that had to be incorporated and visible against the dark metal surfaces of the characters. Through several texture paint tests between texture and lookdev we were able to generate a look that could be transferred efficiently across the different damage states.

From a technical standpoint, each damage state had to follow a specific grouping to ensure they would be carried out sequentially in shot. To solve this challenge required render state preparation, proper pipeline set up and constant communication across various departments to ensure that the look was achievable, accessible, and translatable in production.

The fight sequence between humanoid and SAR on the ship was very memorable for me. Just being able to see every department’s work, from assets to animation to effects to comp, come together across this battle seamlessly speaks to the craft and artistry of everyone involved, both technically and artistically. Not to mention how much work and how many people are involved in a short sequence, let alone a film. I could not be more proud of how the final project turned out, but even happier to have been able to work on such an iconic show.

The creative environment which IE encompasses allows for dedicated and talented artists to work together, problem solve and bounce off ideas from one another. By providing the proper resources, an efficient pipeline, and direct forms of communication, the departments involved were able to work effectively to achieve the end goal.

One of the challenges we faced on season 2 of Lost in Space was accurately conveying the emotional states of many unique robots, who all had similar designs, but different personalities and goals. As our robots do not have facial features, nor significant vocalizations, we were reliant on our posture and movement styles to convey their intentions. This was an exciting challenge for our animation team.

From our clients, we had a strong understanding of the motivations and underlying thought process of our different robots (Thar, Phoenix, and the robot horde). We needed to convey the disruption of loyalty starting to affect Thar’s horde as Will’s ‘robot whispering’ ways start to sway them, and Thar’s emotional reaction to intervene before that took place.

Our animation team used this information to act out the beats, breaking a militant uniformity into a more offset/confused pattern in the hoard, while Thar amped up the aggression through raising his spikes and becoming more of an overpowering figure in frame. A combination of posing and movement choices separated the styles of Thar (powerful/militant) and Phoenix (wild-west gunslinger/self-sacrificer) during their final battle.

My favorite shot is in the season finale, when Thar gives Phoenix a thorough beating, resulting in him landing in a pile on the floor, with a final, disrespectful head stomp. Even after this severe beating, you can still feel the drive within Phoenix as he lifts his head to check on the Robinsons, mustering the last of his strength to attempt to save them.