Puppeteering the puppets of ‘The Dark Crystal: Age of Resistance’.

The announcement that The Jim Henson Company would be partnering with Netflix to make a prequel of The Dark Crystal as a streaming series – and that it would involve the use of, like the 1982 film, puppets to help bring the characters and creatures of Thra to life – was warmly greeted by audiences around the world.

While there is a significant amount of visual effects work in The Dark Crystal: Age of Resistance (handled by DNEG), the puppet fabrication and on-set puppeteering was an extensive process. Indeed, 20 main puppets and scores of other secondary characters made up the scenes, with a core team of 12 puppeteers operating them during the shoot at Langley Studios near London.

To get a sense of what was involved in that puppeteering, befores & afters asked puppeteer Olly Taylor what it meant to be on the very busy set, often with several puppets (and even more operators), how the puppet mechanisms worked, and what wearing layers and layers of clothing and mechanisms felt like day today.

How it worked on the set

When he was puppeteering a Skeksis character – Taylor’s main performance was as The Scientist – the puppeteer was concealed inside the costume of the puppet. The set floor was actually removed, which means the set sat about four feet off the floor. Then there was a false floor about two feet high. With Taylor’s six foot stature, the result is that The Scientist sat around four feet tall.

In terms of operating the puppet, about two-thirds of Taylor’s body was completely within The Scientist. “My right hand was in his head and then my left hand operates his left arm,” details Taylor. “Then inside there was an assistant puppeteer, who’s quite literally tucked under my right armpit, and the whole Skeksis is strapped to my back.” 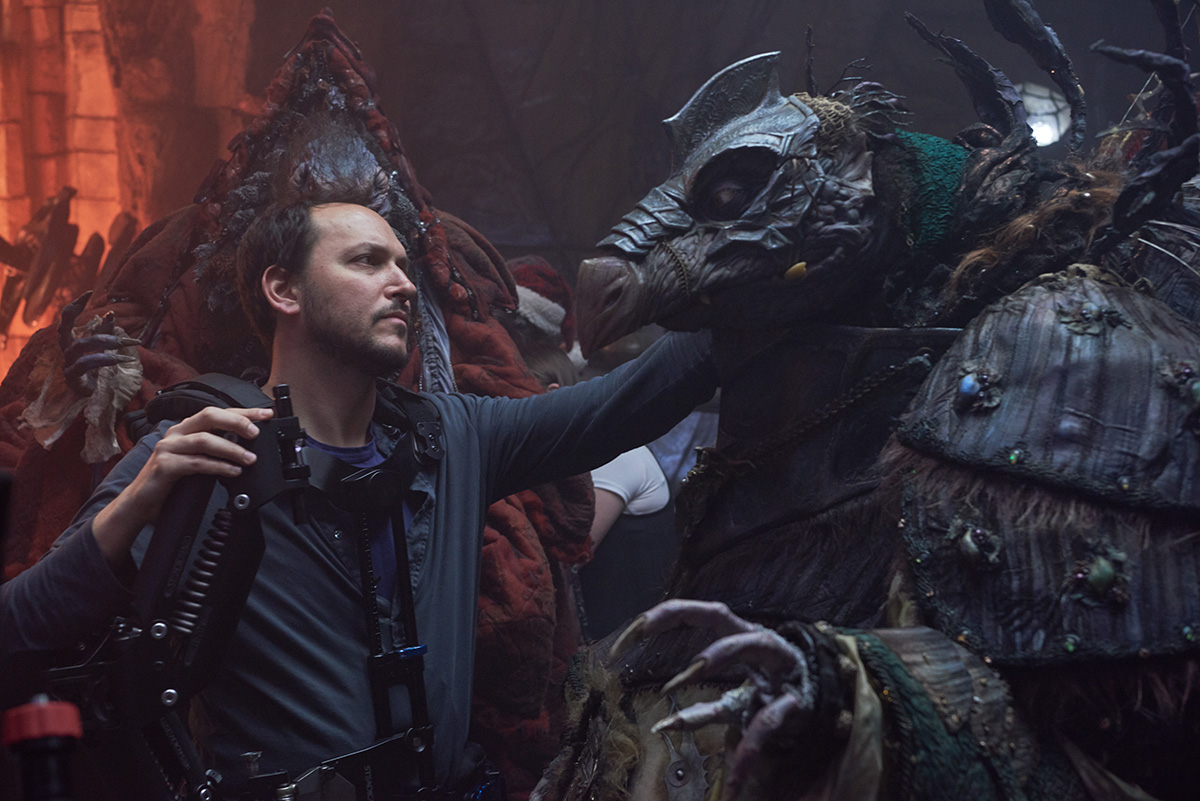 Director Louis Leterrier orchestrated the shoot so that the action was generally filmed with two cameras, including a Steadi-cam. The puppeteers could see the footage – live – on a monitor in front of them. This aided in checking their performance was working.

“You’ve got two shots on your monitor, which are both moving,” says Taylor. “And on top of that we also had witness cams. We had a couple of cameras on the set that were just like sports cameras hidden in the rig above us or by a door somewhere, which gave us an overview of where the character was in the set. So that if on the Steadi-cam we come into shot and the camera moves onto somebody else or another piece of the action and you lose yourself, you’ve still got a reference.” 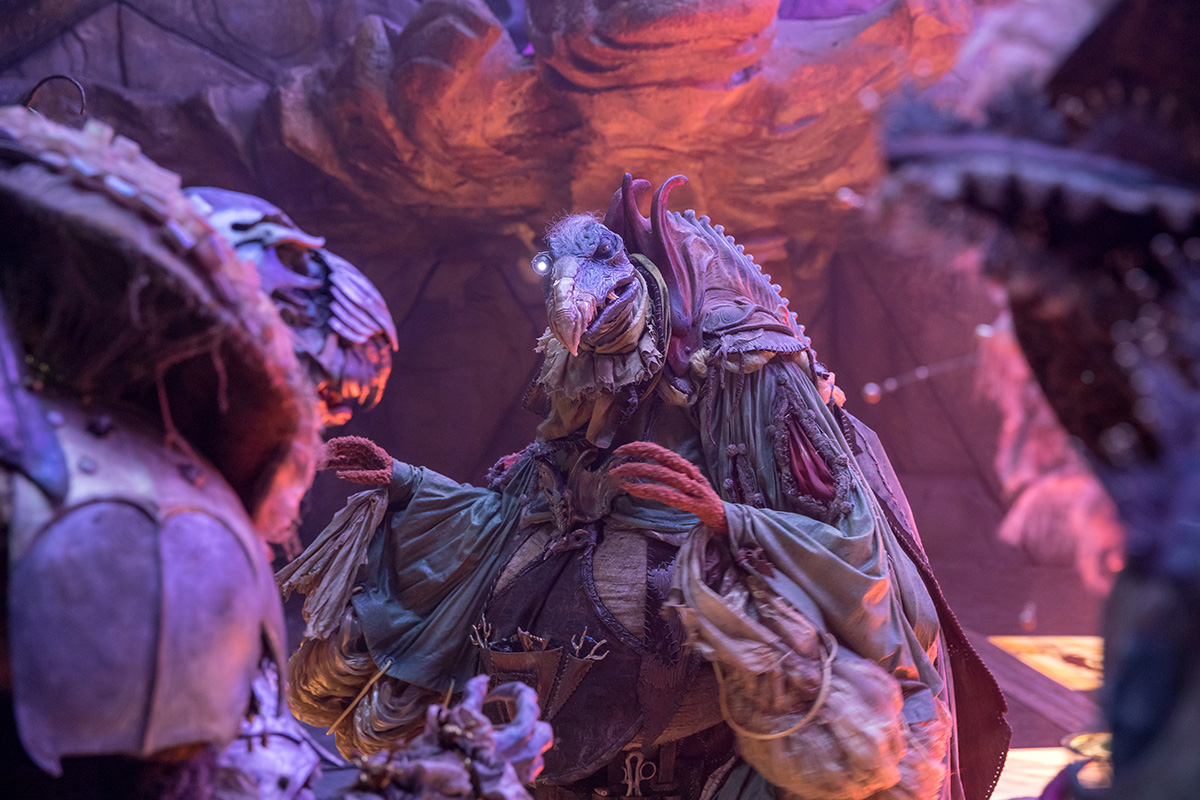 That ultimately meant the monitor provided a quad-split for the puppeteers; four shots of different compositions to keep track of. “On top of that,” continues Taylor, “you are wearing a microphone and you’ve got an ear piece so that you can both hear Louis and other directions, but you can also hear the puppeteer who’s next you, who is on a com system.”

If that wasn’t already enough going on during shooting, there was also an outside puppeteer who would be operating any peripheral animatronics. “In the case of The Scientist,” details Taylor, “I’ve got a puppeteer who is working the eye mechanism and the brow. And they have to be able to hear me as well, and they can talk to me. They are watching a monitor offset to the side.” 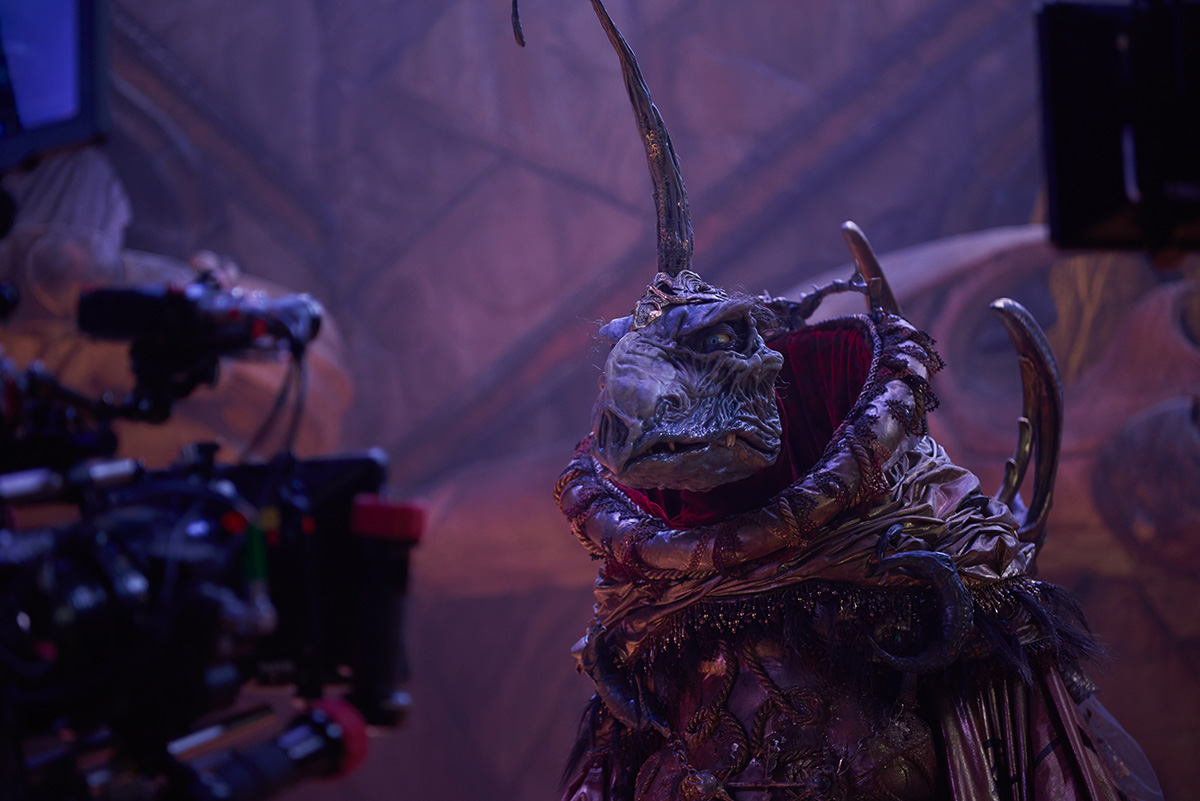 “So, there’s a lot of technicality. And of course, you need to have learned all your lines like any other actor and deliver them with the correct kind of delivery whilst navigating all this technicality.”

It wasn’t just keeping track of all the action, the technical side of things, and performing the lines, adds Taylor. It was also dealing with, in the case of The Scientist, the sheer weight of the costume he had to wear. 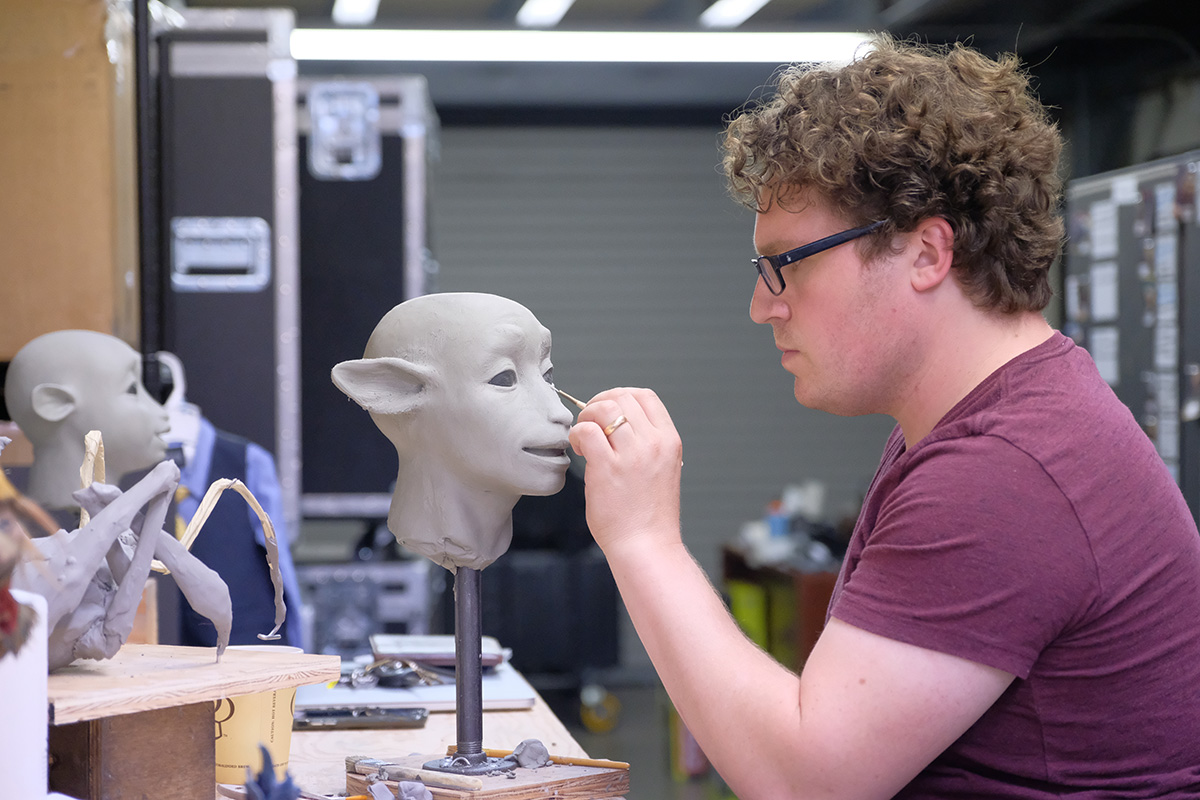 “The Skeksis do like a lot of costume, they’re very fanciful in what they wear. And these costumes are made as if you were wearing them as an actor. They’re very sumptuous. If it looks like it’s very plush, then it is. It’s got several layers of fabric underneath it, and the details. Obviously, it’s like wearing several layers of bed covers over yourself with another human being in there.”

“The heat in there generates very quickly,” says Taylor. “Then there’s the fact that you’ve got your arm above your head, and unless you’re a puppeteer, most human beings don’t walk around doing that in their daily life.” 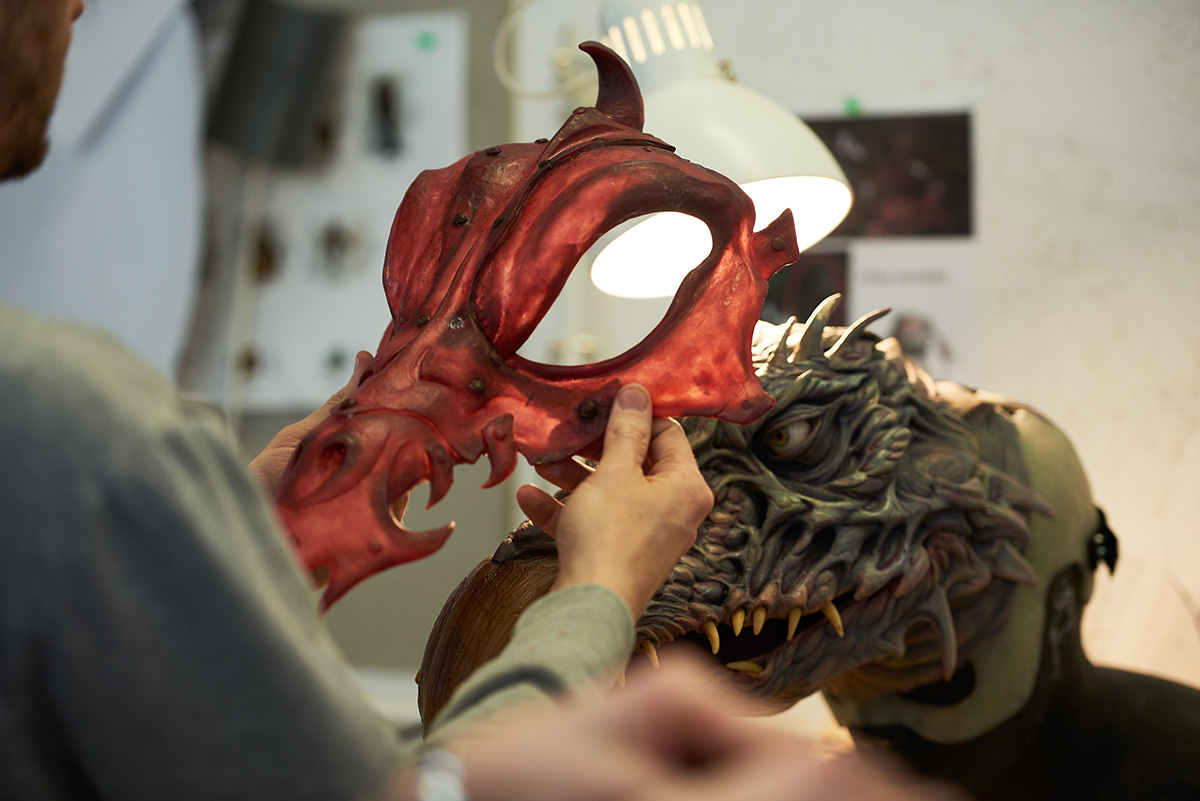 Although the characters in Age of Resistance were ultimately voiced by actors such as Taron Egerton, Alicia Vikander and Mark Hamill, on set this was of course done by the puppeteers themselves, while also controlling the puppets. Taylor himself spoke lines for nine characters, with his most prominent character being The Scientist.

“The Scientist is a very wound up, uptight character,” notes Taylor. “I always feel that he’s kind of in middle management. He doesn’t want to be the emperor. He wants to please the emperor and yet get all the praise that’s coming from all the other Skeksis. But at the same time he recognizes he has a level of genius that maybe even the emperor doesn’t have, but you have to temper that so that he doesn’t step out of his place in their own hierarchy.” 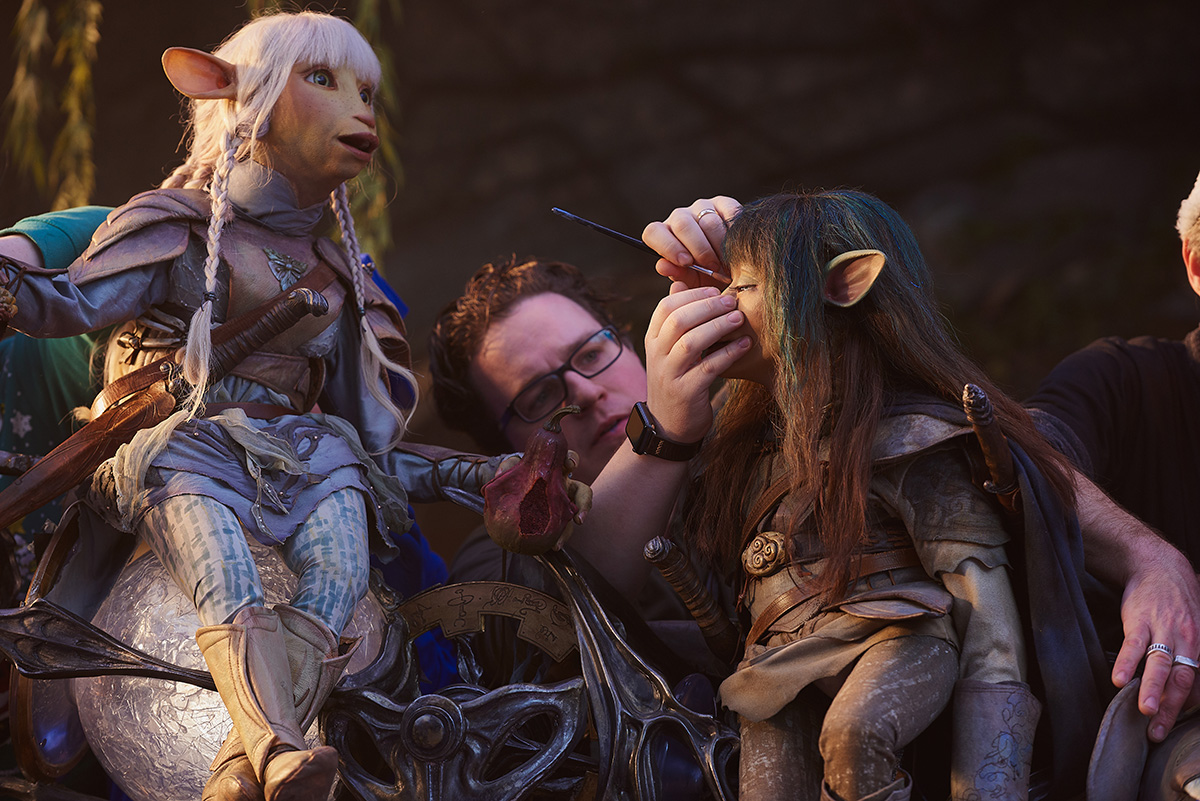 “So as a result,” adds Taylor, “he’s got frenetic energy that he’s bottling up. He’s almost got a British tick to him and that he’s suppressing rage all the time. That gave him a snappy way of moving and that sort of energy that I always like to have with him.”

As noted, Taylor performed other roles, too. For the Mystics, all the same technical set-ups as The Scientist were necessary, but this time it was performed in a squat position. As The Archer, Taylor wore vision goggles. “They’re akin to what people wear for flying drones and that kind of thing. The goggles completely enclose your eyes. And in those goggles, again, I’ve got a quad split of four shots that I’m watching.” 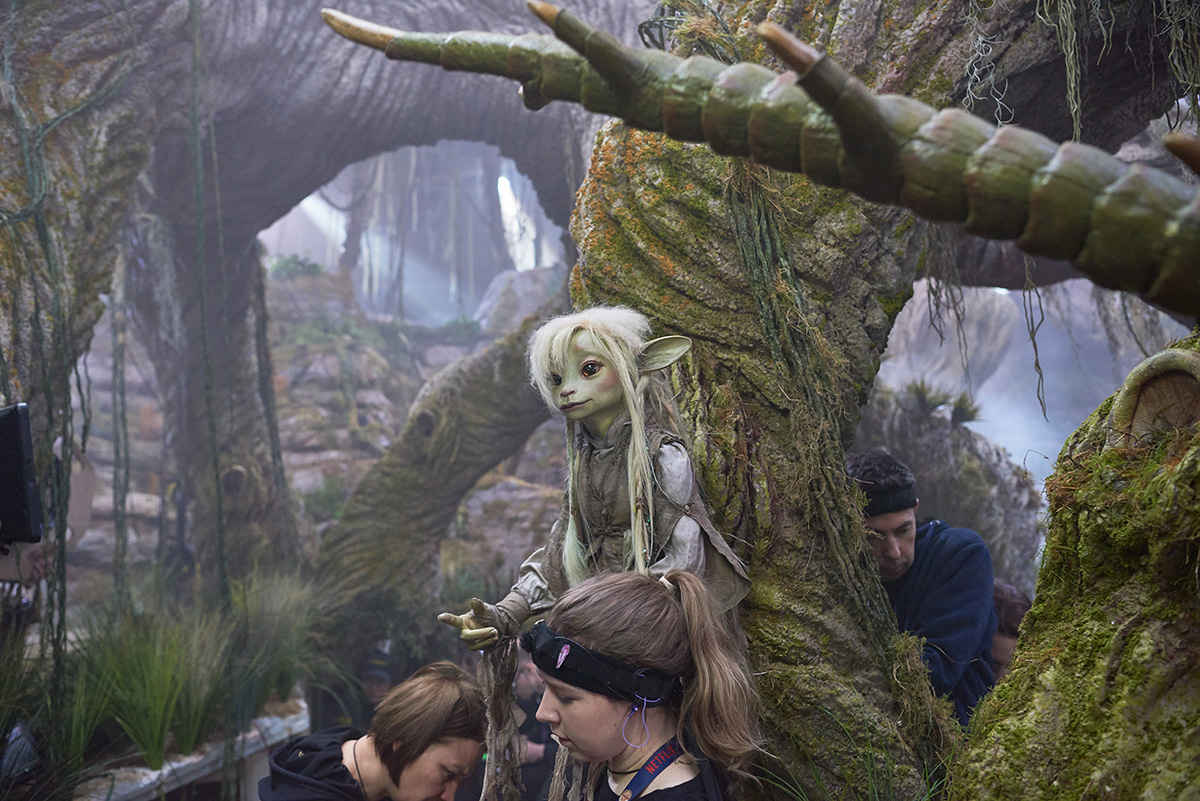 “Then there are times where the Mystics have four active live arms. So there’ll be three additional puppeteers around me that are attached to me whilst I’m in this squatted position bearing the weight of the whole thing. Then there was another on the remote control, peripherally.”

Gelflings in the series were puppeteered differently, simply because they are smaller in size. They were hand-puppets, so the puppeteer stood on the studio floor up against the false floor that was four feet high. “Unless we were doing any long wide shots, the Gelflings were cut off at the waist,” explains Taylor. “They have rugged arms which sometimes have mechanisms there to move the fingers, and then on some of them we would have controls to operate the facial features themselves. Other times the facial features would be controlled remotely.” 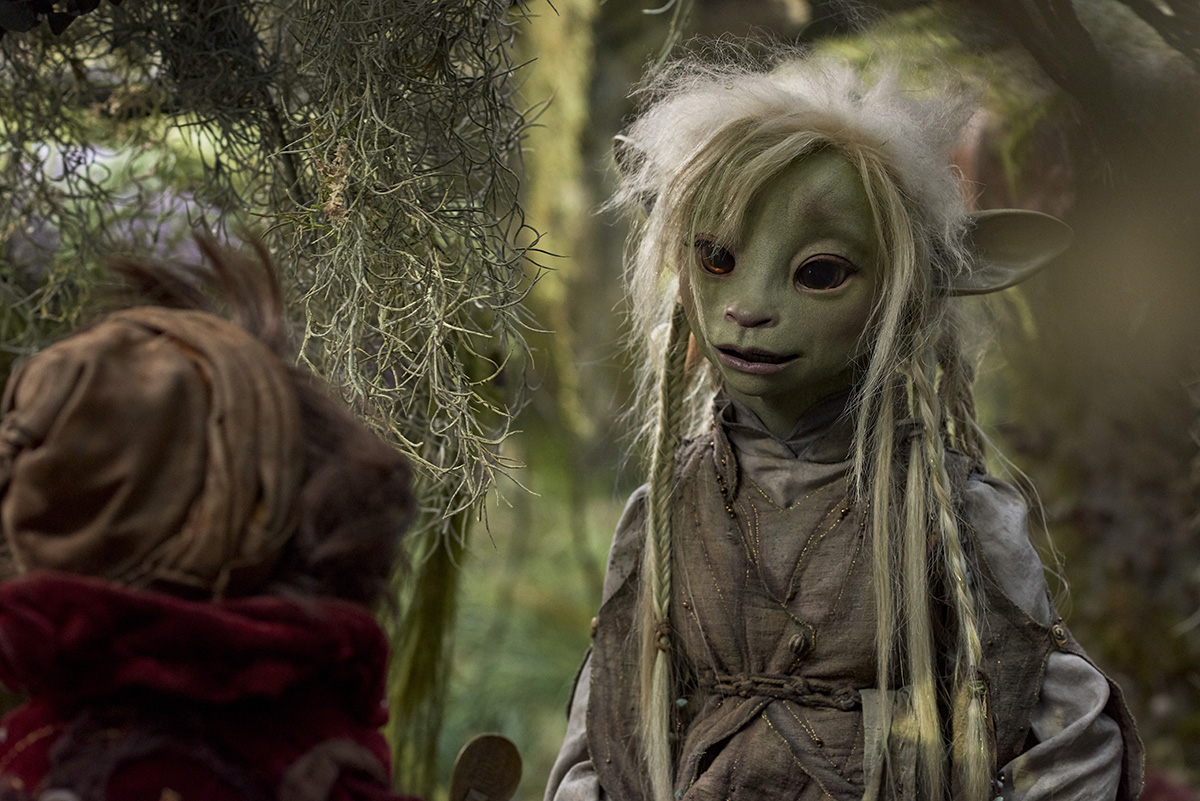 For Taylor, his Age of Resistance experience was an incredible one, and he praises the artistry at Henson and the ability afforded him to continue in an acting/puppeteer role.

“It was a great challenge as a puppeteer,” he says. “Puppetry, after all, is an expression. It’s the skillset by which we express our performance, our acting. And where would you as an actor get this ability to play such a contrast of characters, all in one show? As well as the technicality of puppetry, there’s this whole other performance side where you have to deliver a plethora of characters, and in the instance of The Dark Crystal, it’s proper drama.”