A deep, er, dive into the art of in-camera screen graphics for the submarine film, ‘Le chant du loup’

You’ve seen it many times – actors pointing at, clicking or tapping a screen, and reacting to the myriad messages or graphics that pop up. Sometimes these actors are looking at a whole lot of nothing and have to imagine what might go there in post-production.

That wasn’t the case, however, in Antonin Baudry’s French submarine tale Le chant du loup (also known as The Wolf’s Call). Instead, the actors had the chance to interact directly with elaborate screen graphics crafted by Territory Studio that were played back in real-time on the submarine sets.

These screen GFX, which include depictions of sonar, sonograms and weapon firings – Wolf’s Call is a term used to describe the sound a torpedo makes as it moves through water – were designed to have an authentic military feel, and to work directly for in-camera capture during filming. It was a massive feat that involved working on the screens before and during production, and then facilitating live playback.

In this visual recounting of the process, befores & afters showcases how the GFX were produced, with commentary from Baudry and Territory Studio creative lead Sam Keehan.

The importance of in-camera screens

Let’s start with what it ultimately looked like inside one of the submarine sets while Le chant du loup was in production, as shown above. “My first inspiration for this film came from when I embarked on a submarine myself,” notes director Antonin Baudry. “I was surrounded in the room by all these sounds and visual representations of sounds, and I found it beautiful. And I really wanted to give the audience the same feeling I had.” 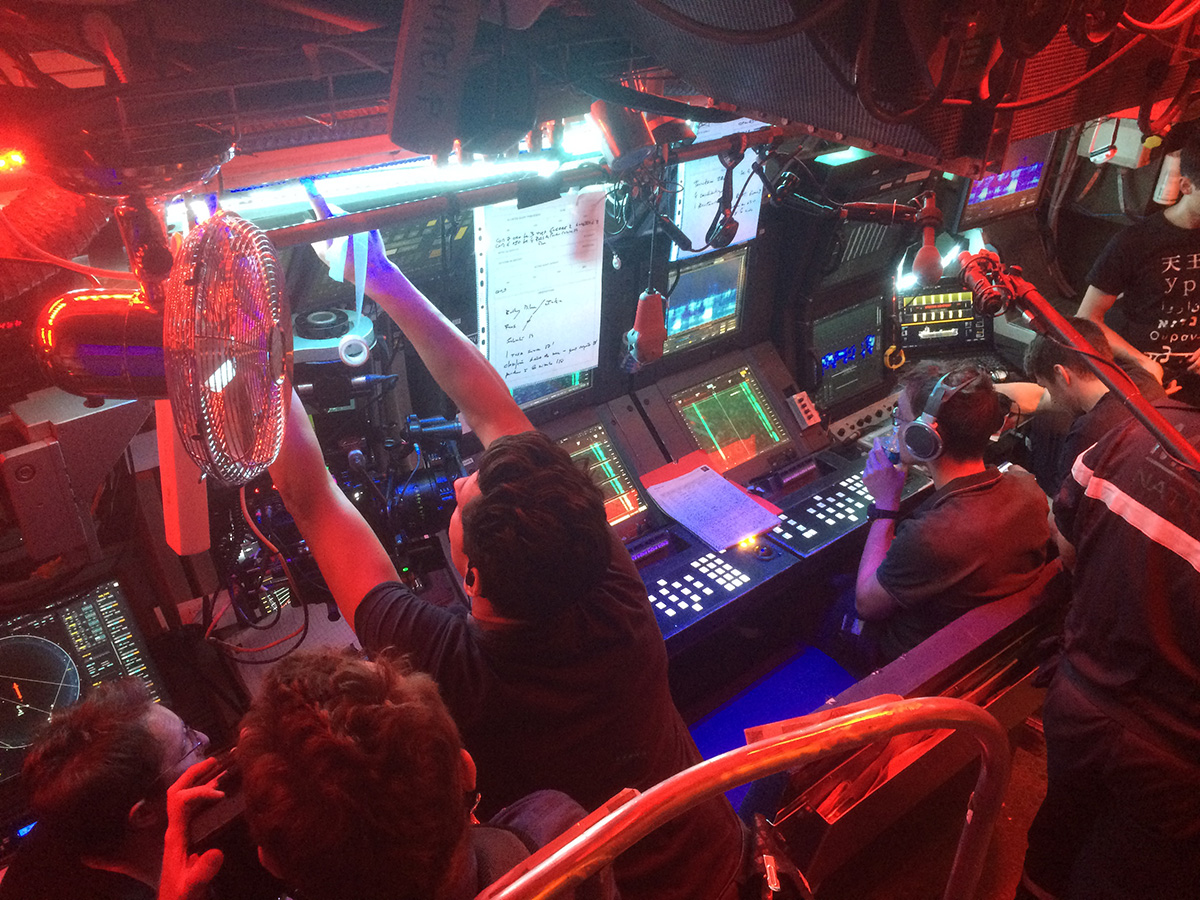 “I didn’t want these screens to be part of visual ‘post-production’ effects,” adds Baudry. “I wanted to surround the actors and characters with the same poetry that I had seen and observed when I had embarked. Another option would have been to shoot everything with greenscreen, or black screens, and then do post-production on them. But I really thought it was part of the spirit of the film to have the screens all around and be part of the setting. I wanted them to really see and act and interact with what they were seeing because the sounds that they’re perceiving in the submarine are the sound of threats, or in a way, the launch action. So it was important for me to have them interacting with something that was real.”

Researching the look of sound 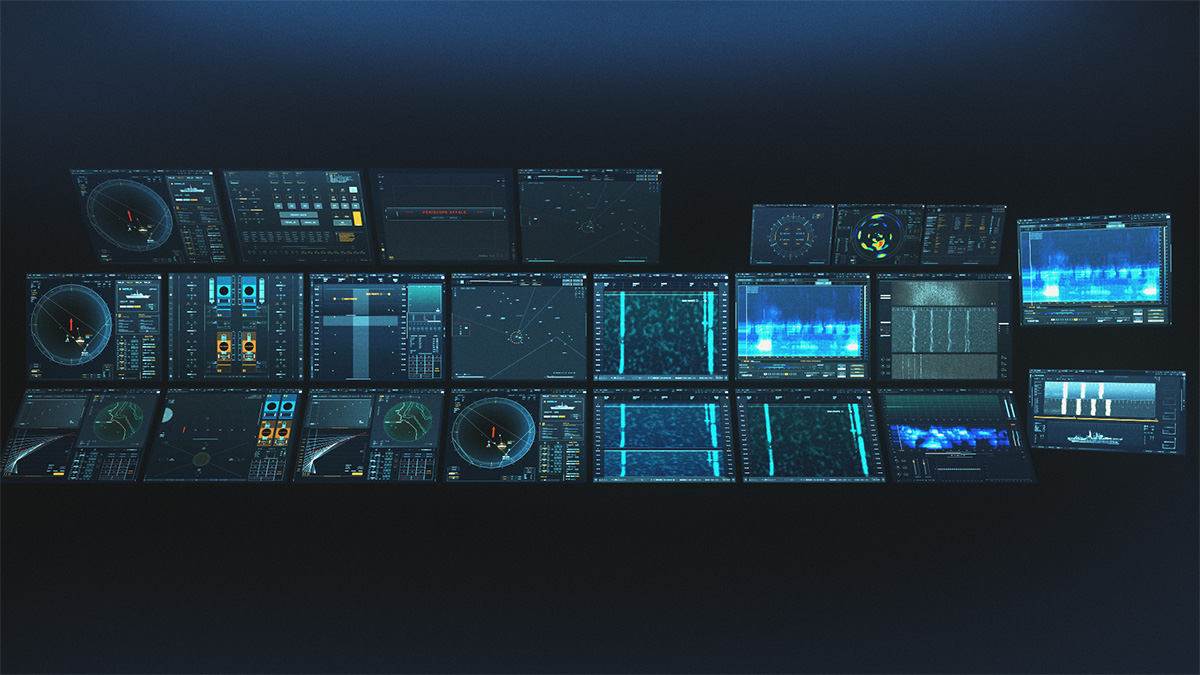 This image above represents a visualization of how the final screens would look once implemented onto the on-set screens. But getting there would involve significant R&D, starting with Baudry’s own experience. “I was lucky to be able to spend a lot of time inside an actual French submarine, and in a simulator, which is the training machines that they have on land,” he says. 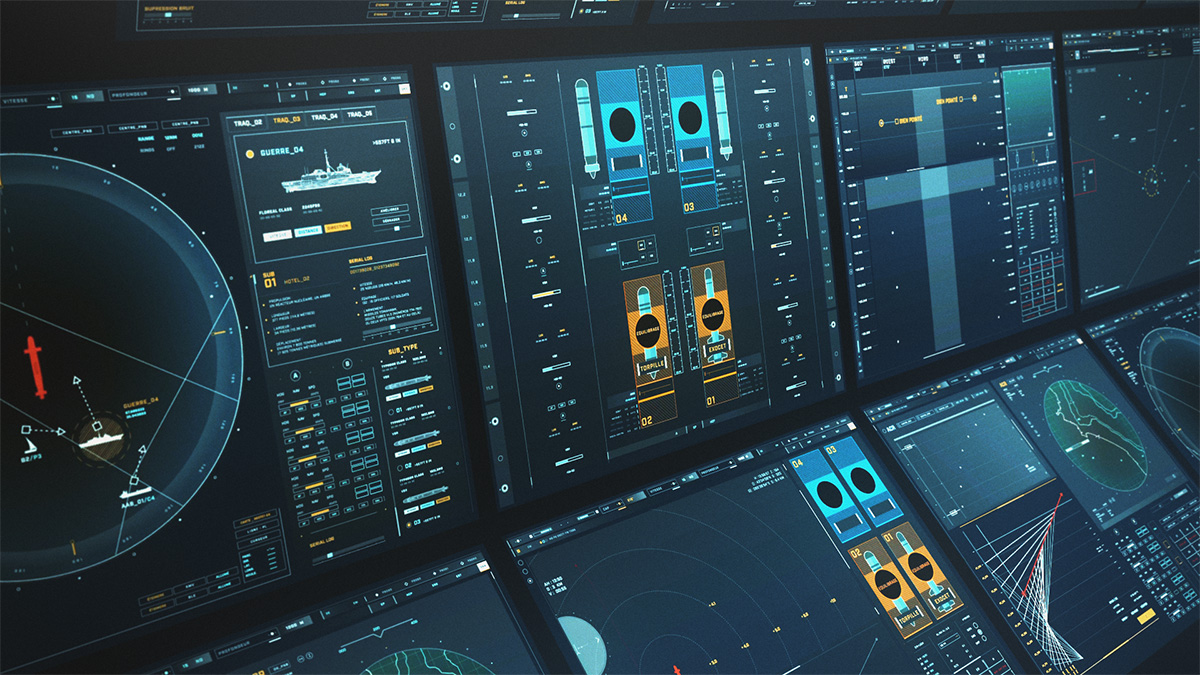 This frame is another of Territory’s visualization of the eventual screen layout. “We would try to get the actual sounds of the machines and the way the sounds were displayed as close as possible as what they are in the reality in the current submarines of the French Navy,” details Baudry. “What we did as research was to look for some sounds that were interesting and then look at a representations of them from the machines that my sound people have, and then give that as material to Territory to get inspired by or to actually use them.” 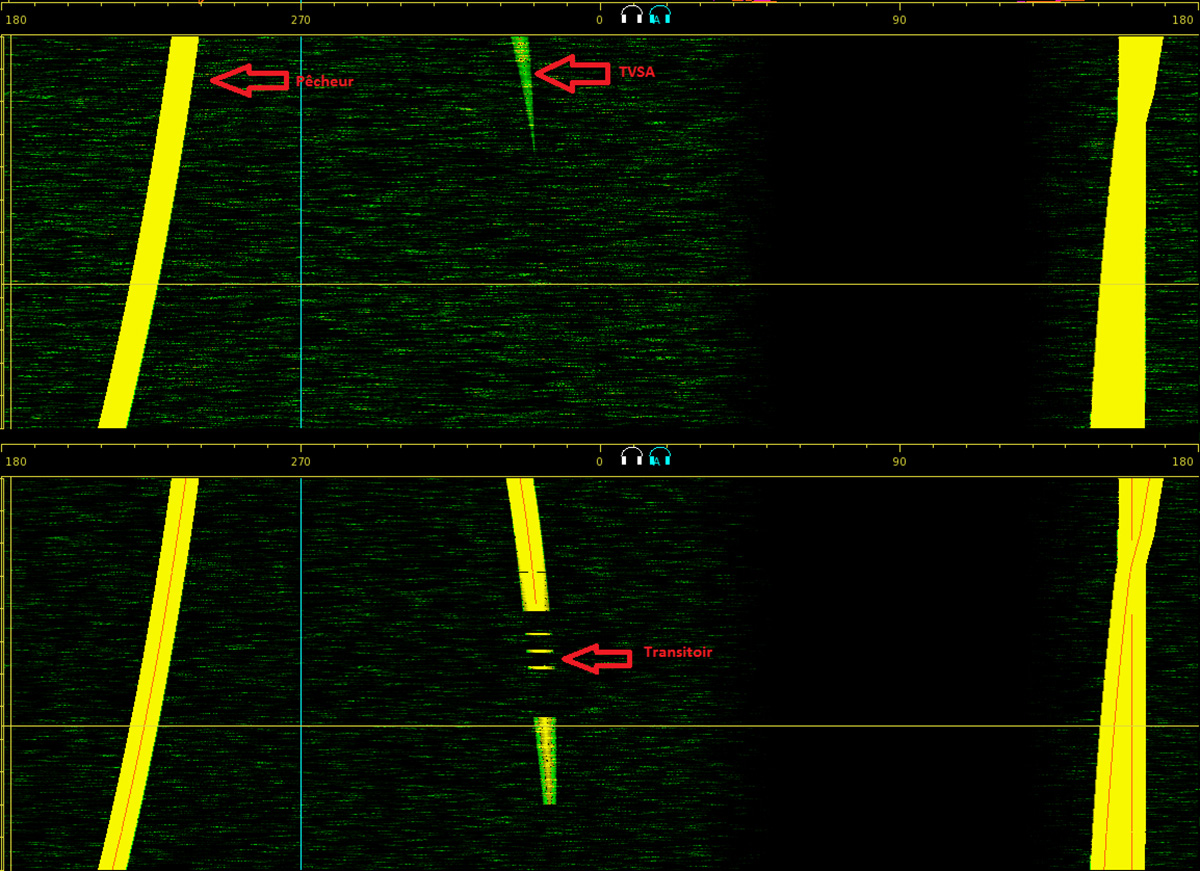 This screen with the yellow markings shows a training program that was provided to Territory – in redacted form – to specifically understand the role of the Golden Ear (who is an audio specialist on board and the main character). 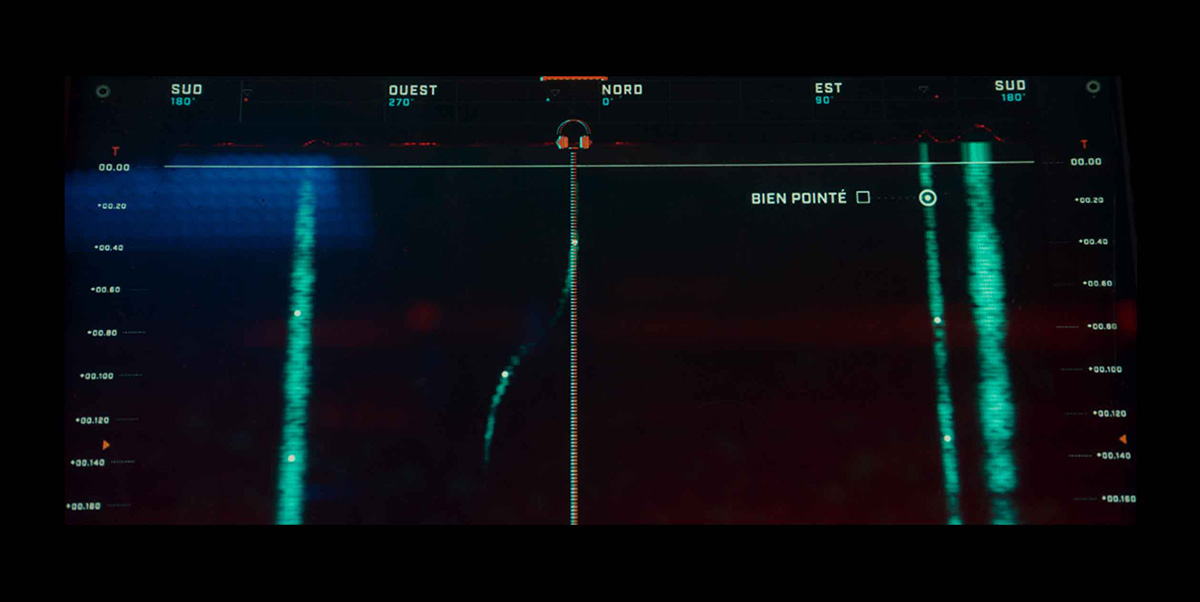 That training program directly influenced the above sonar screen. “We weren’t able to see any of the actual graphics that would appear on these screens [from real French Navy submarines],” notes Territory Studio creative lead Sam Keehan, “but through our discussions, I think we came to a very nice interface and one that worked quite well for the purpose that we needed it for.” 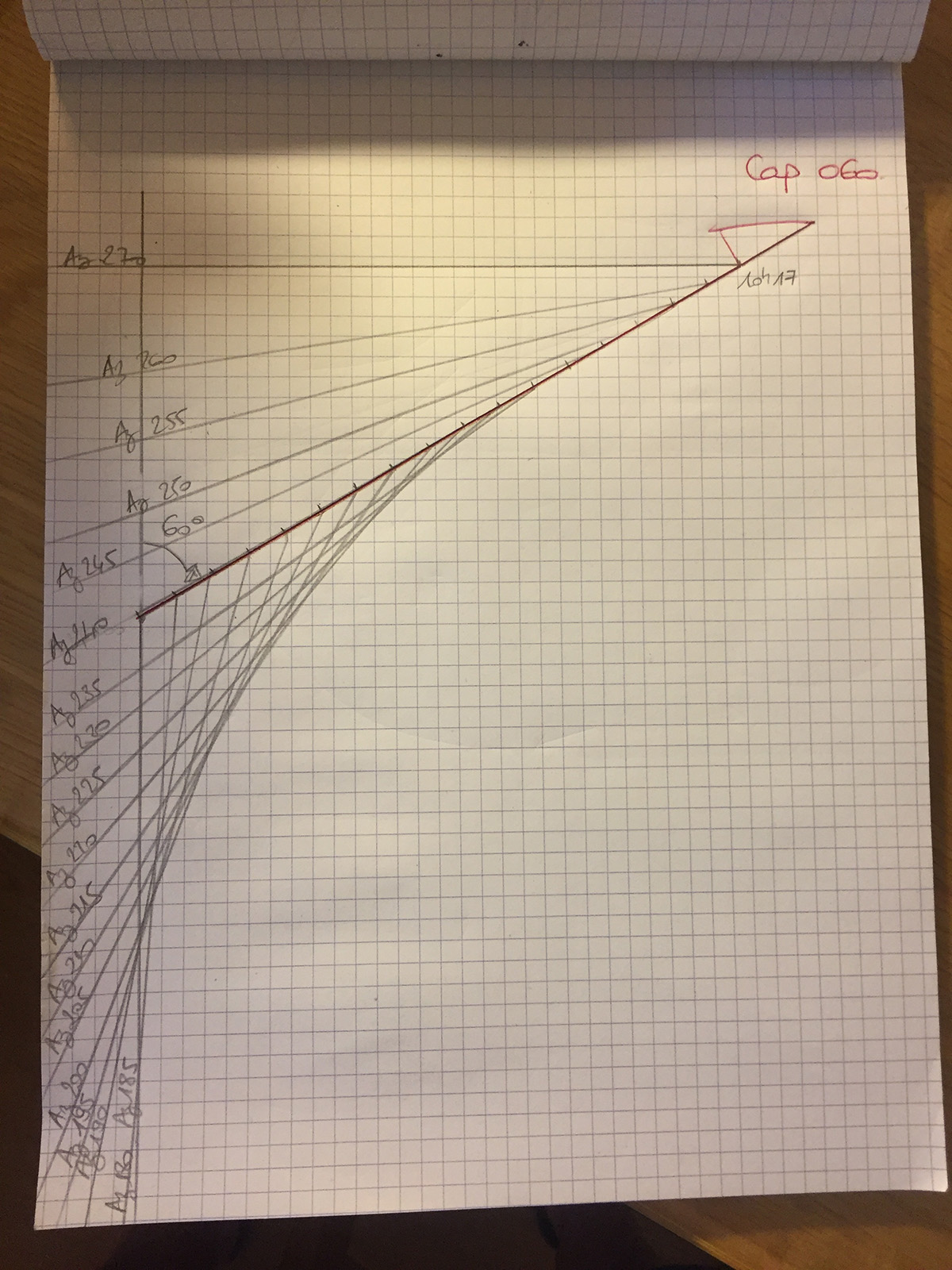 “The references I was given were sketched out on graph paper (shown here) while in discussion with the consultant or those extras who were experienced submariners,” continues Keehan, in relation to how Territory arrived at some of the look and feel of the screens. “In discussion about story beats they gave me indications and explained the theory behind how sonar and radar technology is interpreted as visual sound signatures on screens, and how those systems and screens work together. Using these sketches I would work up a screen and with instant feedback make changes as needed. As the shoot progressed I got to understand the technology better and able to work more effectively to deliver generic and specific screens.”

The screen above is one that perhaps directly translates from the graph paper rendition offered to Territory.

Meanwhile, the filmmakers also benefited from direct consultation from experts. This behind the scenes photo, above, is an example of a typical briefing session where, says Keehan, “we would discuss a story beat and how to visualize it. The consultant would explain the action while he sketched it out as a graph and once I understood what the animation needed to show, would work that up.” (From left to right, director Antonin Baudry, Michale Eden from playback company Revolver, Sam Keehan and the consultant) 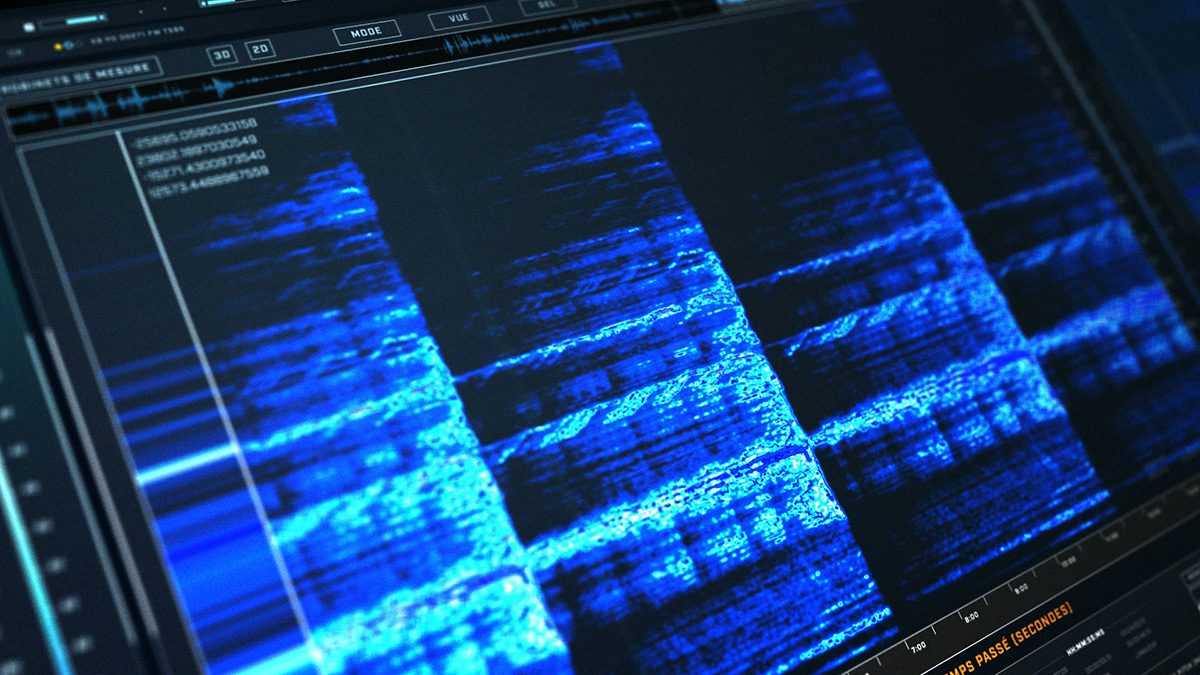 Above, a sonogram screen as seen in the film. “We worked really closely with the sound team, particularly with the sonogram screens where you get a really beautiful pattern that emerges with the sound of the Wolf’s Call,” describes Keehan. “That’s based off sound software and how it picks up and visualizes sound itself. Even just looking at waveforms and more simple versions of these sounds, is already quite beautiful. And then when you put a sound through that, it just produced that beautiful pattern. 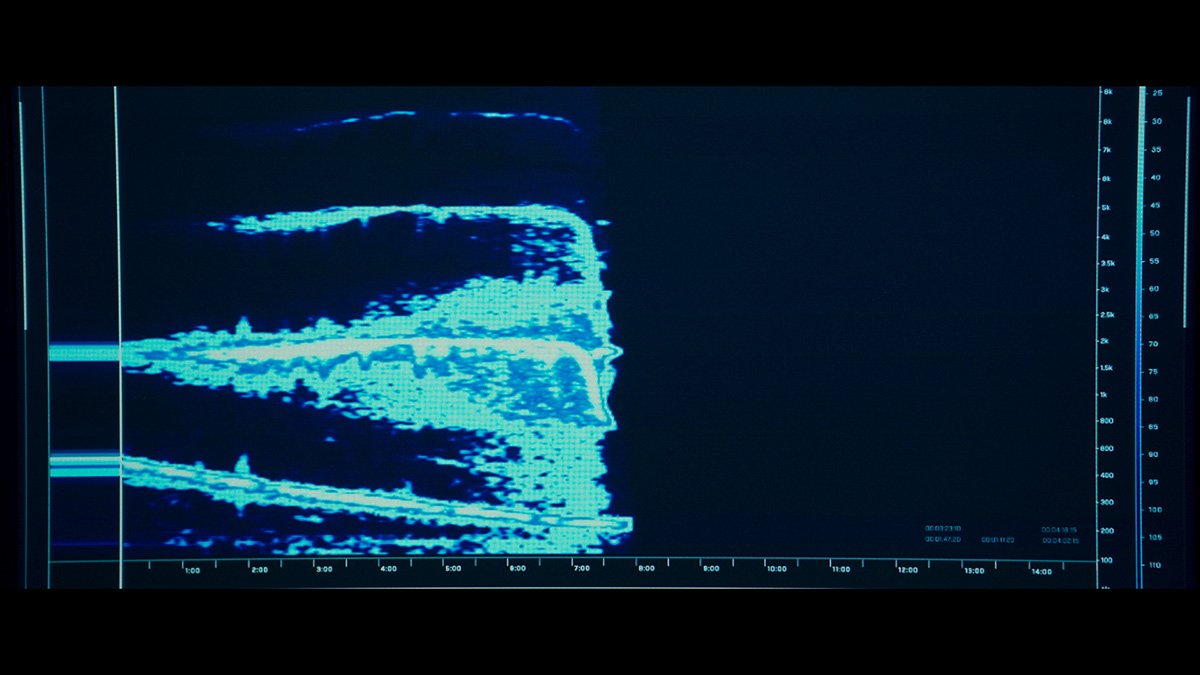 The Wolf’s Call visualization on one of the screens. Territory used Adobe Illustrator for designs, with animation done in Adobe After Effects, and Maxon’s Cinema 4D used for schematics. Initially 400 to 500 renders were crafted, but these were sometimes re-rendered on set with changes. 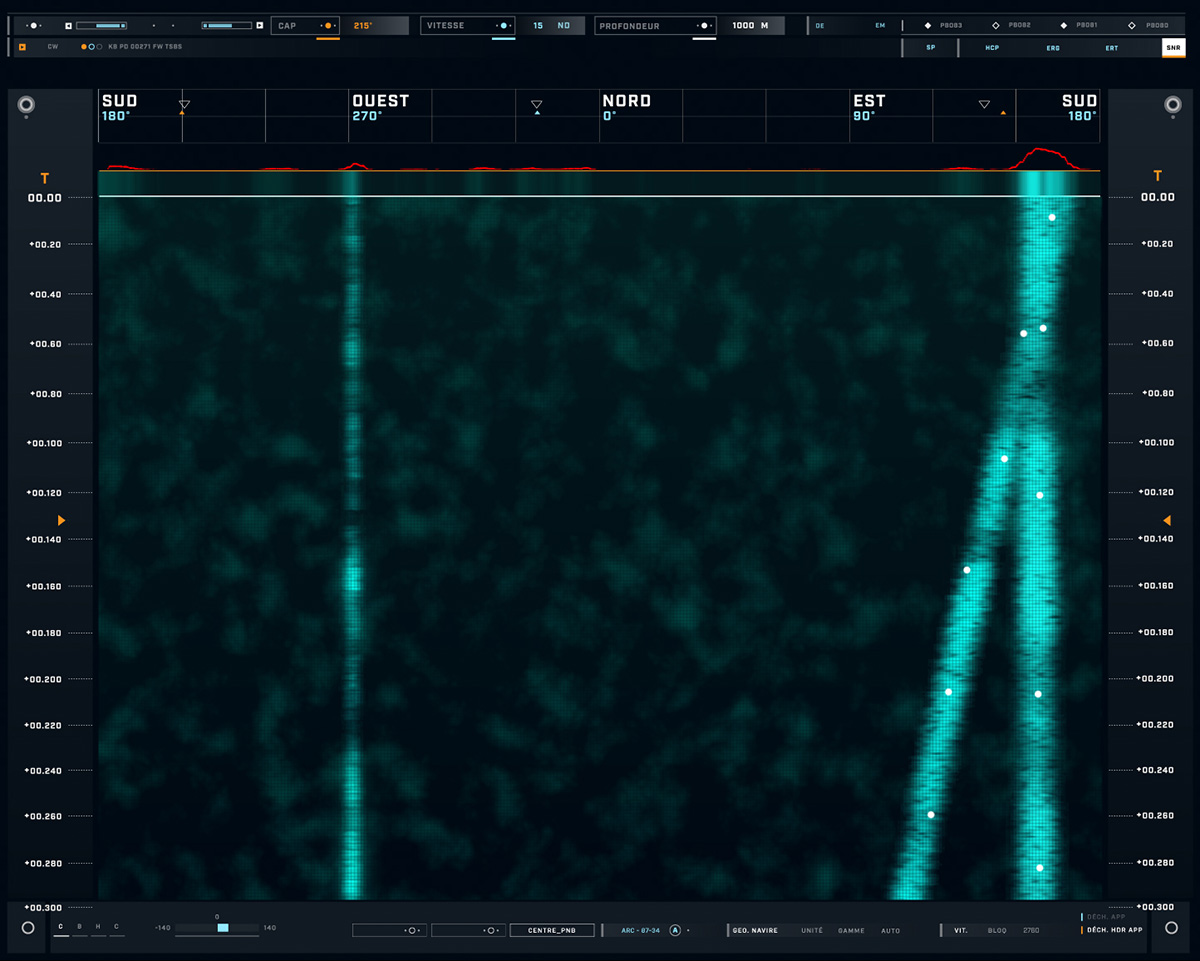 “This screen illustrates the visual system that interprets the raw data,” explains Keehan. “It was the biggest challenge to get right. It shows raw data in descending chronological order on a curve. For a layperson like me, it is such a counter intuitive way to analyse data that it really took some time to appreciate. As a hero asset in shot with the Golden Ear, we had to find a credible way to recreate this on set. We used AE to build a sonar screen and it was a really unusual way to make AE work. We created a large scrolling file that allowed content to drop off the bottom and fill from the top, creating an expression on the top and bottom of the screen to suggest that the data was animating vertically when in fact it wasn’t – it was just revealing predetermined data that was essentially scrolling down.”

The art of on-set playback

Above, how the outside of the set appeared. “Our playback team was great – it was Revolver from Sheffield,” says Keehan. “What we set up was a very interlinked system. On a submarine, you get the raw data in on the sonar screens and it starts to be passed around to other screens that elaborate on that information, or dissect the raw information that comes. And it was very important for Antonin to be able to see that in action. So what we made were elements that could be played back by the playback team on screens, through their linked system, that made it look like everything was reacting to that raw information.” 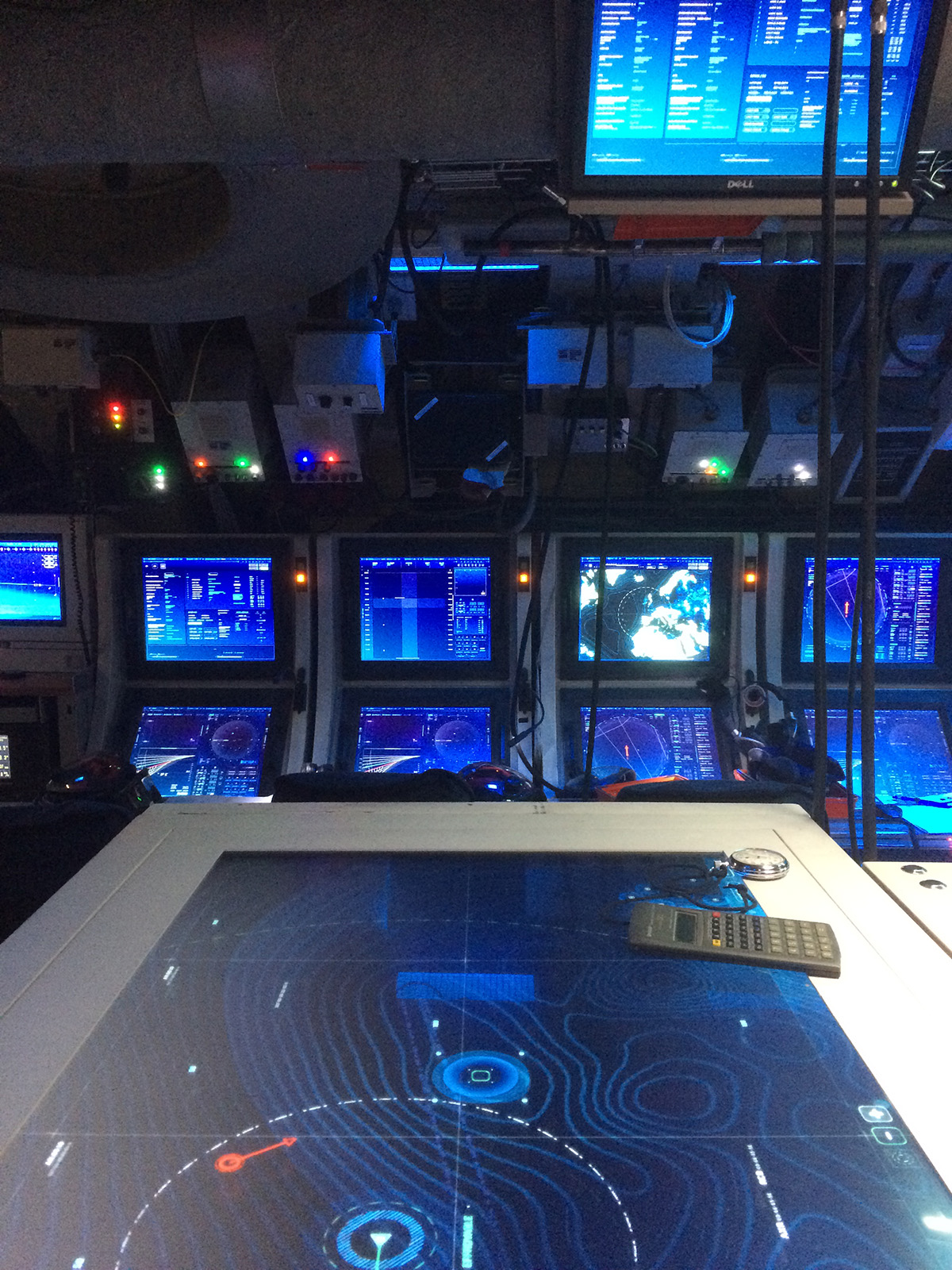 Another view from on set. Notes Baudry: “That interlinked system was very important for me because one of the things that I really wanted to show was how the different people in the submarine interact together as a team. I noticed in the real, actual, submarines a lot of screens are repeated or are interpretations of the same thing to different screens. For example, if they’re listening to sound, the guy will listen to the sonic sound in a range of frequencies, and he’s able to listen to the same sound but with another spectrum of frequencies. So the graph would be sort of similar, but different. With different colors, different shapes. But they would recognize that they are listening to the same thing. And that was important to me.” 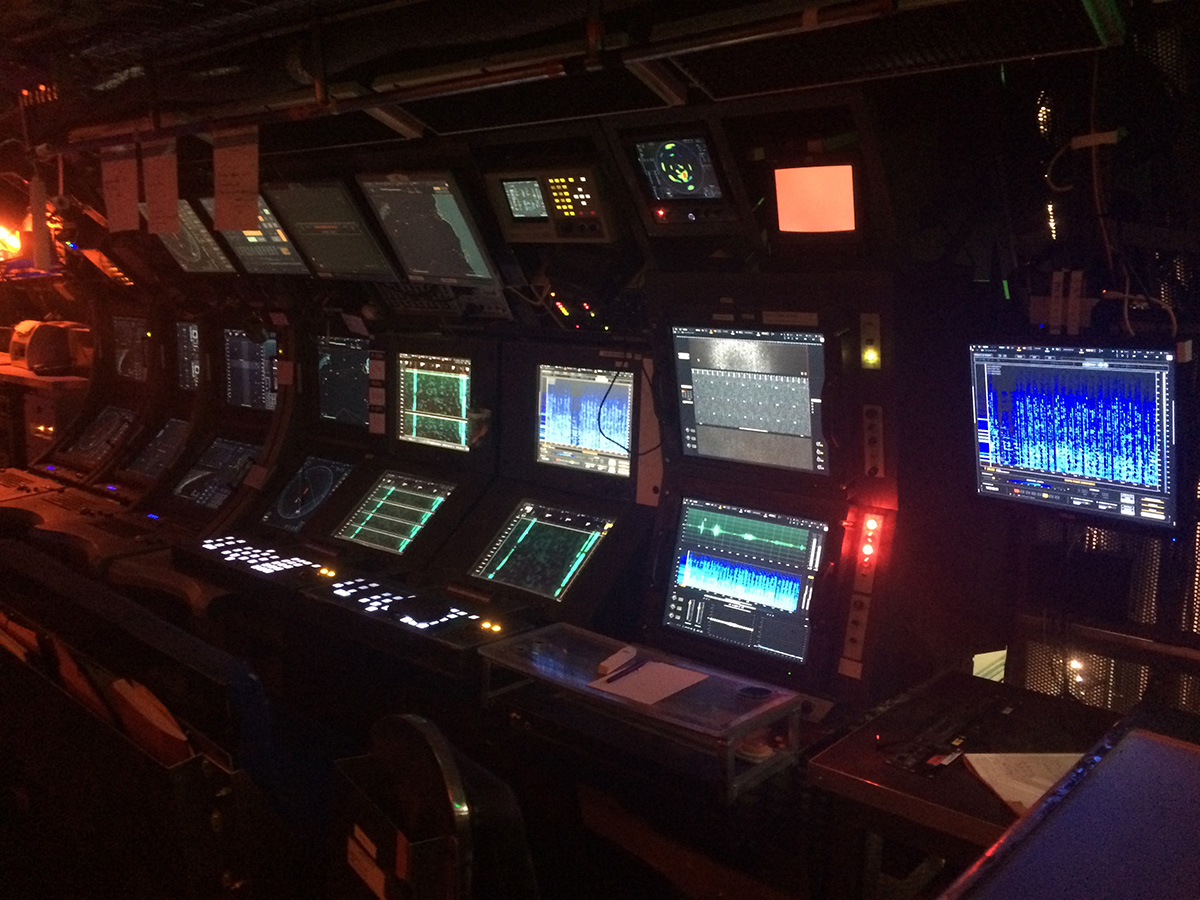 Above, a view of the screens in action. “Myself and Antonin could be shouting from one end of the submarine to each other and then running around the place and fixing everything up before each take,” says Keehan. “You do a take for 30 seconds, then you have a set up of 15 seconds. The shorter you can make that amount of time, the better. If you’ve got a minute that it takes you to sort the renders out, if you take a 100 shots in a day, that’s 100 minutes. So you want to try and minimize that time as much as possible.”

“I remember speaking with François Civil, the main actor, a couple of times on set,” notes Keehan. “He was fantastic with his interaction with the screens. Not only reacting to things we had built but also one of the screens was a laptop that couldn’t be properly remotely controlled because there were so many cameras and people in the room that we couldn’t get a signal to it. And he actually turned around and he operated that screen for us, given that he was meant to be interacting with the screen. He could hit play and render at the right times, and he almost became a member of the playback team, really, for some of the scenes when we were using the laptop.” 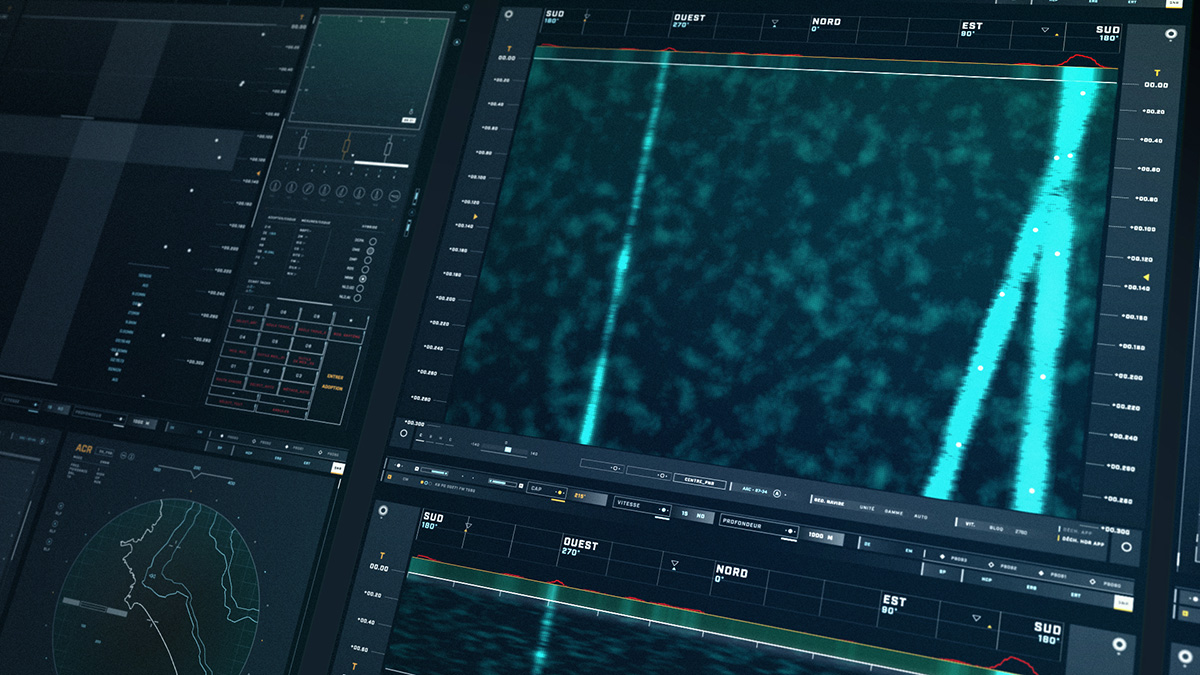 “Sound,” concludes Baudry, “is actually the main core actor of the film, as though it’s sort of invisible, and I say ‘sort of’ because it’s actually visible through the screen, and what I wanted to achieve was a visual representation of sound in the film. I wanted these representations of sound to be not only efficient and realistic but also beautiful. That was important to me. And also what I wanted was to put the actors in a real situation and to have them really act and play with the machines and the sonars that the screens represent.”

Here’s some more of Territory’s screen GFX from Le chant du loup, below. 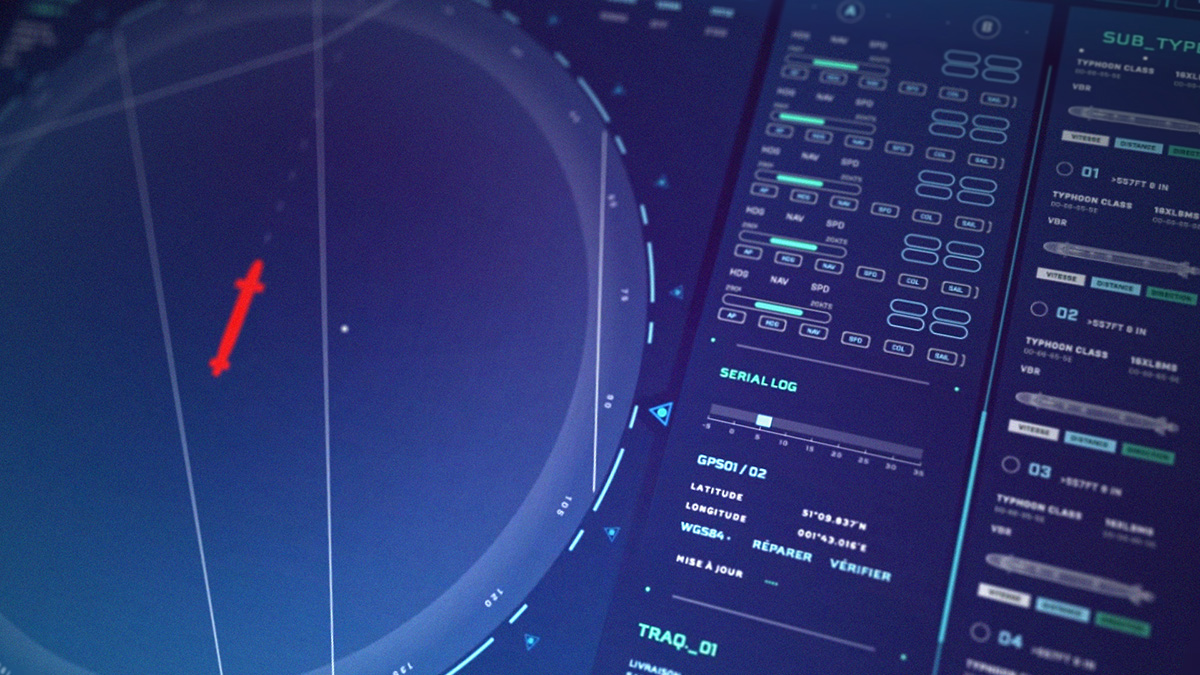 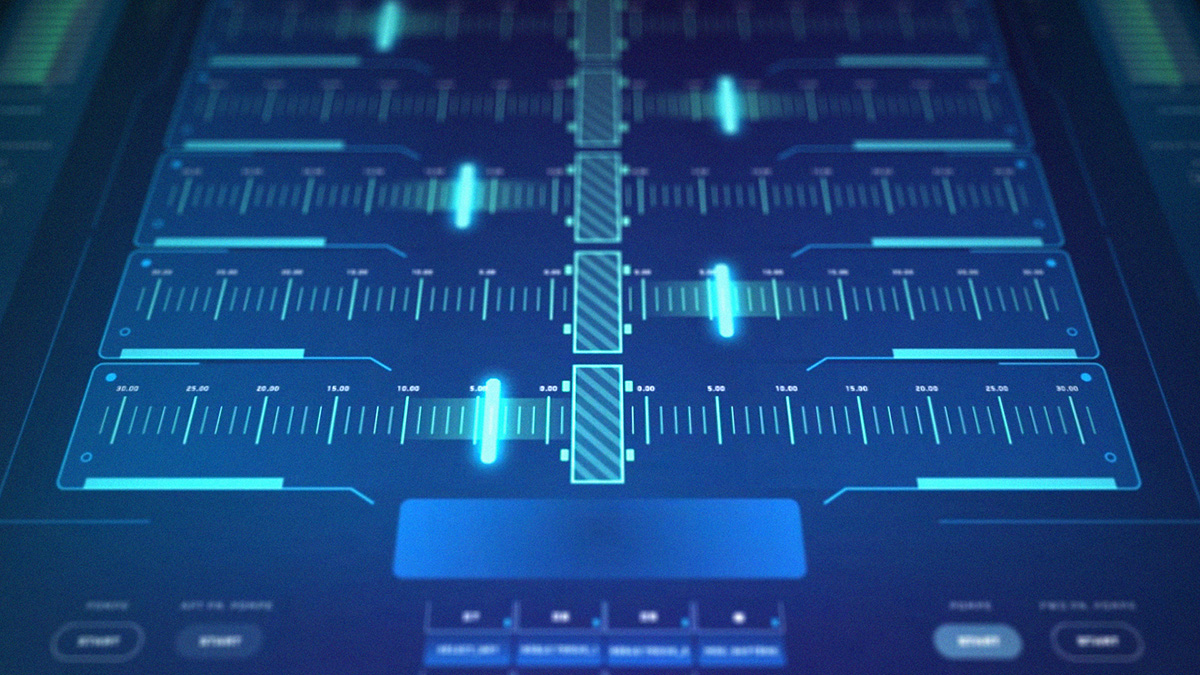 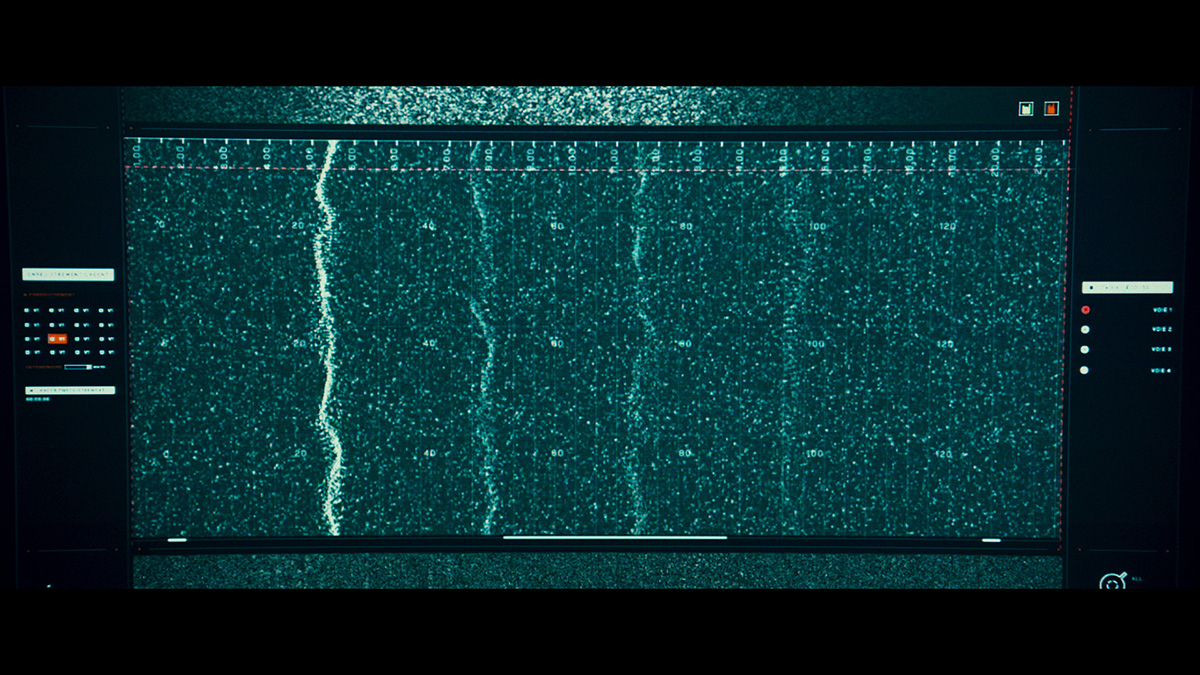