Season 2 is even crazier than Season 1

It’s fair to say that the visuals in season 2 of American Gods are pretty ‘out there’. This second series follows more of the battle between Old Gods and New Gods, and the audience is witness to a much more expanded view of the world this time around.

Many of the intense visuals are, of course, thanks to the efforts of the visual effects team, overseen by visual effects supervisor Chris MacLean from Mr. X, Inc. For befores & afters, MacLean – who calls the work ‘psychedelic fantasy visual effects’ – breaks down four of the killer VFX sequences in the show from the early season 2 episodes.

Several Old Gods reunite at the House on the Rock, boarding a carousel that spins and transports them into the otherworld.

For the carousel, I went and scanned the real thing at House on the Rock with [visual effects supervisor] Eric Robertson early on, before we started pre-production. That gave us a LiDAR, and we got a BLK360 file and a C10 Leica file of that room. We also had a handheld Artec Spider with us that we used for the animals, we managed to get about 30 of the animals scanned with that. It was so tight, and there was so much occlusion, the only way for me to actually get in there and get the detail was to spend three nights on that carousel with the thing turned off. I had to actually move around and do photogrammetry while in the dark.

The only way for me to actually do that was to take a light, do a long shutter and find a spot where I wasn’t rocking the floor because the whole floor of the carousel was made of half-inch plywood. So I would be sitting there finding a spot where I wasn’t affecting the camera, and then I’d be painting light on these long exposure shots where I could actually get enough light on the carousel animals to get them scanned and get them back to Mr. X. I was worried about using this method solving for photogrammetry as it usually requires little to no change in the subject lighting, but because they were such long exposures and the light ended up being diffuse enough, they worked.

A few months later I went back to shoot the main photography at House on the Rock. Ian McShane (Mr. Wednesday) was asking for a fan, and we’re saying, ‘No, we don’t need a fan, you’re not moving, the world’s moving around you.’ He’s like, ‘What do you mean?’ and we’d explain, ‘The carousel’s sitting still, everything else is going to be moving. Wait ’til you see it.’ We took two-frames-per-second footage that we shot, where we had cameras pointing out of the carousel as it spun to get the long light trails, and did a lot of compositing work.

Then whole room is exploding, there’s angels, there’s the giant demon bunny in the background, there’s all these characters riding their animals with these giant time-echoed wings, kind of like a drug trip, where there’s tracers everywhere and then we fly into Mr. Wednesday’s eye, we’re riding the Bifrost through his eye for a few minutes. We built this light streak of rainbow prism colors, it’s the ‘Dark Side of the Moon’ times a million on the backside of Ian’s eye that takes us into Valhalla. If you stop that shot, every frame is a painting when you look at it. 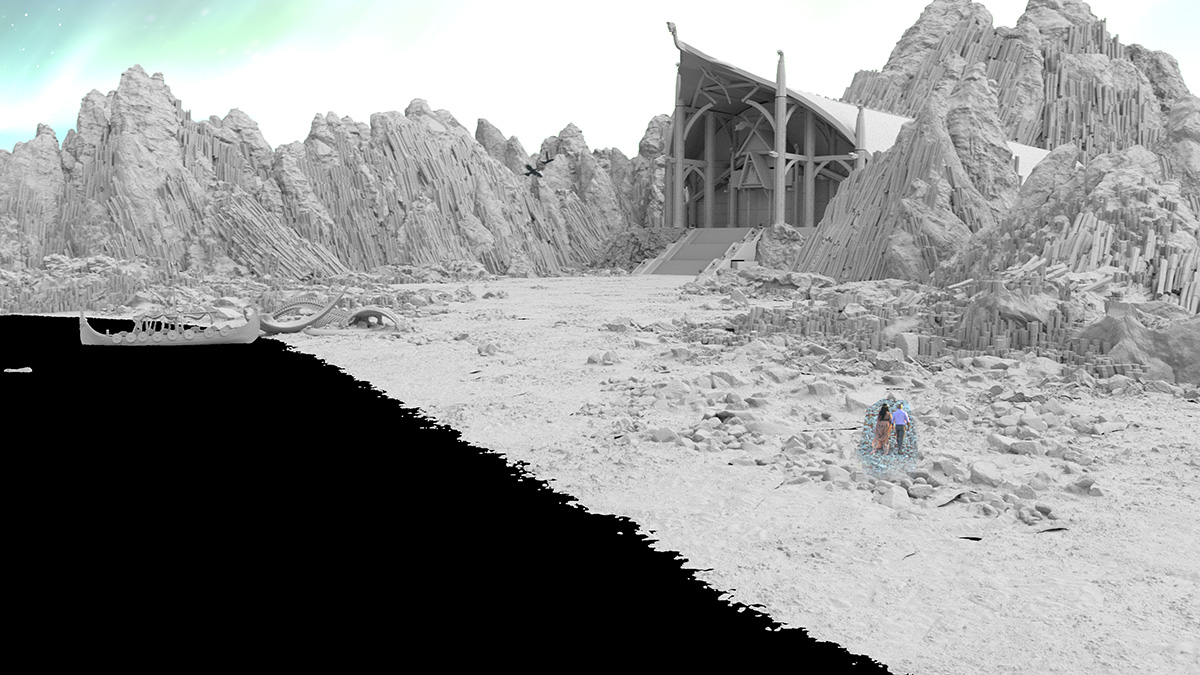 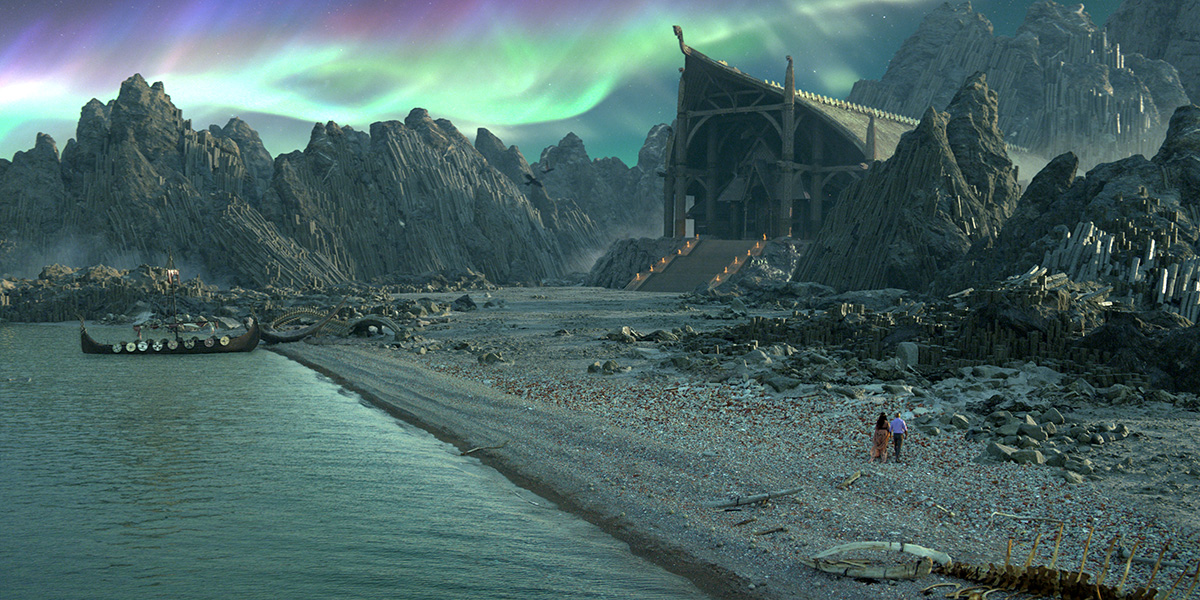 The only practical element of that shot were real versions of the actors on the animals that they were riding. We had a 60 foot greenscreen cyc for the whole shoot. We went in and just shot on a dolly, running the camera past them as they did silly things. We got one with Ian just laughing at the camera flying right into his face and that’s the take we used, it’s perfect for the shot.

Inside the Hall of the Gods, the Old Gods themselves are seen with ‘God Wind’ trails emanating from their heads and bodies.

All the Gods transform into their ‘true selves’, what they look like when we’re backstage, and they’ve got this fiery plasma coming off them. Tendril did all the VFX on that. It was all rotomation, with the effects done in Houdini. We scanned all the lead Gods early on at Mr. X and gave Tendril the scans. They rigged them and did the rotomation version with the rigs, and they did their particle sims off of them.

There’s so many little details, like Mr. Nancy (Orlando Jones), when he gives his speech, he stabs the piece of wood with the two knives, and he starts talking, and you notice that he’s got little spider legs in his hair that they tracked into his dreads. So they had to roto out all of his dreads and make sure that the spider legs interacted with all that. At the end of all that, they added the eight eyes to his forehead. They waited right to the end for that reveal.

If you look closely at Bilquis (Yetide Badaki), the tendrils coming off of her head are actually the faces of the spirits that are inside of her and they’re shaped like sperm. There’s a whole bunch of stuff that they added to that sequence where you have to watch it four or five times just to see it all.

The God Media is reincarnated as New Media (Kahyun Kim) in a kaleidoscopic birth scene.

We shot glass mannequins for New Media’s birth, because when she’s born we went back to the faceless drones from Tech Boy sitting in the limo from season 1. We took that idea and said, ‘Okay, when the Gods are born, how are they born?’ They’re kind of like this faceless thing that sit backstage. They’re not anything yet. With New Media, we shot these glass mannequins, shallow focus, it was all pieces, faces, hands. It all had seams in it, so we built CG versions of her. We had a scan of Kahyun, so we took her, blend-shaped from nothing to something.

Then we also filled her full of the God wind plasma inside of her, different kinds of multi-colored God wind plasma. She’s New Media so she’s narcissism, Instagram, she’s emojis, she’s all that stuff. Then they dropped her into a water tank and shot her on the Phantom, so we have her at 1200 frames a second getting dropped into water. We then reverse that. As she comes out, the emojis and all the God Wind are released.

It’s all multicoloured, multifaceted, just crazy, wacky. Actually, that was one thing that we tried to make sure we carried over from last season, was the color, and maybe even amp it up, just a little bit. We also did a 3D hologram version of her, which was just her dancing for her fans. We had her do the dance on greenscreen. I couldn’t do a full array, so I had three REDs, she was full frame and we shot her cowboy, we shot her from three different angles, took those into Photoscan, and made point cloud versions of her. Then we projected her into a volume inside of Houdini and rendered elements out in Mantra for the compositors to blend together to complete the hologram effect.

Argus, the god of surveillance, makes an appearance, complete with multiple eyes and tentacles.

This was a scene that was never supposed to be CG, originally. They built a puppet, then changes were made and they decided not to use the puppet, so they put the actor in makeup and put him in this chair. He had to have a thousand eyes all over him, so we rotomated the actor and tracked in all the eyes and added tentacles. 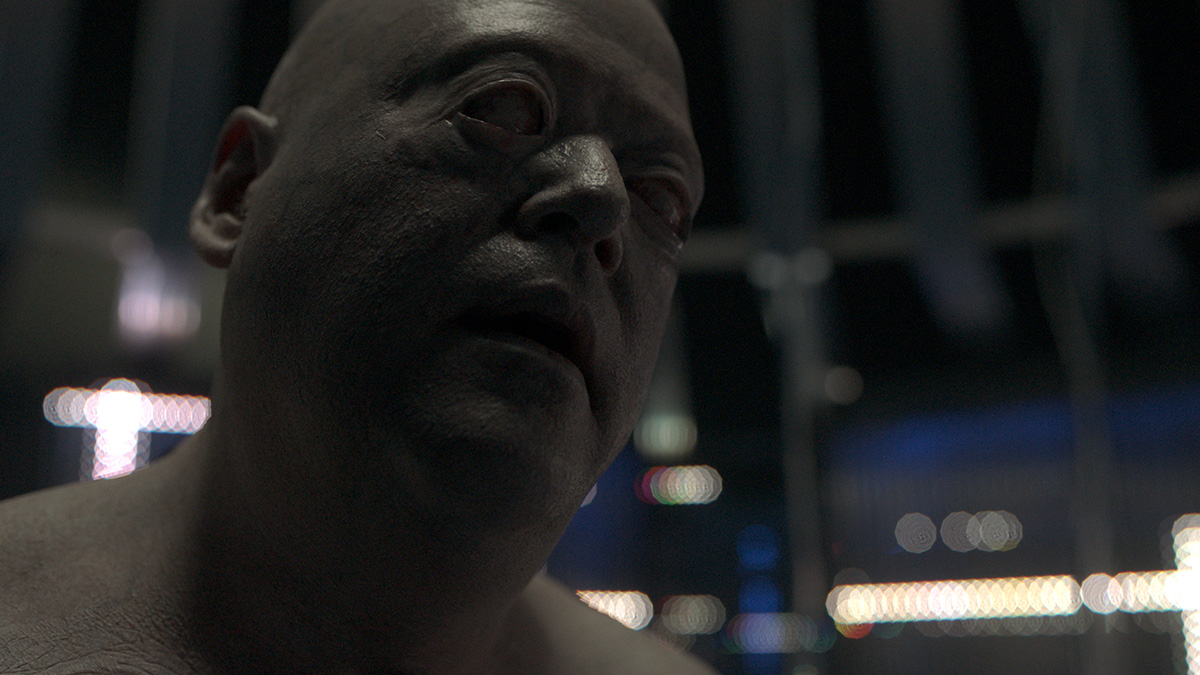 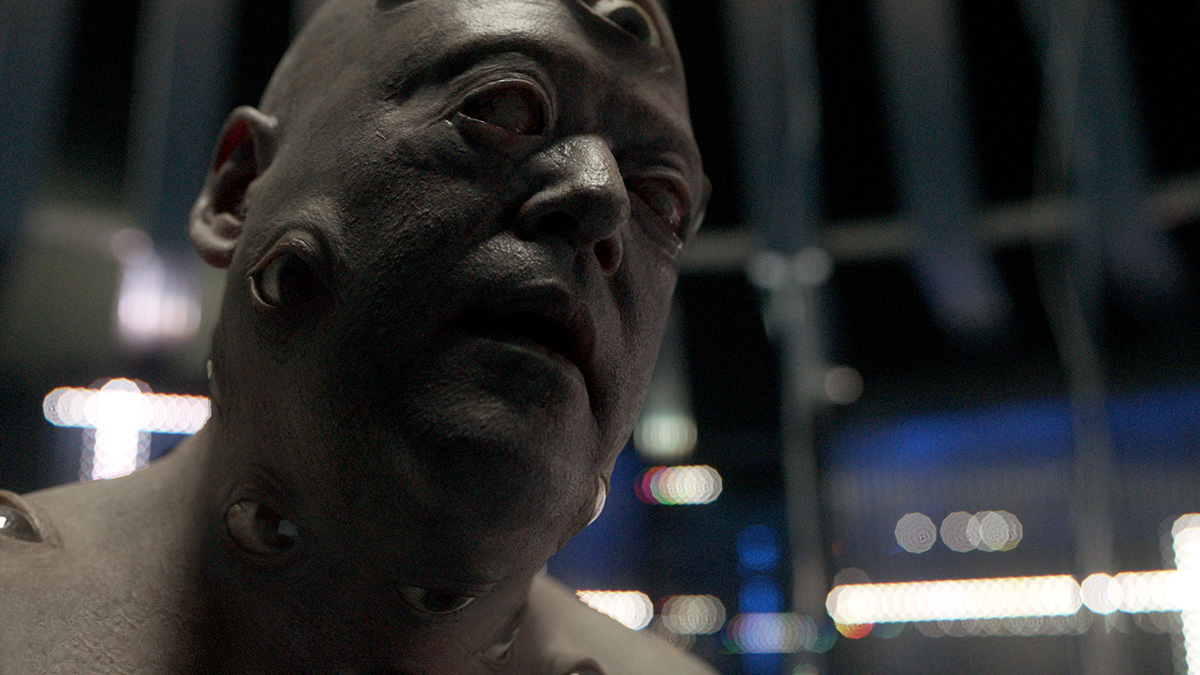