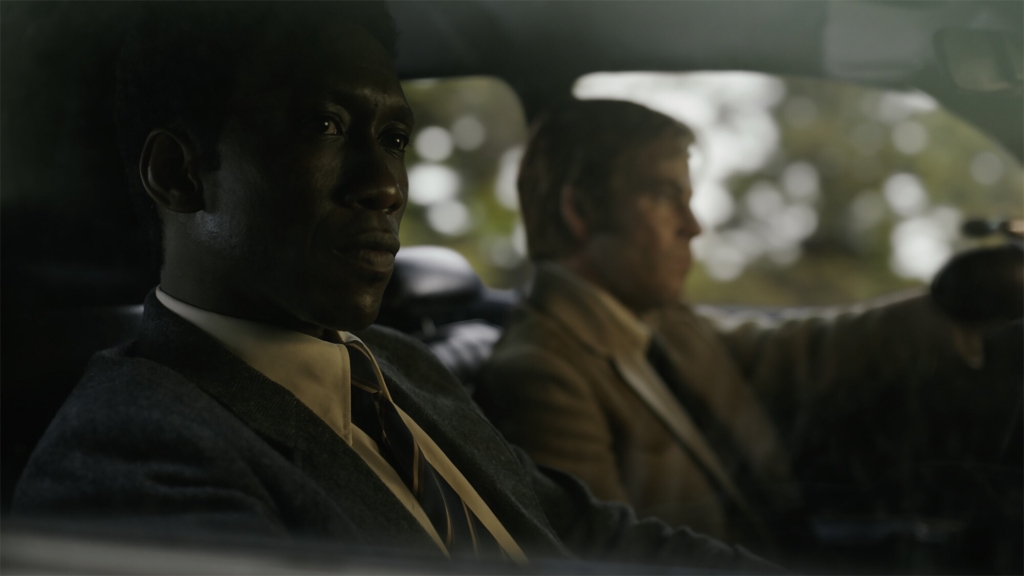 They are in the car A LOT

Season 3 of HBO’s True Detective follows a whole new set of characters amidst a crime investigation involving two missing children. Many scenes required driving comps, that is, shots of the actors in a vehicle traveling along that had been filmed on greenscreen, with roadway backgrounds composited in.

FuseFX handled over 200 such comps for the series, starting with plates shot with their proprietary FuseFX Driving Rig, a multi-camera array that could be placed on a proxy vehicle. How did all that work? befores & afters asked FuseFX visual effects supervisor John Heller to explain.

John Heller: Our driving rig was built to allow for a full 360-degree stitch-able panorama. We strive to offer the highest quality imagery and to provide unmatched cost efficiency and flexibility. The rig consists of six, 4K cameras that record to external decks. This allows us to use DaVinci Resolve color correction software as part of our in-line process to further optimize an already broad color range on the fly.

We shot hours of footage. At times we accompanied the main and second units where seamless continuity is paramount, and at other times as a completely independent crew which allowed for a great deal of flexibility — without further taxing a challenging production schedule. The show is generally set in three specific periods, 1980, 1990 and 2015 — each with a slightly different visual language including time of year. This required us to shoot for two seasons, Winter, with its barren trees and low gray sky and Summer where the Ozarks come to life with brilliant green.

After the initial capture, the plates are cataloged and processed in sets for delivery to client editorial where selects are made. When we receive the selects, we process the originals which include stabilization, color correction, and integration into the final composites. All of these steps are done in-house as a turnkey solution. FuseFX owns the process from visual effects supervision of all greenscreen stage shoots, the capture of all plate footage to the final shots.