The sphere in ‘Sphere’, and how it was made

Barry Levinson’s 1998 film Sphere, which is celebrating its 20th anniversary this week, brought with it a diverse array of visual effects straddling both the practical and digital worlds. Its central ‘character’, the sphere itself, was a CG creation by Cinesite and proved to be one of the toughest design challenges in the movie.

Overall visual effects supervisor Jeff Okun and Cinesite laboured for months over the appearance and textural qualities of the sphere, which needed to be other-worldly, ‘perfect’ and non-reflective – all at the same time. In this oral history of the sphere, we look back with members of the visual effects team on the film at how the CG creation was realized – even actor Samuel L. Jackson hilariously weighs in.

Note: Okun’s comments are taken from the fantastic documentary appearing on the Sphere DVD called ‘Shaping the Sphere: The Art of the Visual Effects Supervisor’, while Jackson’s words are from those he made during the audio commentary on the Sphere DVD.

Jeff Okun (overall visual effects supervisor): In the case of the sphere itself the first thing they told me was, ‘The sphere is a chrome ball bearing – end of discussion.’

Michael Kory (Cinesite CG supervisor): As described in the novel and in the script, it was to be ‘perfectly reflective.’ As such, it was essentially a giant chrome ball. When the team of experts first find the sphere, one plot point revolves around Dustin Hoffman’s character remarking that it reflects everything in the cargo bay, but not the humans. This is, of course, because of its ‘alien’ origin.

Tim Ketzer (Cinesite CGI animator): Picture yourself standing in front of a huge mirror without your reflection being visible. You see the reflection of the room behind you, which basically looks like another room. If the mirror fills your field of view, you would not know you are staring at a mirror. At least not until you bump your head on it. So with a giant sphere reflecting the spaceship interior, the sphere would be invisible.

Jeff Okun: We tried a million things, and we worked on the chrome reflection in the ball for about nine months.

Carlos Arguello: We literally did 75 different versions of a round, chrome sphere! I would look at the dictionary to revisit what ‘chrome’ meant, even.

Jeff Okun: When you really break down what a chrome ball bearing reflects, nobody really understands what it is. So if you take a chrome ball and put it in a black room it is black. So it presents innumerable problems because of the properties of what it is, i.e., it reflects everything except for the actors, which means it can’t be an object.

Carlos Arguello: There are some directors, like Michael Bay or Andrew Adamson, who are very visual. But with Barry, it’s more emotional. We would show him stuff with Jeff Okun and I remember going to screening rooms, and even I think we went to his house in northern California one time to show him dailies of the designs. He would just look at it and look at it and say, ‘No, it’s not there yet.’ That was about it. No other comments. It was just basically, ‘It’s not there yet.’

Carlos Arguello: At one point we thought, ‘Well, maybe it’s not the colour issue, maybe something needs to come alive or have some kind of a soul, or be a creature – because it was transmitting this idea that it was going to convert your fears and you’re going to die from your fears, right? So we started adding motion into the sphere. A circle of motion with lines, then a little texture that moved around.

Michael Kory: Late in the production, there was a screening of the work in progress for Levinson and others, and someone in the room commented that the sphere didn’t look ‘alien’ enough. So Cinesite was tasked with coming up with a dozen or so more options.

Carlos Arguello: The problem was, we were always making it chrome or bluish, and it was always hard to communicate that the sphere didn’t belong in that room while it was still blue or chrome. So after about our fifth or sixth set of meetings just showing Barry many, many designs over time, basically I sort of got tired of it and I said, ‘Well, I’m going to show him a gold one, just to provoke him into saying something.’ 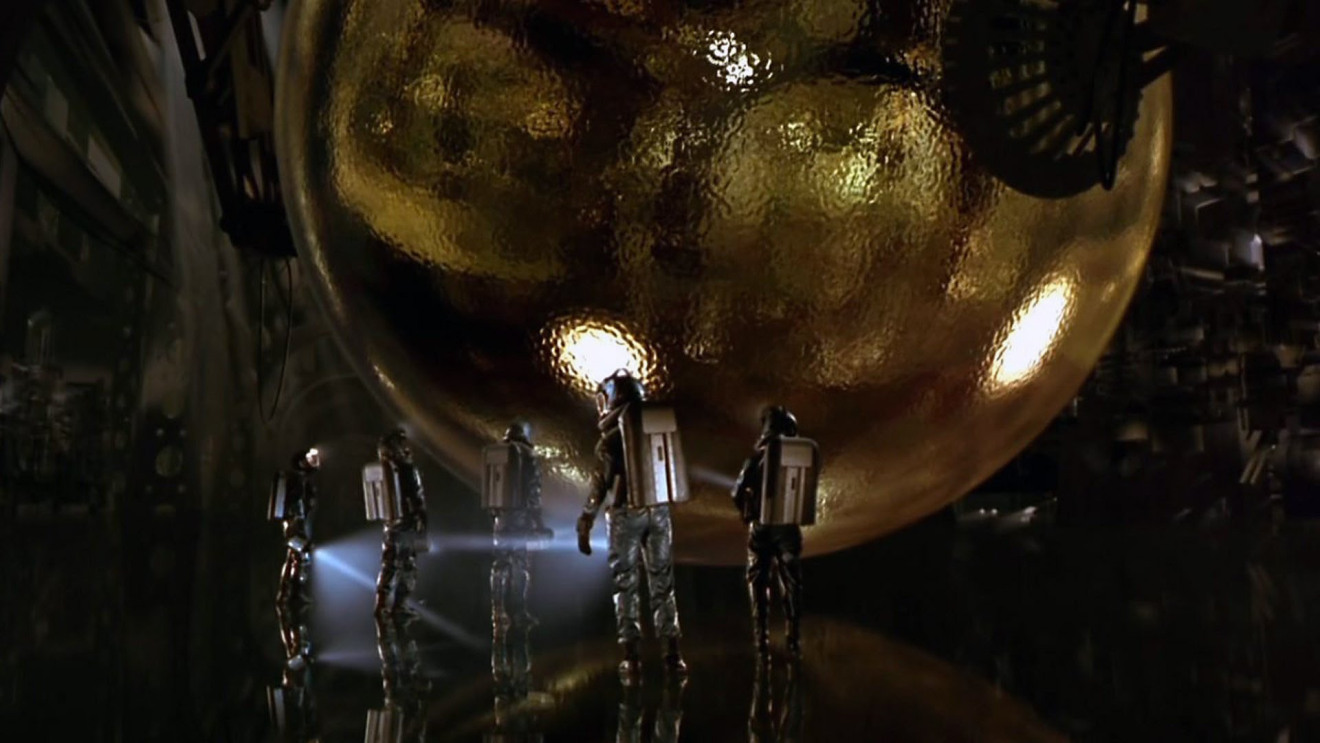 Tim Ketzer: Carlos asked me to come up with a design: ‘Make it visible and look cool, and make it fast!’ or something like that were his instructions. So I put a ‘solid noise’ bump map onto the sphere and moved it though space. The result was the bumpy, liquid surface look.

Jeff Okun: Finally we showed Barry what we thought was the ultimate solution, in which we played with the amount of distortion, the amount of light, what it reflected, what it didn’t reflect, where the horizon line was. We took the champagne colour off of the gold foil off the lunar landing module, showed it Barry, and he nailed it the first time out.

Carlos Arguello: Barry said, ‘Yeah, that’s it,’ and off we went with that particular look.

Michael Kory: Levinson picked the gold bump mapped look that has a slowly animating texture which is in the final film. Problem is, the noisy bump map makes it so that NO reflections are identifiable, consequently Hoffman’s line doesn’t make any sense.

Jeff Okun: Finally what we realised was that it didn’t really matter what it reflected as long as we got a sense that it reflected the cargo bay and not the people. Suddenly Barry said, ‘Now it’s something to look at, now we see an alien object, now we finally have a title character to the movie!’

Tim Ketzer: The texture I had created in Alias had to be rendered in RenderMan, so it had to be converted, which at first caused some resolution problems and seams in the surface. I’m not sure why we did not use a fractal in RenderMan to start with. I think it was because the noise in Alias ‘looked better’ or merely because it was the noise we had used first.

Carlos Arguello: When they filmed the scene, they basically only built the lower quality of the sphere. At one point the actors touch it, and so they just touched greenscreen and interacted with the greenscreen, so it’s a greenscreen floor, the ball, and the greenscreen background.

Samuel L. Jackson (actor, Dr. Harry Adams): For me, [shooting the scene] was a real revelation, because we did this every day against greenscreen for about a week, a week and a half. As an actor, it presents an interesting dilemma because the whole time I was doing this stuff I thought the sphere was silver. And in a strange kind of actor-y kind of sense, I was acting for a silver sphere, not a gold sphere.

So, I’ve wondered, watching this film, how I would’ve looked or what my expressions or reactions would’ve been had I known the sphere was gold. So what you see here is acting for a silver sphere, not a gold sphere. I still have a gold-sphere performance in me somewhere, but this is not it.

[callout template=”default”]Sphere Easter eggs
There is debris shaped like Gumby and Pokey in the spaceship explosion scene in the film. “Jeff Okun asked me to put them in there,” says Tim Ketzer, who also suggests viewers look closely at the cracks forming in the spaceship fin before it explodes for the letters ‘TIM’, upside down, in that area.[/callout]

Carols Arguello: What was also a challenge was the flashlights, because you sort of think that you’re going to get the flashlights on film, but you don’t. The scene was shot without the lights, and then we had to go and re-build the light beams. We had to go and track all those lights and composite them in – except for the reflections. It’s a big effect that is not noticeable.

Tim Ketzer: It still cracks me up when in the movie the crew says just how PERFECT the sphere is, and at the same time, the surface wobbles all over the place.

Carlos Arguello: I actually give a lot of talks about visual effects these days, and I use this sequence as an example. One thing I tell people is, you don’t have to follow the instructions all the time. You need to understand what’s behind the instruction. My instructions were to make fear, but I was not getting there, I was not getting to what the director wanted. What we eventually did was create an object that didn’t belong to the rest of what was in that ship, and that’s what ended up in the film. I had to understand what was behind the idea in order to get there.