“I was surprised no one scratched my car after that conversation.”
– Encore vfx’s Armen Kevorkian on the killer King Shark vs Grodd fight in The FLASH

When your episode’s titled ‘King Shark vs. Gorilla Grodd’ you can be pretty sure you know what you might be in for; fighting, and lots of it. That was the challenge ahead for Encore VFX for a recent episode of The CW’s The Flash when those two characters clash head-on.

befores & afters asked Encore VFX creative director and visual effects supervisor Armen Kevorkian for an insider’s guide to how that fighting was choreographed. 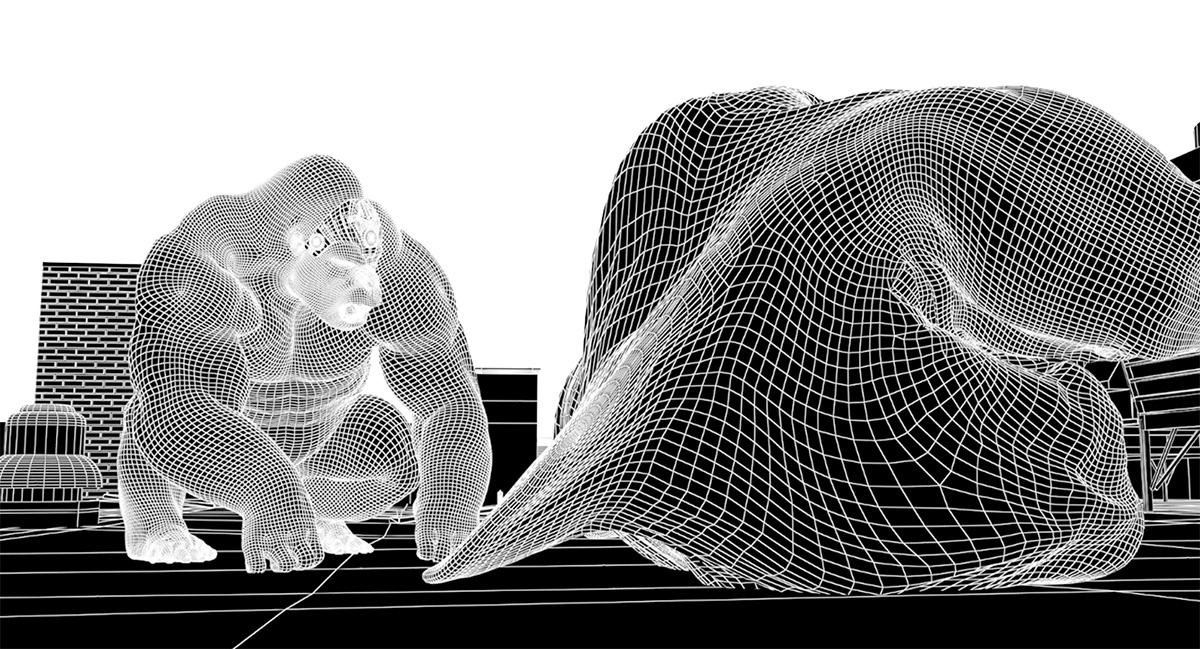 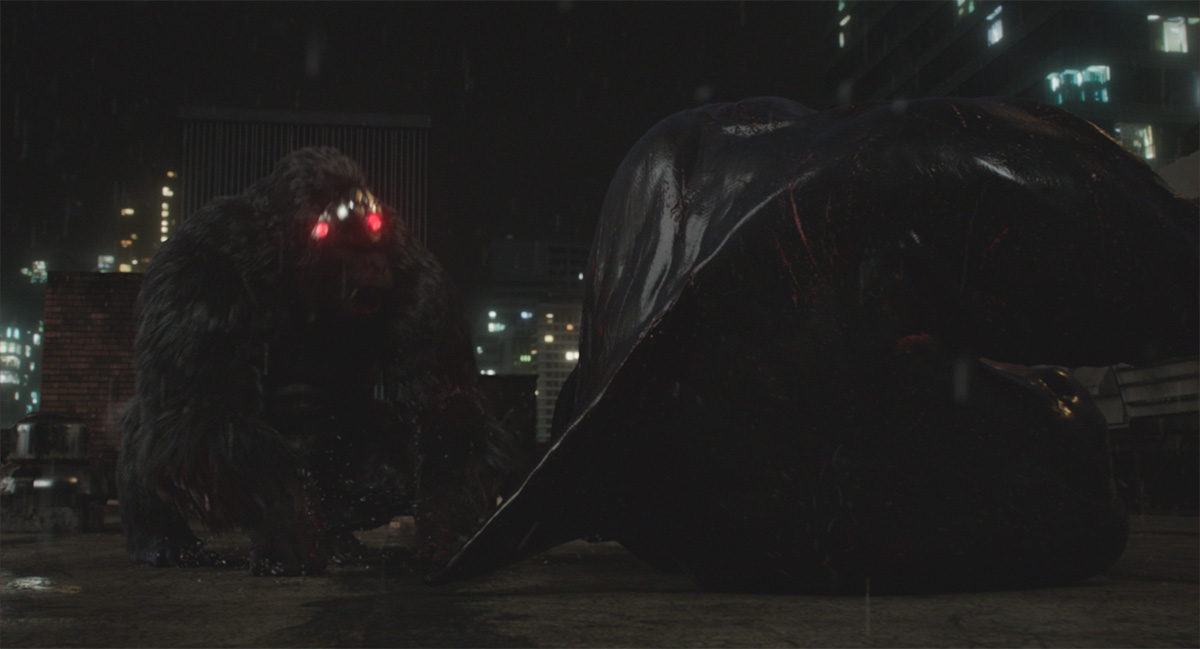 b&a: Where do you start with this kind of crazy sequence?

Armen Kevorkian (visual effects supervisor): For this episode, the conversation started off somewhere in November last year. I had some ideas of what I wanted to do, and how I thought it should maybe start, and I pitched it to production. And they liked, pretty much, all of it.

My initial fight was outside for most of it. And then the production said, ‘No, we want to use plates for these moments.’ So, it evolved, and then I said, ‘Well, what if I choreograph a fight inside like a abandoned warehouse, and a lot of the fight would happen there?’ And then, ‘What if the second fight happens on the rooftop?’ And so, I pitched it to them that way. And in the script, they pretty much fight in an abandoned warehouse. And they fight on a rooftop.

And then I went ahead and I worked with my animator. I treated it like live action, where I told him what the blocking of the fight would be – the beats – and just had him give me one wide shot of all those beats. Once I saw those beats, then I went ahead and I pretty much did the coverage aspect of it. Then we placed the virtual cameras for covering the fight. So it’s exactly like you do it in real life. You do a wide master, just to see where everything is, and then you see what moments you want to showcase and where you want your camera to be and how it should move. 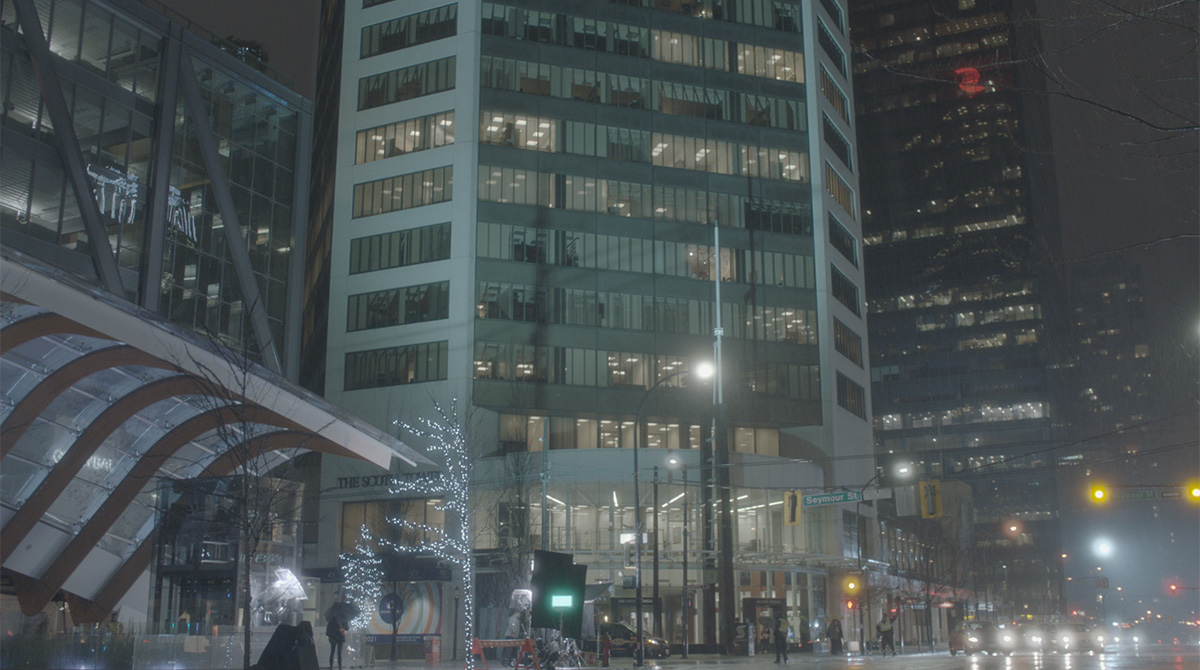 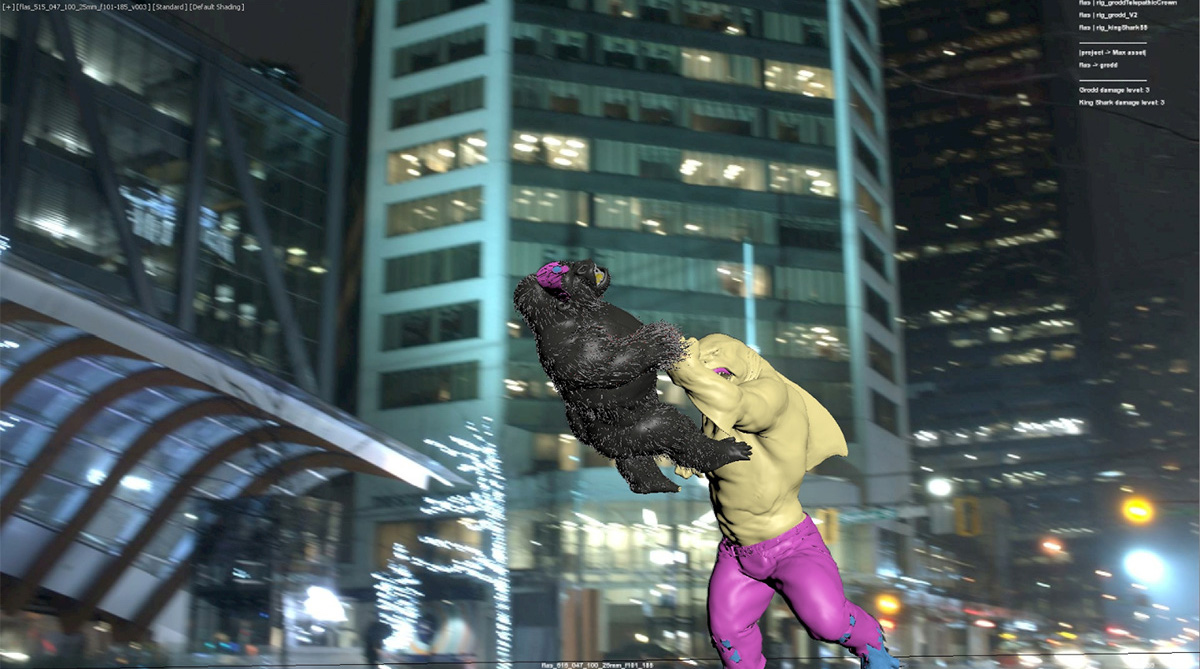 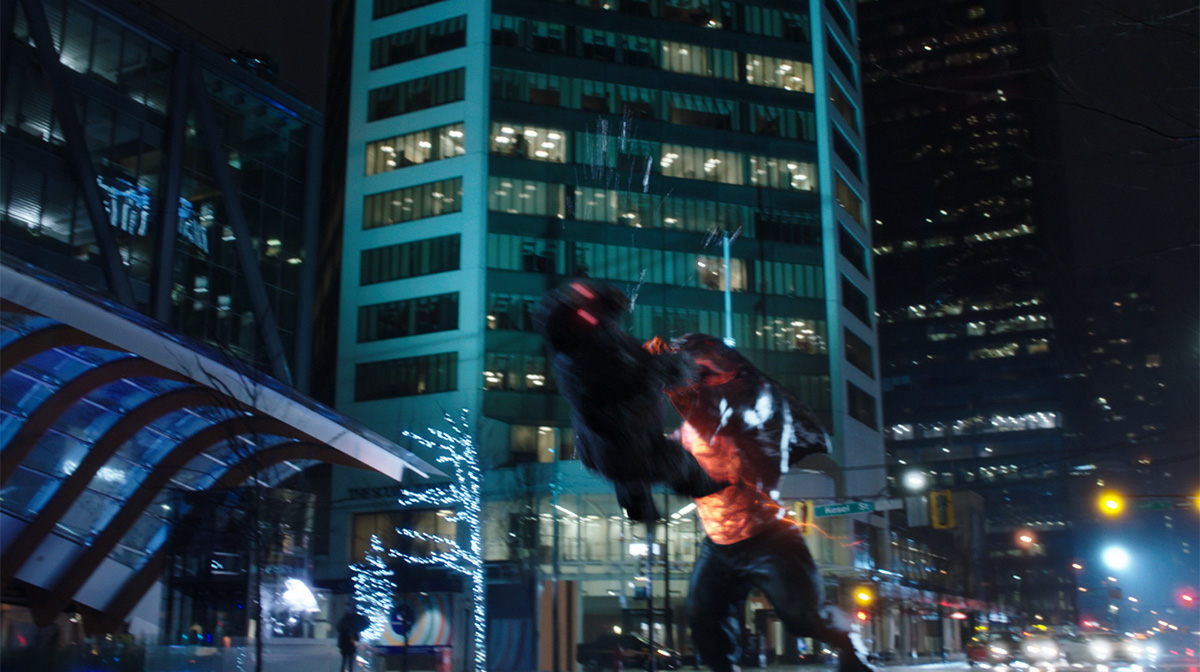 b&a: When it did come to filming this sequence, how did you handle that, especially considering they are all-CG characters? What kind of stand-ins are possible, if any?

Armen Kevorkian: For two of the fight sequences, it’s all CG. The environment’s CG. Everything. Now, for the live-action, what we’ve been doing since episode one is, we usually have a guy on stilts, or even a pole that represents the size of the character, just to help with camera placement, focus, eye lines, and things like that. Then we do one clean plate.

Sometimes we’ll use the clean plate, or sometimes we’ll just paint out the guy on stilts or the pole and use that one. The great thing is, now that we’ve been doing some of these characters for a little while it’s not a new thing for our actors, at least our regular cast. So they know the deal and they’re on top of it.

b&a: You’ve done Grodd and King Shark before, but tell me about the evolution of those characters in terms of the tools and techniques you use to bring them to life.

Armen Kevorkian: Because we’ve done the characters before, we’ve definitely gotten better and faster at it. I mean, every time we have to tackle them again, we re-visit the assets and say, ‘Is there anything with the time that we have that we can make it a little bit better than it was last time?’

Then, just to make our jobs harder in the three weeks we had, because in some of the plates it was raining, I decided the rooftop sequence should be raining too. I was surprised no one scratched my car after that conversation. But we had to come up with a wet King Shark, and find a way that the rain interacts with him. And then we had to come up with a wet fur Grodd, at least for it to feel wet-ish. So we had Grodd stages – dry, a little bit wet, a lot wet.

We had to have the rain drops interact with the characters in a subtle way where you feel it more than you see it, so you know that something’s hitting them, but it’s not an obvious thing. It seemed like days just to make it work. And then because it was raining, when one of them falls on the ground, they would have to splash in the puddle, which we thought would be cool, and the puddle would affect them even more. That added a level of complexity to this episode that we hadn’t faced before, and you learn from it. I’m sure next time we’ll do even better, because you see what works and you know what you need to improve on. 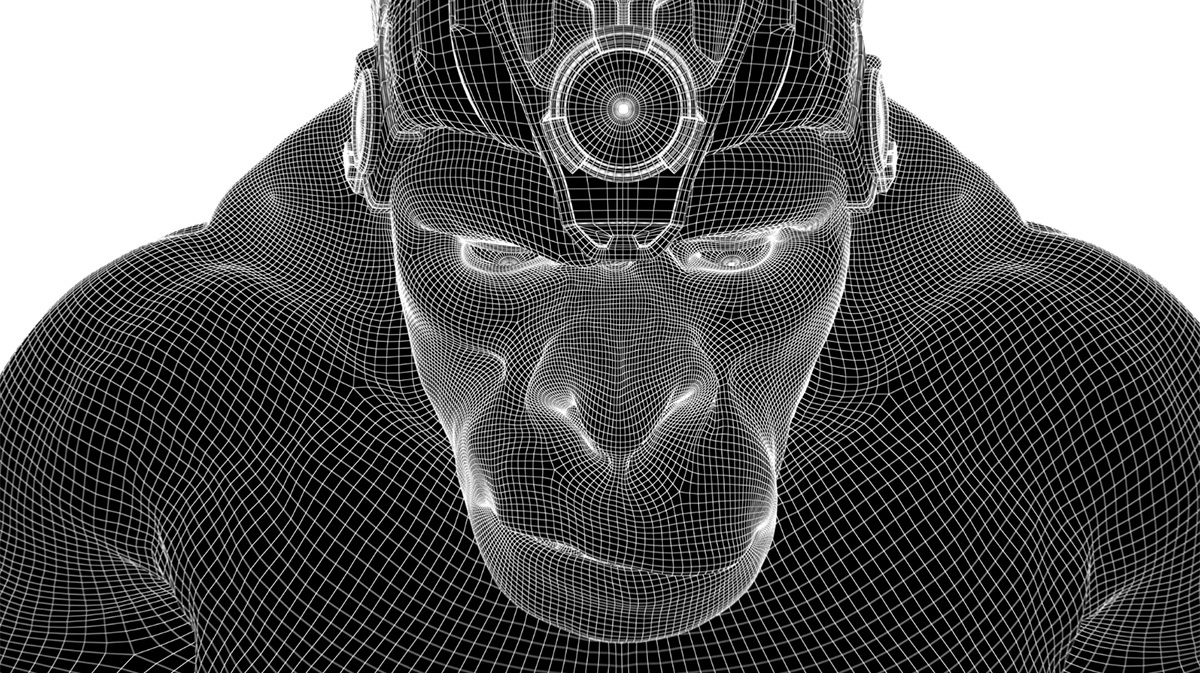 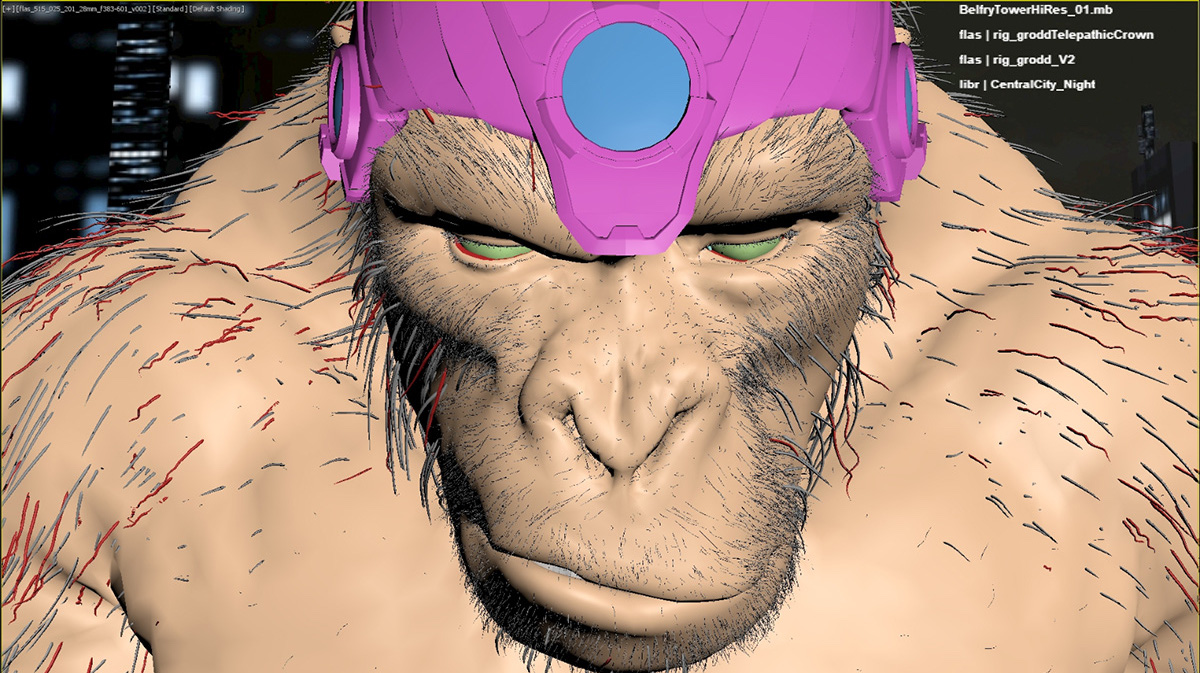 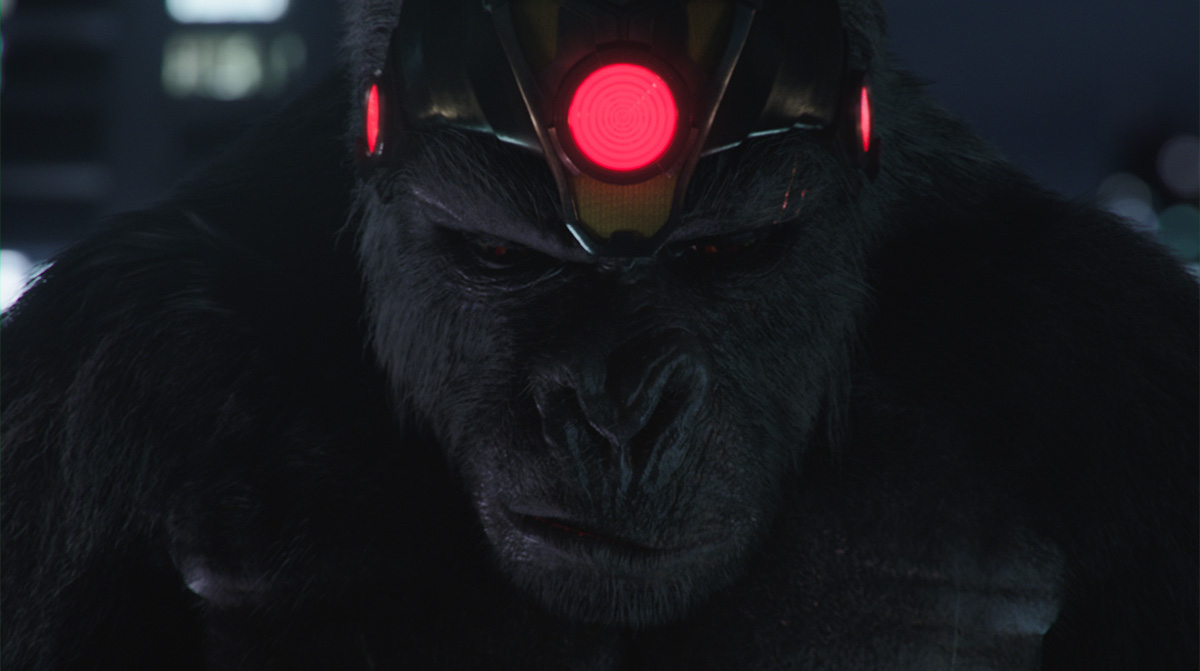 b&a: What kind of time did you have to pull this off?

Armen Kevorkian: I think we literally had three weeks. I think they shot the episode in January; by the time it locked, and they pulled plates, we had about three weeks, maybe three and a half weeks. Now, for some of the all-CG sequences, we had done some rough blocking, but we had to still build those environments, being the rooftop, and also the inside of the warehouse.

Armen Kevorkian: Absolutely. I think with Grodd, what I’ve always tried to do is still keep that ape-like fighting style that you’ve seen maybe even in King Kong or the Planet of the Apes movies, which are fantastic. People are used to at least seeing that type of movement from a gorilla. And then King Shark, I just see him as similar to those giant wrestlers. That’s how I explain it to our team – he’s like Andre the Giant, who’s really powerful. He’s huge, but he could still movie. The one thing I really wanted to do for this episode, especially for their all CG fight sequences, is to really have that handheld fight sequence look, like a camera operator who’s on a Steadicam, or even just handheld, just following this fight, like we do some of our other fights in these shows, and the whole Arrow-verse.

Sometimes, though, you might do something that’s accurate to, let’s say, a certain animal, even a gorilla, but you’re still like, ‘This doesn’t look right.’ Even though it is. I’m sure somebody will show you a YouTube video but for some reason, it doesn’t work for our show and we often need to take a little bit of licence and change it, just to make it look cool at that point. 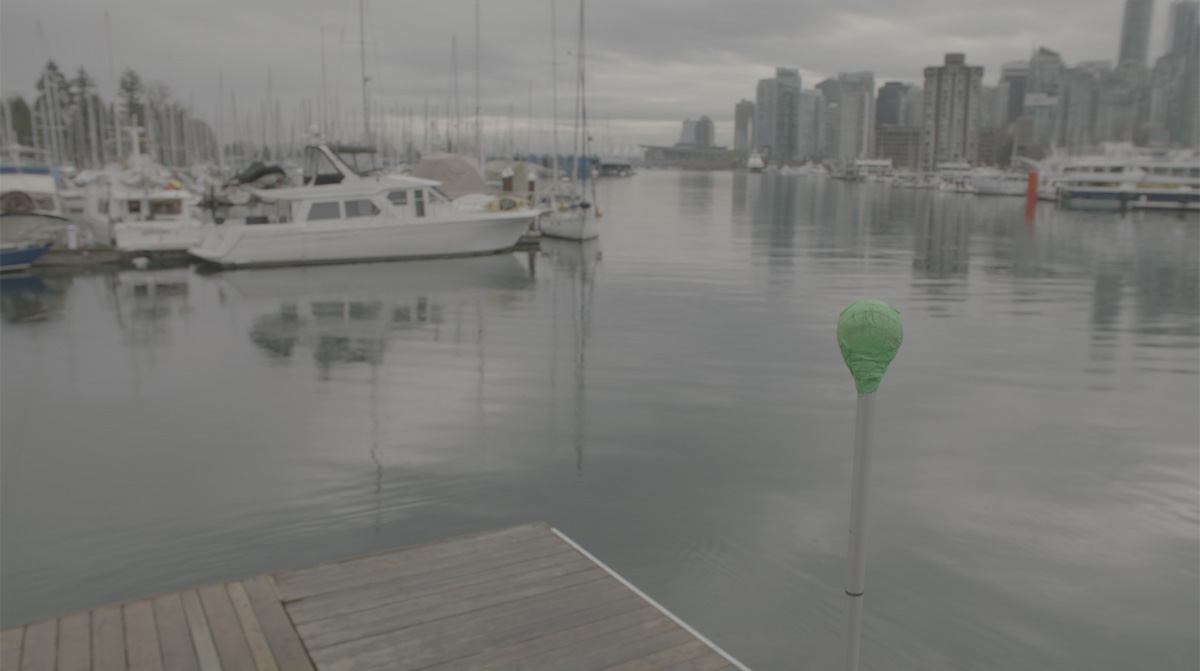 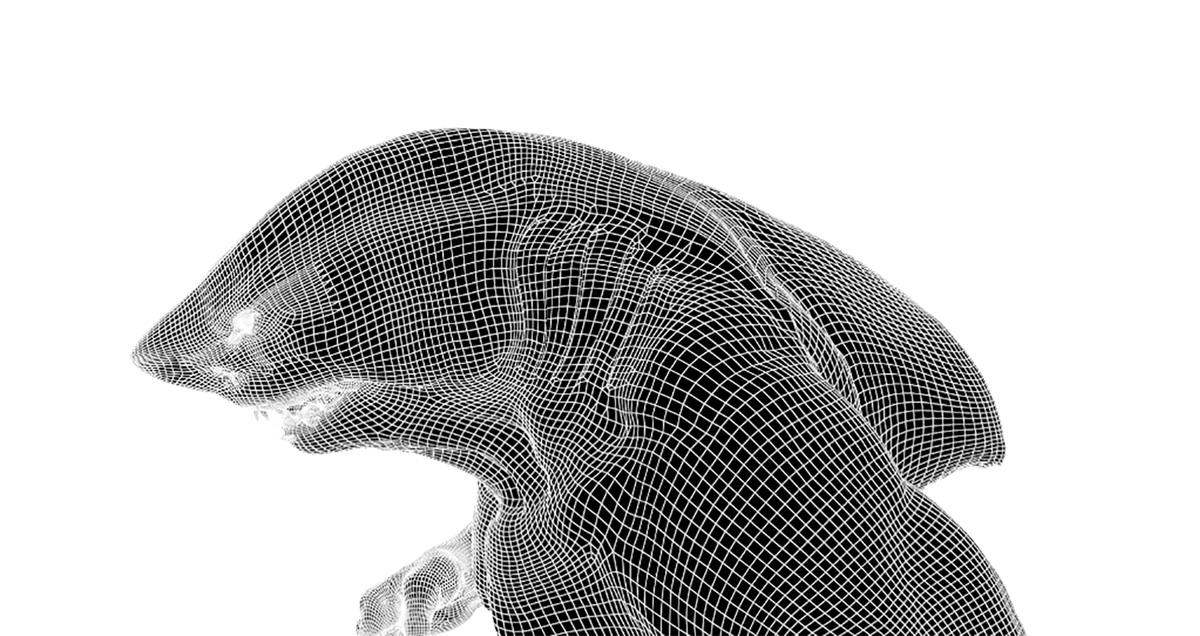 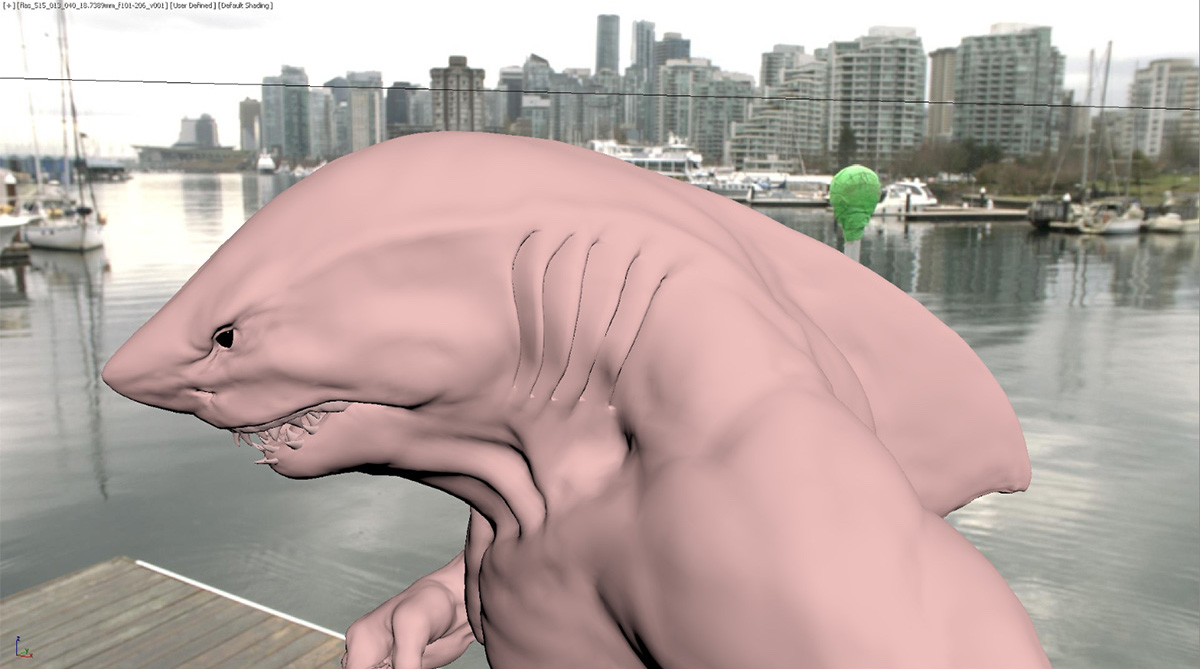 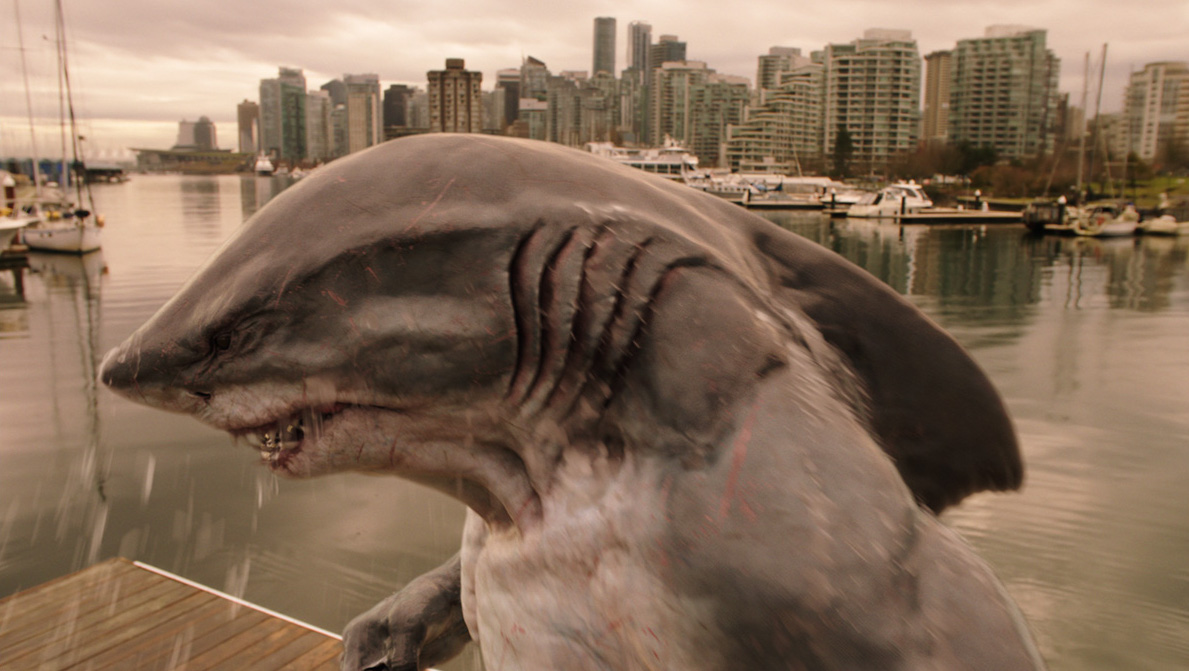 b&a: These are ridiculous characters – it’s a shark man and a gorilla, and then even Flash does ridiculous things. But they’re so well embedded into the scenes and into the story. What do you think are the things that help you do that, both from a character trait point of view?

Armen Kevorkian: The most important thing is, what story are we trying to tell? This episode’s a little more indulgent – ‘Let’s just have our two biggest beasts fight against each other!’ It’s like little kids playing with LEGOs at that point. But at the same time, there is a story aspect of it, where, as much as you can, you want to capture emotion in the animation. There’s a scene at the end of the episode, where it’s almost like a little bit of a love story, with King Shark and somebody that he was with while he was human.

Also, our team takes it very seriously. I remember the last King Shark episode that we did, there’s a moment he jumps out of water in slow motion, and I asked my animator, I said, ‘I want you to put a little strain in his eyes.’ And he said to me, ‘Sharks can’t move their eyes.’ And I’m like, ‘Well, sharks also don’t have arms and legs and wear pants. So we’ve gone beyond that point. So I feel at this point you could move his eyes, because I want him to move his eyes.’

Or, one of the things I might say is, ‘His eyelids are closed.’ And I think one of our guys said, ‘They’re not eyelids. They’re membranes…’