An oral history of the VFX studio’s work on the 2001 Robert Rodriguez film.

One of the VFX studios entrusted to deliver characters such as the Thumb Thumbs, craft underwater environments and the jetpack sequence was Hybride. This collaboration saw the Quebec-based studio continue to work with Rodriquez over many projects–to this day–including on all of the Spy Kids films.

To celebrate the 20th anniversary of Spy Kids, and to look back at Hybride’s work on the film, befores & afters asked several people at the VFX studio what that experience back then was like. Their current roles at the studio are also highlighted.

How Hybride got on board Spy Kids

Louise Bertrand (VFX producer): We first met Robert Rodriguez while working on The Faculty in 1998.

Daniel Leduc (VP & visual effects executive producer): Brian Jennings, visual effects supervisor on the project, had previously worked with Hybride on Guillermo Del Toro’s Mimic. We received a call from Brian inviting us to come on location to meet with Robert. Following the meeting with Robert, we created a water creature test within a week. I remember outputting the test on a VHS for easier travel and playback on set. The sequence was instantly awarded to us, and our workload started growing from there.

Louise Bertrand: We ended up creating 400 visual effects shots for the film and it was only the beginning as, over the years, we have worked on a total of 13 projects with Robert.

Tools for the job

Yanick Wilisky (producer – project development): In 2001, Hybride was using 12 Silicon Graphic workstations running on Unix with Softimage 3D for its CG software solution. For compositing we used Flame and Inferno also on Silicon Graphic workstations. The rest of the pipeline relied on a series of in-house applications (render farm, asset management, IO archives & back-ups, Sparks) that were built and supported by our R&D team.

Thierry Delattre (production VP): Tech checks (quality control) had to be split individually into 4 equal quadrants to reach a 1:1 pixel ratio to monitor before being re-assembled and transferred to digital tapes for delivery.

Pierre Raymond (senior advisor): Back then it was faster to FedEx a tape overnight than to upload clips on the internet. That lead us to create a p2p review solution using Silicon Graphic workstations based on software called ‘In Person’ created by SGI. The idea was simple, we would upload and sync the same clip to two locations and then simultaneously control two viewers. This communication tool was such a game changer that Hybride developed its own a PC/Mac desktop application called ‘Hysync’ a year later.

Yanick Wilisky: Robert communicated his ideas and vision by providing a mix of various concept and video recordings of specific actions and emotions that he wanted to convey through animatics, the precursor of previs. Daniel Leduc was also on location with the crew during main photography, which helped us to better understand the Spy Kids universe.

Philippe Théroux (CG supervisor): We were asked to elaborate new designs and ideas for sequences such as the Underwater SUV, the Mothership, the Radar Watch and the crumbling Puzzle Floors. I created a series of rough sketches followed by simple CG models comp’ed over still frames for review purposes.

An early foray into virtual sets

Daniel Leduc: Robert was definitely one of the pioneers of this technique. He rented an airport hangar in Austin, TX where he installed a permanent greenscreen/bluescreen setup for his projects. It allowed him to make amazing movies on a budget and in a controlled environment. It also gave more freedom to the actors, allowing them to film their scenes within a convenient and flexible timeframe.

Yanick Wilisky: Looking back, every project using a similar approach has had their fair share of challenges to overcome and it allowed the film industry to build the expertise. This type of effect is now mainstream and has led to the recent introduction of led walls. Filmmakers around the world are pushing boundaries on a daily basis – making their imagination their only limit!

Thierry Delattre: Robert designed the ‘Thumb Thumbs’ when he was 13 years old, and even won his first art contest with this peculiar looking character! He also had a very specific idea of how Thumb Thumbs should move, so he filmed himself acting like a Thumb Thumb! We then used those references to create the walk cycle and develop the character’s personality.

Joseph Kasparian (creative VP): Thumb Thumbs also came with an abundance of references for us to use, such as a practical suit and a miniature armature puppet that was built for digital capture by Troublemaker Studios. I used that same references to finalize the textures.

Philippe Théroux: Back then, a model could not be deformed as one mesh, it had to be built into separate meshes that were then assembled and rigged together seamlessly. Getting the textures onto each individual mesh so they matched proved to be quite a task!

Joseph Kasparian: Fun fact: A digital fingerprint of Robert’s thumb was used to create the head texture of the main Thumb Thumb model.

Yanick Wilisky: The entire show ended up being done in keyframe animation which allowed us more freedom when working on the interactions with the live actors. We came up with a display setup that allowed the artists to animate Thumb Thumbs in basic shading (vs. wireframe in the early days of CG), which was then overlayed onto the background footage in real-time within the software (Softimage).

Philippe Théroux: We were super excited to be part of the concept team for the SUV underwater thruster mechanism and the whale shaped ship. For the environment, Robert filmed underwater footage that we tracked to extend the live ocean floor as we followed the SUV deeper and deeper into the ocean.

A big challenge back then was creating organic looking CG bubble simulation. Process time for simulations was expensive and polygon counts were limited, so reflection and refraction settings for final renders needed to be meticulously planned in order to manage RAM.

Philippe Théroux: The jetpack sequence was also a fun challenge! The kids were filmed on bluescreen or greenscreen using wires and the background plates were a mix of miniature photography (tunnels) and live footage (exterior shots). Back then, cameras and props (in this case the jetpacks) had to be hand tracked and assembled in Softimage 3D.

Thierry Delattre: To overcome these challenges, we developed a series of tools: we first came up with a bluescreen workflow which involved balancing all chromakey to our reference shots before applying our key recipe. This process proved to be extremely efficient with increased output speed and quality. It allowed artists more time to work on their compositing and less time wasted on technical issues.

Yanick Wilisky: We also created a tool to transfer SRT data from cameras and objects (props) to our compositing solution. Once the data had been transferred, the compositors would use the null system to attach projection grids for final compositing.

Thierry Delattre: It is also worth mentioning that most shots in that sequence were re-timed (accelerated), which occasionally created artifacts that had to be painted out prior to final delivery.

Philippe Théroux: Robert wanted this sequence to look and feel like a kid’s TV show. The technical challenge was basically due to the large amounts of models required for the sequence and the limitations that we had at the time for such a task. It needed to be broken down into smaller parts and ended up being a giant “Floop” puzzle! 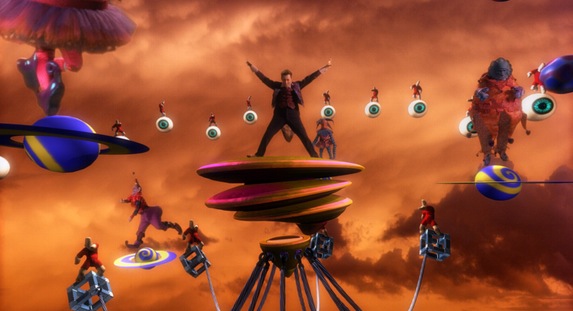 Spy Kids was only just the beginning…

Joseph Kasparian: For the next film, Spy Kids 2: Island of Lost Dreams, Robert first showed us RALPH as a practical model made by Troublemaker studio early on in the project. Once RALPH had been created in CG, Yanick Gaudreau, who had just recently joined the team, started texturing and lighting the character.

To match the live reference, Yanick developed a lighting process similar to today’s light field technique. It basically consisted of creating a sphere shape of hundreds of light sources linked to a texture map. This way, we could automatically apply color and intensity to each individual light based on its position in relation to the pixel value. Some extra controls were added later on, such has how wide the light could project and the softness of the shadow. We have to keep in mind that HDRI had not been developed yet.

Yanick Gaudreault (lead sequence): Back then, it was not unusual for artists to be generalists, so I also animated RALPH and that’s when the magic happened! He was so much fun, the simplicity of the bug-like robot allowed me to spend most of my time adding the little details which helped shape his character.

Yanick Wilisky: In short, the entire Spy Kids experience was fueled by creativity and innovation, and allowed Hybride’s team to really push its boundaries and pioneer new techniques.

Brought to you by Hybride:
This article is part of the befores & afters VFX Insight series. If you’d like to promote your VFX/animation/CG tech or service, you can find out more about the VFX Insight series here.