How the tools allowed César Turturro to take a real-time approach to ‘Invasion 2040’.

It was 2017 when Argentinian director and effects producer César Turturro embarked on his Invasion 2040 project, an ambitious live-action/animated short film and later a web series set in a post-apocalyptic world filled with classic aircraft.

At first, Turturro—who runs the small studio Creavision—jumped into the computer-generated characters and vehicles necessary for the project using tools such as LightWave 3D and Mixamo. But, he says, “there were many scenes that I was not going to be able to do because it was so complicated and I thought they wouldn’t look as good as I wanted.”

Then, deep into the COVID-19 pandemic, the director found a new way to deliver Invasion 2040—via Reallusion’s Pitch & Produce program, which saw the available tools expand to include Character Creator and iClone.

“With Character Creator 3 and iClone 7, a new world of opportunities were opened, more than I believed,” describes Turturro. “In the last week of post production I added a lot of shots, like the last shot of the trailer when a tooth falls near the character. Those kinds of shots you have in your mind, but you just don’t try if you don’t have the tools, the know-how, time or even money, to do it.”

Turturro adds that the Reallusion Pitch and Produce program gave him and his colleagues “a huge impulse of energy. You feel you are on the correct way. It’s hard to find support with this kind of content where I live. It’s not common to do sci fi-in my country. So, first at all, it was energy. And then obviously the economic and software help was fundamental.”

How the new tools were used

With Character Character 3, Turturro and his team crafted a digital human, adding some clothing and props like the UN Task Force content from the Reallusion Marketplace. They used ZBrush to adapt their existing armor and guns to the characters. “Then,” details Turturro, “using the same uniform, we created different characters using Headshot, where we re-created the exact facial shape of our real actors. In a short period we quickly created all of our squadron.” 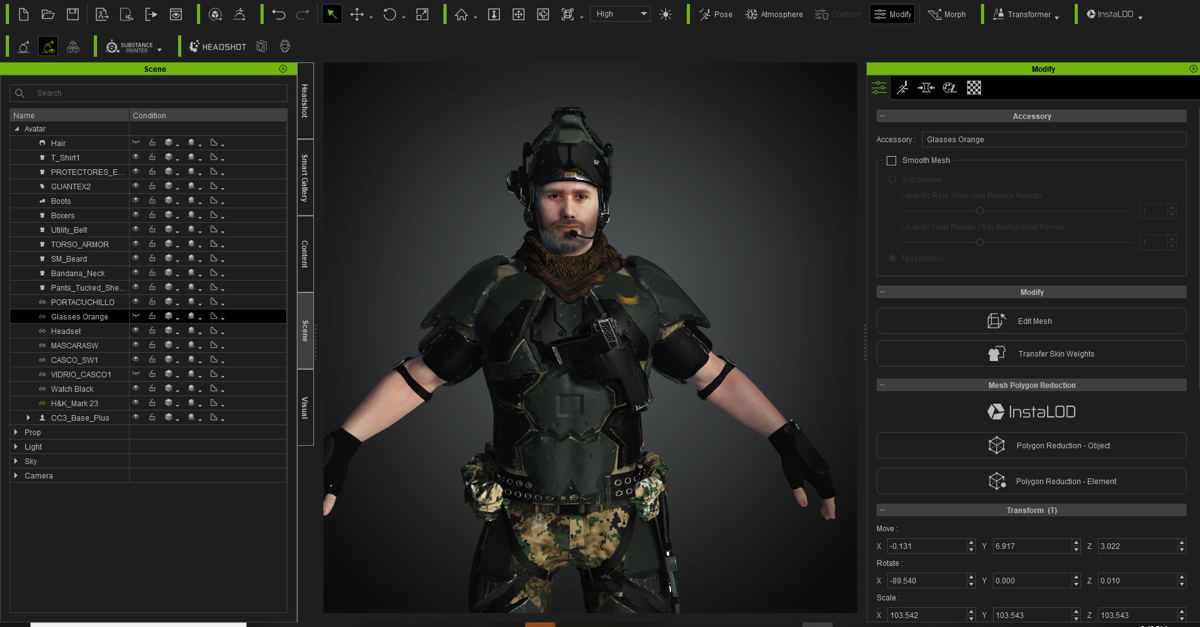 At the same time, the team adopted an Unreal Engine workflow, using the game engine in tandem with Character Creator 3 and iClone 7. “So, in months, a new world in VFX was born on our pipeline,” states Turturro. “Migrating is not always nice, it’s frustrating sometimes, you feel like you are losing time, or maybe it never works, but this huge effort was worth it.”

“The numbers don’t lie,” continues Turturro. “Before Unreal Engine and iClone, we did 150 VFX shots in four years. After Unreal Engine and iClone, we did more than 150 VFX shots in four months. The total shots on the short were approximately 200. We added 100 and replaced 50 between December and March 2020, with 3 artists, and all rendered on one GPU.”

Indeed, the combination of Unreal Engine and Reallusion meant the Invasion 2040 crew could not only complete more shots, but also work faster, gain better results and keep iterating right up until delivery, as Turturro points out.

“In the last scene—spoiler!—the final combat between the giant and the robot, I added that in the last days of post. This was a scene I had in my mind from the beginning of the project. I had only been able to do some takes, and used some of that for the trailer, but I couldn’t do the full combat. Then, at last, with our last effort, we did it. We added one minute of CG combat, which from the beginning I had dreamed about. This was possible because we had the tools, good characters, good animation sequences, and the iClone 7 pipeline allows you to do these kinds of shots, so fast.”