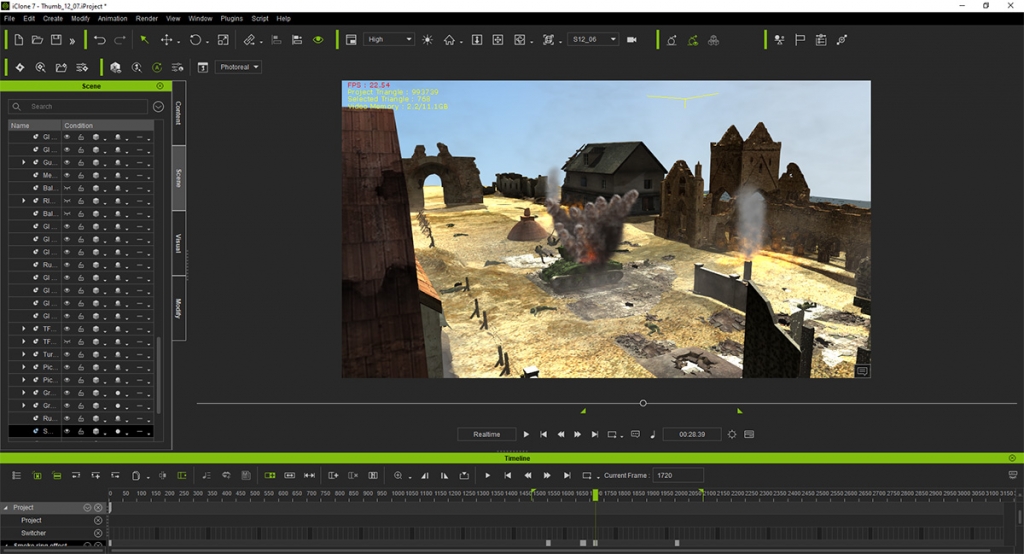 The Indian war series The Forgotten Army – Azaadi Ke Liye premiered on Amazon Prime India in January this year. Directed by Kabir Khan, the true-life series follows soldiers in the Indian National Army led by Subhash Chandra Bose. It was a mammoth undertaking to film and a highly watched production, with the trailer alone garnering 23 million views on YouTube.

For intense scenes requiring depictions of battle and other action scenes, previs director Mohammad Khalikh came on board to previsualize them. Reallusion’s iClone was Khalikh’s tool of choice, using Character Creator to build key characters and the animation tools to lay out key beats. Here’s a look at how he pulled it off.

How the previs worked

Khalikh worked for Pre-Production Company, founded by Kamal Sadanah, on the previs for The Forgotten Army. Supervisor Gigi George worked closely with a team of four artists – Shilpa Hegde, Manpreet Singh, Philip Verghese and Khalikh. Each artist concentrated on specific shots in the series.

Khalikh own work in previsualizing The Forgotten Army scenes sits alongside much of his other previs for Indian features films, TV shows and commercials. He sees his role as “making sure what is possible to shoot and what isn’t through virtual cameras and 3D animation.”

In addition, says Khalikh, “with a clear vision of how the film is going to be shot in the previs stage, it becomes easier during the production of the film which also helps in scheduling and reducing the cost of production overall.”

The previs brief for the series was to help plan action sequences featured in two episodes. “We were briefed by the action director Sham Kaushal to create the whole feel of the scene where the bravery and sacrifice of the Indian soldiers were to be highlighted in the action sequences,” outlines Khalikh.

“The key aspect of the previs was to see the flow of the action in the scene with specific camera angles and emotions so the Amazon Prime production team would get a clear idea of how the director is visualizing the whole storyline.”

The work began with asset creation. Here, Khalikh received reference of the principal actors who would appear in the series and then used Character Creator to create the main characters and extras.

One workflow the previs director followed in generating characters was to start with a low-poly character from Makehuman, converting that into an object with multiple perform animations which were made into hundreds of soldiers attacking the Indian army. “Now with the new features in Character Creator, it is easier to make low-poly models using the LOD feature,” Khalikh notes.

The environments in the previs were built based on the location scouting image references from the filmmakers. “Some of the assets were actually available at the iClone marketplace,” notes Khalikh, “which made it easier than creating the assets from scratch.”

There were several fire, explosion and gun fire effects required for the previs, too. For some of those, Khalikh relied on popcornFX to craft the explosions in war scenes.

The role of iClone: previs’ing, fast

Khalikh has been an iClone user for three years and says the software is extremely well-suited to previs. “When it comes to previs, we don’t require final animation; iClone is the best software for previs because of its real-time renders and the use of motion-captured files.”

After delivering the previs for The Forgotten Army, the filmmakers used it as a direct guide for storytelling and establishing the flow of shots in the scenes.

“They used it on the sets as a reference for the action director, director, and cinematographer which made all of the crew members to be on the same page as envisioned by the director,” details Khalikh. “In every aspect, iClone has helped me in creating the best results.”

You can find out more about Reallusion’s iClone 7 at https://www.reallusion.com/iclone.

Sponsored by Reallusion:
This is a sponsored article and part of the befores & afters VFX Insight series. If you’d like to promote your VFX/animation/CG tech or service, you can find out more about the VFX Insight series right here.