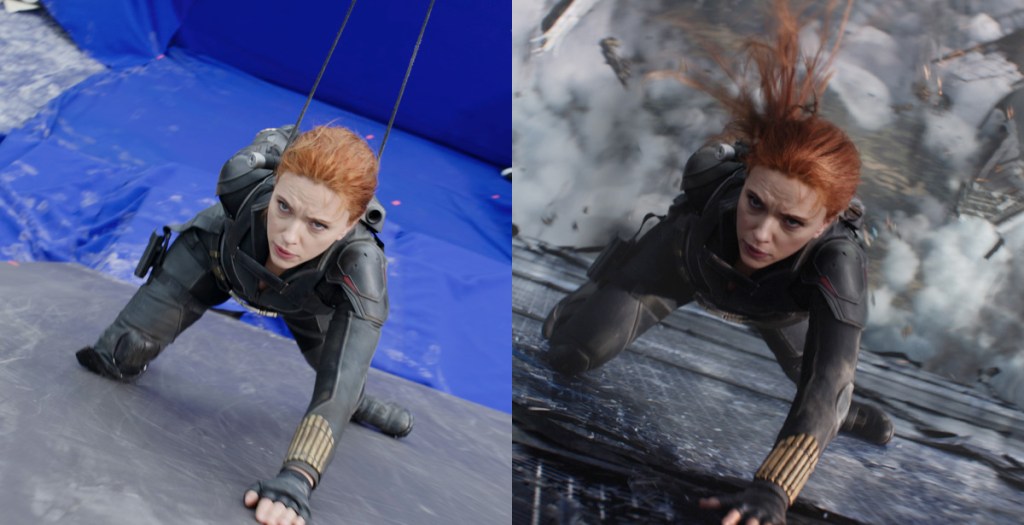 Spoilers! Digital Domain does a deep, um, dive on their visual effects for this sequence.

The thrilling conclusion of Black Widow sees the destruction of Dreykov’s aerial Red Room. As it breaks apart and falls to Earth, Natasha Romanoff (Scarlett Johansson), Yelena Belova (Florence Pugh), Antonia Dreykov (Olga Kurylenko) and several others grapple through falling wreckage and eventually skydive and parachute down to the ground.

Orchestrating the visual effects work behind that sequence was Digital Domain, led by visual effects supervisor David Hodgins, working with production VFX supe Geoffrey Baumann. The task was enormous: blow up the flying Red Room, place live-action actors and digi-doubles amongst the falling wreckage, craft clouds and sky and ground below, and, then on ground-level, reveal the aftermath.

To get a sense of how all those VFX requirements were necessary for the scene, befores & afters spoke to Digital Domain digital effects supervisor Hanzhi Tang, who broke down how each different element came together. Spoilers below!

Hanzhi Tang: We knew the entire Red Room needed to be destructible which mean, going into it, that we had to build it a certain way. We went back and forth with FX on it. They gave us all the ground rules for the modeling, and we had a really good modeling lead who was very familiar with the constraints that you need to work within. All the geometry needed to be closed and prepped for either shattering or rigid body sims and destruction. 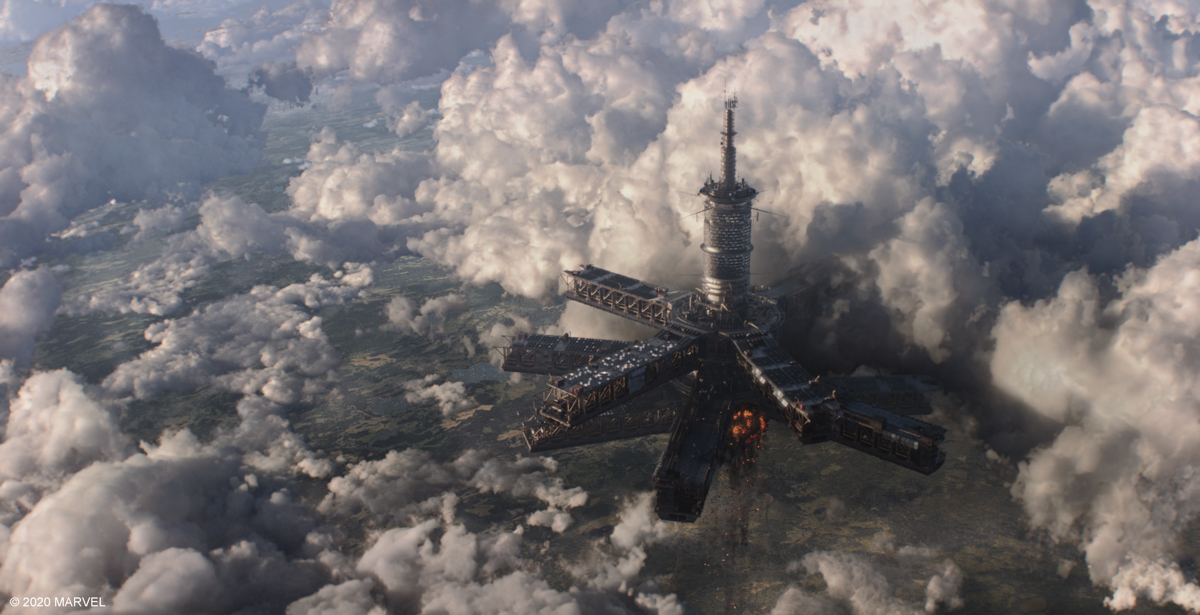 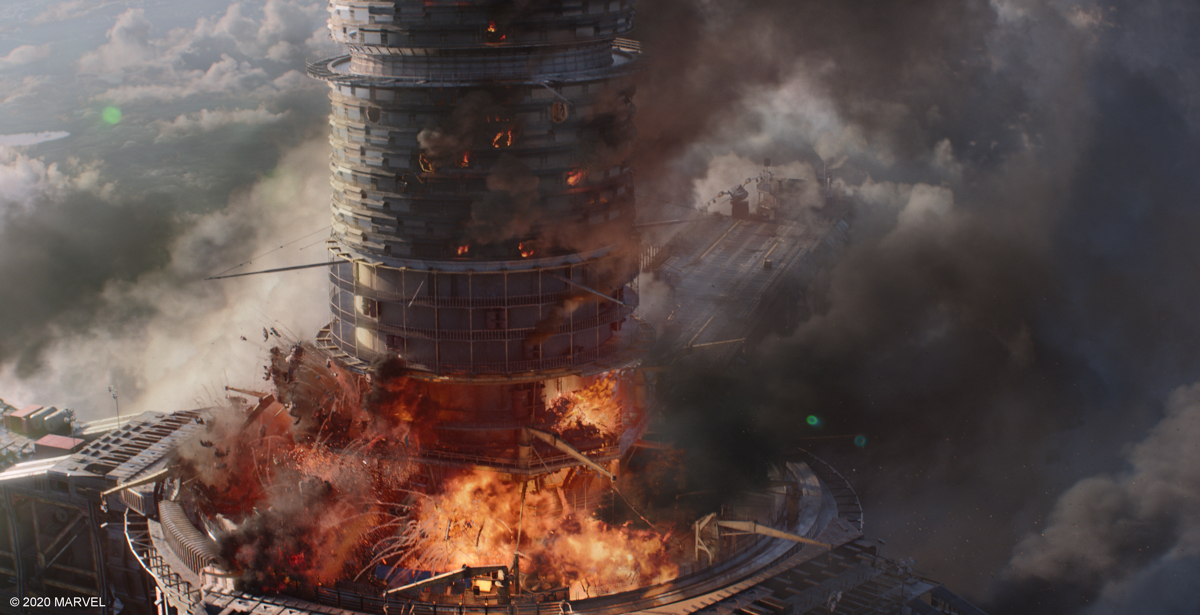 The other part was making sure that this thing was even renderable. I think FX in Houdini can generally handle that kind of volume quite easily. Once you get that into lighting it can be problematic as far as RAM use, especially when you’re trying to essentially path trace this whole thing. So we built it to be highly instanced, to minimize the memory footprint. We continued to use GPU rendering with Redshift, since we’d had a good experience with it on Captain Marvel.

For the falling debris, we made a separate library of pieces of the Red Room. We had FX help us by shattering and doing some of the destruction, and just giving us some of the pieces. There’s a lot of pieces that were also hand cut out of the main model, and then published as its own separate asset.

The tricky part was really just tracking them through all the shots, and making sure that the big hero pieces that are recognizable are consistent from shot to shot. Some poor person needs to think about that, sit down think and about it, and make sure it’s consistent. There are some really unsung heroes in layout.

Production actually got real skydiving footage with some stunt doubles in their costumes. That footage was really useful because you had a good sense of the motion, just the camera angles of trying to following someone skydiving, and then the camera moves were really cool, something that would probably be quite difficult for an animator to imagine what those kind of those movements are like and still be realistic. Those were really good to either just copy for matchmoving and tracking, or to use as inspiration for how frenetic the camera shake is, and the idea of tracking someone who is flying towards you and then past you. 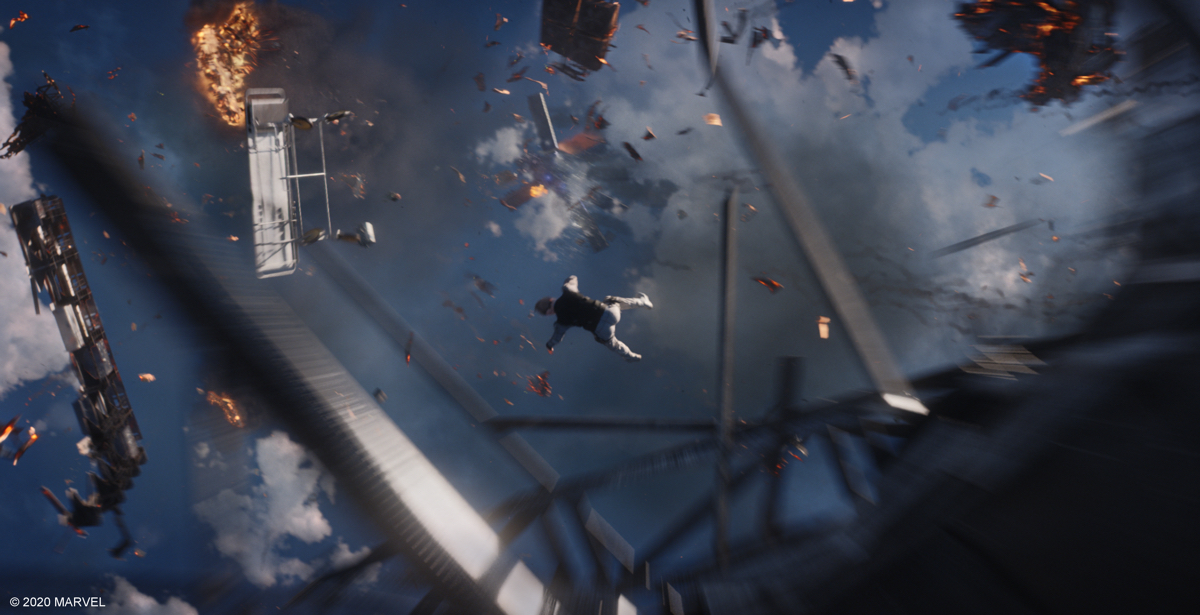 They had one of those indoor skydiving/wind tunnel set-ups, too. They got one of the biggest ones you can get. It didn’t have a tube in it. It was just the fan, so you could actually have skydivers and camera operators perched on this thing. You could get a shot from underneath of someone floating six feet above you.

They also had Scarlett Johansson in a robot arm rig for the close-ups on her face. It was a pre-programmed extension motion control robot arm that was pushing her around, where she’s fixed at the waist, so then we had to do a digi-double from the waist down.

Then there were digi-doubles. Production provided texture photos and the body scan, and then I think DD was tasked with being the primary asset build on Natasha and Taskmaster which was then provided to other studios. Clear Angle Studios was the vendor providing the scans and photography.

3. Clouds and the ground below

As far back as the artwork we first received, this sequence was going to happen near sunset with the sun hitting that golden hour. So we had to figure out, for the fall, all the different atmospherics and how the lighting changes as we drop through it. 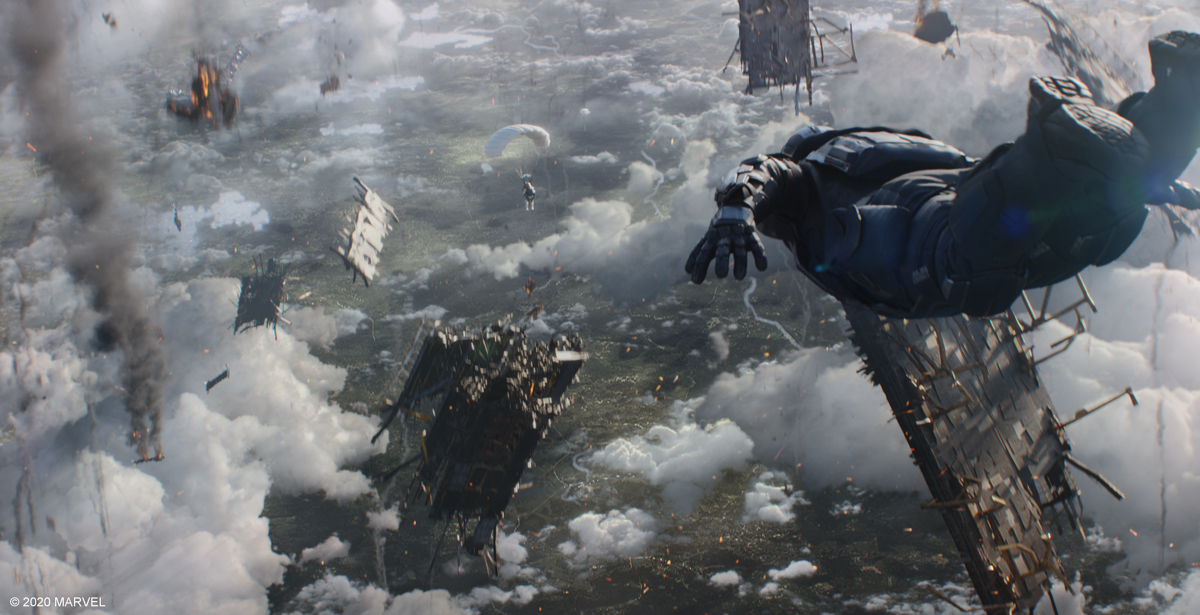 My go-to is always get it on a whiteboard. I know it’s really low-tech solution, but you just talk about it with everyone. You know, ‘Okay, with these shots, are they supposed to be in cloud or above the clouds, or out of the below the cloud base, and now they’re just like free falling to the ground?’ That’s how we just try to figure it out the lighting and look for each part of the sequence because just laying out the clouds required, and keeping it consistent from shot to shot needed a lot of work just tracking.

We had three people just doing cloud layouts. I thought making one master cloud layout would work, but they all needed customization in the end. You’re reviewing each shot making sure that each one is aesthetically pleasing as far as where the clouds are. We started by creating a bunch of hero cloud formations and shapes. Some of the cloud shapes ended up being from Terragen just to generate cloud volumes, then we took those VDBs into Houdini. 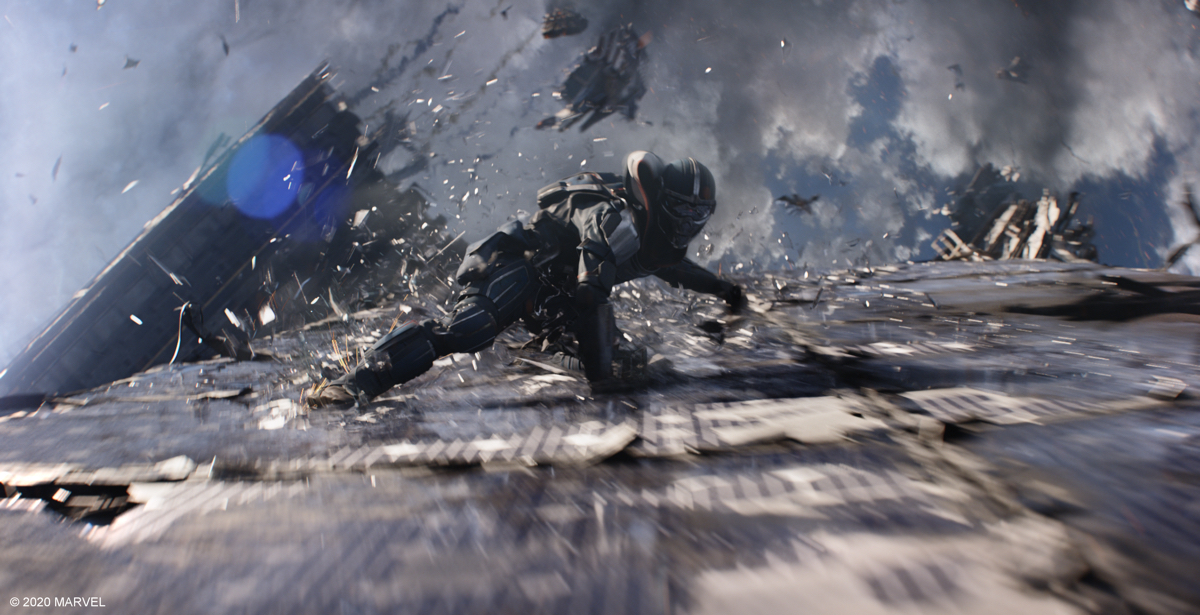 The far background sky is an HDR that I took. It’s off my roof, on the top of my building. It was very close to the lighting there that they were going for. Plus, the top of my building is flat. It’s gray. It’s got satellite dishes on it. So that served pretty well as far as an HDR goes to light the Red Room.

The ground was based on satellite photography of the location that we then used as a base to paint on, adding clouds and all the burning ground features.

For the ground-level shots, they filmed just on an open field. They built a small section of set with a large truss piece and a couple of large chunks of debris in the foreground. They had some flames coming out of gas lines and parachutes waving around. Beyond that, it was just open grass which we needed to either paint up as charred areas or add flame elements, which you then have to get to go behind the foreground grass, so it was a lot of roto work.

There were dirt bombs going off in the background so we tried to create a library of those and use all that stuff on cards in comp. We built a Nuke set-up for that full area, and were able to photograph different angles pretty quickly once we had got that set up.

There was some additional photography as well months later for some of the ground shots. The Taskmaster fight with Natasha on the ground is quite different from what was originally envisioned. That new fight was shot at Disney Ranch in LA after the fact. They dressed up the dirt to look like the field in England, but it was more like a 20 by 20 foot patch, with bluescreen. So we needed more set extensions for this.

Just finally, there’s a top-down shot of Taskmaster and Natasha fighting, and it’s in slow-mo, as the sword comes over. In that shot, they’re both CG.