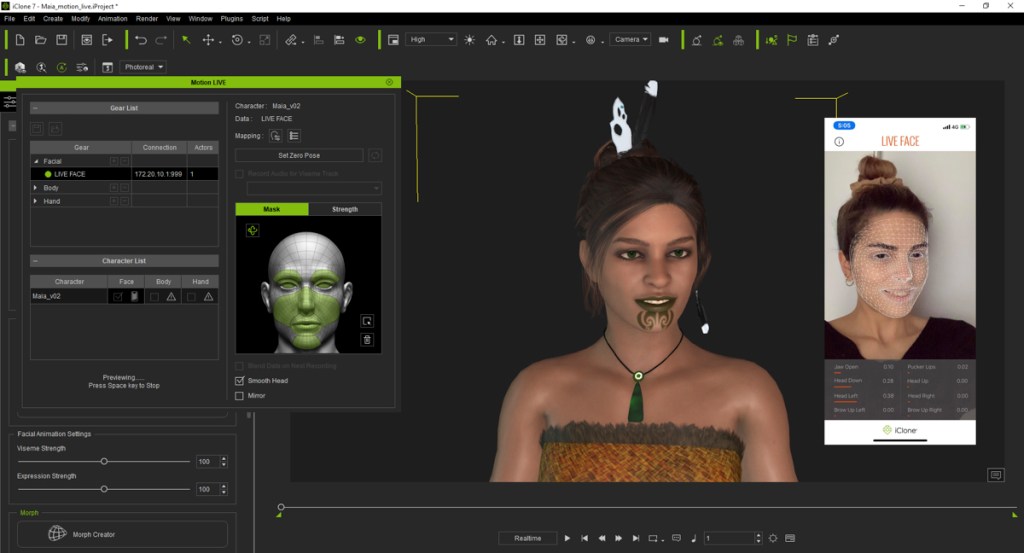 When Maru Nihoniho wanted to create an animated piece of content to help pitch a game based on the mythology of Māori culture, she did not initially know what tools to use to craft convincing characters and a dense world for the game.

But, through her studio Metia Interactive, she discovered a workflow that incorporated Reallusion’s Character Creator and iClone pipeline, coupled with Unreal Engine. With these tools, Nihoniho has been able to build the lead warrior character Maia and deliver a cinematic-level animation that showcases the planned world of the game.

befores & afters asked Nihoniho about her journey in crafting the idea for the game and this dynamic piece of animation.

b&a: How did your ‘Guardian Maia’ originally come about?

Maru Nihoniho: About 18 years ago I started a games development company here in Auckland. And the first idea that I wanted to develop was a game called ‘Guardian’. It was a story based on a Māori woman and a dystopian future, bringing all these cultural elements into gameplay.

As I found out quickly, if you haven’t made a game before, then it’s really hard to get anywhere with anyone. You have to really have something under your belt. But here I was, somebody fresh out of nowhere, coming out with this huge idea to make this huge project called ‘Guardian’. There was actually a lot of interest, but the interest stopped once they found out that I hadn’t made a game before. Also, the amount of funding that would be needed to make a game like that, it was just out of scope. I mean, I don’t blame them. I must have looked like risk alert, big time. Why should they give me money? So, it didn’t happen.

People in the industry said, ‘Don’t give up, but think of something else that is more manageable.’ So I went back to and created at a smaller puzzle game, and then that was published on the PlayStation Portable. It was the complete opposite of what ‘Guardian’ was—no characters, no huge storyline. We didn’t need to spend an awful amount of time on creating game assets or anything, because it was just a small puzzler. But, it worked, and that really was the start of my career in game development.

b&a: How did that then lead onto the Guardian Maia project?

Maru Nihoniho: Well, I’ve been chipping away at what is now called ‘Guardian Maia’. In 2018 we released an interactive fiction called Guardian Maia – Episode 1. It wasn’t long after making the interactive fiction where I thought, ‘I really want to visualize this. I really want people to see what the world could potentially look like. What is something manageable that I can do with the team that we have?’, since we’re a small team.

That’s when the idea of creating an animation came along. We spent time just looking at different pipelines to build and animate characters. I was just looking for a solution, something that I could learn myself.

I came across Reallusion’s Character Creator and iClone. I picked it up really quickly. I was just like, ‘This is pretty easy.’ Everything was rigged. We could customize as much as we wanted to. It wasn’t like, ‘Oh, we can’t do much in here.’ You could really do a lot. We customized textures and brought in our own FBX files such as clothing or props. We could also rig our existing character models and bring them into iClone. So it was really perfect for what we needed to do which was to create an animation in a short amount of time with a small team.

On top of that, we also had to learn Unreal Engine. We are Unity developers, mainly, so we had to learn how to use Unreal and also Live Link. The cool thing was that we could make our character in Character Creator, bring it over into iClone, and then use a mixture of iClone’s motion files that were there already, plus our own motion capture. Once we were fairly happy with the animation, you just literally click a button and it plays it in real-time in Unreal Engine so we could see what it looked like.

b&a: What did you find were some of the aspects of Character Creator and iClone that were really beneficial for you in doing this?

Maru Nihoniho: I think the best thing about Character Creator was being able to customize your characters, like really absolutely customize them. And if you couldn’t take it any further in Character Creator, you could take them over to ZBrush and add more detail.

The most convenient part of all was that the characters are already rigged. The other convenient thing was being able to use motion capture that wasn’t our own or iClone’s. So for example, we used a couple of motion files from Mixamo and edited those with our own mocap files. It was just really convenient what you could do.

I really enjoyed playing with the morphs that you could change for the characters. We have the character called Maia who is a human character. We also have these forest troll-like characters that are Character Creator characters as well. They’ve just been morphed to look completely different. It was just really easy to use once you got used to where everything is and what everything does. We also used Headshot, which was helpful for some of the texturing with skin. Again we could take the maps into Photoshop or Substance and customize further.

And we also used the SkinGen plugin for some texturing. I used that to add scars and some texturing, and especially for the monster characters in the game. They’re not overly done, but enough to give them some scarring on the face. That was really easy to use as well.

b&a: What have you found has worked well doing things with a game engine approach?

Maru Nihoniho: Using Unreal Engine was a really conscious decision because we actually want to use that to make the game. Another reason why I made the animation, it’s because I want to use it to pitch for funding. I want to show a proof of concept that, what Maia’s world looks like, what she looks like and what some of the characters look like, it’s also to prove that we can do it.

b&a: I was going to ask you what the planned end result was. Will any of the animation you’ve done here be part of the game, ultimately?

I’m really hoping that the work we’ve done with the cinematic will not just show the unique aspects of this Maori woman running around in a New Zealand forest—because that’s the only a small part of the story—it’ll also show that we are capable, as a team, to achieve what we want to do.

To find out more about Reallusion’s iClone and Character Creator, head to their website.

Buy issue #2 of the magazine

Big news! ISSUE #2 of the mag is out! Order now Dismiss