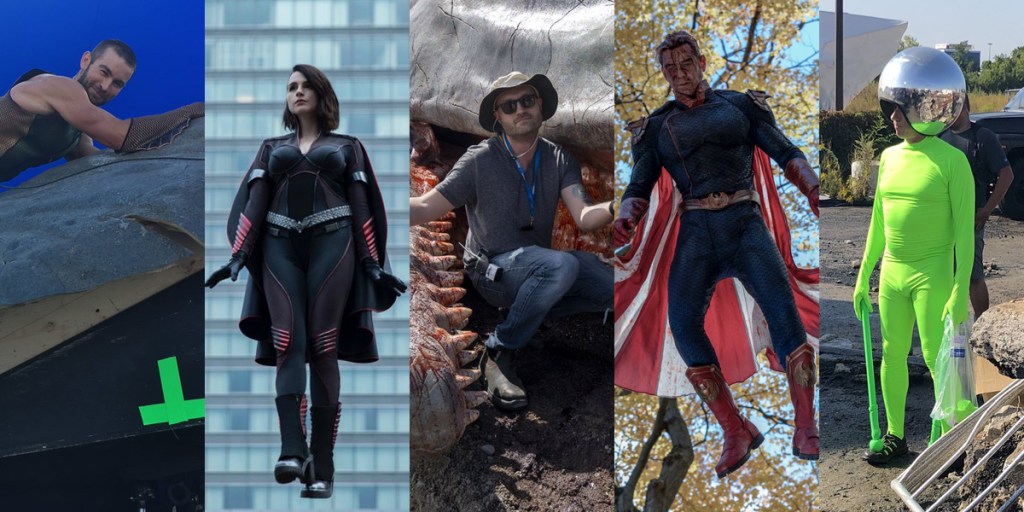 befores & afters was in the room.

“Then what happens is they have a conversation inside the whale…”

I’m sitting in a dark room in a set of offices in Santa Monica. On a large screen in front of me, I’ve just seen a speed boat that has crashed straight through a whale.

Crashed. Through. A. Whale.

It’s January 2020. The COVID-19 pandemic hasn’t hit yet, and I’ve been allowed to sit in on a VFX review session for season 2 of Amazon Prime Video’s superhero-genre-flipped show The Boys.

Production visual effects supervisor Stephan Fleet is describing what happens before, during and after the whale crash, while also reviewing the work-in-progress shot before him that has been delivered by Industrial Light & Magic, one of the show’s several VFX vendors.

I’m seated on one of the couches in the room. Next to me is visual effects producer Shalena Oxley-Butler, and next to her is Fleet. Also present are VFX editor Dane Collier, who will play through the shots today, and VFX co-ordinators Kat Greene and Rachel Allen, who furiously record copious VFX notes on their laptops during this review.

This session is all about allowing Fleet and Oxley-Butler to review dailies received from the visual effects vendors and provide notes on the work-in-progress shots. They’ll also work out which shots might be ready to take to showrunner Eric Kripke for his insights.

It’s a fascinating process and one that I rarely get to see. As an outsider coming in, some of what goes on is completely bamboozling, especially following things like shot numbers and keeping track of the notes. And, of course, I typically only get to see a very small part of the action, although they do play the whole whale scene for me.

The room hums like a well-oiled machine as we wade through what seems like an extraordinary large number of scenes, all requiring feedback and action-items in order to get to a ‘final’. Indeed, this season the team had an incredible 1200+ shots to deliver over eight episodes, with the first ep premiering on September 4th, and the season just wrapping up with a thrilling showdown.

So, what did I get to see in this VFX review session? Well, there’s that crazy whale sequence, which was also released as a ‘first look’ clip before season 2 began. “This has never been seen in the history of television,” advises Oxley-Butler, brimming at how the impressive sequence has come together.

Watching it in that room, I’m quite sure it hasn’t been seen before, and I have to say that seeing a speed boat crash through a whale made me drop my notebook. It’s shocking and fun and fits fantastically into the world of The Boys. I look around the room at that point with my mouth open, but Fleet has already moved on to a new shot. “We’re so used to this stuff in the show,” he says, casually.

A different and equally shocking moment I’m shown, also mouth-dropping, is a scene in which Homelander tears a man’s face off. It inspired this note from Fleet: “This is looking too conservative. We’d like to see more ripping and tearing.”

In fact, ‘notes’ are perhaps one of the most interesting aspects of these VFX review sessions. The notes need to be succinct, but also communicate any clear changes required for the next shot iteration. Fleet and his team manage to have some fun with them, as well.

“I think we need to pull back on the dust a bit in that shot,” Fleet observes in relation to one action beat.

“Do you want to give the vendor a percentage for that?”

Later, a shot from Rising Sun Pictures, which is based in Adelaide, Australia, comes up. I distract the VFX team in the room by telling them that many Aussies, like me, call the city ‘Radelaide’.

“Because of rattlesnakes?” asks Fleet.

“No, sorry, RADelaide, like ‘super-rad. It’s a cool place,” I offer. The room goes silent. I suggest they mention it to the RSP team in their next cineSync call.

Maybe they did. (They probably didn’t.)

Meanwhile, we’re racing through some incredible shots in this VFX review, and they really do run the full gamut, from monitor comps—“These sometimes take the longest to approve,” notes Fleet—to much more extensive fight scenes.

At one point, a character flies through the frame as the team examines the VFX work. “This is our super-cool super-secret new character Stormfront,” says Oxley-Butler, referring to the new supe played by Aya Cash. “Don’t tweet that.”

As the VFX review session winds up, a few more outrageous and hilarious scenes go by. It’s clear to me right there that season 2 has significant effects work, and Fleet notes that the show has provided some of the most challenging, but also satisfying, VFX, in his career.