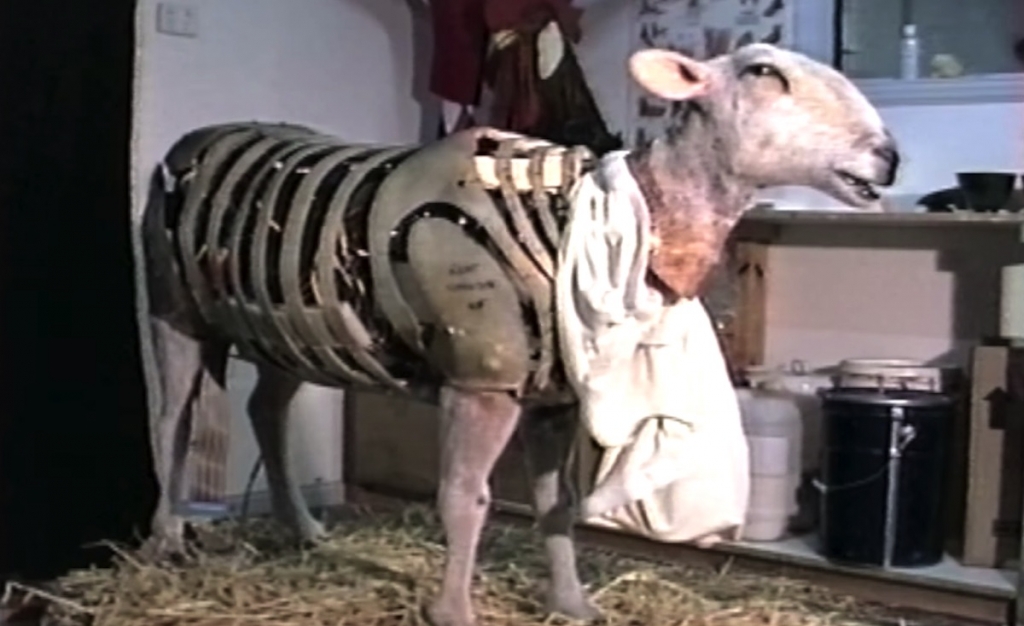 Plus other fun sheep stories from the movie, currently celebrating its 25th anniversary.

I’m excited this week to be talking to the VFX Oscar winners from Chris Noonan’s Babe. The George Miller film has just turned a quarter-century, and befores & afters is celebrating the practical and digital effects that helped usher in a whole era of talking animal movies.

Key points:
– Kangaroos and sheep are kind of similar…who knew
– The near-disaster with shorn sheep fleeces that involved latex
– Real and fake sheep and the art of flock synchronicity

First up is John Cox from John Cox’s Creature Workshop, one of three companies behind Babe’s animatronic animals. The Workshop, based in Queensland, Australia, was responsible for delivering the sculptures and finished skins for the practical sheep (among other farm animals) in the film, with fellow Australian company Robotechnology crafting interior animatronics and control interfaces. Performance control systems and puppeteers were supplied by Jim Henson’s Creature Shop in the UK.

Cox shares with befores & afters some fun memories of the production, including how his quest for ‘real’ sheep fleeces nearly resulted in disaster, as well as some of the shenanigans that went on between takes involving the fake sheep that many mistook for being real. He also reveals how it was actually work on animatronic kangaroos that led to…sheep.

How VFX and animation studios are using virtual workstations today

Why roos look (and act) kind of like sheep

John Cox: I’d actually done a prototype animatronic kangaroo for another film, working with Robotechnology. It was for a project called ‘Kangaroo Kid’ that cinematographer Dean Semler was going to direct. The film fell over after a couple of months, but we had shot a test.

Meanwhile, I had been approached 18 months previously by Kennedy/Miller about this talking farm yard animal project they had. So, I sent the footage down to them. They said, ‘Oh you have to work on this film we’re doing.’ It took months before anything happened. We essentially split the animatronic work 50% to the Australian contingent, and 50% to the UK.

So we had done the kangaroo with Robotechnology and it turns out sheep are essentially the same head, pretty much. There’s very little difference in the musculature, the ears and placement of all the features. Everything was basically the same. They even chewed the same! It was a kangaroo head on a different shaped body that was just covered in fleece.

We had almost a year to both plan and then start building the sheep, and my plan was to get a whole heap of real sheep shorn in a very specific manner when their fleece were exactly the right length that it would have to be to match the real sheep that we were going to be shooting with. 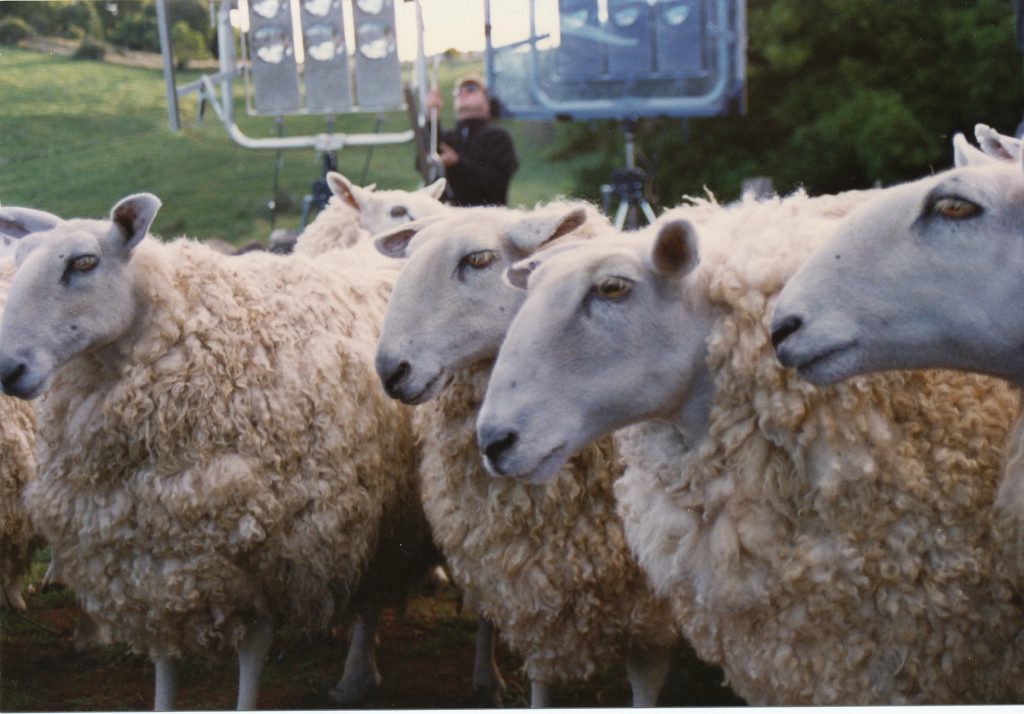 I went down to somewhere near Bowral in New South Wales where I had to get all the sheep shorn. Then we transported them back up to Queensland. I had a large frame made up so that we could lay each fleece flat out on that so they wouldn’t get kicked or knocked or picked or contaminated in any way. That made it really easy to transport all the fleeces.

But, one of the things I didn’t take into account was the 1000 kilometer drive. What happened was, the vibrations through the vehicle basically made the fleeces settle and slowly spread. When I got them back up to Queensland, they were a little bit bigger than what they started out! It was OK, though, because I could push them together a little.

However, something worse was coming. My procedure was going to be to spray the back of the fleece with latex. Now, I still can’t believe I hadn’t thought it through properly, but what I failed to recognize was that the instant you put something like latex onto fiber, you turn it into a solid carpet! In my mind, it would just fall back over the shape of the fiberglass sheep body. It didn’t, it stayed like a flat carpet!

It had no bend in it whatsoever because the latex had penetrated all the fleece fibers so much that it just bound it together like a solid rock. I had to come up with a completely new way to achieve this. I ended up having to make a bigger mold of the sheep’s body and then laying the fleece into the shape of the body while supporting one side of it, and then spraying that side of it, and then flipping it over and doing the reverse and spraying that. What started out as being something that I considered to be real simple became quite a labor-intensive job.

We found out quite early on that if we got the robot sheep to look to the right, all of the real sheep did exactly the same thing — they all looked to the right. It’s flock mentality; they’re all looking for what’s coming to eat them! We were able to get a lot of flock synchronicity by having the robots do a certain thing. 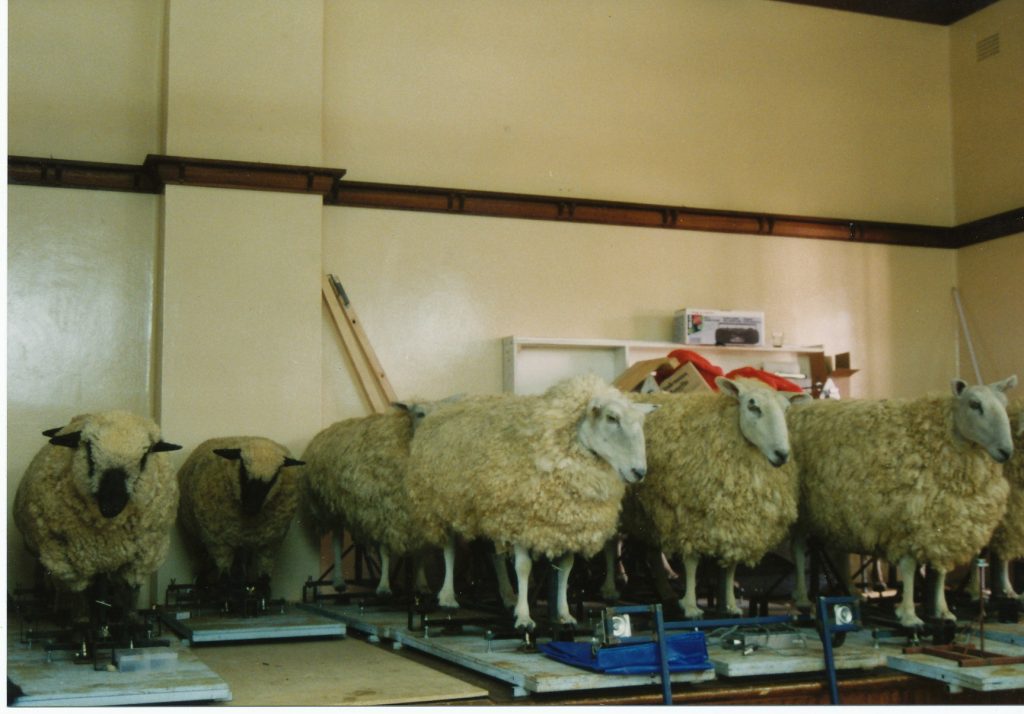 For example, in between takes, in order to keep synchronicity, the trainers had a long pole about a meter long with a little plastic cup on the end that had some food in it. They would go around and just feed the sheep in-between takes. And I tell you what, more often than not, they would put one in front of the robot sheep, because they couldn’t tell the difference!

The performers/puppeteers were always watching for this. So they’d operate the robot sheep to appear to be eating out of the cups as well, and then they’d look up and talk. That kept us all quite entertained.

Sometimes over the headsets, you’d hear Chris Noonan say something like, ‘Can someone go and check the wiring on that sheep? The one third from the left over there, he’s not moving.’ And one of us would go out and, sure enough, it was a real sheep. It was just stoned! It was just locked into looking off into the distance and not moving at all. And so the trainers would come over and give it a little prod and the sheep would come back awake and look around.

Coming up next in our look-back at Babe…Neal Scanlan and the Jim Henson’s Creature Workshop contributions to the film.