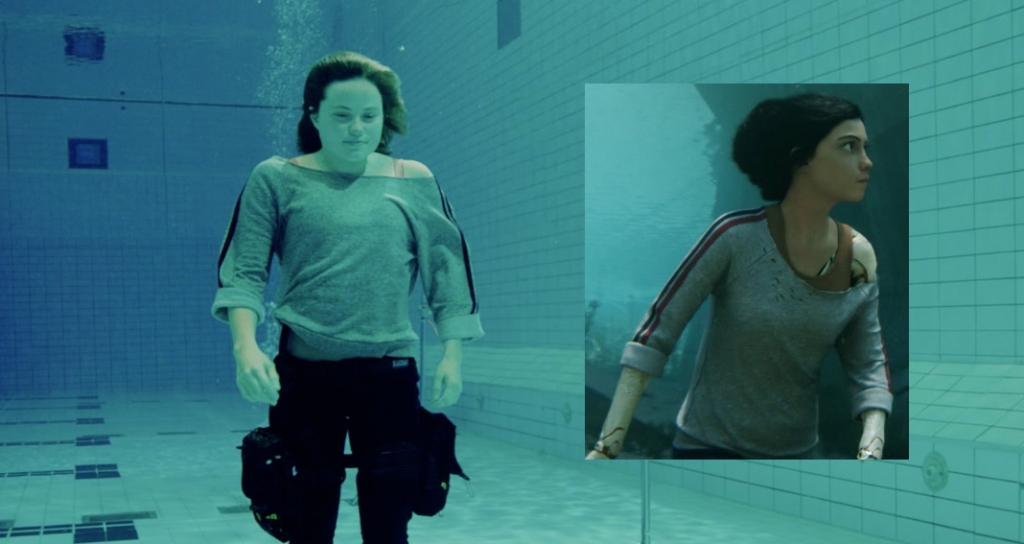 Can you hold your breath for six minutes?

For Alita: Battle Angel, Weta Digital made several leaps forward in terms of performance capture and CG humans – areas the studio is already well-known for.

As much as possible, the studio would also always look back to the original performance of actress Rosa Salazar, or, in the case of a scene in which the main character jumps and walks underwater, to reference specifically filmed of a free diver doing that at the bottom of a swimming pool.

I sat down with key members of the VFX team to ask them more about this live-action underwater reference and the final shots. Plus, check out this bonus free diver reference that also shows the final Weta Digital shots.

Eric Saindon (visual effects supervisor, Weta Digital): What we did was, we got a free diver in New Zealand who had gone through the same process that a lot of the divers and the actors on Avatar are doing now. And she could hold her breath for a crazy amount of time, like six minutes!

We put her in the right costume and hair and put her on the bottom of the pool with weights on her feet and got her to go through the whole motion of the scene. Things like turning her head, walking, doing everything she had to do, so that we had perfect reference for the motion, for the motion of the cloth, for the hair, for everything.

Richard Baneham (visual effects supervisor, Lightstorm Entertainment): The viscosity of water is like 800 times more dense than air. And so, everything changes underwater. Plus you have to consider buoyancy and all that kind of stuff.

Richard Hollander (production visual effects supervisor): Our medium – the lake she goes into – was also more dense. And so ultimately she had a different way of walking through. But still, that was important footage. Everybody looked at that footage.

Mike Cozens (animation supervisor, Weta Digital): Our goal was to understand how a body reacts to the viscosity of water and what results you would get on cloth and hair. We’re always digging into, how do things behave and what is the physicality of any one moment?

Richard Baneham: It’s tricky because there’s a lot of good underwater photography out there. And so, on a subconscious level, the audience is very, very educated. They may not realize it, you may ask them, ‘Does it feel real or not?’ They might say they wouldn’t be able to tell you, but they Goddamn can. And as soon as you’re wrong, they feel it. So it’s incredibly important to get what seemed like throwaway effects – the way the water ripples over the cloth, say – as a starting point. You need to get that right, or they’ll feel it’s off.