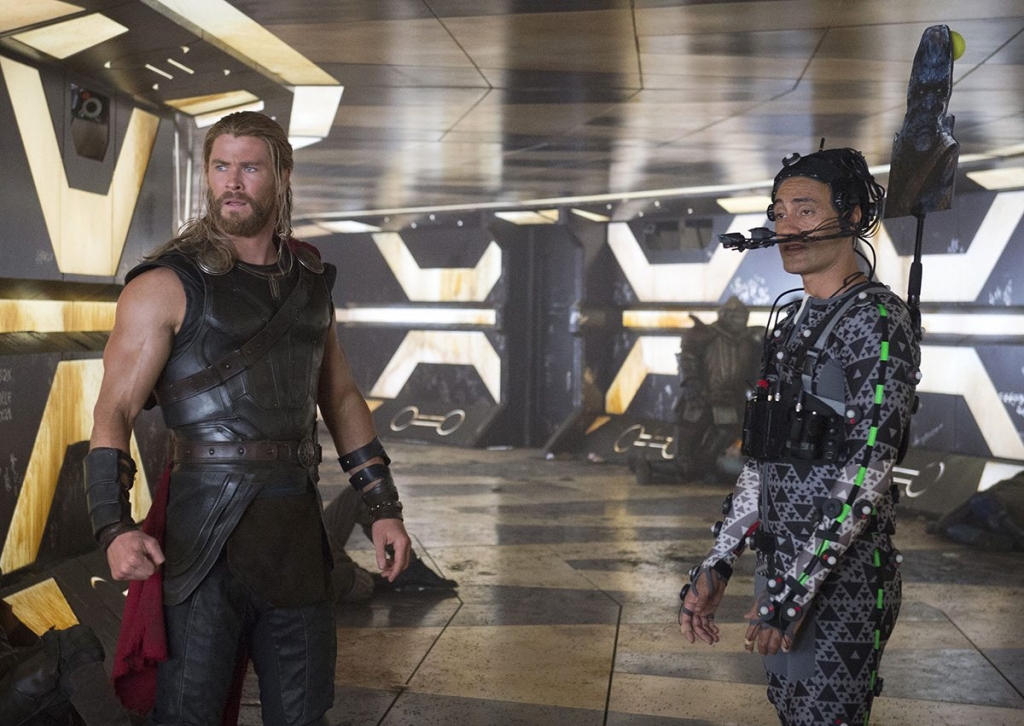 Usually, it’s actors who don motion capture suits, but here’s where the director suited up instead.

Today, CG characters brought to life with the aid of performance capture of an actor tend to rely on full body and facial capture done directly on-set with that actor, or in dedicated sessions. But it’s not always like that. Sometimes, of course, stunt doubles perform extra mocap work, or actors are only facially captured for voice over purposes.

And then there are times when the director jumps in themselves to be motion captured. As part of #mocapweek week, befores & afters re-visits these times when directors donned motion capture suits to help flesh out or inform the performance of their beloved characters. 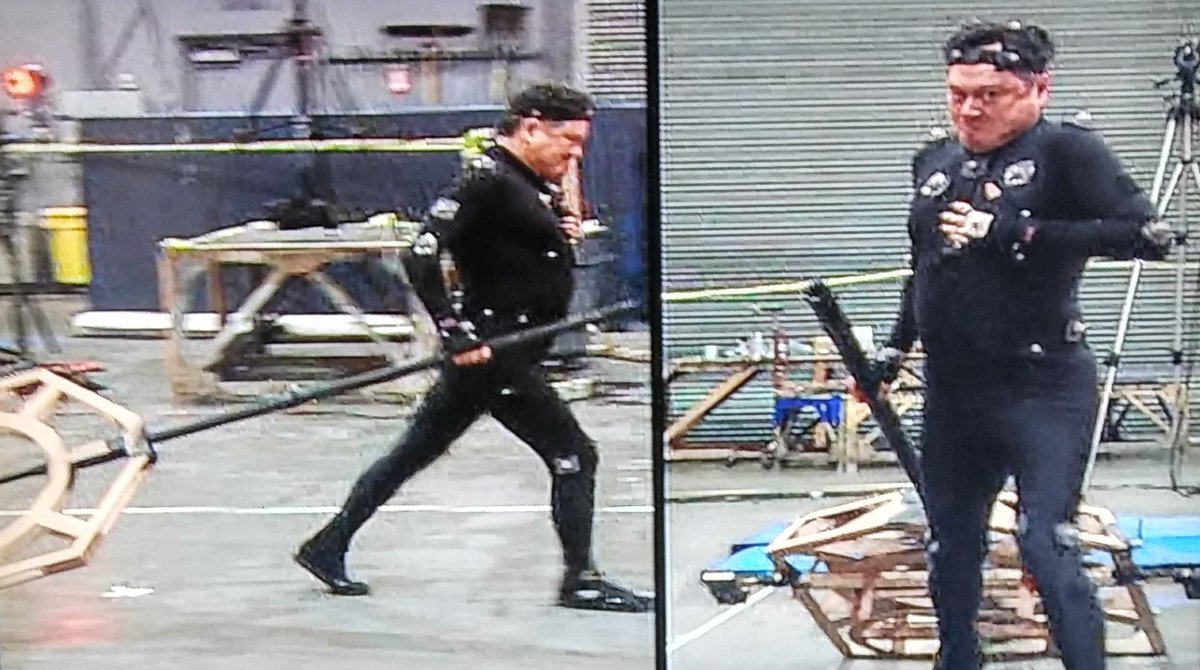 While Hulk in the current Marvel Cinematic Universe is driven by and looks similar to the actor Mark Ruffalo, that wasn’t so much the case in this Ang Lee 2003 version. Eric Bana played Bruce Banner, but then, once transformed as Hulk, the CG character crafted by ILM had its very own look and feel.

After I suggested to Ang that he cast an actor as the Hulk that our team would reference, Ang replied at that the Hulk only existed in his mind. Recognizing that Ang was a good actor himself and always willing to act out what he wanted, I suggested getting Ang in a motion capture suit.

Robert Downey Jr. has of course become synonymous with his Tony Stark/Iron Man Marvel character. For many scenes over the series, the actor wore either a motion capture suit or more of a ‘faux’ gray tracking suit in order for the CG suit or parts of it to be realized. However, it was actually director Jon Favreau who wore a mocap suit for a Mark I scene (the first suit that Tony Stark builds) in which he punches an adversary. The Embassy produced the final visual effects for that sequence. 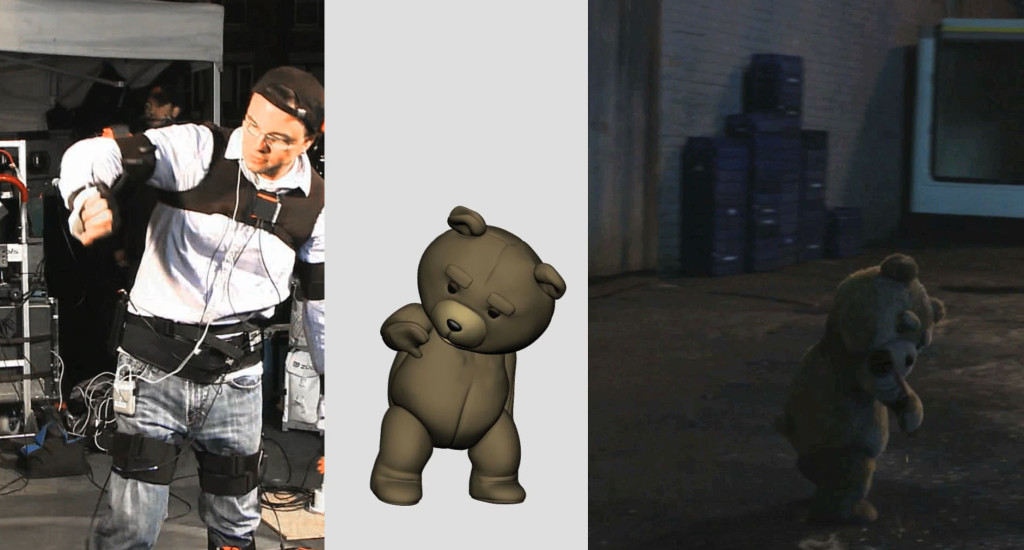 Seth MacFarlane was not only the director of Ted, he voiced the titular character, so it’s only natural he would wear the motion capture suit, too, for the CG bear. Interestingly, this was attempted as ‘live’ as possible, where MacFarlane put on an Xsens MVN set-up that allowed the director to be on the set with the actors or near them during the shoot. Tippett Studio and Iloura (now Method Studios) handled the final character animation. 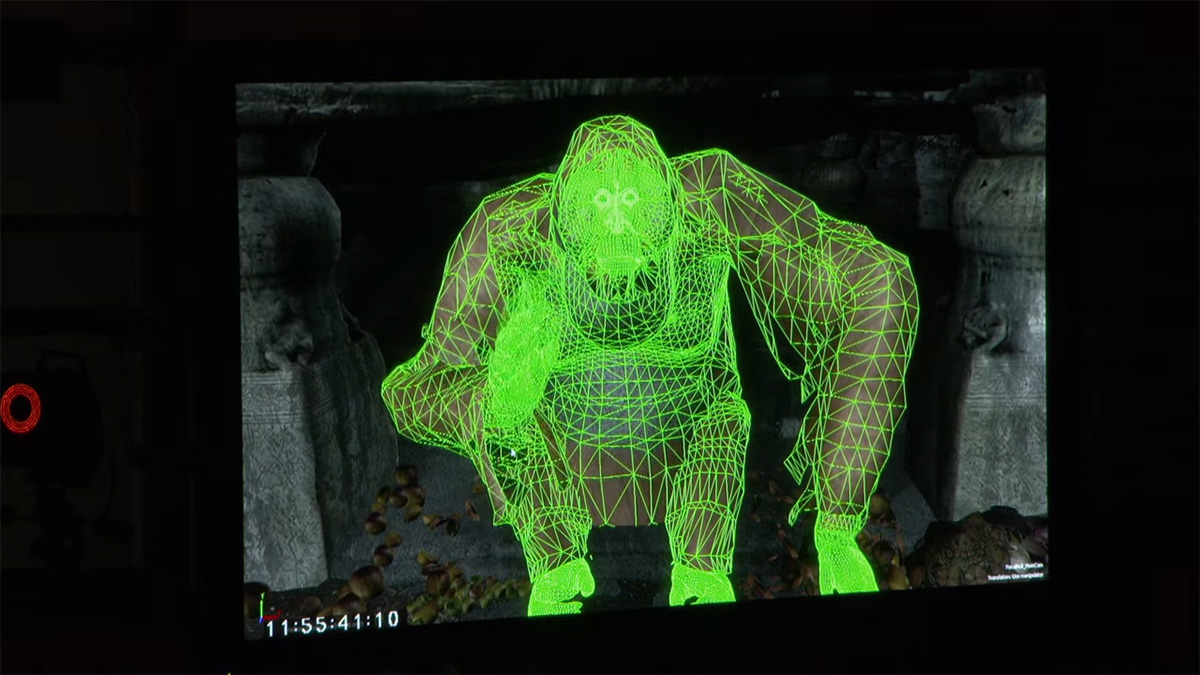 Jon Favreau is back, this time for The Jungle Book. In an interview with Little White Lies, the director mentioned the virtual production side of the production (including how scenes were actually planned out with mocap) and then that he, himself, “would do some motion capture stuff, say if I wanted to show how Baloo should move in a particular scene. For King Louie I actually put the motion capture suit on and acted everything out. The face is all Chris Walken, but the body movements are mostly me. It’s really a lot of fun.” MPC and Weta Digital were the main VFX studios on that show. 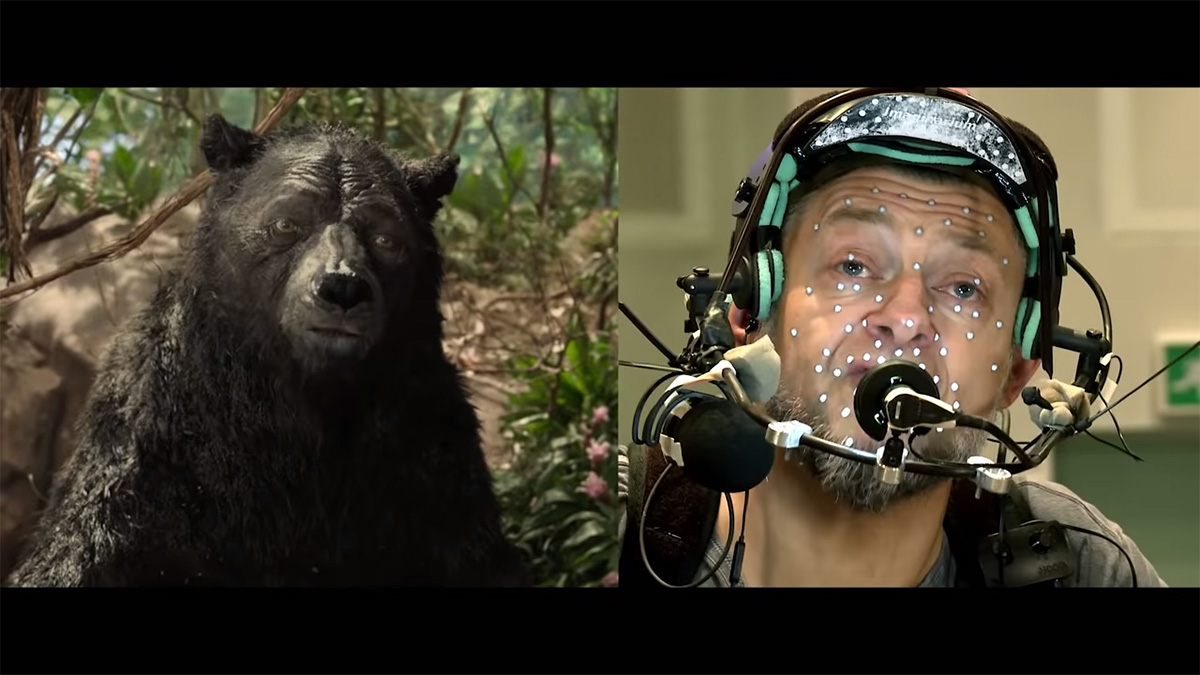 We all know that Andy Serkis has a deep relationship with motion capture, from Gollum to Snoke. As the director of Mowgli: Legend of the Jungle, and as the voice behind Baloo in the film, Serkis also had him and his actors performance captured (leaning heavily on the facial capture) to help create the speaking animals. Framestore led the visual effects effort here. 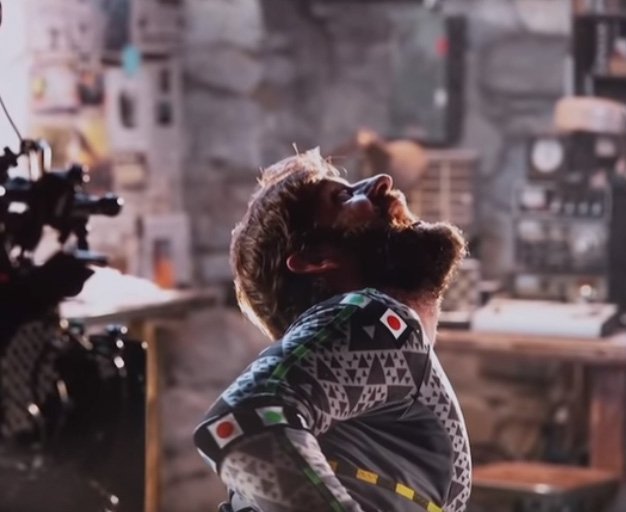 In the final scenes of John Krasinski’s A Quiet Place, the film’s monster terrorizes Emily Blunt’s character and her children in the flooded basement of their house. ILM would be crafting the creature in CG, but after discussing the scene with VFX supe Scott Farrar, Krasinski was convinced to wear one of the studio’s iMocap capture suits to play out the action, as he recounted to Business Insider: 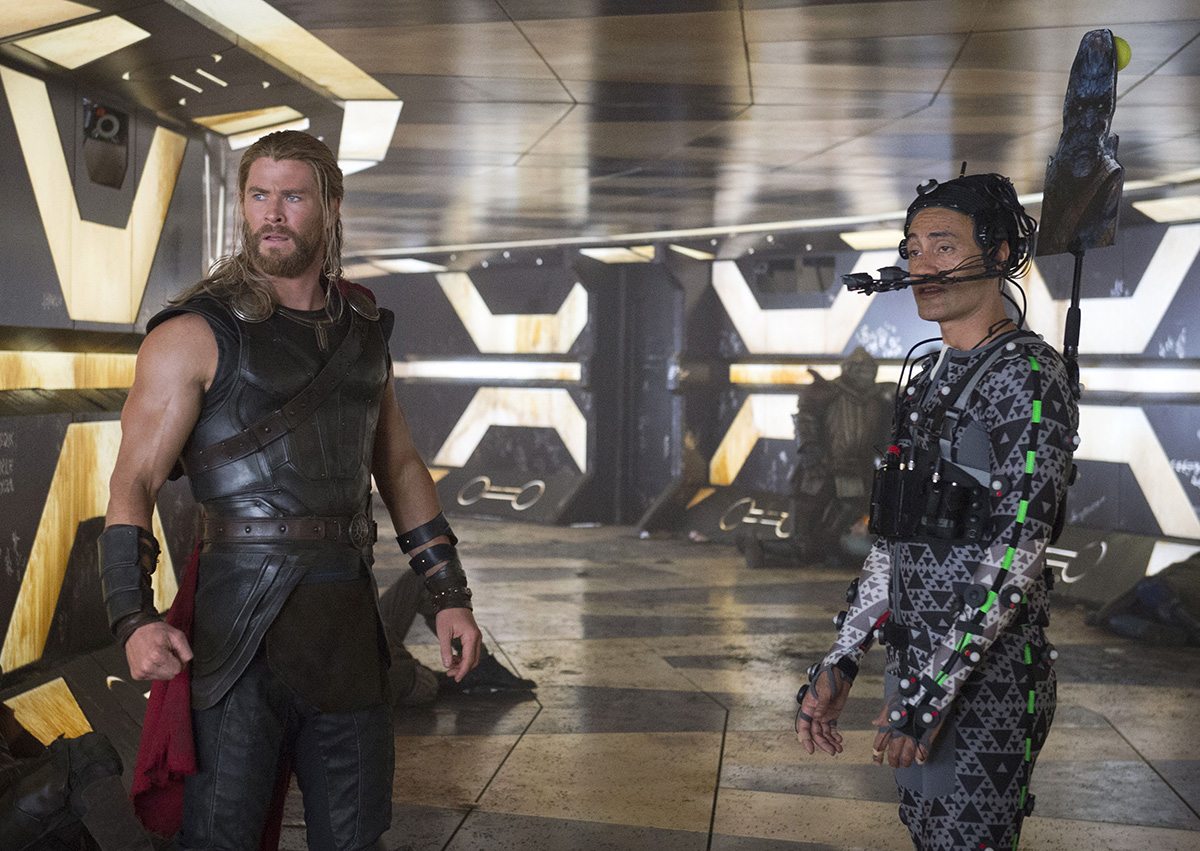 Inspired by nightclub bouncers, Taika Waititi’s alien Korg in Thor: Ragnarok was a scene-stealing character. The director donned a motion capture suit, sometimes with a backpack and extra cardboard head print-out for extra height, in scenes directly opposite the other actors, including Chris Hemsworth. VFX supe Jake Morrisson told me, for this Cartoon Brew article, “With the mocap of it all and the freedom to perform as someone who didn’t look like Taika Waititi, it was something that really interested him – the idea that you could actually disappear into the character.” Framestore and Luma Pictures shared Korg duties on the film.

The CG characters mentioned above are ones where the director put on a mocap suit of some sort to help define who the character was and how they might move and behave. But there are other examples from past films where the director’s actions and movements might also just have been videotaped and then replicated by animators. Take, for example, director James Gunn’s dancing baby Groot performance video for Guardians of the Galaxy Vol. 2 (something he also reportedly did in the first movie for its closing flowerpot dance).

Or there’s the live action videos (LAVs) done by Isle of Dogs’ Wes Anderson for the dogs in the film in which the director would film himself acting out the animals by miming the dialogue of the voice actor or crafting actions,  and then pass that along to stop-motion animators (animators, of course, are regularly known to film themselves for reference). 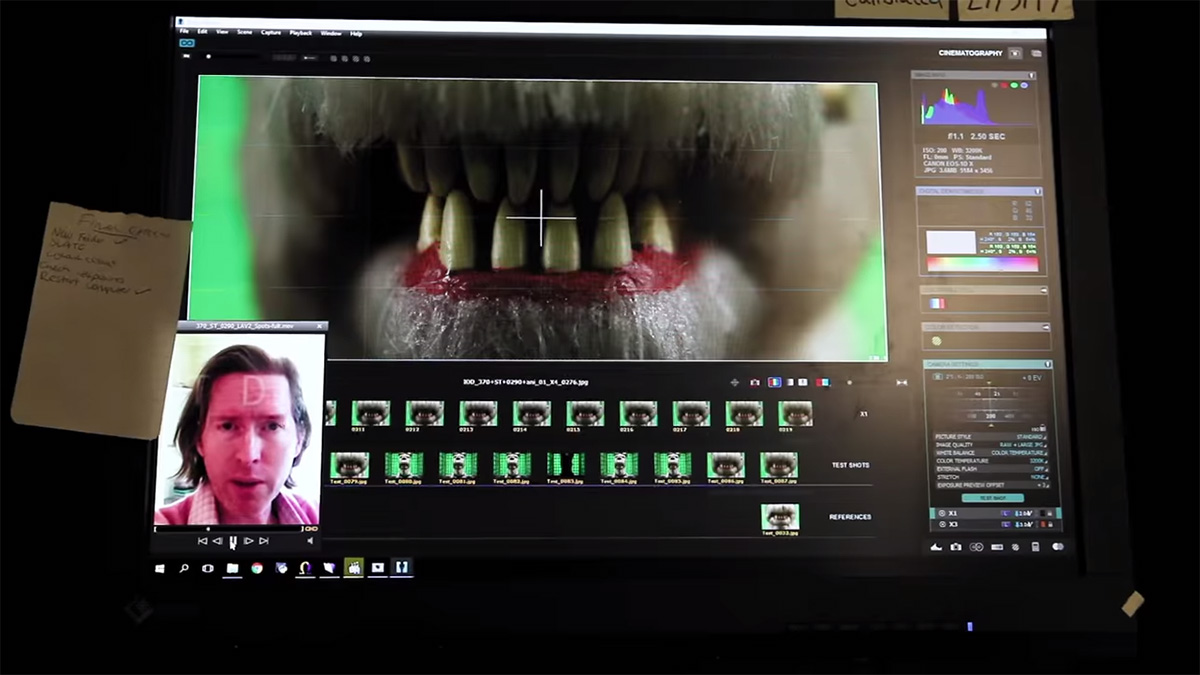 Do you have other examples of directors putting on motion capture suits, or driving performance with video reference? Let me know in the comments.