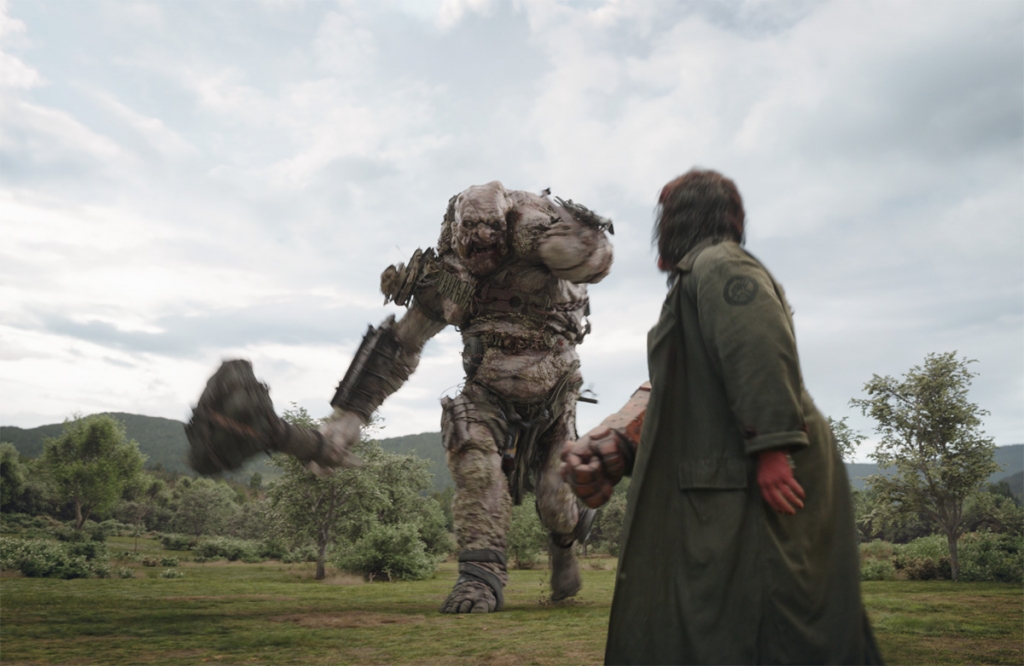 How Hellboy’s epic fight against 3 giants came to be.

One of the landmark scenes in Neil Marshall’s Hellboy reboot is the moment the titular character happens upon three giants, and ultimately defeats them.

Mr. X, Inc. handled visual effects for the sequence, which began life as a ‘oner’ and ultimately ended up with just a few cuts during Hellboy’s rampage.

With the Blu-ray for Hellboy now out, Mr. X visual effects supervisor James Cooper runs down for befores & afters what went into completing the scene.

James Cooper (Mr. X visual effects supervisor): It was quite an epic project and it was over a year in the making on Mr. X’s part. We were in early and doing previs and talking to the filmmaker about how to approach something as complex as Hellboy fighting three giants in what effectively wound up being a full CG environment.

Although, it wasn’t originally envisioned that way. They shot a lot of footage of Hellboy in a field, but then a lot of it was bluescreen’d, because they decided to change it up a little bit and turn it into a one-shot, which eventually wound up being more like a three-shot. But, it was shot specifically to piece together seamlessly into a single shot.

I came into it after we had started assets and started blocking, and the edit was in progress, but wasn’t final yet. Another Mr. X supervisor, Chris MacLean, was involved in the beginning in the creation of the assets and design.

On location and on bluescreen 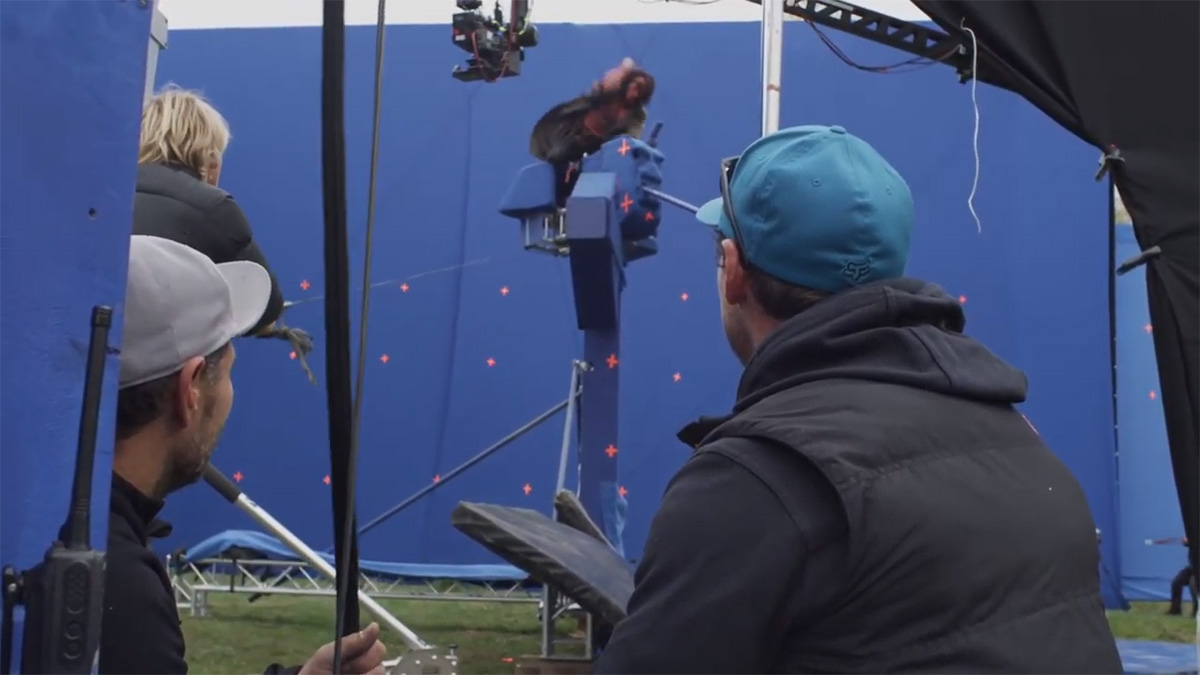 The initial opening shot where Hellboy crawls out of the river and pulls a blade out of his shoulder and then hears some noises behind them, turns around to see the giant sort of munching away on some humans – that was all shot on location. Then Hellboy spins around and confronts the third missing giant. From that point on, everything is CG except Hellboy and basically the patch of ground that he happens to be standing on at that time. They shot an initial bunch of stuff on location in Bulgaria, near the river.

And then there was a big exterior bluescreen setup, with a grassy field, and David Harbour and stunt guys basically fought against stunt guys in stilts and various different kinds of machines. There’s one scene where Hellboy jumps up onto the back of one of the giants. For that, there was a bluescreen gimbal machine that was created for him to jump up on top of and start smashing one of these giants in the head.

Effectively we picked Hellboy out of that, and then everything else – the environment, giants, weapons – are all CG from that point on. And it was pretty complicated because there was a lot of back and forth with editorial in terms of trying to use the giant elements to wipe screen and panning off Hellboy and then having him come in again, to create that one-shot look.

At one point, the Axe Giant has taken out the Sword Giant, and then the Club Giant steps up and, drives Hellboy off into the distance. At the moment of impact, Hellboy is taken over by a digital double and sent flying down into the landing.

It was all a very delicate dance of what was shot plates and what was a full CG Hellboy.

The same is true later on in the same giant fight after he winds up downing the Club Giant, the Axe Giant is coming after him, and he knocks him down, tackles him down and the Axe Giant gives him a swift kick that sends him flying through trees. Up until the point of the kick, it’s Hellboy on bluescreen. At the point of the kick, we take over him with a CG Hellboy, send them flying through the air and crashing through SpeedTree CG trees, sending branches flying and everything. Then he hits the ground and starts tumbling. And, at another point we take over on a stunt double tumble for Hellboy, and once again in the bluescreen field environment.

We had a photogrammetry scan of David Harbour and built a full CG Hellboy. However, he was never meant to be hero. He was only ever really meant to be used in those transitional points. But at a certain point we realized that there were going to be at least three or four other shots in the film where we had to get pretty hero with him. So we basically had to take our initial non-hero Hellboy model and upgraded it into a full hero Hellboy that would hold water on the big screen.

We didn’t have any photogrammetry of the set, per se, we had Lidar scans of the general bluescreen set, but that was used more for tracking purposes. When we got into creating the giant environment, it was effectively created from scratch using photo references and the live action plates that were shot of the location in Bulgaria. So we had a general lay of the land out there, and we knew what kind of vegetation was there. And we matched into that pretty exactly, and used a high-res digital photographs of the environment to create digital matte paintings for the distant hills.

Then we created a humongous full 360 degree field with trees and everything for the giant fight to take place in. It was actually so large that we couldn’t open the scene in at any one time. It had to be relative to where the camera was pointing because there were just so many polys involved that it was too immense to load in all at the same time. But because we were constantly whip-panning around with the camera to judge where the fight was happening, that kind of worked for us in terms of our lighting setup and rendering. 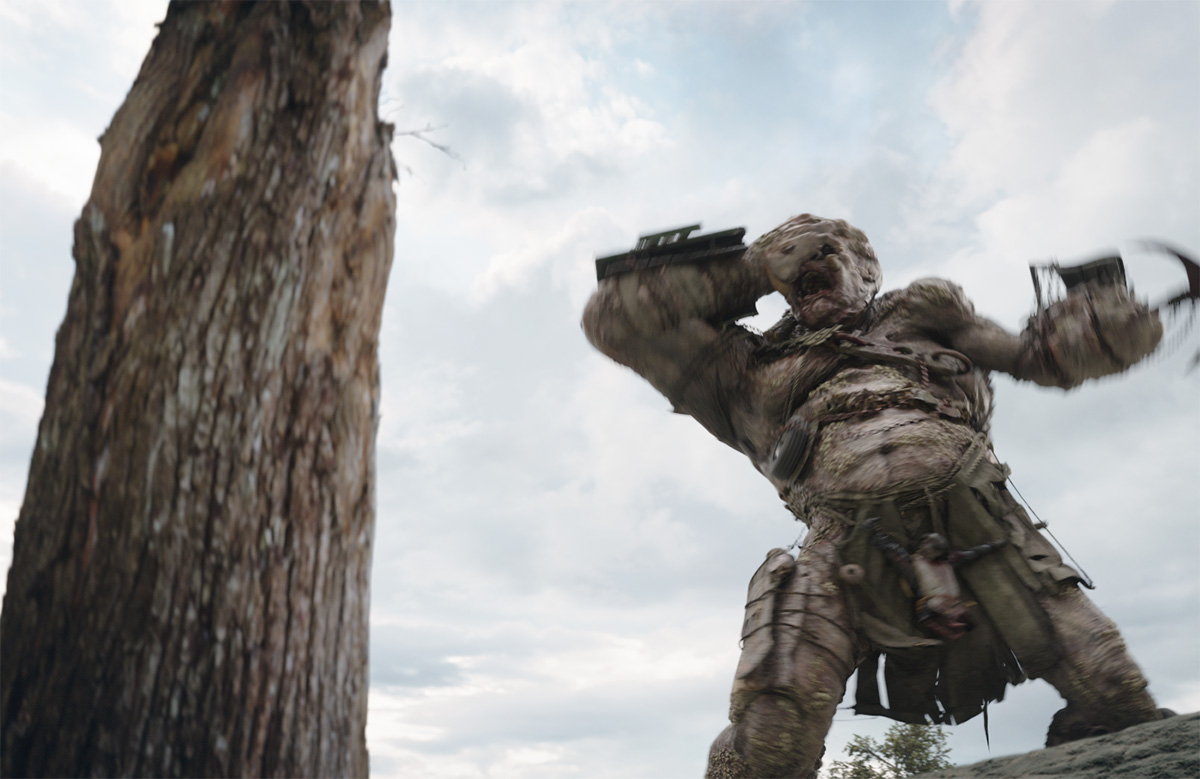 We paid particular attention to physics, trying to understand how a 20-foot tall creature would react to gravity versus a six-foot Hellboy. It took a while with a lot of experimentation and R&D before we hit upon the idea that we would do some motion capture, but we would do it at double speed and slow it down in animation, as if we were shooting it at 96 frames per second. And that gave everything this sort of lumbering quality that we felt added that sense of weight and gravity that the giants really needed. So that was a bit of a breakthrough for us, when we hit upon that idea. And that was our animation director, Kevin Scott – he hit upon that idea and it was a brilliant idea, and worked perfectly in terms of creating that sense of gravity and weight for the giants.

Beyond that, our creature development team, headed then by Fabio Bonvicini, was really on top of the fat and musculature of the creatures and making sure in particular with the giants that we we paid particular attention to the nature of muscle and fat. Ziva was a fantastic tool for us on this, and really got us a large portion of the way there. In particular with fat simulation, and everything, but we also got into some hand-sculpting of musculature and using that to really define different muscles and muscle groups when they were coming into play.

And then it was finessing with comp and lighting and rendering and making sure that all of the subsurface work that was developed through our lighters, led by Ben King and Alexandre Scott who really brought all of that out and made them come to life.

On being a oner, sort of

It stayed as a oner for quite a long time, and realistically is still almost entirely a one-shot deal. I think it was when the Club Giant goes down, that was a natural cut point because then we cut to some reactions of Hellboy with the Club Giant, dropping down as he gets impaled on a tree. Then what happened was, when the Club Giant golfs him off into the distance, originally we zoomed along with him and we see him hit the ground. And then the cameras sort of sped over there and did a 360 around him, as he got up.

But they decided ultimately that it was just taking too much time to get over there – him having been punted so far that it was taking a little bit too much time editorially to get there. So that was when the decision was made that, okay, we’re going to put another cut in here. But ultimately, that whole section wound up being in the neighbourhood of about 95 seconds, which is a hugely long shot for visual effects, especially considering that it’s entirely CG with a massive environment and three huge creatures in it.

Internally we worked sections of the shot, and broke those down into individual shots because it was impossible logistically, with data management and everything else just to try and do that all as one shot which just was virtually impossible. So we broke it down into segments that with a transition point in-between them, that we could work on, and not have everything grind to a halt. Ultimately we broke those down into about seven or eight different shots, that were effectively segments of the oner. And then we would just work those individually and then string them together, and there was always this transition point in-between where we’d have some overlap from one shot to the next transition, into the different renders.