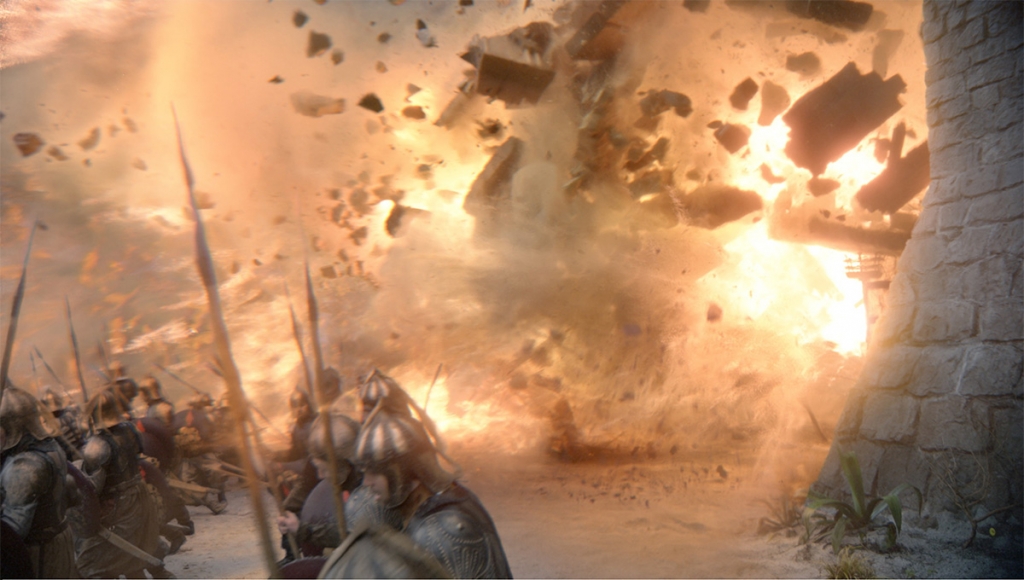 In episode five of the final season of Game of Thrones, soldiers waiting at King’s Landing gate are suddenly met with a fiery explosion as Drogon blasts the area. Visual effects for the sequence were handled by Scanline, which took plate photography and even a miniature explosion and added its own Flowline simulations for the huge fireball and destruction.

In this article, Scanline visual effects supervisor Mohsen Mousavi, who will be part of a production session at SIGGRAPH detailing the work in season eight of Game of Thrones, outlines how they King’s Landing gate shots were done. 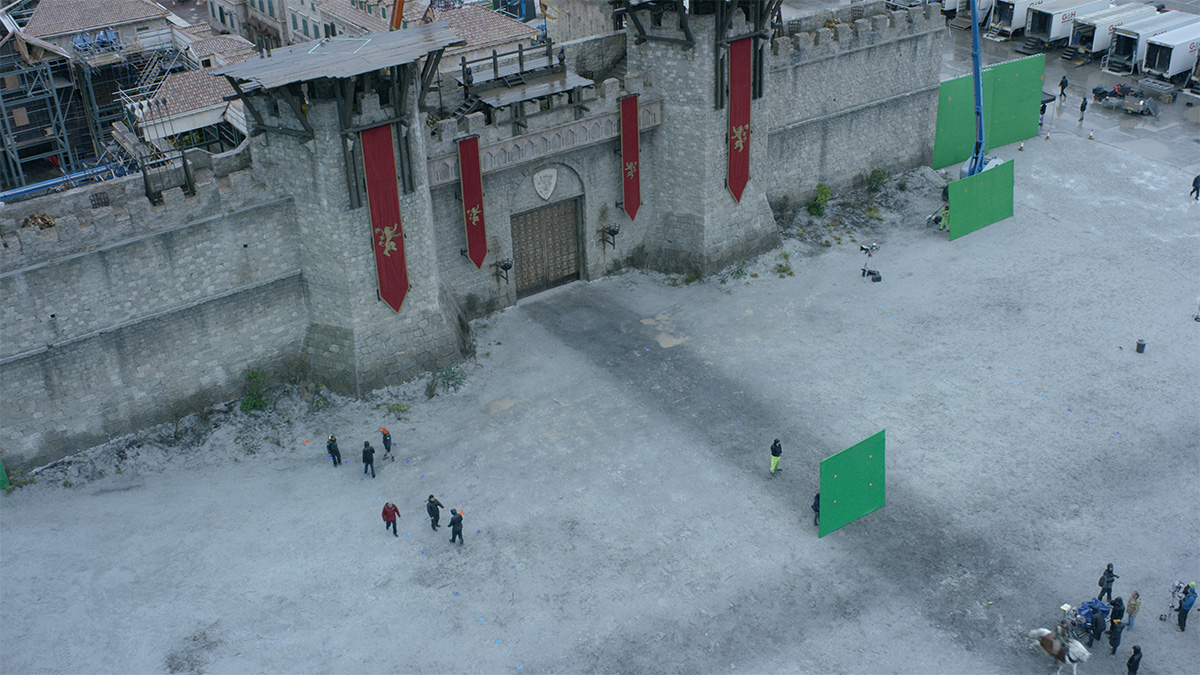 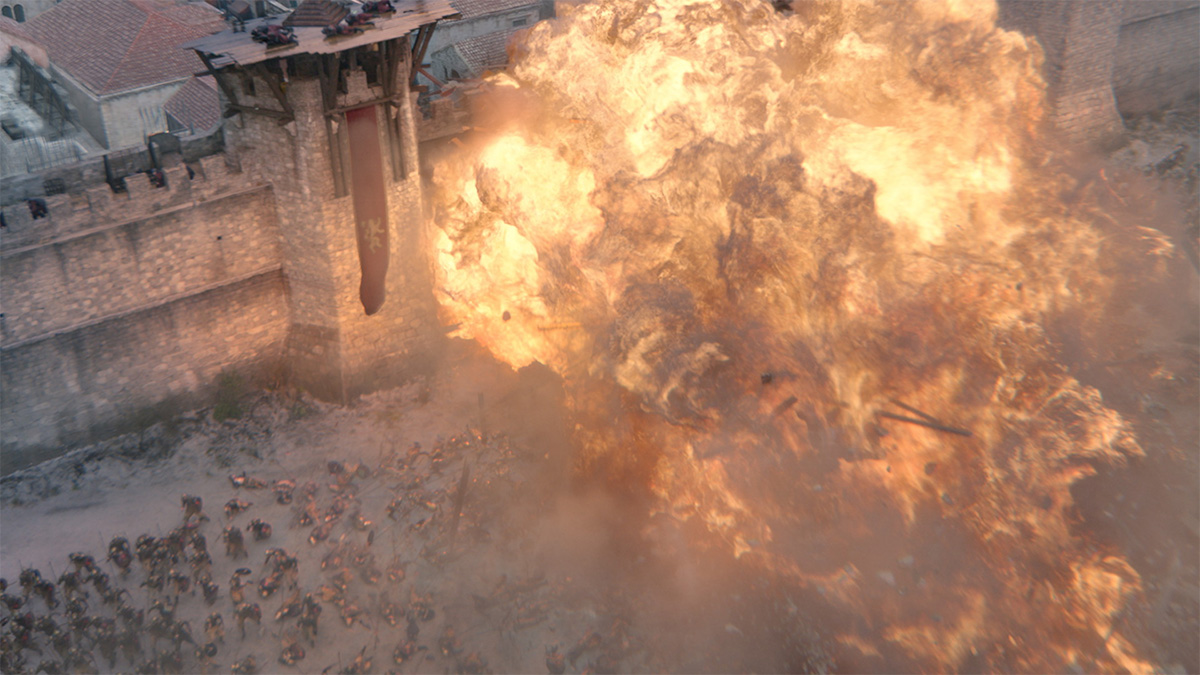 Starting with miniature effects: For the gate explosion, they tried really hard to get something that we could work with as a base. So they built a third scale miniature in Belfast of the entire set. And they had once chance of blowing it up. And they did that, and they shot it from five different angles. It became tricky, because when they planned it, it was meant to be more of a fiery event, but it ended up being more of a debris event, with a lot of dust.

Trying a simulation: We did a bunch of tests with the miniature to add fire, but eventually we suggested a test of doing a simulation of the entire gate collapsing and exploding and doing it entirely in CG. We did this test over a weekend, and they were very pleased. For the sake of getting something that works, and for the sake of the budget and the time, we tried to do one simulation that we could then basically shoot from different angles in terms of the camera. So we did one long simulation, and we showed all the five shots at once to Joe, and he was very pleased with it. It was entirely simulated in Flowline as a massive big fireball that comes out, including all the stones ripping apart and the wall collapsing, and all the debris shooting towards the characters. 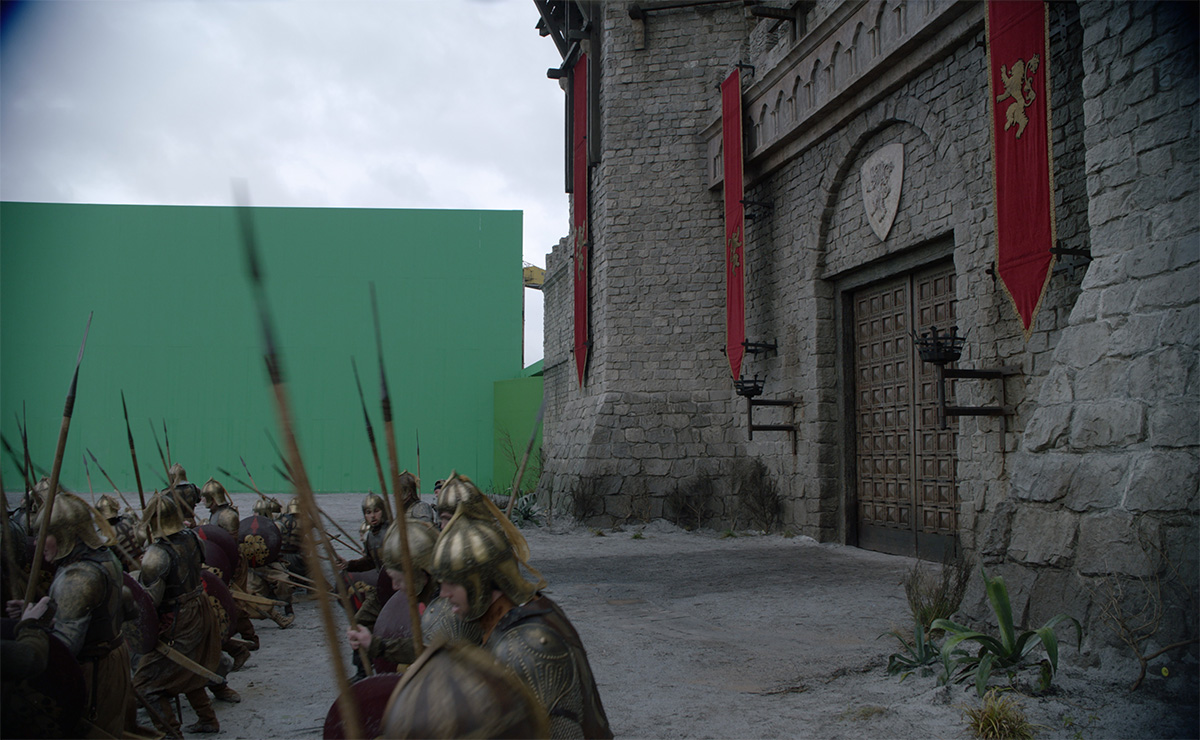 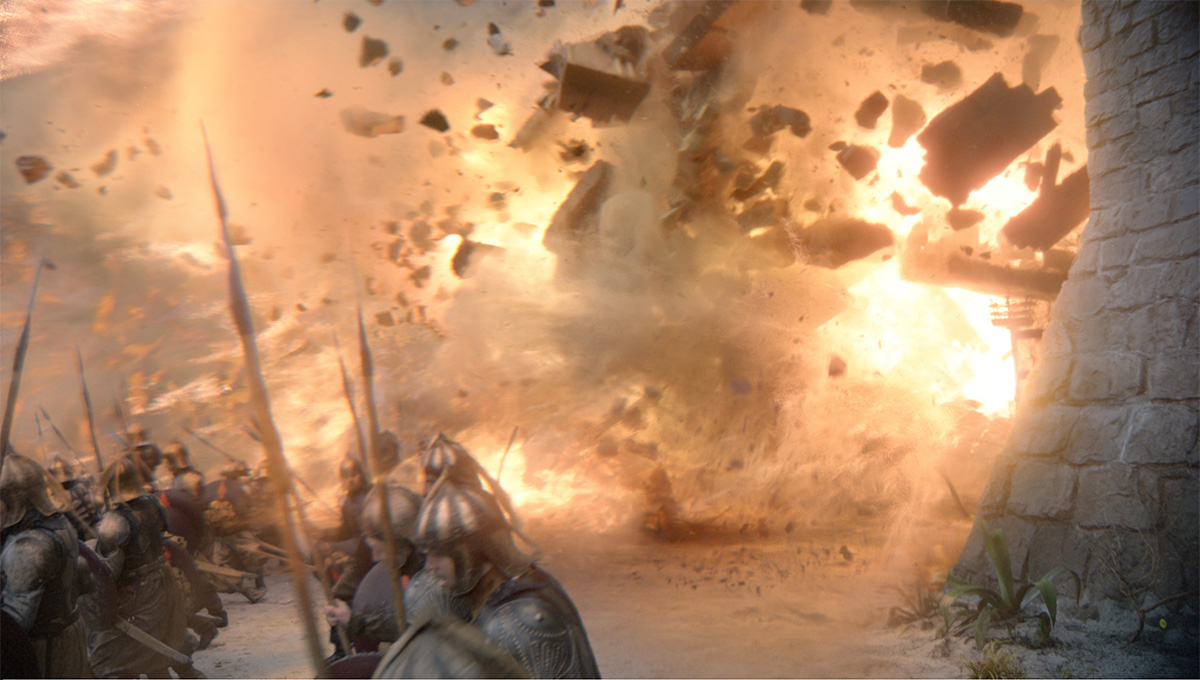 How to simulate a huge explosion: With fire and explosions, you’re obviously a bit limited to the physics of the fire, but at the same time you want to art direct it, and you want to be able to make it look cool, and then at the same time sort of cater it editorially of how far the fire should be at the end of this shot, so that sort of makes sense in the story flow. That’s what Flowline excels at because at its very core, Flowline is a simulation package. And it is very similar at its very core to many other simulation packages in the sense that you do a lot of your sort of attributes in terms of gravity and heat and temperature and viscosity, all of that, and pressure of the air, and you basically tweak the parameters and adjust to be able to get something interesting. 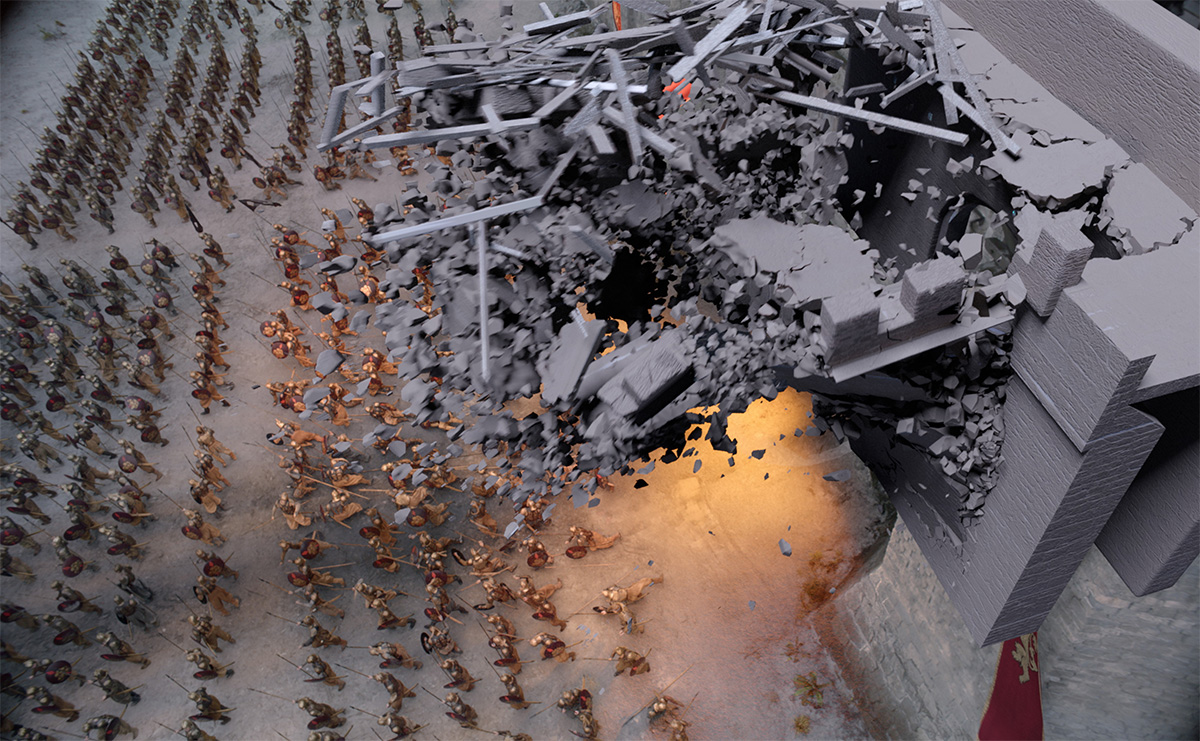 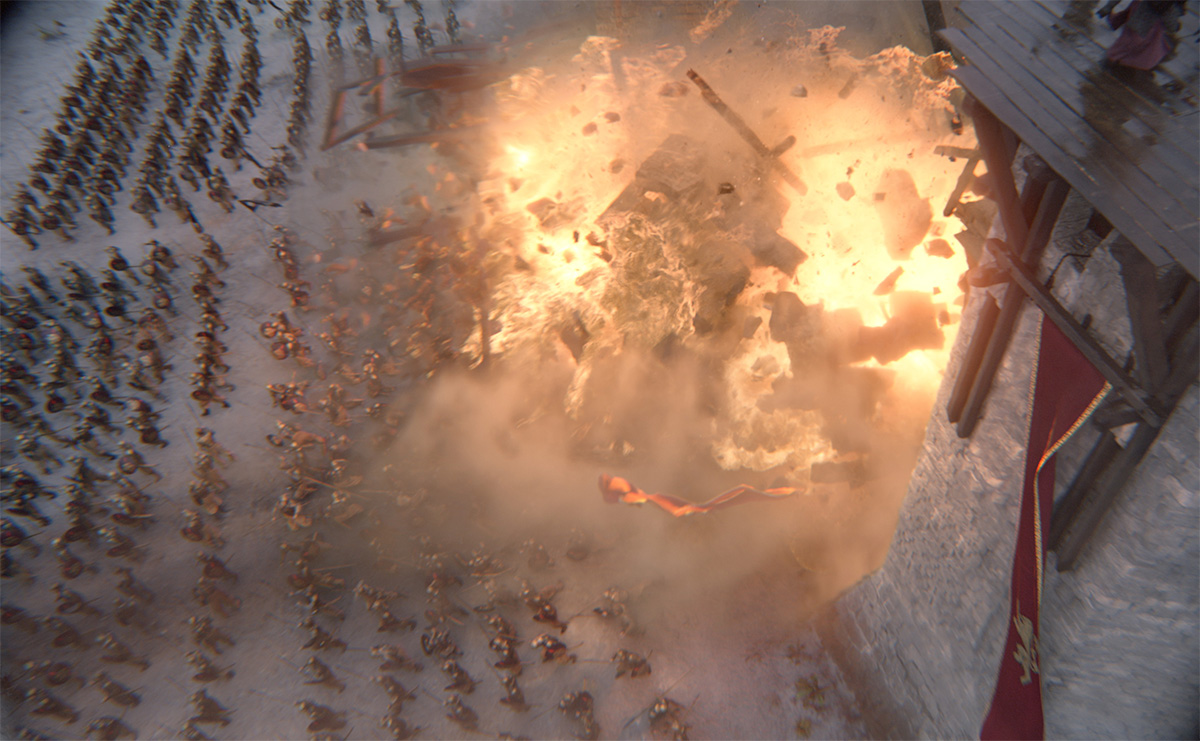 Picking the right sim: But what really excels in Flowline is that because of the massive infrastructure that we have built at the scale line for doing parallel simulations and doing a lot of it at once, we were able to do a lot of simulations at once. We would be able to test overnight and look at them all in the morning, and pick the three that worked out the best, and then sort of branch from there, and do another ten, based on those three, over the next one day and then pick another two, and narrow it down. This is versus the classic scenario where you wait for an entire night for a simulation, and then you wait another three days for lighting it and rendering it. And then you have to spend a whole week with a lot of pain with only one version available to you, which reduces the options. 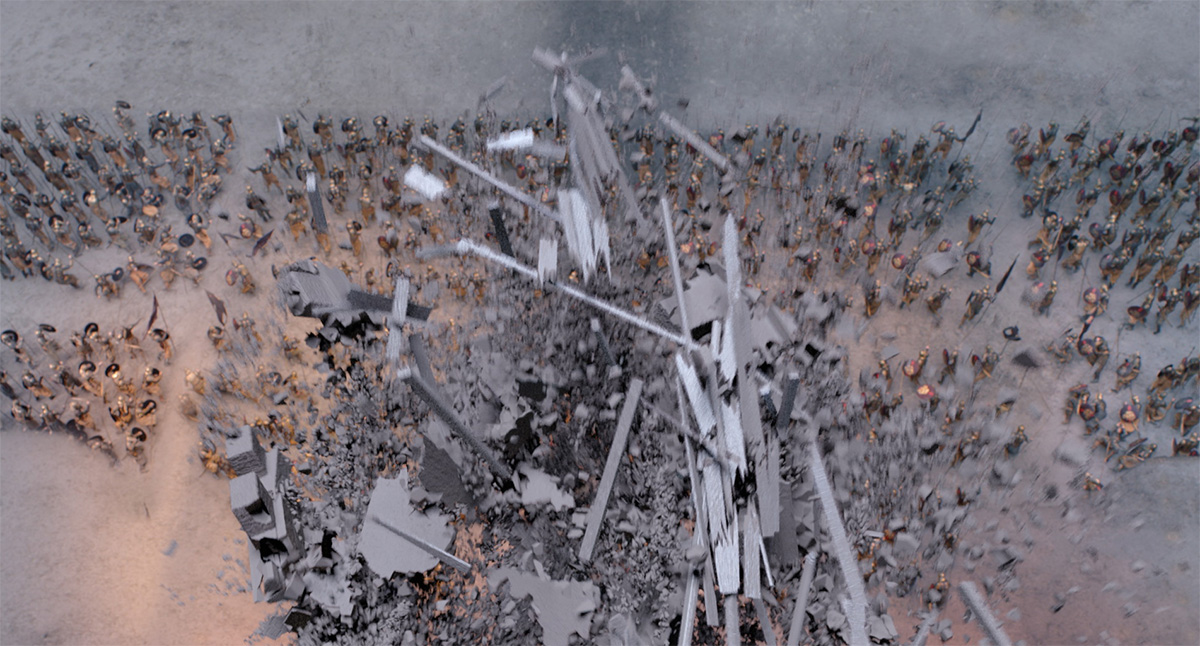 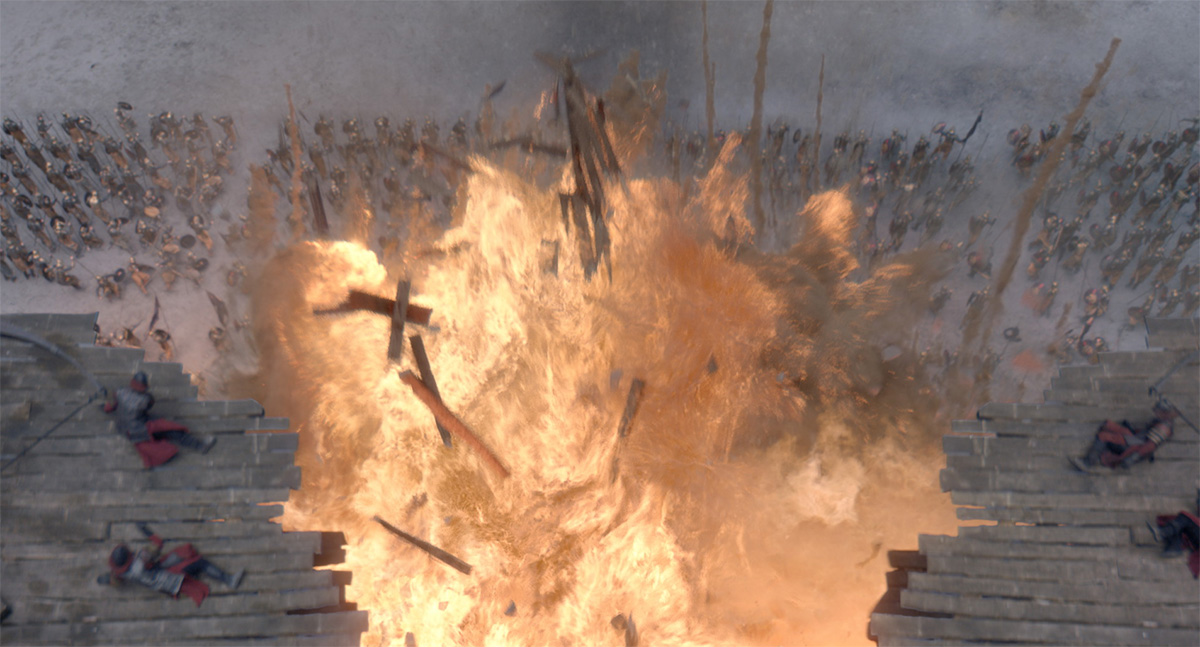 One of the hardest explosions so far: In terms of all the fire explosions that I have been personally involved in, in the past years, this was the toughest because it is really easy for Scanline to do a big massive fire explosion that looks cool, but it’s also very easy to make it look fantastical. But to get it to look real, like something from a documentary, then we’d have to go the extra mileage of tweaking some of the core tools that we have in Flowline, adjust and actually re-write part of the software to mimic some of the attributes of real fire.